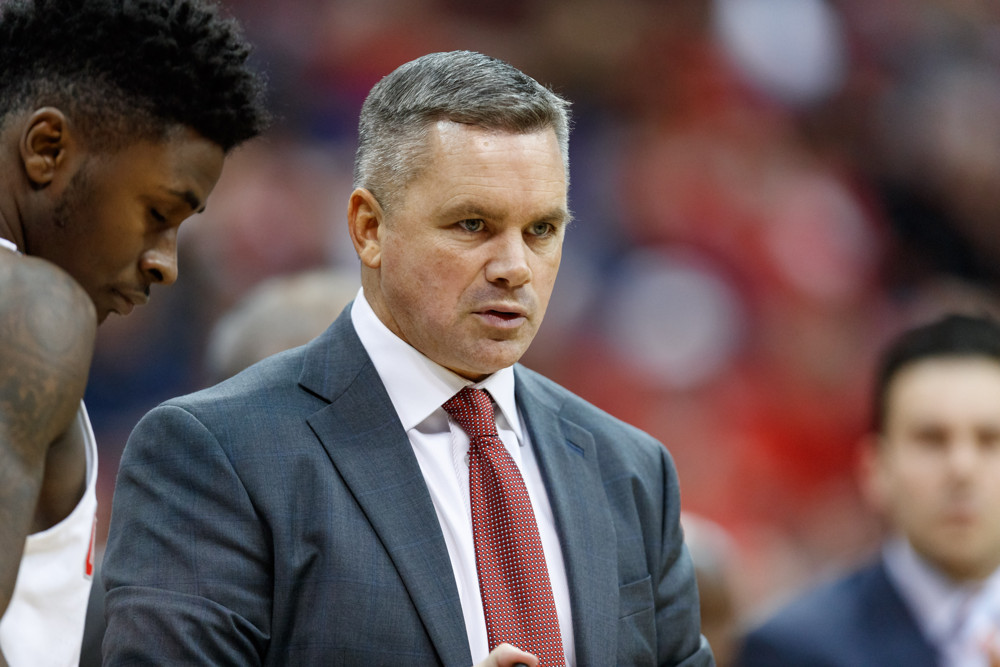 From the ACC’s hiccups to Chicago State winning its first game in over 700 days, here are the biggest takeaways from opening night in college basketball.

It was an eventful day in college basketball on Tuesday with 120 matchups between D-1 teams to tip off the season.

The Heat Check CBB staff is back with a special roundtable to discuss the biggest storylines from the Day 1 action.

Best player: Villanova’s supporting cast around Collin Gillespie will decide how far the Wildcats go this season, and Justin Moore was electric with a 27-point showcase against Mount St. Mary’s. He was scorching from deep and recorded seven assists without a single turnover.

Best game: No. 17 Ohio State needed every drop of fuel in the tank to sneak past Akron. A ridiculous 4-point play by Akron’s Ali Ali looked like the decider until a blown defensive assignment allowed OSU’s Zed Key to drop in the game-winning basket.

Biggest takeaway: Outside of Duke, the ACC is off to an embarrassing start to the college basketball season. The Citadel crushed Pitt, Miami Ohio topped Georgia Tech and Navy upset No. 25 Virginia for its first top-25 win since David Robinson. The ACC’s depth has been questioned in recent years and the early returns aren’t promising.

Best player: Paolo Banchero was the most impressive, but Trevor Keels becoming a real offensive force for Duke was unexpected and necessary. He gave the Blue Devils a needed secondary scorer and his defense on TyTy Washington was spectacular.

Best game: Houston’s overtime win over Hofstra. The Cougars struggled and trailed by as many as 13 points before rallying behind guard Marcus Sasser.

Biggest takeaway: Ohio State’s backcourt is going to be an issue. Duane Washington’s departure left a gaping hole in OSU’s perimeter production and no one stepped in to replace it. Their guards scored 15 combined points on 4-of-17 shooting — it’s why the Buckeyes almost lost to Akron and could be an Achilles’ heel moving forward.

Best player: Toni Rocak, baby! The Swiss forward from UC San Diego went nuts against Cal in the first “upset” of the season. Rocak scored 27 points on 8-for-12 shooting while netting a ridiculous 40-percent usage rate after leading the nation in that stat last year.

Best game: Chicago State’s win over St. Thomas. While D-1’s newest team taking on one of its most ridiculed may not seem like a recipe for high-quality basketball, the Cougars and Tommies played a tight game. After going 0-9 last year, CSU won for the first time since December 2019.

Biggest takeaway: UAB clicked on all cylinders against UNC Asheville, but their offensive outburst of 102 points really jumped out. In particular, transfer Jordan Walker scoring 19 points while knocking down three of four 3-pointers is a sign that the Blazers’ offense could catch up with its already stout defense. If the scorers stay hot, the C-USA will be UAB’s for the taking.

Best player: Andy stole mine, and I blame my tweet about Rocak. So I am going to go with a player I have quietly been viewing as a dark-horse All-American candidate: Ochai Agbaji. He had a career-high in scoring on the sport’s biggest opening night stage, and proved to my eye that he can be the engine behind Kansas’ offense.

Best game: Cal State Fullerton vs. Santa Clara had everything you could have asked for out of a regional mid-major matchup. It had a ton of scoring, a one-point difference with five minutes remaining, and a star performance from Josip Vrankic. It probably wasn’t viewed by anyone outside of California, but it was a solid side-screen watch.

Biggest takeaway: While almost every major conference had a tough game or two on opening day, the Pac-12’s struggles stuck out as lasting. Arizona State and Stanford don’t have any depth in their offensive attack, Washington and Cal were as bad as we all knew they would be, and Colorado had a defense that looked very unlike Tad Boyle defenses of the past.

Best player: Jason Roche walked into the Petersen Events Center and went 8-of-14 from three. The 6-5 freshman’s 27 points helped lead The Citadel to a 78-63 road win over Pittsburgh. Not a bad showing for Roche in his first college basketball game.

Best game: Duke and Kentucky, because we were able to gauge talent against talent. I have been higher on Duke than most throughout the offseason and the Blue Devils’ performance Tuesday night confirmed much of what I anticipated heading into the primetime matchup.

Biggest takeaway: We should not give teams a pass because of their coach, as talent and cohesion are just as important. I’m looking directly at Virginia — Jayden Gardner, Kadin Shedrick, Reece Beekman, Armaan Franklin and Kihei Clark is simply not a Top 25 starting lineup as of right now. Even with Tony Bennett being one of the best coaches in basketball, the talent is lacking.