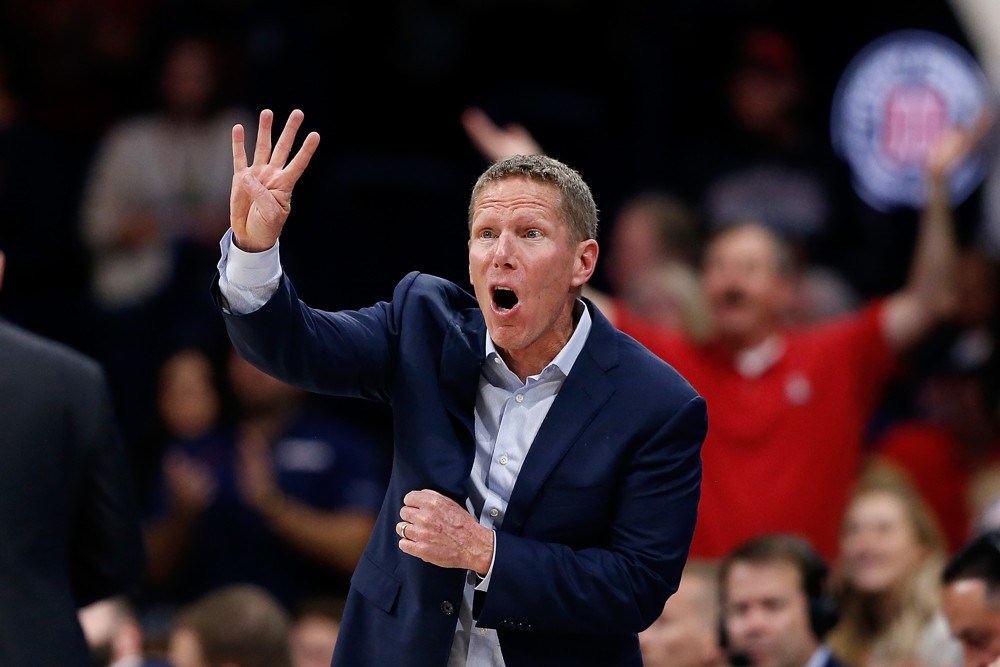 After a devastating loss in April’s national championship game, Gonzaga basketball has its sights set on redempton.

Don’t let a blowout loss in the title game deceive you.

Last year’s Gonzaga basketball team was special, nay, transcendent. Sure, the Baylor buzzsaw chopped the Zags into lumber. But giving too much attention to that contest overshadows their near-achievement of perfection. Remember, it’s not like “they didn’t play anybody.” Gonzaga wiped the floor with Iowa, Kansas and Virginia in the nonconference then won its first four tournament games by an average of 23.3 points.

Still, you may wonder, how can Mark Few and the Zags rebound from such a demoralizing defeat? Well, returning their best player and bringing in the highest-rated recruit in program history make for a great start.

Yes, Gonzaga will rely upon its heroic frontcourt to sustain last season’s success. Few runs a modernized inside-out offense that gives big men plenty of touches, and Drew Timme will again be the primary benefactor.

The junior forward erupted last season, blossoming into the most devastating post scorer in the country. Timme shows off a variety of moves in the paint — he scores out of iso in the mid-post, spins off of defenders in the low-post, and always baits his opposition with perfectly-timed pump fakes. But he isn’t pigeonholed into an old-school big man archetype. Timme can also grab-and-go, make plays out of DHOs, and attack the basket from the top of the key.

Also, he strikes me as the type of guy who will thrive off getting booed in full arenas. Equipped with his headband and mustache celly, Timme likely hears plenty of jeers from opposing fans this season. Yet as he garners all the hate, he will also garner plenty of National Player of the Year consideration.

But oddly enough, Timme might not even be the best player in the Gonzaga basketball frontcourt. Because a certain 7-0 Pegasus with a string cheese frame looks ready to live up to the hype. Chet Holmgren, the aforementioned highest-rated recruit, provides a skillset as awe-inspiring as it is unorthodox.

The rookie showcases an advanced handle for a 7-footer. Few will maximize this trait, calling on him to lead the break and create off the bounce. Holmgren also exhibits a top-notch feel for the game, leaving little doubt that he can initiate the offense. Note the following clip, where he nails a live-dribble, no-look pass in the halfcourt:

His jump shot looks equally as impressive as his ballhandling. Chet displays gorgeous form knocking down trey balls off of pick-and-pops and off the dribble. I’m not saying he’s the next Durant or anything, but watching this two-dribble pull-up 3, it’s easy to see KD’s influence on his game:

Finally, Holmgren will make a trajectory-altering impact on Zags’ defense. Using his otherworldly wingspan and immaculate instincts, the rookie blocks shot at an elite — and I mean elite — level. In addition, Chet moves his feet well on the perimeter, standing his ground on switches. His well-rounded defense should help mask any of Timme’s issues on that end. (Which, speaking of, have been overblown due to the Baylor game. For instance, just look two games earlier in the Elite Eight, where he did an admirable job containing Evan Mobley.)

I really could end the deep dive right here. These two alone could make any team a title contender.

But Gonzaga’s gifted backcourt only enhances its season outlook. Senior Andrew Nembhard will run the show after occupying an ancillary role last season. Limited usage notwithstanding, the metrics show his positive effect on the offense:

A certified dimer, the 6-5 Canadian excels at probing defenses and finding the open man. Plus, his proficiency in the open court should help Gonzaga maintain its deadly transition attack. Two stats of note from last season: 1) Per Hoop-Math, the Zags ranked fourth nationally in percentage of initial field-goal attempts in transition. 2) They ranked first nationally in transition effective field-goal percentage. Talk about efficiency.

Only one question surrounds Nembhard, and really, the backcourt as a whole: can anyone emerge as a consistent shooter? Freshman guard Nolan Hickman will eventually start, but like the vet, he, too, has a streaky jumper. However, I’m optimistic regarding his development. Hickman shines at creating separation, so when his 3-point shot is on, it’s a beautiful sight to see. Clips like the one below make me think that he will be a first-round draft pick this summer:

While Hickman gets seasoned, Iowa State transfer Rasir Bolton will hold down the second backcourt slot. In normal circumstances, I would be bullish on a big-stat guy from a 2-win team. But Few receives the benefit of the doubt after working his magic on so many transfers. And let’s be real, the coach could do worse than a proven Big 12 scorer with solid playmaking acumen.

Turning to the wing, Julian Strawther likely gets the first crack at replacing Corey Kispert. Though inexperienced, the 6-7 forward brandishes a silky shot and explosiveness at the basket. After a year in the program, a sophomore breakout could be on the horizon.

Beyond the starters, Gonzaga basketball also possesses some interesting bench pieces. In the frontcourt, junior Anton Watson gives Few an ace defender off the pine. Top-60 freshman Kaden Perry, a player known for his motor and his bounciness, also adds depth to the post rotation. Then, in the backcourt, McDonald’s All-American Hunter Sallis teems with long-term upside. His five-star pedigree seems based on future projections, so Gonzaga fans may have to be patient. But hopefully, the hyper-athletic guard finds consistent minutes by the postseason.

And that’s the ultimate goal anyway— playing well into March and into that first week of April. The two national championship appearances are nice. But for this year’s squad, it’s the ultimate prize or bust. Perhaps, for Few, the third time is the charm.