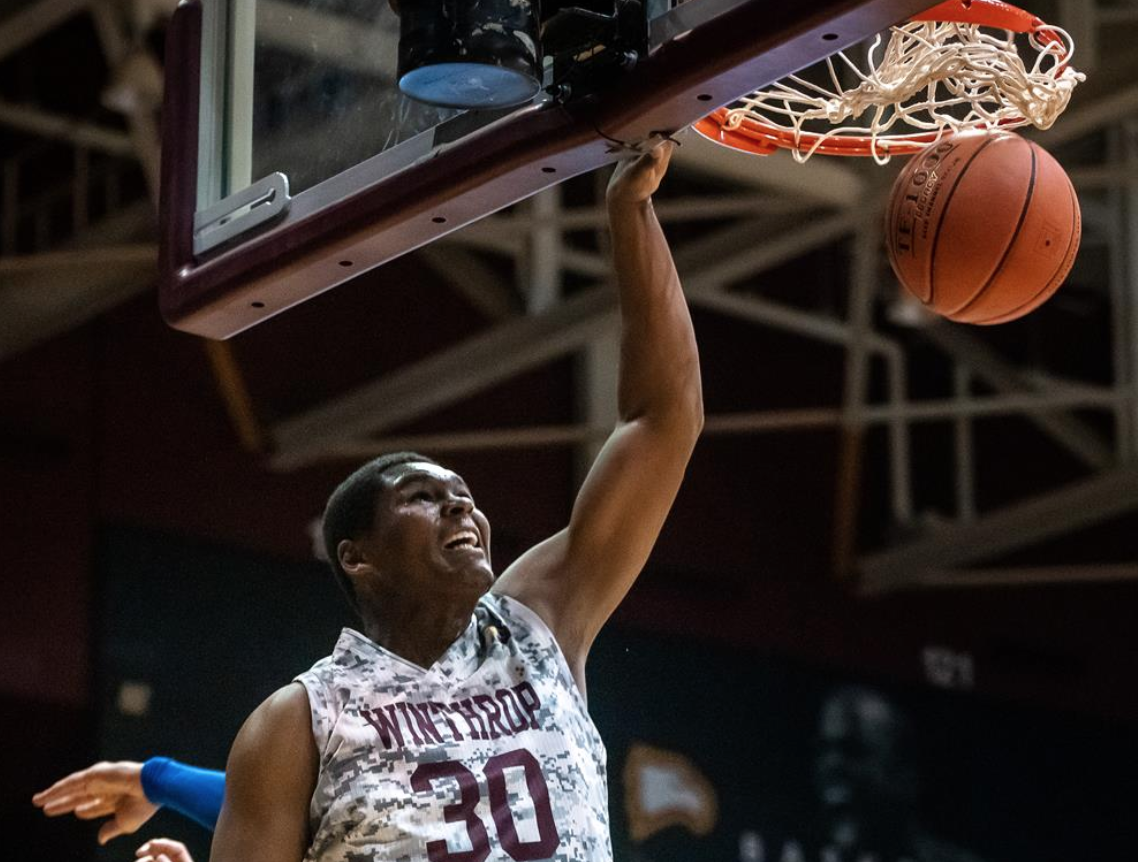 Shaw’s Sleepers: Winthrop’s DJ Burns has the makings of a dominant big man

In this latest edition of Shaw’s Sleepers, Jamie Shaw analyzes Winthrop junior big man DJ Burns, one of the top players in the Big South.

When the Big South Conference announced its awards during their media day, DJ Burns’ name was at the top of the list. The league’s head coaches and media voted him the Big South Preseason Player of the Year.

Player of the Year is a big jump for the 6-9 and 275-pound redshirt junior. He was named all-league honorable mention last season after averaging 10.1 points and 3.4 rebounds per game on 58.2-percent shooting from the floor.

Those numbers are not eye-popping; however, his counting numbers do not tell the whole story.

Burns only played in 15.7 minutes per game last season, one of Winthrop’s 11 players who averaged 10-plus minutes per game. His per-40 numbers, however, display stellar averages of 25.8 points and 8.6 rebounds.

How did we get here?

DJ Burns was a coveted prospect coming out of Rock Hill (S.C.) York Prep. He chose Tennessee over Auburn, South Carolina, LSU, Georgia Tech, Oklahoma State and others. After a redshirt year at Tennessee, Burns decided to transfer, coming home to Winthrop.

In his two seasons with the Eagles, Burns has played a major role in the program’s 47 victories and pair of NCAA Tournament bids. Now entering his redshirt-junior season, Burns is looking to take the next step as one of the Big South’s stars.

Burns is as offensively gifted as any big in the country. Per Synergy, 89.7 percent of Burns’ points last season came in the halfcourt. He scored one point per possession in that setting and was graded as ‘excellent’ by the metrics.

Burns joined Luka Garza, Kofi Cockburn and Zach Edey as one of only 13 players in D-1 last season to have an offensive rating above 114, a player efficiency rating above 26, and a usage percentage above 28. He proved to be an especially efficient post scorer despite a heavy workload on the floor.

The defensive side of the floor is where the question marks arrive. Burns was put into pick-and-roll situations in 26 percent of his defensive possessions where he guarded the roll man. Synergy graded Burns in the 29th percentile, giving up 1.04 points per possession. This type of defense is where Burns has to tighten things up the most. If teams can spread Winthrop out and Burns is a liability in the pick and roll, he could be unplayable at times.

The defensive chops are there. Burns was ‘good’ when defending isolation situations, ‘very good’ in closing out shooters, and was ‘average’ defending the post, according to Synergy. He has defensive upside but needs to show more consistency overall.

After nine seasons in Rock Hill, head coach Pat Kelsey left Winthrop for College of Charleston. The Eagles hired Western Carolina head coach and former Winthrop assistant Mark Prosser to take over. Even despite the coaching change and offseason NBA Draft declaration, Burns decided to stay put for another season.

At WCU, Prosser’s 6-7, 270-pound lefty Carlos Dotson was named First Team All-SoCon in 2019-20 after averaging 25.5 points and 9.7 rebounds per game. There has been a precedence set with big men under Prosser’s leadership.

While Burns has yet to have a full-on breakout, watch closely. This Winthrop squad is on the verge of big things with Burns as its central piece.