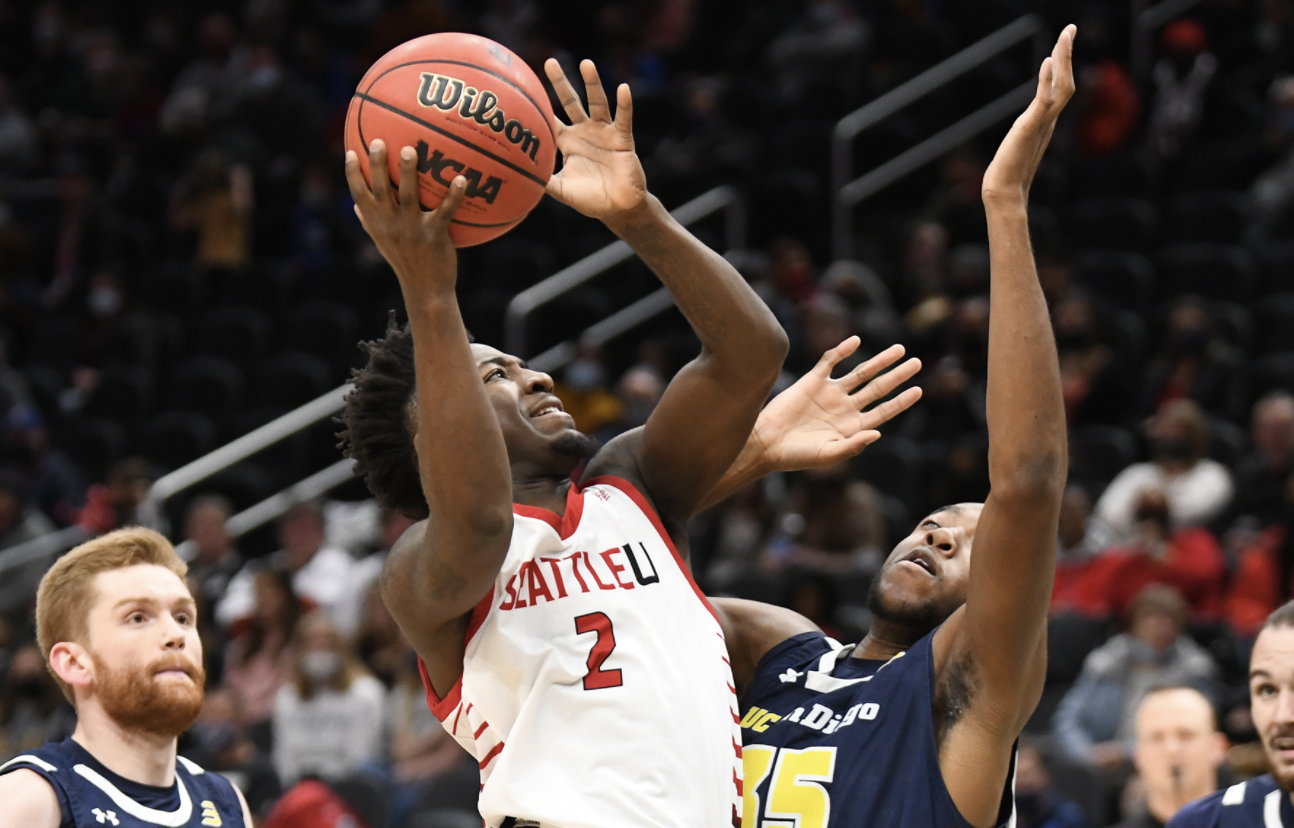 San Diego State Basketball: What can Darrion Trammell bring to the Aztecs?

San Diego State basketball has done a tremendous job navigating the transfer portal for scoring reinforcements over the last few years. In fact, the Aztecs have been led in scoring by a former transfer in three of their last four campaigns under head coach Brian Dutcher. Even with Matt Bradley already confirmed to return for next season, the Aztecs could use another scoring option. SDSU only posted the 167th-best adjusted offense this past season and needs another scoring punch – particularly in the backcourt.

Coach Dutcher wasted no time in finding a potential solution, securing an early commitment from Seattle U transfer Darrion Trammell. The 5-10 guard is fresh off his second consecutive All-WAC season after originally starting his career at the JUCO level. He is a dynamic two-way player who, while undersized, has proven throughout his career to be a high-level performer. Trammell averaged 18.7 points, 5.1 assists, and 2.3 steals per game over his two seasons with the Redhawks.

San Diego State has posted five consecutive 20-plus win seasons under Coach Dutcher, but has zero NCAA Tournament wins to show for it. The Aztecs had their sensational 2019-20 season end in a canceled postseason and lost in the first round as a No. 6 seed and No. 8 seed during the last two attempts. They should maintain an elite defense next season, as they have throughout Dutcher’s tenure, and Trammell will aid in that as an excellent defender while adding some self-creating offense to the mix. Dynamic guard play is essential for winning in March.

Let’s dive deeper into Trammell’s game to analyze where he can be most impactful for the Aztecs.

Strong offensive sets can only take a team so far. At a certain point, offenses need to have go-to isolation scorers who can create for themselves in late shot-clock or crunch-time situations. San Diego State had multiple such threats during its best recent season (2020) with Matt Mitchell and Malachi Flynn leading the way for the 11th-best adjusted offense in the country.

Having multiple self-creating scorers was the biggest missing piece of this past season’s version of the Aztecs. They were sub-160 nationally in adjusted offensive efficiency, which overshadowed the second-best defense in the country in an eventual a first-round exit in the NCAA Tournament. Bradley was the lone player to average over nine points per game for the Aztecs.

Darrion Trammell is the type of incoming scorer who could become the Robin to Bradley’s Batman. While the jump from the WAC to the MWC is significant, Trammell has an outstanding two-year track record of high-level scoring ability with the ball in his hands. His 18.7 points per game average over two seasons with Seattle speaks for itself, but the details of his scoring numbers tell a better story as to how he can impact the Aztecs.

Diving deeper into the numbers…

Darrion Trammell is about as well-balanced of a scorer as there is in college hoops. The term “three-level scorer” is often overused, but he fits the label perfectly. Trammell gets downhill and finishes around the basket well, has a steady mid-range game, and can also connect from beyond the arc. His attempt rates at all three levels indicate that he is not dependent on one area of his game.

Trammell was Seattle’s leading scorer in each of the past two seasons and did much of it of his own volition. Of the 663 total points he scored from the field with the Redhawks, 560 of them were unassisted (84.5 percent):

Trammell also got to the free-throw line at will over the past two seasons. He ranked 308th nationally in free-throw rate during his first season with the Redhawks and upped his national ranking to 103rd during this past campaign. In total, he shot 267-of-319 (83.7 percent) at the stripe over the past two seasons; not only an incredible volume of attempts but with excellent efficiency as well. He ranked in the top 20 nationally in total made free throws in each of his seasons with Seattle.

High usage is not just about scoring

Only 10 players recorded at least 17 points and 5 assists per game during the 2020-21 season and only seven were able to accomplish that feat during the 2021-22 season. Darrion Trammell is on both of those lists. More than just a three-level scoring threat, he also creates for his teammates at a high rate. Trammell ranked in the top 50 nationally in assist rate during each of his two seasons with the Redhawks, keeping his turnover rate under 18 percent both times as well.

San Diego State ranked 200th nationally in assist rate during this past season with Trey Pulliam as the team’s leading distributor. Pulliam led the team with a 22.9 percent assist rate and 3.4 assists per game. The senior is now out of eligibility, though, and Trammell figures to be the incumbent starter at the point guard slot this season. Of course, the conference jump is notable, but Trammell’s playmaking numbers are promising.

Trammell’s ability to create both for himself and others with the ball in his hands makes him a potentially ideal fit in the backcourt for San Diego State. He is lightning-quick with a strong build, two characteristics that should translate into a high-level conference. Trammell is shifty with the ball and is particularly deadly in the pick-and-roll. He will shoot against a sagging big and attacks hedges very well by snaking the big to get inside the arc with a numbers advantage.

San Diego State’s most recent point guard additions via the transfer portal have been Devin Watson, Malachi Flynn and Terrell Gomez. Trammell likely slots in between those three in terms of projected contributions.

SDSU wins with its defense

Trammell’s fit as an offensive player helps to fill some critical holes in San Diego State’s rotation. With the program’s penchant for defense, though, he also needs to be a standout on that end of the floor. To this point in his career, he has been exactly that. Trammell is one of the nation’s best swipers, recording at least two steals per game in back-to-back seasons. He was named to the WAC’s All-Defense team for his efforts during this past season.

Individual defensive statistics always need to be taken with a grain of salt, but Trammell grades out very well across the board. D-PRPG and DBPM both attempt to statistically evaluate individual defensive performance. Out of 2198 eligible players on Bart Torvik (at least 40 percent of minutes played), Trammell rated 47th and 88th nationally in those statistics, respectively. He also posted the 26th-best steal rate in the country during this past season.

San Diego State demands excellence defensively out of its players. Dating back through much of the Steve Fisher era, the Aztecs have rated in the top 60 nationally in AdjD in 15 of the last 16 seasons (six top 15 finishes over that span as well). Trammell’s reputation at Seattle indicates that he should be a solid fit in SDSU’s defensive-oriented scheme.

The biggest question with Trammell is how his game will translate to the Mountain West. He is an undersized guard who is set to make a big leap in the competition level. For reference, the WAC was rated as the 15th-toughest conference last season (per KenPom) while the MWC slotted in as the seventh-toughest.

Here are Trammell’s splits across differing levels of competition over the last two years:

Trammell has noticeably struggled — particularly with scoring efficiency — in his limited games against difficult competition. He will not be the No. 1 name on opponents’ scouting reports next season, though, which could lead to better efficiency. For now, though, he is just 38.8 percent on 2-point attempts and 29.1 percent) on 3-point attempts in 22 games against the KenPom top 200.

Still, his overarching statistics are impressive, regardless of competition level.

There have only been 36 individual seasons since 2007-08 in which a player has averaged at least 17 points, 5 assists, and 2 steals per game. Darrion Trammell accounts for two of those seasons. While it is unlikely that he will match that level of production with San Diego State next season, his ability to make diversified contributions on the floor is inarguable. He can score, create, and defend — all at high levels.

The Aztecs need his self-created scoring more than anything else, but his defensive intensity is why he is a potentially strong schematic fit under Coach Dutcher. There is a lot to like about how Trammell fits with San Diego State. The additional offensive punch he should bring alongside Bradley could be the necessary ingredient for the program to advance in the NCAA Tournament.