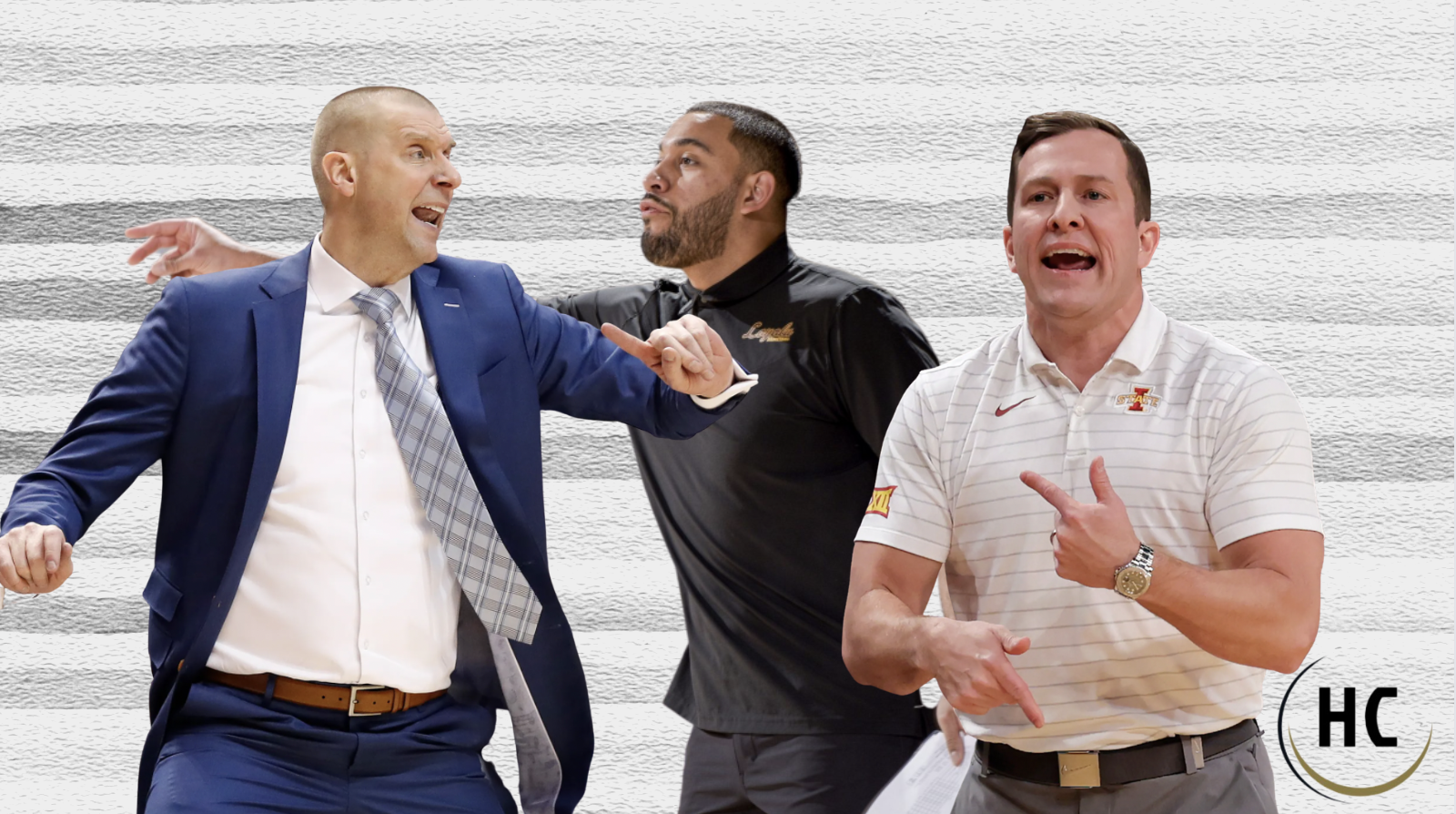 Several legendary NCAA basketball coaches have retired in the last 13 months. Who is next in line if more walk away?

Three NCAA basketball coaching legends have elected to walk away from the sport in the last 13 months with Roy Williams, Mike Krzyzewski and, most recently and most surprisingly, Jay Wright opting to retire.

There are multiple reasons for those retirements, including age and burnout, but it’s undeniable that the changing landscape in college sports has played a factor, too. The transfer portal, one-time transfer waiver, conference realignment and NIL rules have all made the profession more time consuming and demanding than ever before.

The three coaches mentioned above were part of a wave of coaches who have served as pillars of the sport for the last several decades. There are other legendary coaches in that wave who are getting up there in age or have expressed displeasure with the sport’s changes, and there are some who fit both molds.

North Carolina and Duke found their coaching successor internally, promoting assistants to the head role. Villanova also stayed within the family, hiring Fordham’s Kyle Neptune, who spent a decade on Wright’s staff before taking the head job with the Rams last offseason.

When the next legends walk away, who is in line to replace them? Some are expected to follow that mold and promote internally or bring in someone with ties to the program, while others may look outside for the best candidate.

Based on our existing intel, along with some projections into the future, here are our best guesses at who will replace eight existing coaching legends approaching retirement.

—Ranking best available MBB transfers
—Miami’s Wong threatens to transfer over NIL compensation
—Why UNC should be the preseason No. 1 team

John Calipari signed a lifetime contract with Kentucky in 2019, so he’s not leaving unless he decides to walk away. That said, Big Blue Nation is starting to get restless with their head man after a losing season in 2021, first-round exit at the hands of Saint Peter’s last month, and zero Final Fours since 2015. Calipari is also 63 years old.

When the time does come for Calipari to leave, no matter if that’s sooner or later, there are no real limits on who Kentucky appeals to. It’s arguably the most prominent program in the sport with unlimited resources and a passionate fan base. They also haven’t shown a need to “stay in the family” like Duke, North Carolina and Villanova did during their transitions.

At the same time, there isn’t an obvious slam dunk candidate out there like Calipari was back in 2009. Most of the sport’s top young coaches — Chris Beard, Eric Musselman, Nate Oats — are at high-profile schools that are willing to do whatever it takes to retain them. All three seem pretty happy in their respective locations, too.

Chances are we’ll see someone emerge over the next few years as the sport’s coaching landscape changes, and Mark Pope is as good of a bet as any in that regard. Pope played for Kentucky and has led BYU to three consecutive 20-win seasons in his only three seasons at the helm, including an NCAA Tournament appearance in 2021 (the Cougars would’ve easily made it — and been a threat — in the 2020 tournament, too).

He is guiding the program through its Big 12 transition, which will happen after the upcoming season, when he’ll be routinely tested against top competition. There is the chance that the move, coupled with his Mormon faith, make it appealing to stay in Provo.

But this is Kentucky. If he continues to be one of the game’s best young coaches, Pope will at least be in the mix.

If you’re looking for a coach who might walk away simply because of the changes in college basketball, Izzo is your man. He has not been shy about his disapproval of the transfer portal and and one-time transfer waiver and at 67 years old, it feels like we’re only a few years away from him hanging it up.

When that happens, Michigan State will have no shortage of options. Current assistant Doug Wojcik would certainly be in the mix, as would past assistants like Dane Fife and Dwayne Stephens.

But Loyola Chicago’s Drew Valentine might be a better option than any, particularly in another two or three years.

The 30-year-old just led the Ramblers back to the NCAA Tournament in his first season at the helm and played a big role in creating the culture that caused the program to thrive under Porter Moser. He’s also from Lansing, played at Oakland and started his coaching career as a graduate assistant under Izzo. His brother, Denzel, is a Michigan State legend.

Valentine is a rising star who has already proven himself. If he has another couple of years to further build his resume, he could be an easy choice.

Jim Boeheim is 77 years old and has been coaching Syracuse since 1976 (though he has been on staff since 1969). It feels like only a matter of time before he ends his legendary career. While he hasn’t made it public, Boeheim has said that he knows when he’s going to step away. There is also a succession plan in place when that happens.

We are not privy to that plan, but the expectation is that assistant Gerry McNamara will take over the head role. The 38-year-old played for the Orange from 2002-2006 — winning the 2003 national championship — and has been on staff since 2009. He has gradually risen up the ranks and works with Syracuse’s guards.

Fellow assistant Adrian Autry could also be in the mix when Boeheim hangs it up, but we’re giving the nod to the younger McNamara.

Who knows how long Self will continue coaching? He’s 59 years old and is entering his 20th season at Kansas. It’s conceivable that he coaches another decade or so. It’s also conceivable that he leaves in Jay Wright-type fashion with nothing left to prove, or if the school’s NCAA punishment from the FBI investigation becomes too much.

It is worth noting that Self signed a lifetime contract with Kansas in 2021 that includes a clause stating he can’t be fired as a result of that investigation, so it really does boil down to whenever Self walks away. If that happens sooner rather than later, Kansas might be left in a situation where there are few obvious candidates.

Most of the sport’s top young coaches — Chris Beard, Nate Oats and even guys like Todd Golden — are already at jobs that have proven they will pay whatever is necessary to keep them. There also isn’t a Porter Moser-type coach in the mid-major ranks who is both ready for a power-conference job and could handle the expectations in Lawrence.

Danny Manning and Mark Turgeon might be the most notable coaches with Kansas ties, but both have already flamed out at high-major schools.

There is one guy who could fit the bill, though: T.J. Otzelberger.

It’s still early in the 44-year-old’s career but he has been successful everywhere he has been, most notably taking Iowa State from a 2-win team to the Sweet 16 this past season, his first in Ames. He also led South Dakota State to back-to-back NCAA Tournament appearances.

Otzelberger has to maintain success at Iowa State for this to come to fruition yet, at the same time, there aren’t any real indications he won’t. He is great at working the transfer portal and built a phenomenal defense this past season from scratch.

Otzelberger has spent over a decade on Iowa State’s staff in some capacity, but Kansas will be able to make offers Iowa State likely won’t be able to match.

There’s a belief that Mark Few won’t walk away from Gonzaga until he wins a national championship, and there’s also a belief that he may have retired already if the Zags had already climbed the mountaintop. Considering the Bulldogs are entering a reloading year, it might be another couple of seasons before Gonzaga has another great shot at a title.

That pushes the timeline for hiring Few’s replacement back a few years. But no matter when it happens, his successor is expected to be an internal promotion. Tommy Lloyd was in line for the position before he took the Arizona job and I wouldn’t expect him to leave the Wildcats to return to Spokane (though Gonzaga would be foolish not to ask).

Instead, assessing the current group of assistants, Brian Michaelson is the most likely of the group as the longest-tenured assistant. He has spent 15 seasons with the program and been an excellent recruiter, particularly with transfers.

Altman still appears to be going strong at age 63 and that pushes his retirement timeline out a little as well. That might be good news for both Legans and the Ducks.

Legans only has five years of head coaching experience, but that includes guiding Eastern Washington to two Big Sky titles and an NCAA Tournament appearance. He took over as Portland’s head coach this past season and posted a 19-15 record, marking the first time the program finished above .500 since 2015. It was also the first time the Pilots didn’t have a losing record in WCC play since 2011.

Assuming Legans stays with Portland for another few seasons, Oregon will have to look at one of the sport’s best young coaches succeeding at a lesser program in its own state. I think that makes this possibility a pretty safe bet — unless Legans gets another power conference opportunity before Altman walks away.

West Virginia is not one of the blueblood or elite jobs in college basketball, but the program has been led by one of the sport’s all-time coaches for the last decade and a half. Replacing Bob Huggins will not be a small task for the Mountaineers, yet it shouldn’t be too hard to find a capable replacement — especially if the 68-year-old Huggins decides to hang it up in the next year or two.

That replacement comes in the form of Ohio’s Jeff Boals. He played for the Bobcats in the early ’90s but spent a decade of his early coaching years in the state of West Virginia with Charleston and Marshall.

After posting a 55-42 mark in three years at Stony Brook, Boals is 59-33 in three years at Ohio, including a 25-win campaign this past season and an NCAA Tournament victory over Virginia in 2021. It’s only a matter of time until he finds himself in charge of a high-major program, and West Virginia feels like a good fit.

It feels like Jim Larranaga is going to coach forever, between diving on the floor to pump up his team and using NIL to land Kansas State transfer Nijel Pack, but he will turn 73 in October. Miami needs to have a plan in place, because that day may be coming sooner rather than later.

A few years ago, it felt like Frank Martin — a Miami native — was a shoo-in. South Carolina’s Final Four run in 2017 was still fresh and it felt like the Hurricanes needed a spark. Instead, Larranaga recaptured some positive momentum while Martin was fired by the Gamecocks this offseason, certainly dampening his star.

That said, Martin’s reputation is still largely intact and he quickly picked up another job at UMass. Assuming he meets expectations with the Minutemen, he’ll be a candidate when Larranaga steps aside.