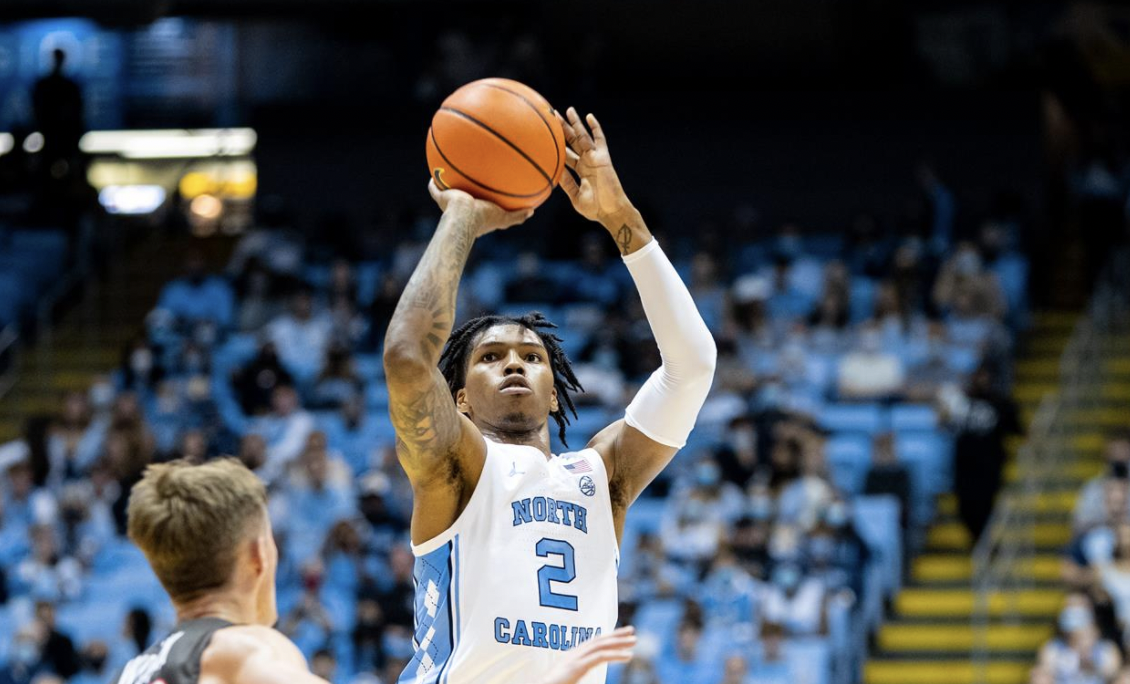 Why UNC Basketball should be preseason No. 1 and will build on last year’s late surge

UNC basketball returns four starters from last season’s national runner-up team. Here’s why the Tar Heels should be preseason No. 1.

UNC guard Caleb Love announced he will be returning for his junior season with the Tar Heels on Sunday evening, the final piece in North Carolina returning all four eligible starters from the team that made the national championship game earlier this month.

Armando Bacot, Leaky Black and RJ Davis all announced their decisions to return in the last two weeks, giving head coach Hubert Davis an experienced, veteran core to build around in his second season in charge.

The return of that quartet solidifies North Carolina as the team to beat going into 2022-23, and I will have the Tar Heels as my top-ranked team in the preseason.

Let’s start with the obvious here. The Tar Heels are now set to return nearly 75 percent of their points and roughly 78 percent of their minutes, both of which will be among the nation’s best next season.

There were 17 teams with at least that much continuity going into this past season, five of which came from traditional four-bid leagues. Those four (Purdue, Richmond, Saint Mary’s, UCLA) all won at least one NCAA Tournament game. The other was Saint Bonaventure, which had significant flaws (lack of depth and shooting) that kept it from making the Big Dance.

Continuity matters, yet it’s even more rare to have continuity with this level of talent. Love and Davis each recorded a 30-point game in the NCAA Tournament. Bacot tied the NCAA record for most double-doubles in a season and is the only player in the sport’s history to do so in all six tournament games. Black is one of the nation’s best defenders, routinely stifling NBA-caliber offensive players.

Puff Johnson returns after scoring in double digits off the bench twice in the Big Dance while Dontrez Styles was incredibly impactful as well, as was detailed in-depth by our Riley Davis.

Influx of talent/growth of role players

UNC needed its starters to be great because it had no depth in 2021-22. North Carolina ranked 348th in bench minutes, per KenPom, and Hubert Davis famously tightened his bench even more as the season progressed.

There were very few people he could trust outside his starting group, which is a big reason why some are panicked about the loss to Brady Manek. The Oklahoma transfer was undoubtedly a huge part of UNC’s offensive attack with his shooting, but he was also a defensive liability.

Per EvanMiya, North Carolina was more efficient and better defensively when Johnson was on the floor in place of Manek. It was UNC’s best defensive lineup.

I’m not arguing that the Tar Heels won’t feel the loss of Manek, because that’s just simply not true. The team will look and play differently but the results shouldn’t fall off a cliff.

Plus, Johnson and Styles should develop this offseason. Both progressed nicely as the year went on and will improve this summer with bigger roles ahead.

There’s also North Carolina’s incoming recruiting class, which ranks in the top 15 nationally and is headlined by top 50 prospects Seth Trimble and Jalen Washington. Trimble is a starting-caliber guard who should fill in nicely as the third man in the rotation with Love and Davis, while Washington is a big man with a 7-4 wingspan and range extending out past the 3-point line.

This team will have depth, which will make them even more dangerous.

So how does one project a Heels team that wasn’t great all season, wasn’t a lock to even make the tournament until March and even lost at home to Pitt?

Context matters — and there’s data to back up that UNC’s late-season surge was sustainable.

Let’s start with that Pitt game as that was the obvious low point in the season. After that loss, UNC went 11-2 with one of those losses coming in the title game to Kansas. The Tar Heels ranked third in overall efficiency from that point on, per Torvik, and ranked fifth in defensive efficiency.

That defensive mark is important because it illustrates how much UNC improved over time, not just how it got hot in March.

Here’s how North Carolina ranked in various categories at different points in the season, per Torvik:

Many point to the Pitt game as UNC’s low point because of how bad the Panthers were, but the Heels also suffered back-to-back 28- and 22-point losses to Miami and Wake Forest, respectively, in January.

North Carolina went 17-4 over the season’s final two and a half months following the loss to Wake. It ranked 11th nationally in efficiency during that stretch, per Torvik, ahead of teams like Villanova, Kentucky, Arizona, Arkansas and Auburn.

The Heels also ranked in the top 20 in both offensive and defensive efficiency after January 23. That high level of play was maintained for about half of the year.

Hubert Davis’ inexperience likely played a role in UNC’s inconsistency early in the season and in some of those troubling losses. This is his first head coaching job at the Division 1 level and he went from being an assistant with this group to following in the footsteps of the legendary Roy Williams. At some point, though, the substitute teacher vibe wore off and he settled in. He made adjustments later in the year — tightening his rotation, defensive assignments, offensive sets, etc. — that experienced coaches implement.

Once he adjusted, though, the Heels took off.

Those two things — Hubert Davis’ first year and North Carolina’s sustained high level of play during the second half of the season — are why you shouldn’t believe those who say the 2022-23 Tar Heels will be like the 2021-22 UCLA Bruins.

UCLA also returned every major contributor from a team that made a surprise run to the 2021 Final Four and entered the season with sky-high expectations but somewhat underperformed.

The Bruins’ run was just that — a surprise. They had lost their last four games prior to the NCAA Tournament and were 5-7 over their last 12 games before Selection Sunday. They were not playing like the 11th-best team in the country like UNC.

That run was also fueled by Johnny Juzang playing the best basketball of his collegiate career. He averaged 22.8 points per game on incredibly efficient shooting in the tournament. Juzang never had a six-game stretch that was close to that at any other point during his two seasons in Westwood.

North Carolina won games because Love played well. It also won games when he didn’t, because other players stepped up. The same goes for Black, Davis and Manek; it wasn’t a one-man show. Bacot was as reliable as anything during the tournament, but he played at that level all season.

And that’s the point — UNC wasn’t a national championship contender all season, but the Heels played at that level for a majority of the campaign. Now that group is running it back with reinforcements.

As a result, North Carolina should enter the 2022-23 season as title favorites.