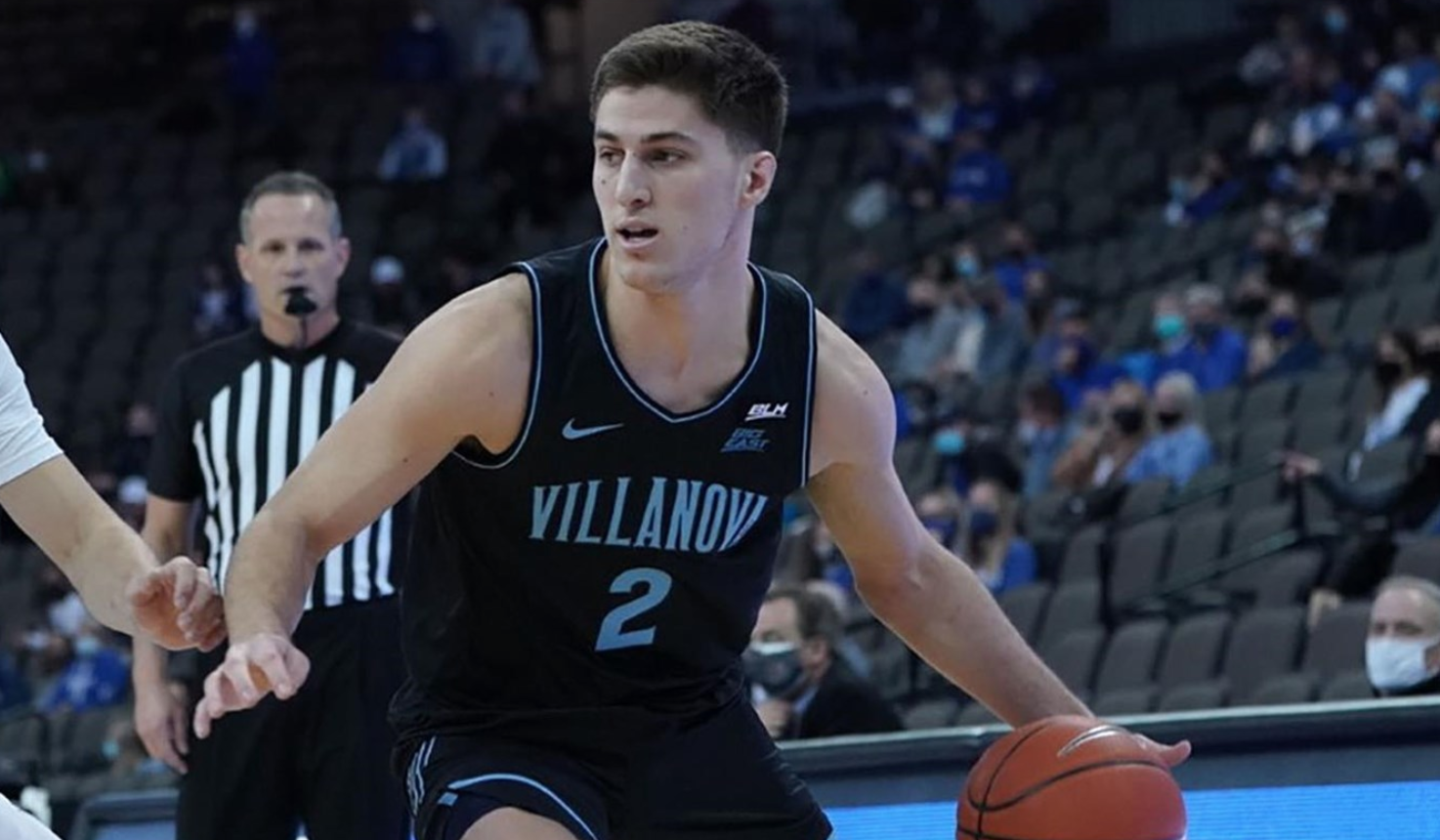 Ever-improving guard Collin Gillespie is back for Villanova basketball. How far can the fifth-year senior take the Wildcats?

Last season, 19 different players were named All-Americans by at least one of the AP, USBWA, NABC, and Sporting News. Four of them are returning for the 2021-22 college basketball season — and only one is a guard. Villanova basketball’s Collin Gillespie has quietly turned from unheralded recruit to solid reserve to national star during his four years with the program.

After exercising his option to return for a fifth season due to COVID-19, Gillespie is seeking “one last run.” This time, he is no longer in the shadow of proven stars such as Jeremiah Robinson-Earl and Saddiq Bey. Villanova is his team, and it is projected to be preseason Top 10 in the land. Can his return help to recharge a Wildcats’ program that is seeking a return to national title contention?

Villanova basketball has by no means struggled over the past few years, but a dip has been noticeable:

Gillespie’s return for a fifth season could potentially reinvigorate Villanova’s national title potential. Their leader has missed out on the last two postseasons due to COVID-19 and injury. Still, Gillespie holds a career record of 13-1 in Big East and NCAA Tournament games. That track record bodes well for his final act.

Let’s dive into how Gillespie might be able to lead Villanova in 2021-22.

Villanova’s success as a program has been built at the point guard position. Of course, other stars have come and gone over the years, but it truly feels as though the Wildcats are always at their best with an elite floor-general at their disposal. The value of having such a player has been evident during the Jay Wright era. This dates back to the likes of Randy Foye, Kyle Lowry, and Scottie Reynolds, but has also been highly prevalent of late.

Just take a look at the program’s incredible three-year run from 2016-2018. They finished 1st, 2nd, and 1st on KenPom in those three years, cutting down the final nets as national champs twice. What do those three squads have in common with Gillespie’s fifth-year return, you might ask? They each represent the last three times Villanova returned an All-Big East First Team guard from the prior year.

Overall, returning any All-Conference guard has (unsurprisingly) had a big effect on Villanova teams:

Collin Gillespie, though perhaps not the NBA prospect others have been, epitomizes the consummate collegiate point guard. He is experienced, can light it up from deep and is a steady creator that rarely turns the ball over.

Gillespie has appeared in 118 total games with Villanova in his career and has started in 87, including every game over his last three seasons. He backed up National Player of the Year Jalen Brunson as a freshman. Put simply, you would be hard-pressed to find a single more experienced player in the entire nation. Gillespie is as poised as they come and has more than earned Coach Wright’s trust.

Regular-season successes are great, but Villanova basketball has reached the status where its year-after-year sights are set on competing for the national title. Jay Wright and company have been able to do exactly that twice in their last five tries, an impressive feat.

There are many qualities that go into a national title contender, but arguably one of the most important is consistency. Winning six games in a row against top competition is challenging, and there is very little leeway for an off game.

Consistency starts at the top for any team. Villanova boasts elite coaching, but their starting point guard is just as consistent. Ever since Gillespie took over the starting job for the Wildcats, they have been able to count on him to supply the same types of contributions in just about every game.

In the 50 games across the last two seasons where Gillespie started and stayed healthy, he…

Villanova basketball is about as consistent as it comes on offense. The Wildcats have ranked in the Top 21 nationally for adjusted offensive efficiency in each of the past eight seasons. This, of course, is thanks in large part to their superb run of star point guards.

Gillespie has set the table for three straight Top 16 offenses, with their AdjO rank improving with each season. He should do the same as a fifth-year senior. One of the core ingredients of a top-tier point guard is leadership, and Gillespie leads by example when it comes to generating a highly efficient offensive unit.

Gillespie’s efficiency is a microcosm of his consistency.

Collin Gillespie was quietly among the nation’s most efficient high-volume players last season. In fact, he ranked 37th in the country in offensive rating (118.9) among players that used at least 20 percent of their team’s total possessions (22.4 percent). It was his second consecutive year cracking the rankings in the category, having finished 78th the year prior. The odds are high that he continues his efficient offensive ways.

His efficiency isn’t just about one particular area, either. Gillespie is an elite shooter from 3-point and mid-range while also displaying excellent playmaking skills. The vast majority of his individual offensive statistics are above the national average, making him very tricky to defend.

It is also important to note that his finishing took a significant dive this past season. He had previously shot 60.4 percent at the rim over his prior campaigns, but that dropped nearly eight points last year. A resurgence in that area could push him to new heights in the efficiency department.

If his scoring is taken away, Gillespie can dominate as a playmaker. If his teammates are covered and he is forced to win games himself, he is capable of doing that as well. This was most evident in his season matchups with Marquette and Seton Hall last season. Villanova went 4-0 in those games, with Gillespie scoring 22 points in the first two wins against those teams. He then adjusted to defensive changes to dish out exactly eleven assists in both of the second matchups.

Overall, he is one of the most skilled offensive guards in the country. His No. 8 ranking among Three Man Weave’s Top 100 players speaks volumes of his elite level of play.

Collin Gillespie is already an NCAA champion. He also holds a pair of Big East Tournament titles. From an individual standpoint, his trophy case contains a Big East Player of the Year award and two All-Conference selections as well. While he is already a program-great, he is still returning for a fifth season with unfinished business due to being unable to compete in back-to-back postseasons.

COVID-19 took away his chance at postseason glory in 2020, then an MCL injury left him on the sidelines for Villanova’s last five games in 2021 — including all four Big East Tournament and NCAA Tournament games.

With this in mind, Gillespie has not been able to play in a postseason game since his second season on campus. This upcoming campaign will be his fifth, and also represents the opportunity to end on a bang. His first two seasons came mainly as an auxiliary piece to more talented teammates. Gillespie is now Villanova’s unquestioned leader and his storybook career still has some empty pages to fill.

Gillespie is a star, and he has the teammates around him to compete for another national championship. Only two rotation pieces from last season departed, leaving several key returners. These include his backcourt partners Justin Moore and Caleb Daniels; together, they form one of the best guard trios in the nation.

Jermaine Samuels also returns in the frontcourt as a potential All-Conference player. There are questions at the “5” spot in Villanova’s rotation, but Coach Wright has options. These include Eric Dixon and Top 100 freshman Nnanna Njoku, while the addition of a healthy Trey Patterson helps in the frontcourt as well.

More often than not, the best Villanova basketball teams have succeeded due to elite guard play. With Gillespie leading the way, the Wildcats appear poised to contend for the national championship for yet another season. Gillespie is one of the best players in the country but has not been able to shine on the brightest stage in far too long.

His fifth year will give him the opportunity to do just that.