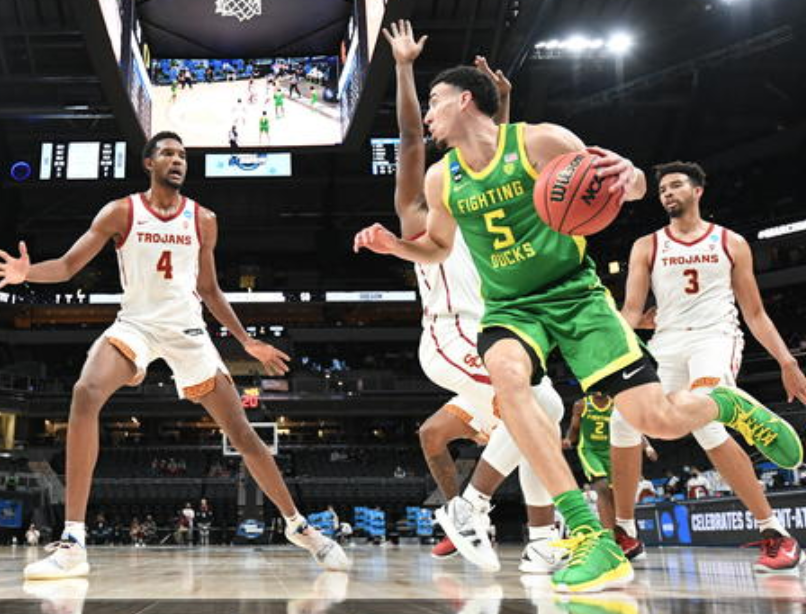 Who is Chris Duarte? Five facts about the former Oregon Ducks star before the 2021 NBA Draft

Get to know Chris Duarte, the All-American guard who has answered every challenge on his unconventional path to the pros.

Heading into the NBA Draft, former Oregon Ducks star Chris Duarte currently projects as a first-round selection. That should come as no surprise to anyone who has been following Duarte recently, as the shooting guard is one of the most highly-decorated college players available.

However, what you may not know is that Duarte’s path to the pros has been anything but typical.

Here are five facts you need to know about Chris Duarte:

Chris Duarte could be just the tenth Dominican NBA player

It is nothing new to say that basketball is an increasingly international game. That said, the sport is still working on making inroads in some areas, especially in regions where other pastimes dominate the landscape. One such place is the Dominican Republic, where baseball still reigns supreme – and where Chris Duarte calls home.

According to RealGM, only nine Dominican players have reached the NBA, with that barrier originally being broken by Tito Horford in 1988 when he was drafted by Milwaukee. His son, Al Horford, was drafted third overall after back-to-back national championships at Florida. Karl-Anthony Towns represented the island nation during FIBA competitions when the team was coached by his future college coach, John Calipari.

Duarte could soon join Towns and Horford in the small fraternity of Dominican NBA players. However, there may be more on the way soon. A few current collegians to watch include Memphis’ Lester Quinones, South Carolina’s Justin Minaya, and Fordham’s Joel Soriano. None of those potential future pros have as high a ceiling as Duarte does, though.

Duarte was originally committed to play at Western Kentucky

Though Duarte was raised in the Dominican Republic, the prolific scorer finished his high school career in upstate New York. He turned many a head in that time, earning accolades as a top player in the state and an invitation to the 2017 Jordan Brand Classic game. Following that appearance, in which he played on the same court as other future stars like Jordan Nwora and Collin Gillespie, the future started to come into focus for Duarte. That future took the form of a scholarship offer from Rick Stansbury and Western Kentucky. While Duarte initially committed to WKU, he ended up attending junior college instead. That kind of move can easily derail a player’s career, but in Duarte’s case, it may have been the best thing possible.

When Western Kentucky didn’t work out, Duarte ended up enrolling at Northwest Florida State College, a JUCO powerhouse in the Florida panhandle. Some NWFSC alumni include former NBAers Kedrick Brown and Donell Taylor, as well as Andres Feliz, who starred alongside Ayo Dosunmu and Kofi Cockburn at Illinois but missed out on a shot at the Big Dance when the 2020 NCAA Tournament was canceled.

Duarte made the most of his two seasons in Niceville, Fla., helping the team to the NJCAA Elite Eight in his freshman year and earning an all-conference nod in the process. Despite being only a year removed from committing to a mid-major and then ending up at a JUCO, that first year at Northwest Florida State was enough to convince Dana Altman. Prior to his sophomore season, Duarte announced his future plans to transfer to Oregon.

Altman was incredibly wise to lock this one in early: Duarte went on to be named the NJCAA Player of the Year in 2019 after averaging 19 points per game and leading the Raiders to the Elite Eight for the second consecutive season. Still, there were questions regarding just how much of Duarte’s success would translate to the bigger stage of the Pac-12.

Those questions about Duarte’s bona fides were answered quickly after he put up 16 points in the season opener against Fresno State and had a 31-point game later in the year. He went on to earn multiple Pac-12 Player of the Week honors and an honorable mention for the All-Pac 12 team. One of the best performances of his first season in Eugene featured a gaudy stat line of 30 points, 11 assists, and eight steals.

There was room for improvement, however, as Duarte shot 33.6% from beyond the arc in 2019-20. As a shooting guard looking to make it in today’s game, a number like that can be a death knell – especially considering he had been a 40% shooter the year before at NWFSC. While Duarte proved in Year 1 that he belonged in high-level D1 basketball, now the questions turned to his pro potential.

Unsurprisingly, Duarte answered those questions – and then some. He raised his shooting percentage on threes to 42.4% and led the Ducks into the Sweet 16 by scoring 23 points on 9-of-12 shooting against Luka Garza and Iowa. Oregon’s season ended there, but the award season was just getting started for Duarte, who ended up earning a place on the All-America third team, winning the Jerry West Award as the nation’s best shooting guard, and taking home the Pac-12 Player of the Year trophy.

After a season like that, the question is no longer whether Duarte will be drafted, but rather when he will come off the board. Assuming he does, his selection will mark the fifth consecutive NBA Draft in which the Ducks have had a player chosen.

The streak started back in 2017 when Oregon had three players – Jordan Bell, Tyler Dorsey, and Dillon Brooks – taken in the second round. The following year, one-and-done prospect Troy Brown Jr. went in the first round at No. 15 overall. After that, it was Bol Bol’s turn, with the promising big man falling to pick No. 44 after an injury cut short his only season in Eugene. It was back to the first round for the Ducks in 2020, as Payton Pritchard went to the Celtics at No. 26.  Brooks and Pritchard have already established important roles on their respective pro teams and could be paving the way for Duarte to do the same. Of course, once Duarte is taken in next month’s NBA Draft, his new fanbase will undoubtedly have its own set of questions for its newest player.

Remember, though, that this is a person who chose basketball over baseball in the Dominican Republic, a person who made the most of two unplanned JUCO years, a person who responded to a dip in his three-point percentage by becoming the nation’s best shooting guard.

So fire away, new fanbase – if history is any indication, Chris Duarte has the answers you want.