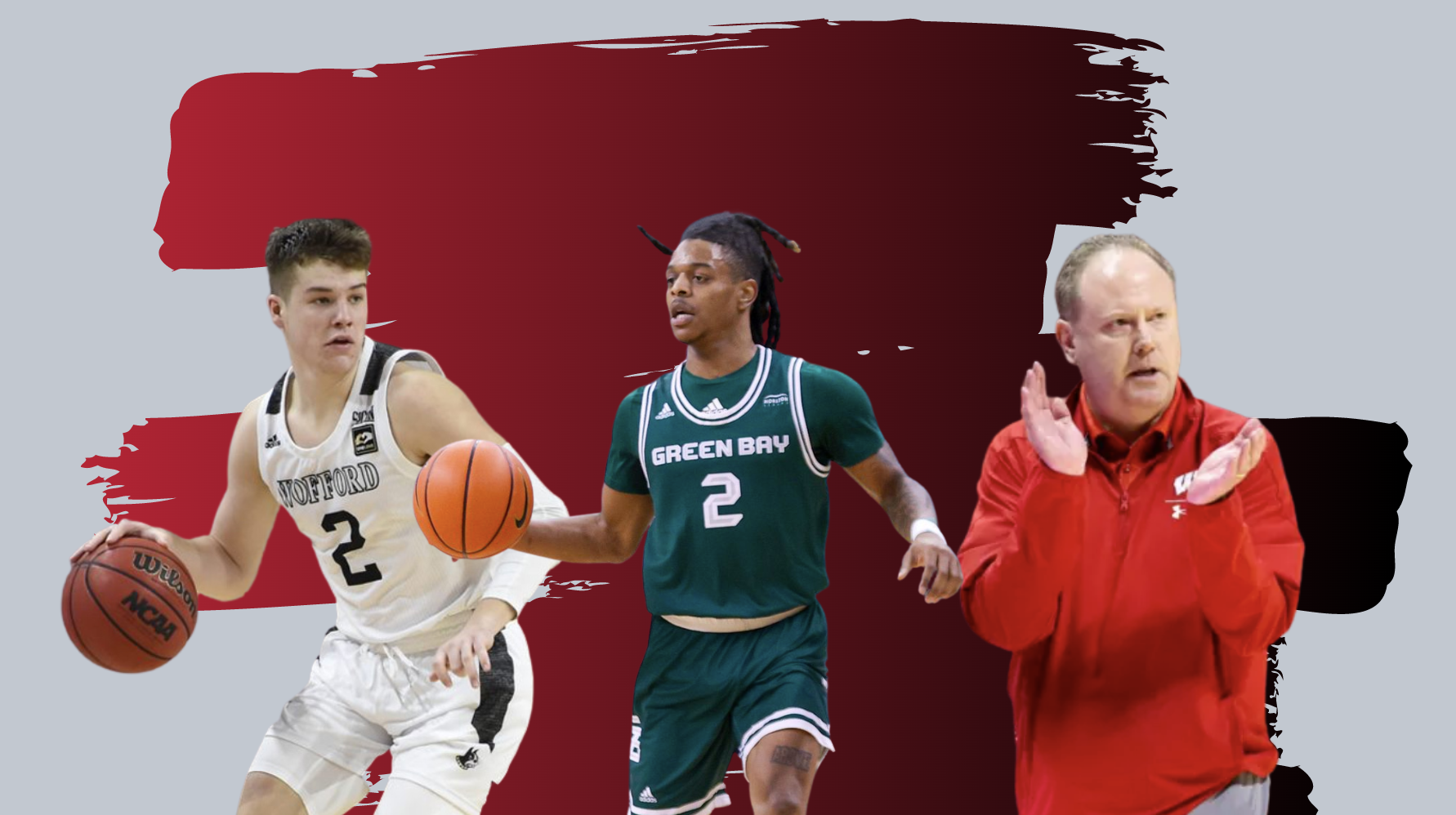 Wisconsin basketball has two crucial holes for next season following the departures of Johnny Davis and Brad Davison. Who is arriving to help fill those gaps for Greg Gard?

The Greg Gard era of Wisconsin basketball has featured underrated success. While the Badgers have reached a maximum of the Sweet 16 under his leadership, the two-time Big Ten Coach of the Year has led his team to six NCAA Tournament appearances in seven years (including the canceled 2020 event). Wisconsin is coming off a breakout season that included a regular-season conference title and a No. 3 seed at the Big Dance. The program needs to fill gigantic holes, though, in order to replicate that success in 2022-23.

Leading scorers Johnny Davis — the Big Ten Player of the Year — and Brad Davison both departed this offseason as key figures on Wisconsin’s wing. Davis represented the team’s go-to offensive weapon and likely third-ever NBA Draft lottery pick in program history. Davison’s high-effort play and shooting ability will be sorely missed following his five-year tenure as a 157-game starter in Madison. Thankfully, a solid core remains in place with Chucky Hepburn, Tyler Wahl and Steven Crowl all set to return. That grouping brings solid defense and interior scoring to the court but lacks a star and consistent perimeter threat.

There is no individual on Wisconsin’s roster capable of replacing Davis’s production as one of the nation’s top players; it will also be challenging to replicate Davison’s grit. Jahcobi Neath and Jordan Davis are returning wings from last season, but neither averaged more than two points per game. To add more possible options, Wisconsin added a trio of newcomers for 2022-23: Max Klesmit, Kamari McGee and Connor Essegian.

If the Badgers are going to make another NCAA Tournament appearance this coming season, at least one of their new faces will be asked to emerge. The Badgers will need to start two of the Neath, Davis, Klesmit, McGee and Essegian grouping. But what skills do the newcomers need to bring most and who are they? Let’s dive deeper.

What exactly is Wisconsin losing?

There is a degree of nuance necessary in evaluating departures. Sure, Johnny Davis and Brad Davison combined for 33.8 points per game, but how they achieved those numbers explain what Wisconsin has to replace, primarily poise and tough shot-making.

Davis was one of the top contenders for the National Player of the Year award last season in part because of his tremendous self-creation. Wisconsin lacked adequate floor-spacing, but he was able to create for himself consistently enough to win games. He was just the fourth Wisconsin player to average at least 19 points per game over the last 30 seasons.

Davis racked up the 29th-highest percentage of possessions used in the country last season. Even as a wing, he accounted for nearly one-third of all of the Badgers’ unassisted 2-point makes. The void he leaves as a self-creator is enormous within Wisconsin’s offense, especially when coupled with Davison’s graduation.

Davison and Davis combined for 51.6 percent of Wisconsin’s unassisted mid-range jumpers and 51.9 percent of its unassisted 3-pointers last season. As much as Davis gets credit for the Badgers’ offense, Davison was a tough shot-maker in his own right. He was the only Badger to make over 1.2 3-pointers per game last season, hitting 2.4 per game. Losing Davison’s experience and floor-spacing is also a huge, albeit expected, blow.

Wisconsin ranked 62nd nationally in adjusted offensive efficiency last season despite finishing sub-200 in both 2-point and 3-point percentages. How? By offsetting their shooting woes with leading scorers who took care of the ball and willed their way to the free-throw line:

Without Davis and Davison combining for ball security, dynamic shot-making, and high free-throw rates, the Badgers have major offensive holes to fill.

No individual can make up for all of the lost ability in those areas, but the newcomer perhaps most up to the challenge is Wofford transfer Max Klesmit. The 6-3 Neenah native posted 12.3 points per game on 34.8 percent 3-point shooting over two seasons with the Terriers. He was a Third Team All-SoCon honoree last season. Even with only two collegiate years under his belt, Klesmit is the most experienced of Wisconsin’s incoming guards.

Klesmit is mostly known for his scoring but also tallied 1.6 steals per game last season. He appears likely to start alongside Chucky Hepburn in 2022-23. Wisconsin’s spacing, on paper, does not look strong for next season; their returners shot only 28.5 percent on 3-point attempts last season. As a result, Klesmit will need to make a big impact as a shooter.

Klesmit attempted 6.5 3-pointers per game last season and will similarly be a high-volume perimeter threat at Wisconsin. He shot better from deep as a freshman (37.3 percent) than as a sophomore (34.0 percent), though on much lower volume. Klesmit’s career free-throw shooting of 83.9 percent projects well for his future shooting. Klesmit also served as a creator with Wofford, converting on 57.4 percent of his 2-point shots last season with over 90 percent of those makes being unassisted.

Klesmit’s 3-point shooting trends are not particularly kind to a jump in competition. He also never played a KenPom top 65 team over his two seasons at Wofford. For reference, eight of the 14 Big Ten teams ranked in the KenPom top 65 last season. He will absolutely be a useful addition for Wisconsin, but he might be tasked with being the top wing scorer. Whether he can answer the call will tell a lot about the Badgers’ ceiling.

The lack of depth behind Chucky Hepburn last season was a cause for concern that came back to bite Wisconsin. The team faltered in the NCAA Tournament’s second round when Hepburn went down with an injury and it contributed to an upset loss. Hepburn will be back this season and is a national breakout candidate. He will need to be on the court as much as possible, but Wisconsin added Kamari McGee to either spell – or play alongside him – for stretches.

McGee, originally from Racine, Wis., is making the trek down I-41 and US-151 from Green Bay to Madison for this coming season. The 6-0 guard averaged 11.6 points and 1.9 assists per game for the Phoenix last year while being named to the Horizon League’s All-Freshman team. Green Bay finished just 5-25 as one of the worst teams in Division-I, though. Moving to the Big Ten will be a big jump for McGee, who struggled with efficiency at the Horizon level. He shot only 38.8 percent from the field and 27.5 percent from 3-point range.

A strong closing stretch to his freshman year, though, ignites some optimism for his future with the Badgers.

McGee is not necessarily a wing to help replace Davis/Davison, but he does give Wisconsin an option off the bench for when Hepburn needs a breather. He will need to significantly increase his efficiency as his 87.7 offensive rating ranked just 2084th of 2198 players who played at least 40 percent of their team’s minutes last season. McGee shot 80.8 percent at the foul line as a freshman, which indicates possible shooting improvements; Wisconsin could really use another perimeter shooter.

Wisconsin is not a program that traditionally relies on freshmen. However, first-year players have played big roles for the Badgers in back-to-back seasons. Indiana native Connor Essegian (No. 225 by 247Sports Composite) is not as highly rated as Johnny Davis or Chucky Hepburn were out of high school, but he is entering a situation with a similar need. Essegian was a big-time prep scorer, averaging 26.8 points per game at Central Noble. He ended his career as the No. 10 all-time scorer in Indiana history.

The most important trait that Essegian could bring to Wisconsin right away is 3-point shooting. He shot 43.2 percent from three as a senior and features an easy release that should translate to the collegiate level. His smooth stroke from distance is what caused many high-majors to offer him scholarships before his eventual Wisconsin commitment. Essegian is an excellent spot-up shooter but also hits while on the move. Whether this comes right away in 2022-23 or further down the road, he should pair nicely with Hepburn’s playmaking in the backcourt.

Given Wisconsin’s floor-spacing needs on the perimeter, Essegian could be a dark horse to play a good chunk of minutes as a freshman. The Badgers have always been a defensively oriented program and that will continue this season. If Essegian is going to be a consistent piece of the rotation, he will need to prove both that his shooting will instantly translate and that he can defend. He will not need to be a high-volume scorer, but giving Tyler Wahl space inside by keeping defenses honest would be a huge contribution.

The Badgers were one of the worst shooting teams in the nation last season and finished as the lowest-rated KenPom team to receive a top-4 seed over the last 11 NCAA Tournaments. They then lost their two leading scorers, including an NBA Draft lottery pick, this offseason. The Badgers’ options to replace them are not stunning on paper, either. They were unable to secure any of the standout options in the transfer portal this season, missing targets such as Ben Vander Plas and Grant Basile.

They instead turned to a couple of local products who averaged double-figures in scoring at mid-majors. Will adding Klesmit and McGee to the preexisting core be enough to push Wisconsin to another NCAA Tournament berth? Can Essegian be an immediate contributor? Is there a forgotten piece of last season’s roster — such as Jahcobi Neath, Jordan Davis or Markus Ilver, primed for a breakout? Where does outside scoring come from? Wisconsin has a ton of questions on the perimeter.

Yet, the Big Ten is expected to experience a down year in 2022-23, and Wisconsin does return three starters from a team that won a regular-season title. A core exists with Hepburn, Wahl and Crowl that could remain in the upper echelon of the league. A lot of things might need to go their way for that to happen, though. First and foremost, Wisconsin needs to find some perimeter scoring, and it likely needs to come from an unheralded group of newcomers.

The Badgers do have a tendency to find hidden gems, though, and Coach Gard has exceeded expectations several times during his tenure. Will the Badgers pull another rabbit out of their hat with this group?