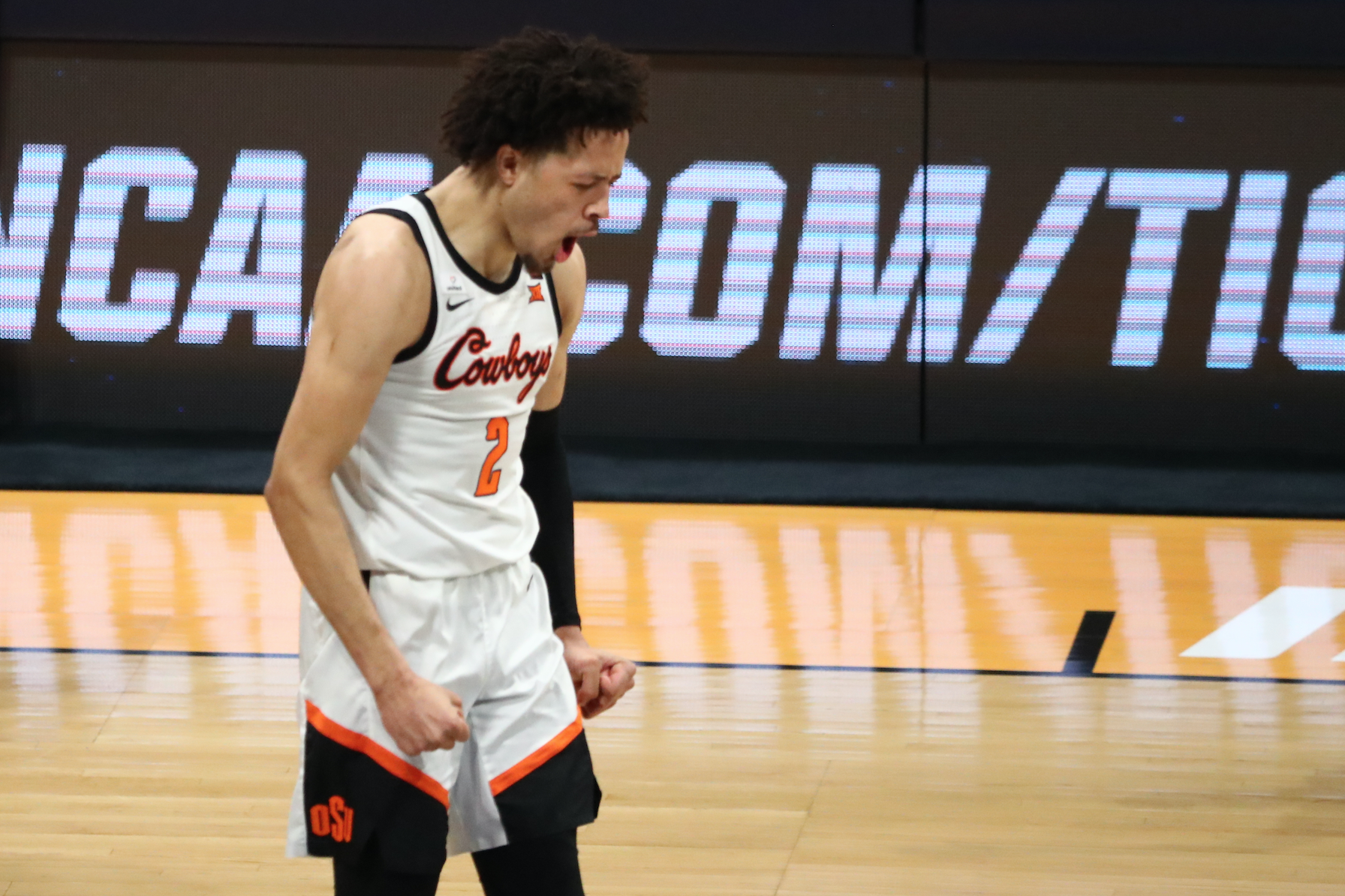 With the complete draft class set following the early withdrawal deadline, here are the latest 1st round projections in our 2021 NBA Mock Draft.

The deadline for NBA Draft early entrants to withdraw and return to college came and went on July 7, finally giving us a clear picture regarding the prospects who will be available in this class.

There were no real new surprises with players keeping their name in the draft. In fact, many notable names opted to withdraw and return to college with the potential of taking advantage of new NIL laws.

Those players weren’t projected to be first-round picks, so their decisions don’t shake up these projections too much.

However, teams are starting to take advantage of the clarity of who’s in the class and who’s out when it comes to scheduling workouts. Some players have impressed in those workouts and at the NBA Combine, which recently concluded as well.

This new intel creates a good deal of shakeups, particularly late in the lottery. So, without further ado, here are our latest projections for the entire first round:

The Pistons shouldn’t overthink this decision. Detroit is rebuilding and hit on most of its picks in last year’s draft. However, the Pistons still need a reliable point guard, and Cunningham is the best point guard and prospect in this draft. His vision and unselfishness make his teammates better, and he has the size and skill to play a variety of positions. Detroit is going to want to put the ball in his hands.

Houston might be very tempted to go with Evan Mobley here. In fact, it wouldn’t be a shock if it did. That said, it’s much more difficult to build around a frontcourt player than it is around a perimeter player, and Green has superstar potential. He’s an elite scorer and brings an alpha mentality, which Houston needs. They’re reportedly leaning towards taking him as well.

This would be perfect for the Cavs, which have their backcourt secured with Collin Sexton and Darius Garland but have a need at center. Mobley is an elite defensive prospect who doesn’t come around very often. The rarity of his size/skill/athleticism combination holds enough value for Cleveland to lean this direction.

The Raptors have shown a preference of taking the best player available and figuring the rest out later. In this case, it’s Suggs, who will provide needed scoring and playmaking to Toronto’s backcourt, and would be the replacement for Kyle Lowry, who is a free agent.

Forget perfect fit, Scottie Barnes can be that for whoever drafts him. He has the size and wingspan to play center, but also has the ball-handling and vision to play point guard, which he did for the Seminoles in his lone college season. It just so happens that Orlando needs help on the wing and is building an identity based on length and defense. Barnes fits that to a tee.

The Thunder have enough needs and draft picks over the next decade that they will be able to take the best player available. In this case, it’s Kuminga — a high-upside prospect who will make an immediate impact defensively with this size and quickness.

Golden State is rumored to be looking to use this pick to either trade up or trade for a veteran, as their focus is to win now. But, if they keep it, the Warriors could use some backcourt depth and likes role players with a 3-and-D focus. Enter Mitchell, who will be able to play immediately and will help in both areas. He’s also the best perimeter defender in this draft and has the athleticism to excel in Golden State’s up-tempo system, too.

There are rumors that Kispert is not going to make it outside the top 10 in this draft, and those rumors began after he worked out for the Magic. This pick would make sense, too, as Orlando desperately needs shooting help and has the defensive makeup to cover for Kispert’s shortcomings on that end. This would be a surprise to many casual fans but, as the best shooter in the draft, the Magic see this as a great fit.

Buddy Hield isn’t happy in Sacramento, so why not look at a potential replacement in Johnson? The former Vol is an elite athlete with tremendous upside and would be considered a steal if he was still available here.

The Pelicans are looking to trade this pick for veteran help. If they keep it, Bouknight gives them a great prospect with upside to use as a trade piece or as part of their long-term core. He’s an elite athlete and scorer who should excel in the NBA’s wide-open style of play. Bouknight’s draft stock has risen steadily in the pre-draft process, too, after showing better-than-expected shooting.

Again, don’t be surprised if Golden State trades this pick, but Moody would be a terrific pick at this point. The Arkansas product is a certified scorer who can play anywhere along the perimeter and has a good deal of defensive upside.

We don’t know what the futures of Russell Westbrook and Bradley Beal will hold but Washington needs a lot of help just about everywhere else. That should lead to the best-player-available approach, and Thomas makes sense as an elite scorer; Washington doesn’t have many legitimate scoring options outside of their two stars. He’ll be able to contribute immediately off the bench at worst.

Oklahoma City has roughly 8 million first round picks over the next five years (OK, not really; it just feels like it), so they can package some picks to move up in the lottery or to trade for a proven young player. That said, if they keep the pick, this is a great landing spot for Sengun. He will still be 18 years old on draft night and has excelled down low in Europe but may need time to adjust to the pace and physicality of the NBA.

Memphis has built its roster with experienced college players surrounding their two young core pieces in Ja Morant and Jaren Jackson. Murphy fits that mold and brings a lot to the table, too. He has tremendous size, is a knockdown shooter (43.3 percent from three), and quality defender with all-around upside.

The Knicks would be best served to add backcourt help in the draft and Cooper is a value pick here with a high floor and great upside. He is lightning quick and an elite passer with a phenomenal feel for the game. Cooper’s efficiency needs to improve, and he’s not a great shooter, but his production at Auburn (20.2 ppg, 8.1 apg, 4.3 rpg) tells you about his abilities.

The Hawks have built their roster around shooting and versatility. Mann won’t be a star, but he has the size to play either guard position and can both shoot (40.2 percent from three) and facilitate.

After adding to its backcourt two picks earlier, New York lands a long-term frontcourt piece here. While Garuba may not be an immediate starter, the 19-year-old has an NBA body and years of professional experience under his belt. He has the potential to be a real defensive star.

The Lakers need backcourt help and more shooting – both of which are reasons they were bounced from the first round of the playoffs. Springer is the kind of high-upside prospect with the athleticism, three-point shooting chops (43.5 percent), and versatility that should be appealing both immediately and long term.

Johnson is a tough prospect to peg. A five-star player coming out of high school, he underperformed at Duke due to some inconsistent shooting and nagging injuries and left the team before the conclusion of the season. However, he would make sense in Houston, a team that needs help everywhere. Getting him at this spot would be a huge steal.

Houston’s aforementioned rebuild means it can afford to be patient with some high-upside projects. Nix’s stock fell in the G League as both Green and Kuminga had more prominent roles, yet his physical tools and floor-general nature lead me to believe someone will gamble on him in the first round, especially after a strong combine showing. Enter the Rockets, which need help everywhere and can be patient with his development.

Another team in need of a point guard, the Clippers land a good one here at the end of the first round in Hyland. He adds another three-point shooter (career 39.9-percent shooter at VCU) around Kawhi Leonard and Paul George, and showcased the athleticism, playmaking, shot creation, and defense at the NBA Combine that makes him an underrated all-around prospect. He needs to add strength and mature physically, but he has everything he needs to be an effective NBA player.

Philadelphia’s frontcourt play remains strong and the franchise has worked to improve its backcourt, though depth and shooting remain something of a concern. Williams, a top five prospect in the 2020 recruiting class, is an excellent shooter. It’s hard to find a player with his skill, size, and upside at this point in the draft, so Philly should be thrilled.

The Suns are a team full of young talent and don’t have a ton of needs after their breakout season. However, Chris Paul isn’t going to play forever, and they could use some help behind him. We have them adding that backcourt help in McBride, a combo guard with excellent defensive potential who excels at attacking the rim and creating his own shot.

Utah could probably use another point guard to groom long-term but without a slam dunk choice here, the Jazz go for a high-upside prospect who has shown extremely well in the pre-draft process in Thor. He’s an elite athlete who is a fluid defender and has the ability to stretch the floor with his three-point shot.