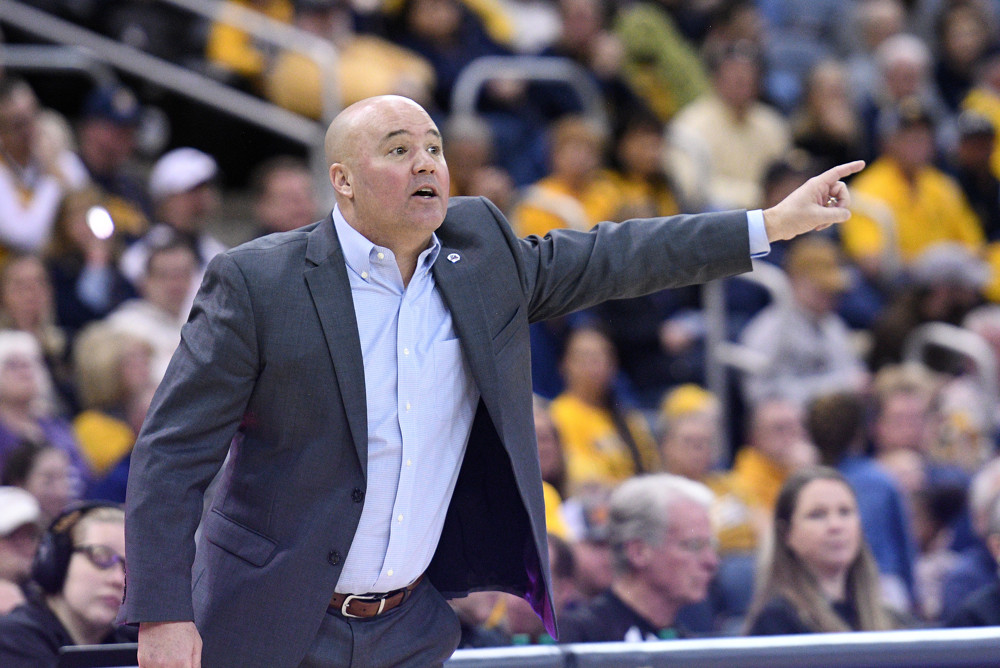 Casey Alexander is proving in Year 2 that he can further the winning culture that Rick Byrd started with Belmont.

The college basketball news cycle has centered around several different teams this season. Gonzaga and Baylor have reigned supreme all year, Texas made a tremendous rise into the Top 5, blue bloods have suffered dramatically, and Drake leaped into the spotlight by holding an undefeated record into February. One mid-major, though, has been so consistently dominant over the years that a 20-1 record isn’t even turning heads.

It should, though, which is why I say to you: Say hello to the Belmont Bruins.

Belmont has been one of the kings of mid-major basketball for the past several seasons as a result of a Hall of Fame coach roaming the sidelines. Rick Byrd took over the program all the way back in 1986 when it was an NAIA school and held the head coaching position for 33 seasons. He guided the program’s Division-I transition and quickly turned the Bruins into a mid-major power across two different conferences after five seasons as an independent.

Under his leadership, the Bruins won six regular-season America East titles and made five NCAA Tournament appearances during 11 seasons. When the program moved to the Ohio Valley starting in the 2012-13 campaign, his dominance on the mid-major scene continued. Coach Byrd led the Bruins to a regular-season or conference tournament title in six of seven years before announcing his retirement after the 2019 season.

Byrd ended his career with an 805-402 (.667) record, making him the 12th-winningest coach in Division-I men’s college basketball history. He made eight total NCAA Tournament appearances and helped create an exceptional academic standard. Belmont has had 17 Academic All-America selections since 2001, the most in the nation.

Byrd was quite simply a legendary coach who propelled this mid-major to several sensational seasons. And yet here we are, with Belmont holding a 20-1 record just a year and a half after his retirement. How?

—BRACKETOLOGY: Belmont on 13-seed line
—ROUNDTABLE: Bruins are a team to watch
—SUBSCRIBE to

The apprentice has become the master

Byrd’s long-time assistant Casey Alexander has filled the head coaching void and picked up right where his mentor left off. Alexander spent 16 years as an assistant with the Bruins before taking head-coaching jobs at Stetson and rival Lipscomb. Now that he is back home at his alma mater, Alexander is making it seem like Byrd never left:

Coach Byrd built Belmont into a mid-major powerhouse with intricate sets that made it into one of the most consistently dominant offensive teams in the nation. Heavy dosages of pick-and-roll and motion led the way and that has continued under Coach Alexander. Constant movement, backdoor cuts, quick ball swings — the offense is a thing of beauty.

As noted in the chart above, the Bruins bought into the 3-point revolution well before most programs in the nation and that has remained a staple for several years. They play at a fast pace, move the ball unselfishly, and can always be counted on for quality shot selection. A program doesn’t rank in the Top 20 in 2-point percentage nationally for that many consecutive seasons by accident, nor does a team shoot that well from three on such high volume by luck.

Belmont experienced plenty of success under Coach Byrd, including eight NCAA Tournament appearances. With that said, though, the legendary head coach won only one game in the Big Dance (in his last season) and never made it past the Round of 64. With Coach Alexander leading the team to a 20-1 record so far this season following an auto-bid last year prior to the tournament cancellation, this could be the year for the Bruins to pull off an upset or two.

Byrd laid the trail for mid-major success, and it is now time for Alexander to push into even brighter times for the Belmont program. With an elite scheme, a dominant big, and plenty of shooters around him, this team is looking more and more like some of the Bruins’ all-time teams.

Grayson Murphy does it all

A pair of juniors lead the way for Coach Alexander this season with Grayson Murphy and Nick Muszynski. These two embody Belmont’s scheme on both ends of the floor while playing pivotal roles in what makes this team go.

Starting with Murphy, the reigning OVC Defensive Player of the Year has continued his strong work on that end of the floor this season. He ranks 20th in the entire nation in steal rate at 4.5 percent while harassing opposing guards. The Bruins rank 58th nationally in defensive turnover rate and his leadership in that department is a major reason why.

Additionally, Murphy is one of the most efficient offensive players in the nation. He is posting 10.5 points per game this season on ridiculous shooting splits. Murphy is finishing on 76.3 percent of his 2s, hitting 34.9 percent from three, and connecting on 75 percent of his free throws. These marks slot him at 11th nationally in offensive rating (121.7).

Murphy’s do-it-all ability doesn’t stop at just defending and scoring, though. He also leads the team in rebounds (7.5) and assists (5.1) per game. Murphy’s 3.06 assist-to-turnover ratio ranks 25th nationally. He simply does everything well while pushing the Bruins to success. As a result of his impressive all-around numbers, he ranks fifth in KenPom’s OVC Player of the Year race.

Murphy is the straw that stirs the drink for Belmont, even though he is not the leading scorer. That mark belongs to junior Nick Muszynski.

The 6-11 “Moose” is the primary big man in the rotation and has already turned in a pair of All-OVC seasons. He is leading the team in points (15.3) and blocks (1.6) per game this season as a two-way contributor. Muszynski has seemingly flown under the radar for the past two campaigns as Dylan Windler (NBA) and Adam Kunkel (now at Xavier) received praise for their efforts. Now, Muszynski is shining bright as the team’s leading scorer.

He is handling the pressure well and has a more balanced supporting cast around him than ever before. Due to so many others stepping up, “Moose” has not had to increase his usage or suffer a dropoff in field-goal percentage since Kunkel’s departure. While not much a threat from 3-point range, Muszynski is finishing 61.6 percent of his 2-point attempts and is over 75 percent at the free-throw line. Considering he draws fouls at a Top 100 rate in the nation, his efficiency on those attempts is huge.

On the defensive end, he ranks 115th nationally in block rate (5.9 percent) as he anchors the team inside. Belmont’s defense only ranks 174th in adjusted efficiency, but the juniors Murphy and Muszynski make life difficult for opposing offenses.

Muszynski is also a strong passer with 1.9 assists per game. Belmont’s offense features many quick passes to create open looks but also runs a motion set around post-up opportunities for “Moose.” He has excellent footwork in the post and is a seasoned vet in this offensive system. He is the current leader for KenPom OVC Player of the Year and deservedly so.

It certainly doesn’t hurt that Coach Alexander surrounds “Moose” with some of the best perimeter shooting depth of any team in the entire nation. The inside-out game is incredible.

As discussed earlier, Belmont has been one of the best perimeter shooting programs in the country over the last several years. This season is no different. The Bruins are shooting 37 percent from three (46th nationally) through their first 21 games on the 59th-highest attempt rate in the nation. With an assist rate above 60 percent, this team moves the ball exceptionally well to create open looks.

Perhaps even more importantly, the Bruins have tons of shooting threats. Quality ball movement only matters if you have the players capable of finishing off plays. With their depth of shooters, Belmont doesn’t have to run set plays designed to get one sniper open like other schools might require. Instead, they can just run their normal offense around Muszynski in the post and create the best look possible from their excellent group of marksmen.

The national average for 3-point percentage is 33.3 percent this season; Belmont has eight shooters matching or exceeding that mark. This includes Luke Smith, who leads the team in minutes, 3-point attempt rate and 3-point percentage. He is a Division-III transfer making the most of this opportunity.

While some shooters are more efficient than others, the fact is nobody can be left alone on the perimeter when playing Belmont. They will make you pay more often than not and can build big leads as a result. The Bruins have won 13 of their 17 games during this current winning streak by double digits and are blowing out most opponents.

Belmont admittedly plays in just the 24th-toughest conference in America, but its level of dominance should not go overlooked. If it wasn’t for a horrible performance in just their fourth game of the season in a loss to Samford, the Bruins would still be undefeated for the whole year rather than just in conference play. Belmont has six more OVC games scheduled and is given a 24.3 percent chance of finishing 20-0 by KenPom.

Coach Alexander’s team will likely end the regular season with one of the best winning percentages in the nation. As a result, the Bruins could be poised to land one of their highest-ever NCAA Tournament seeds if they can secure the OVC’s automatic bid (an at-large would be a long shot given a weak schedule despite the win-loss record).

How does this team compare with Belmont’s best?

Belmont is currently ranked No. 82 in KenPom’s adjusted efficiency margin (AdjEM) statistic. This is definitely a very good season for the Bruins in the “quality metric” department, but it also is not their best. In fact, Coach Byrd led four teams that finished higher in AdjEM during the KenPom era. This includes the 2011 and 2012 teams that finished 23rd and 25th in the statistic, respectively.

The big key, though, is that Belmont appears poised to land one of its best postseason seeds ever if continues on this path. Belmont is currently projected to land a No. 13 seed according to bracketologists on the Bracket Matrix. Our projection here at Heat Check CBB has them slotted as a No. 13 as well.

However, there are still a few weeks left in this unpredictable season. As a result, Belmont’s best chances to rise in team-sheet metrics perhaps still remain; five of its remaining six games come against teams ranked in the KenPom Top 200. The Bruins have only played four such games to date. While it’s possible that the increase in competition could result in a loss, Belmont will be favored to win each game.

T-Rank’s seed projector, which takes into account future games as well, believes that Belmont’s most-likely placement will be as a No. 12 or 13 seed. They have only received a 12 or better twice in their (limited) history:

If Belmont reaches the NCAA Tournament this season, it could be in its best position ever to pull off an upset. With elite shooting ability and an interior star, the Bruins have the potent offense needed to rain threes on an unsuspecting high-major or two.

No matter what, though, Alexander is not only following in the footsteps of his legendary mentor but looks poised to forge ahead and propel Belmont even further. Byrd retired in his prime of leading the Bruins and the future is still bright thanks to the program’s foundation and the ongoing tradition that Alexander pushes forward.