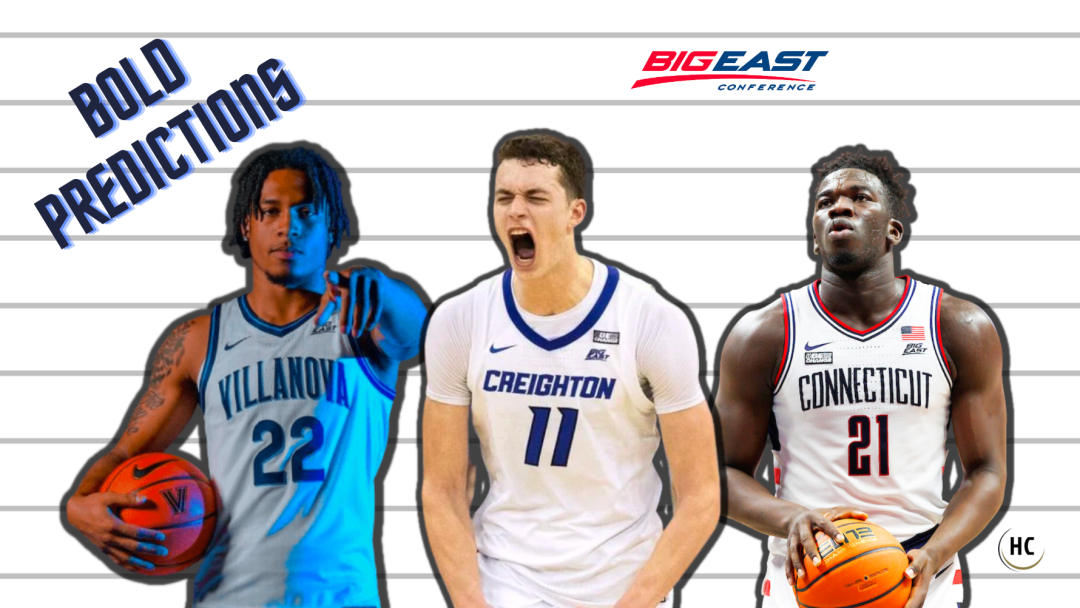 Villanova has been the Big East’s best team for a decade but that might change this coming season. What else does the league have in store?

The Big East has been dominated by Villanova since the conference went through realignment a decade ago. But now, following Jay Wright‘s abrupt retirement and the addition of other high-profile coaches across the league (hello, Thad Matta, Sean Miller and Shaheen Holloway), the conference appears to be as wide open as it has been in recent memory.

Creighton is the only Big East team other than the Wildcats to be ranked in the AP preseason poll and the Bluejays find themselves in the top 10. However, Xavier was also picked to finish ahead of Villanova in the league’s preseason coaches poll and are one of six teams from the conference projected to make the NCAA Tournament, according to Heat Check CBB bracketologist Lukas Harkins.

With so many good teams — and perhaps no elite team depending on personal thoughts on Creighton — the Big East projects to be unpredictable. But that’s what makes the sport fun, particularly in a league that hasn’t had this kind of recent uncertainty.

So, what crazy things might happen in the Big East in 2022-23? Here are five bold predictions.

Even if Villanova doesn’t win the conference this season, the Wildcats will have the best player. Whitmore, a five-star freshman, is expected to step right into new head coach Kyle Neptune‘s starting lineup and be the go-to guy the roster needs.

The 6-7, 232-pounder is an elite athlete who excels at attacking the rim, using his power and agility to get into the lane whenever he wants. He’s also an incredibly versatile defender, but that combination of athleticism and scoring acumen makes for some really fun highlights.

Whitmore is recovering from surgery on his right thumb and may miss a small amount of time at the start of the season, but there’s no doubt about his role when he’s on the court.

With Justin Moore out with a ruptured Achilles he suffered in the Elite Eight, there is no elite scorer on the roster outside of Whitmore. Caleb Daniels, Eric Dixon and Brandon Slater are all quality role players while fellow freshman Mark Armstrong will be tasked with running the point. Whitmore will have to be the guy.

There are other high-quality players in the Big East like UConn’s Adama Sanogo, Creighton’s Ryan Kalkbrenner and Providence’s Jared Bynum, among others, but Whitmore has more raw ability — and perhaps more opportunity in his role — than anyone.

2) Butler finishes in the top half of the league

There is a chance Chuck Harris plays his way into the Player of the Year conversation as well if Butler has a breakout season as some project. With parity at the top of the league, the Bulldogs have an intriguing combination of returning production and proven high-major transfers to pair with one of the nation’s best coaches in Matta.

Harris saw a dip in efficiency during his sophomore season as his role increased but still showed flashes of effectively carrying a heavy load offensively, headlined by his 29-point outing against Xavier in the Big East Tournament. Simas Lukosius showed similar flashes during his freshman season and scored 27 points in the same game against the Musketeers.

That performance showed Butler fans this duo’s potential. There are a solid group of role players returning, but the transfers Matta brought in will help support the pair and could alter this team’s identity.

That starts up front with Manny Bates (NC State) and Jalen Thomas (Georgia State). The two big men have been among the nation’s top shot-blockers throughout their three seasons in college, immediately upgrading Butler’s rim protection (311th nationally last season).

Purdue transfer Eric Hunter Jr. projects to start in the backcourt and was one of the best perimeter defenders in the Big Ten. Adding him up top with Bates and Taylor at the rim could help the Bulldogs boast one of the conference’s best defenses.

If that happens, along with the projected improvements from Harris and Lukosius (and contributions from Akron transfer Ali Ali, an All-MAC selection last season), Butler will find itself among the league’s better teams. I’m willing to bet that will happen.

3) St. John’s has the worst 3-point shooting of any high-major team

There is some hope that St. John’s will be an NCAA Tournament team this year because of the roster’s name recognition. Posh Alexander is a preseason first team all-conference selection, Andre Curbelo transferred in from Illinois, and head coach Mike Anderson has had success at past stops, most notably Missouri.

But that neglects how the pieces on the roster appear to fit together. Alexander and Curbelo, while good individual players, both need the ball in their hands to be effective. There also won’t be much spacing on the offensive end for either to operate.

Why? The Red Storm project to be a dismal shooting team.

Alexander shot just 21.7 percent from three last season. Curbelo is a career 16.9 percent shooter beyond the arc. No one in The Almanac‘s projected starting lineup shot over 30 percent from deep in 2021-22.

The Johnnies won’t be terrible overall — they’re too good defensively and their up-tempo style will give teams trouble — but the school could build a new arena with all of their long-range bricks this season.

4) DePaul returns to the conference’s basement

The Blue Demons have had a nice few seasons in a row now, relatively speaking. DePaul hasn’t finished last in the Big East in three of the last four seasons (remember the #RankDePaul movement back in 2018-19?) and finished the regular season at .500 or above twice in that span.

Tony Stubblefield’s first season was a relative success. The Blue Demons started the year 9-1 with wins over Rutgers and Louisville and, despite going 6-14 in Big East play, finished 15-16 and in ninth place in the league.

For starters, there are fewer bad teams in the Big East. We just touched on Butler and the Bulldogs finished right alongside the Blue Demons at 6-14. St. John’s and Xavier both finished with sub-.500 marks in league play and are expected to improve. Even Georgetown, which did not win a single Big East game a season ago, will be better.

DePaul likely got worse. It lost its three leading scorers from last season, headlined by star Javon Freeman-Liberty (21.7 ppg, 7.3 rpg) and David Jones (14.5 ppg, 7.4 rpg). They are being replaced by mostly up-transfers (Umoja Gibson is the exception) and freshmen. The Blue Demons also project to shoot nearly as poorly as the Red Storm as and only three players made at least 30 percent last season.

This group has its work cut out for it and may return to the Big East cellar as a result.

5) There is a shared regular season title

Back to the top of the league. It might be a cop out to say that I don’t know which teams will actually split the regular season title, but there is just too much parity at the top to anticipate much separation.

Part of that is a referendum on Creighton. The Bluejays will be very good this year and will probably be the Big East team with the most postseason success, but they could get beat up a little bit in league play.

Providence won the league last year and has a capable roster yet again. UConn is poised to take the next step under Dan Hurley while Xavier hopes to do the same with Sean Miller in tow. And we know better than to count out Villanova, which still has one of the best cultures in the sport and may have the best player in the conference.

This is going to be the most thrilling race in any of the sport’s high-major leagues — one that may not result in a sole victor.