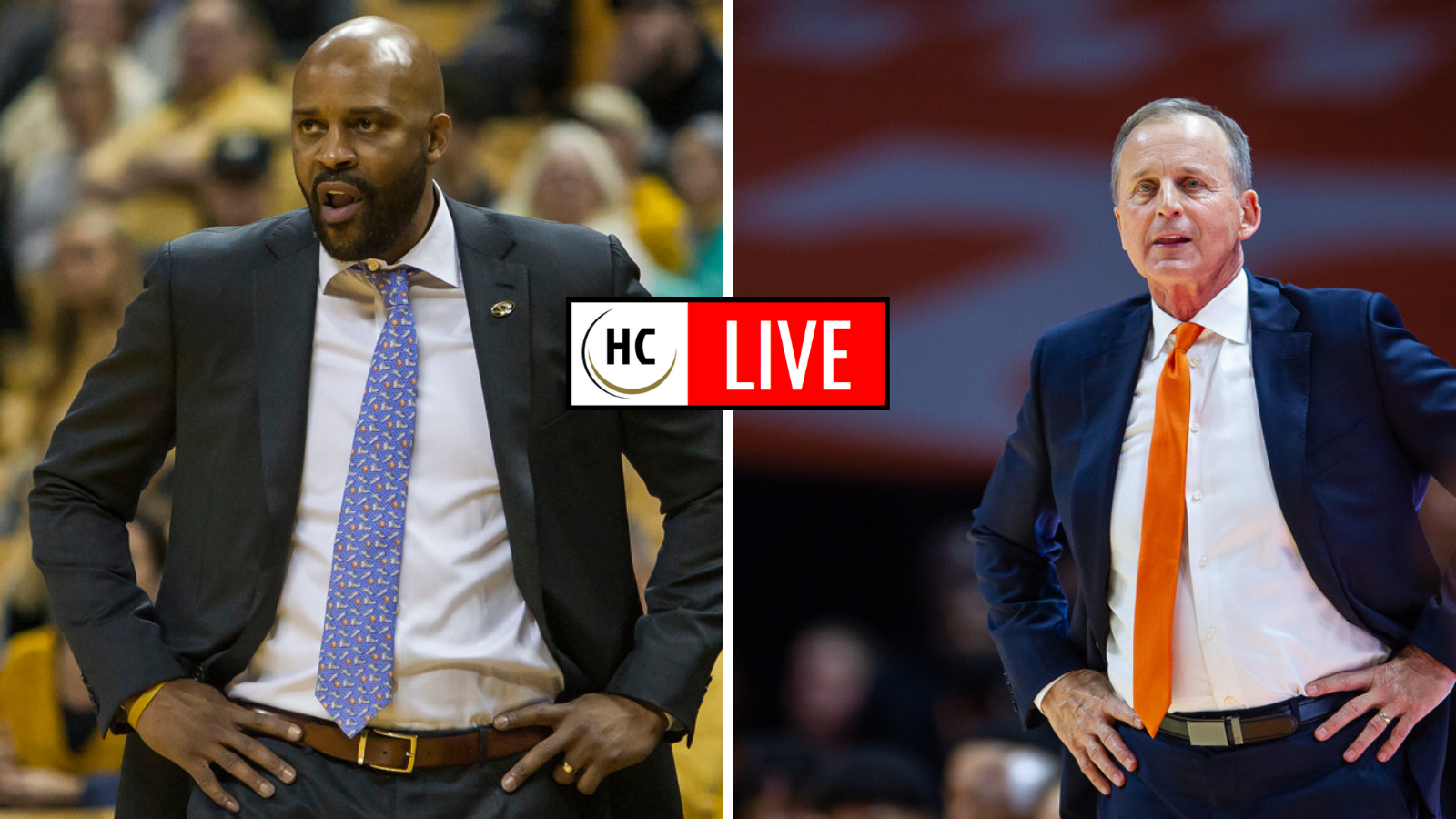 Welcome back to another college basketball Saturday, where we are, once again, keeping you posted with all of the national storylines, highlights, scores and updates from the day’s action.

Grab a beverage, get comfortable, and let our blog be your remote throughout a huge Saturday slate. Follow along below or check back later on what you missed.

12:40 a.m.: In a truly fitting end to a crazy day of upsets, Oregon State completed a road win over No. 21 Oregon, winning 75-64 in Eugene. This was the *sixth* win over a Top 25 by an unranked opponent today (and that doesn’t even mention the ranked teams that lost to other ranked teams!). It was one of our favorite Saturdays of the year so far, and we thank you for joining us!

Until next week, let me remind you exactly where I come from:

11:47 p.m.: The Beavers in the midst of a 10-1 run right now, and there were no bigger points than these two on the MASSIVE flush from Oregon State’s Warith Alatishe!

11:24 p.m.: We said we’d check in if anything crazy should happen. We’d say this qualifies… (and no, we’re not talking about Oregon State leading No. 21 Oregon going into halftime…):

10:53 p.m.: Here is a quick check-in on the last few games of the night! We’ll be here if anything big should happen, but things are starting to wind down here at the Heat Check Live Blog. We hope you’ve enjoyed spending some of this wild Saturday with us!

10:34 p.m.: Cuonzo Martin and Missouri just picked up a massive victory over Tennessee– their fifth Quadrant 1 win of the season so far, behind only Gonzaga. We’re clapping, too, Coach.

10:12 p.m.: As we approach five minutes to play in Knoxville, Missouri is in full control. The Tigers should see a nice boost in the rankings if they hold on.

10 p.m.: This news that Michigan athletics have been suspended due to positive test(s) for the B.1.1.7 COVID-19 variant will likely dominate the national discourse around the sport for the near future. Something to watch for.

9:52 p.m.: No. 13 Virginia survives a huge scare from Georgia Tech on their home floor as the Jackets can’t get a buzzer-beater to fall. Two fantastic defensive plays in a row, which is exactly what you would expect from Virginia. Don’t sleep on this Tech team, though.

9:49 p.m.: WHOA! This one comes from Division II, as Dallas Baptist pulls off one of the most spectacular buzzer beaters you’ll ever see!

9:46 p.m.: Kihei Clark with a massive shot to get off the schneid, having missed his first eight shots against Georgia Tech. The Cavs lead by just two points against a dangerous Yellow Jackets club with only a minute to play. Exciting stuff in the ACC!

9:43 p.m.: STRONG move from Jeremiah Tilmon Jr. here against Tennessee. Missouri still leads as we near the first media timeout in the second half.

9:36 p.m.: We’re back after a little break, and so are Missouri and Tennessee! The Tigers are up 42-34 on the Vols early in the second half, riding a strong first half from Xavier Pinson.

8:13 p.m.: In two other notable results, Kentucky rebounded from some recent losses to take down LSU, and DePaul landed a surprise punch against a Marquette team that has struggled to find consistency this season.

8:06 p.m.: A WILD ONE IN WINSTON-SALEM! Wake Forest holds on for their first ACC as Xavier Johnson’s potential game-winner won’t go. Pittsburgh got a huge break to even get that final possession, but you have to feel good for Steve Forbes and this Demon Deacons team today.

8:04 p.m.: Oh this is going to be a MESS! See ya in twenty minutes when the refs are done looking. HUGE moment in this game. Initial call was Pitt basketball.

8:01 p.m.: Pitt is trying to stave off an upset from Wake Forest, and this Xavier Johnson deuce with 8 seconds left has the Panthers back within a point… but they still have work to do against the Demon Deacons.

7:55 p.m.: No. 18 Alabama is one of the few ranked teams to avoid an upset at the hands of its unranked opponent, eventually outlasting Miss State to move to 8-0 in SEC play. This Crimson Tide team has been on a tear lately, as our Lukas Harkins recently detailed.

7:51 p.m.: Now that Stanford pulled off their upset, Miss State is trying desperately to stay with No. 18 Alabama. Here’s a look at Jaden Shackelford and DJ Stewart Jr. trading threes. Bama up 76-71 with just over a minute to play.

7:17 p.m.: Halfway through overtime, Stanford holds a four-point lead over No. 24 UCLA, thanks to this latest three-pointer from Spencer Jones.

7:07 p.m.: UCLA gets a stop on Oscar da Silva, setting up this Tyger Campbell shot at the buzzer…. (unfortunately for the Bruins, it wouldn’t go down) OVERTIME IN SANTA CRUZ!

7:03 p.m.: Just a perfect possession here near the end of the game for Northern Kentucky, and it seems like this Trevon Faulkner bucket will likely ice the game for the Norse.

6:53 p.m.: Northern Kentucky hits a game-tying layup with 5 seconds to play and stop Robert Morris from getting a potential game-winner at the buzzer. OT in Moon Township!

6:47 p.m.: Some revenge brewing? UC Davis, UT Arlington, and Youngstown State all dropped the first games of these series, but are in control late in Game 2. What an interesting wrinkle to the season these series have been!

6:45 p.m.: After trailing early in the first half, Alabama has hit their stride and take a 40-33 lead into halftime against Miss State. Out west, UCLA had come back to tie the game against Stanford, but currently trail by a point at the under-8 timeout. Kentucky, for their part, is building a big lead over LSU, up two touchdowns on the Tigers and leading 42-28 with three minutes to go in the first half.

6:34 p.m.: Meanwhile, the A-10 continues to struggle. Its best team, Saint Louis, has been paused for a month now, last playing on Dec. 23. Its other Top 25 entrant from this season, Richmond, has fallen off the map and lost again today against LaSalle. Dayton keeps losing bad games (or losing badly to good teams?). That trend continued Saturday with a 66-43 loss to VCU. The Rams have looked up-and-down but nothing to write home about. St. Bonaventure may be the most promising team currently playing in the A-10. So, naturally, I expect they will lose to Duquesne today.

6:30 p.m.: Are we going to see even more ranked teams go down today?!?! No. 18 Alabama and No. 24 UCLA are both trapped in tight games, taking on Miss State ad Stanford, respectively.

Here are the ranked teams that have lost so far on Saturday:

6:02 p.m.: Matthew Hurt fouls out after a special performance with 1:50 to go and Duke up one over Louisville.

4:52 p.m.: The refs missed one here as Zed Key gets some undue credit for a heads-up playground move to throw the ball off Nate Reuvers. No. 15 Ohio State up 27-17 on No. 10 Wisconsin in the first half.

4:33 p.m.: Florida State is currently up 63-28 over No. 20 Clemson. WOW. Here are some highlights from yet another “upset”. (Kinda hard to imagine that this FSU team isn’t ranked.)

4:26 p.m.: If you would’ve told me before the season that this Duke-Louisville game on January 23 would feature exactly zero ranked teams, I would’ve called you crazy. What a world.

4:25 p.m.: Sacramento State holds on after Montana simply can’t make a bucket at the end of the game. Big win for Brian Katz and company. Hornets were down 14 in this game, but win in 2OT.

4:19 p.m.: Lest we be accused of only covering the high-majors, please note that we’ve got a TIGHT ONE out in the Big Sky between Sacramento State and Montana, who are currently in double overtime. Hornets lead 84-83 with 40 seconds to play.

4:12 p.m.: In the day’s second instance of an unranked team knocking off a Top 25 opponent (Syracuse blasting VT earlier was the first), Maryland went into The Barn and took care of business against #17 Minnesota. The Terrapins have one of the more confusing resumes in basketball, but there’s no arguing that this is a big, big win for Mark Turgeon.

4:04 p.m.: Congratulations to San Jose State for picking up their first Division I win this year!

Put it in the win column! Spartans pick up first MW win!

Dalcourt, Mendoza, Agee and Smith all finish with 16 points while Moore finishes with 14#SpartanUp pic.twitter.com/aphiTlGBdD

4:02 p.m.: Forget whether the dunk went down. Get yourself a hype man like Davion Mitchell:

3:55 p.m.: Providence and No. 3 Villanova are currently in a delay due to a light issue, so that’s interesting.

3:48 p.m.: Jared Butler in takeover mode once again for Baylor, giving the Bears a comfortable lead after trailing at halftime.

3:29 p.m.: Unusual day at “The Barn,” this season’s most challenging home venue — Maryland has opened an 11-point lead in the second half over No. 17 Minnesota with 11 minutes to go.

3:19 p.m.: Solid start by Providence against Villanova, holding the Wildcats to just 16 points with a little over three minutes to play in the first half.

3 p.m.: Oklahoma State takes a 36-33 lead into the break against #2 Baylor, marking just the second time all season that the Bears have trailed at halftime. (The other instance came against TCU.) Maryland is also beating a ranked opponent, holding a 36-27 lead over #17 Minnesota after twenty minutes of play. In some other notable games: Florida leads Georgia 42-39 at the break; North Carolina has a ten-point halftime lead over NC State, and #3 Villanova and Providence are just getting things underway at Finneran Pavilion.

2:56 p.m.: Never a bad thing when Bill Raftery is comparing you to Bill Russell!

2:53 p.m.: It’s a game of runs in Stillwater. After the Cowboys went on an 8-0 run to build the lead to nine, Baylor responded with an Adam Flagler three and this dunk from Jonathan Tchamwa Tchatchoua:

2:48 p.m.: Meanwhile, over at The Barn (normally a fortress for Minnesota), the Terrapins are building a sizeable advantage over the Gophers heading into the break. Terps up nine.

2:20 p.m.: The #11 Creighton Blue Jays held court in a pivotal matchup against #23 UConn, who are still playing without star James Bouknight. Creighton won 74-66, behind 20 points from Denzel Mahoney and 15 more from Marcus Zegarowski. After dropping back-to-back games against Butler and Providence, this was a HUGE bounce-back win for the Jays.

2:15 p.m.: We’ve got a good one brewing between Baylor and Oklahoma State, but can the Cowboys hang for 40 minutes without Cade Cunningham? Time will tell… but for now, just enjoy the glory of Bill Raftery.

2:00 p.m.: And there you have it! The Oklahoma Sooners have knocked off a Top 10 Kansas team! Davion Harmon had 22 points in the win.

1:56 p.m.: It’s become a game of free throws in Oklahoma-Kansas. If the Sooners can hold on, this will be a MASSIVE resume win for Lon Kruger’s club. Jayhawks are starting to slip a little.

1:53 p.m.: An Ochai Agbaji three-pointer has Kansas within five, but the Sooners are in the driver’s seat late in Norman.

1:44 p.m.: Syracuse has opened up a 19-point lead over No. 16 Virginia Tech at home. Alan Griffin already has a double-double with 15 points and 10 rebounds with six minutes to play.

1:28 p.m.: Things are heating up between UConn and Creighton. Mitch Ballock continues to unload from deep.

1 p.m.: Man, what a half from Auburn freshman Sharife Cooper.

12:45 p.m.: First batch of halftime scores of the day is below; Creighton leads UConn 23-13 with six minutes to play in the first half.

12:11 p.m.: Kansas and Oklahoma trading baskets early over on ESPN. Meanwhile, a super slow start between UConn and Creighton with just two points to show for after nearly three minutes of action.