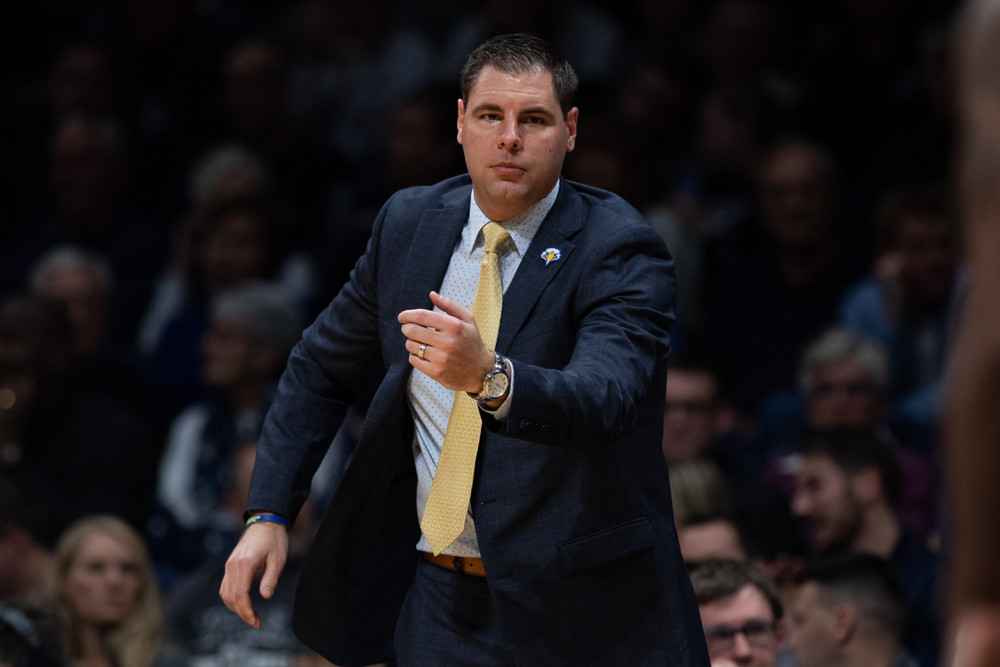 With 10 different conference tournaments in action on Saturday, here’s what to watch for in each of them.

There will be 10 different leagues playing tournament games on Saturday, so we at Heat Check CBB are here to help you keep it all straight. From the first Big Dance ticket being punched in the OVC, to the first-round snoozer out in the CAA, this primer should help you get up-to-date with everything going on today.

Here’s what to watch for in Saturday’s conference tournament action. All times Eastern.

The Racers can wrap up a magnificent season in style with an OVC Tournament title to go along with the regular-season trophy that Murray State has already earned. KJ Williams and Tevin Brown might be the best duo in the country, but they will face off with the reigning OVC Tournament champs in Morehead State.

The Eagles pulled off a massive win on Friday night over Belmont, secured with a block by the league’s top defensive player, Johni Broome. Murray State is likely in the Big Dance no matter what, so mid-major fans should root for Morehead State to punch the first ticket to the NCAA Tournament.

Arch Madness is down to the best four teams in the conference, and that’s an extremely good thing for casual viewers. By virtue of beating each other up all year long, each one of these teams is likely fighting for its NCAA Tournament life in Saint Louis. The first matchup pits together two of the Missouri Valley’s most notable past Cinderellas, Northern Iowa and Loyola Chicago. With the Ramblers on their way out of the league, UNI may be keen to keep Loyola from one last MVC Tournament win. These two teams split the season series, so expect some fireworks in the rubber match.

In the later game, Drake is still hunting for a chance to make it back-to-back trips to the NCAA Tournament, while Missouri State’s dynamic duo of Isiaih Mosley and Gaige Prim are looking to go dancing for the first time. Drake swept the season series, though, and the Bulldogs have won six straight coming into the semifinals. All bets are off here. Any one of these teams could win it all — so expect both games to go down to the wire.

In case you haven’t been paying attention, the Big South Tournament has been incredible so far. Through the first round and the quarterfinals, there were five overtime periods played, one buzzer-beater in regulation, and a one-point game decided by a missed free throw with 0.1 on the clock. Two survivors of those early rounds will meet in a matchup of two teams that have never been to the Big Dance — league champion Longwood and USC Upstate, which is playing for a head coach who just lost his wife to cancer — so those are easily the two best stories.

In the other semifinal matchup, Winthrop and Gardner-Webb represent the Big South status quo, with both having danced recently. Expect Longwood and Winthrop to advance — but don’t expect Upstate and Gardner-Webb to go down easily. Winthrop has been to the NCAA Tournament a lot, so casual fans might want to back the Lancers of Longwood. There’s nothing better in early March than seeing a team punch its first-ever ticket.

While the ASUN may be seen as a one-pony show thanks to the sustained success of Liberty these past few seasons, that is not quite accurate. First, Darius McGhee — the nation’s scoring total leader — and the Flames will need to get past Bellarmine, a team playing for pride because the Knights are still ineligible for the NCAA Tournament as part of their transition to Division I. While Bellarmine has been quite good in its first two D-1 seasons, Liberty has beaten the Knights in both meetings thus far.

In the other semifinal, two similarly named teams from different states square off. Jacksonville State, which is located in Alabama, should be the favorite here. The Gamecocks can stroke it from deep, and a talented JSU offense is headlined by Darian Adams, Demaree King, Jalen Gibbs and Jalen Finch. Meanwhile, the Dolphins — based out of Jacksonville, Florida — are led by one of the country’s top point guards in Kevion Nolan. Adding to the ASUN excitement: both Jacksonville State and Jacksonville beat Liberty this year.

Bryant came on strong at the end of the year, finally overtaking Wagner by beating the Seahawks in the regular-season finale last weekend. Now, the Bulldogs — led by the nation’s leading scorer, Peter Kiss, and fellow 20-point scorer Charles Pride — look to shut down Mount St. Mary’s attempts at a repeat NEC Tournament trophy.

In the other semifinal, Wagner faces off with a dangerous Long Island team. Alex Morales has done incredible work to keep the Seahawks going, but Wagner followed up its 17-2 start with a 3-3 finish down the stretch without injured Elijah Ford. LIU, on the other hand, is streaking as the season ends. The Sharks have won seven straight since losing to Wagner (with Ford) on Feb. 5. Now, exactly a month later, Ty Flowers and Eral Penn could lead LIU to the NEC Championship game. Flowers and Penn are combining to average 36.1 points, 15.3 rebounds and 2.7 blocks every night. While Wagner and LIU would be fun, Bryant is hunting for its first-ever NCAA Tournament.

The WCC’s oddball tournament format ensured that neither Gonzaga nor Saint Mary’s would have to suffer quarterfinal loss, giving both teams double-byes into the semis. While the league’s two ranked teams won’t be playing on Saturday, there are still plenty of storylines to follow. Can San Francisco pull out of a nosedive and save themselves some Selection Sunday sweat? Can BYU finally bounce back from an injury to Gavin Baxter that derailed a promising season? The winner of that game will go on to face Gonzaga, so this might be the last chance to make a good impression on the Selection Committee.

In the other quarterfinal, both Santa Clara and Portland have had surprisingly good seasons. Herb Sendek has a well-balanced club that does have a victory in hand over potential semifinal foe Saint Mary’s. Portland, on the other hand, has dug itself out of the cellar under first-year head coach Shantay Legans — who took Eastern Washington to the NCAA Tournament last year and nearly pulled off an upset of Kansas.

One of two conferences with a full four-game quarterfinal round on Saturday, the SoCon should provide wall-to-wall action all day. Chattanooga is the favorite, but Malachi Smith and the Mocs will have their work cut out for them from the outset against a dangerous Citadel team led by the dynamic Hayden Brown.

In the second game, Wofford and VMI are both capable of winning this entire tournament, and VMI’s Jake Stephens — think low-major Chet Holmgren — might be the most exciting college basketball player you don’t know about.

Furman, led by Jalen Slawson, is the top challenger to Chattanooga’s NCAA Tournament hopes, but the Paladins must get through the difficult task of playing Felipe Haase and Mercer.

Finally, in the last game, Ques Glover and Samford look to continue an impressive run that saw the Bulldogs grab a surprising No. 3 seed. The reward is a tough matchup with UNC Greensboro, which is led by the guard duo of De’Monte Buckingham and Kobe Langley. Buckle up for a wild day.

The other four-game slate on the docket, the Sun Belt quarterfinal round should provide a ton of excitement in its own right. Top-seeded Texas State is looking to make it two in a row under head coach Terrence Johnson, but Bob Marlin’s Louisiana team has enough talent on the roster to pull off an upset.

Speaking of upsets, 12-seed Little Rock already scored one against South Alabama in the opening round — could the Trojans make it two by toppling Troy?

In the third matchup, third-seeded Georgia State takes on league POY Norchad Omier and the Arkansas State Red Wolves. The Panthers likely have the better team, but Omier is a threat to put in a 30-point double-double on any given night — and he did just that against UL Monroe in the first round.

Wrapping things up on Saturday, defending Sun Belt Tournament champs Appalachian State look to ground the Eagles of Georgia Southern. Expect a lot of close games out of the Sun Belt on Saturday, with Arkansas State likely holding the best upset potential.

There are only eight teams in the Summit League Tournament, and the conference does not give out first-round byes (or double-byes) to its top teams. Instead, it gives them an extra day of rest — which is why two quarterfinals will be played on Saturday, with the other two taking place on Sunday.

The first game pits league champions South Dakota State up against an Omaha team with just five wins all year. The Jackrabbits romped through the Summit League to the tune of an 18-0 record, so this would be an absolute shock to see an upset here.

Likewise in the second game — North Dakota State ought to run away with this one. The Bison did have a little stumble against Kansas City a few weeks ago, but NDSU has won 10 of 12 since Jan. 22. Not shown here are Sunday’s matchups, which are highlighted by Max Abmas and the Oral Roberts Golden Eagles — the No. 3 team in the tournament and the Cinderella of last season’s March Madness proceedings. Expect a slow couple days before things pick up in the semis.

There’s not a ton to say about this matchup, other than the fact that it will open up yet another one of our conference tournaments. Northeastern was thought to be one of the top teams in the league coming into the year, but Bill Coen’s team struggled to the tune of just two wins in the CAA. Meanwhile, William & Mary has one of the least efficient offenses in the country, as well as the lowest-rated defense in the league. While the Tribe won the first matchup 71-70, Northeastern held William & Mary to just 28 points in the rematch on Feb. 24. If you happen to have FloSports and you enjoy pain, this one’s for you.