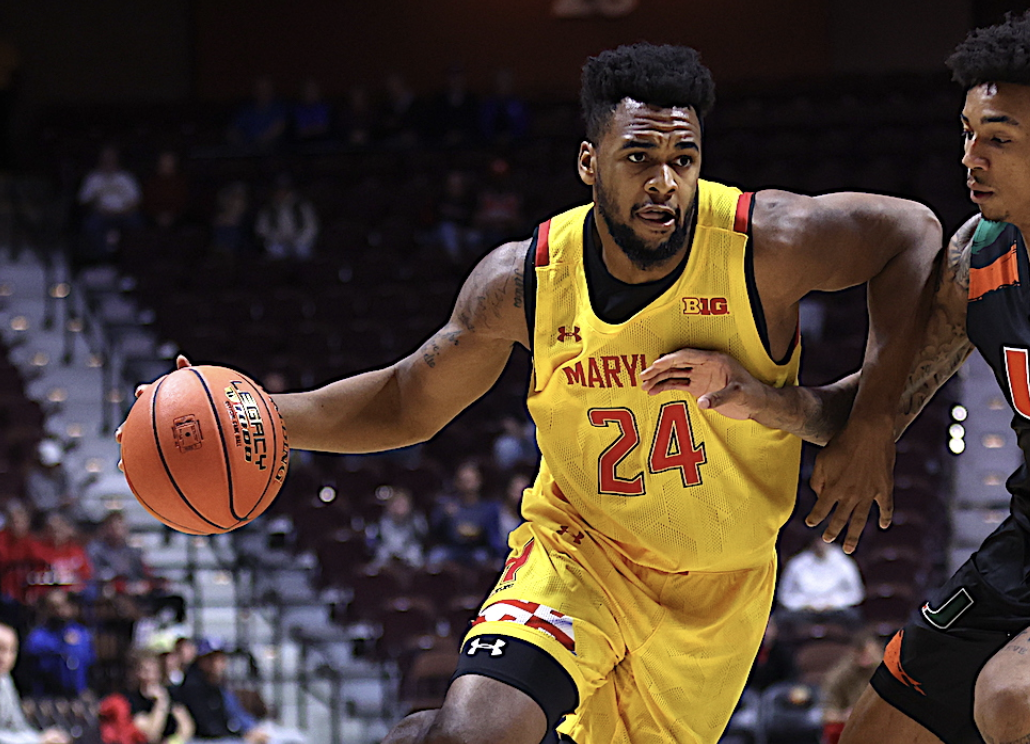 MARYLAND HAS BEEN MORE HARE THAN TORTOISE THESE FIRST FEW WEEKS, AND SENIOR DONTA SCOTT IS THE CATALYST BEHIND THE TERPS’ HOT START.

The Big Ten has been full of surprises this year. From Purdue exploding into a top-five team to Ohio State deploying the nation’s third-ranked offense to Northwestern playing stingy defense, the league has already defied preseason expectations. (Heck, even Nebraska beat a ranked Creighton team!)

Even with all those intriguing storylines around the league, Maryland’s hot start might be the most remarkable of them all. After last season’s 15-win debacle, the Terps were picked 10th in the Big Ten preseason poll and 11th in The Almanac. (Also, a certain college basketball writer pegged them at 12th… yikes!). Now, a month into the season, Maryland sits at 8-1 in the standings with statement wins over Saint Louis, Miami (FL) and Illinois.

So what spurred such a drastic — and quick — turnaround?

—RELATED: Jahmir Young is a star for Maryland

For one, new head coach Kevin Willard has coaxed the maximum efficiency out of both Charlotte transfer Jahmir Young and senior wing Hakim Hart. Additionally, sophomore big man Julian Reese finds himself in the middle of a breakout campaign (12.3 ppg, 7.6 rpg, 75.9 percent from the field).

But senior forward Donta Scott has functioned as the linchpin of the Terrapins’ early success. His versatile skillset has transformed Maryland’s offense — the 6-8 veteran scores just as potently on the perimeter as he does in the paint.

Speaking with Scott in the middle of his career year, the senior traces his substantial gains on the floor to his substantial weight loss during the offseason. Thirty pounds to be exact.

“It made me quicker and more explosive on the perimeter,” Scott says of his body transformation. “I’m not just going down to the post…there’s a lot more explosiveness and speed behind my game. I move a lot faster on both ends. I’m able to help my teammates more on rotations.”

It certainly shows. Scott has upped his effective field goal percentage by four points and has looked especially confident relocating for 3s and attacking off of shot fakes.

Of course, that move becomes all the more lethal due to Scott’s long-range efficiency. He is averaging a career-high in made 3-pointers per game and doing so at a 37.5 percent clip.

Beyond his scoring, the senior’s passing acumen has elevated the Terps. He squeezes the ball into tight coverage out of ball screens and whips crosscourt dimes from the post, blessing his teammates with open looks.

Scott emphasizes that he has always focused on being a skilled facilitator.

“I’ve been doing this since I was younger,” the senior says. “My coaches knew I had this ability even when others didn’t believe in me.” He further credits ball-handling and hand coordination drills in his AAU days to his development.

However, Scott also cites some more unorthodox influences on his game, too. While some were glued to the TV sets for March Madness or the NBA Playoffs, Scott found inspiration elsewhere, far from the manicured hardwood of the mainstream hoops world.

“I’m not the average basketball player,” he divulges. “I didn’t watch a lot of NBA or college basketball [growing up]. I watched a lot of streetball videos and AND1 mixtapes and took a lot of stuff from those guys.”

Scott adds: “Even though they were making fancy passes, they also knew how to read situations.”

But just as important as his reads on the court has been his wisdom off of it. In a recent press conference, Willard spotlighted Scott’s mentorship of his teammates, wherein the senior has helped them understand the “physicality” and “competitiveness” of Big Ten play. For Scott, the feelings with his new coach are mutual.

“Coach has complete trust in us,” Scott declares. “When a coach tells you not to worry about the result of the shots you take — ‘just take good shots’ — that instills that he has complete faith in us. It gives us that extra connection with him.”

That harmony has helped Maryland get out to a scorching start this season. And at the center of the inferno stands Donta Scott, the consummate senior leader pushing the Terps past purgatory and ever closer to paradise.

A condensed version of this piece originally ran in the Dec. 5 edition of The Field of 68 Daily. Image courtesy of Maryland Athletics.