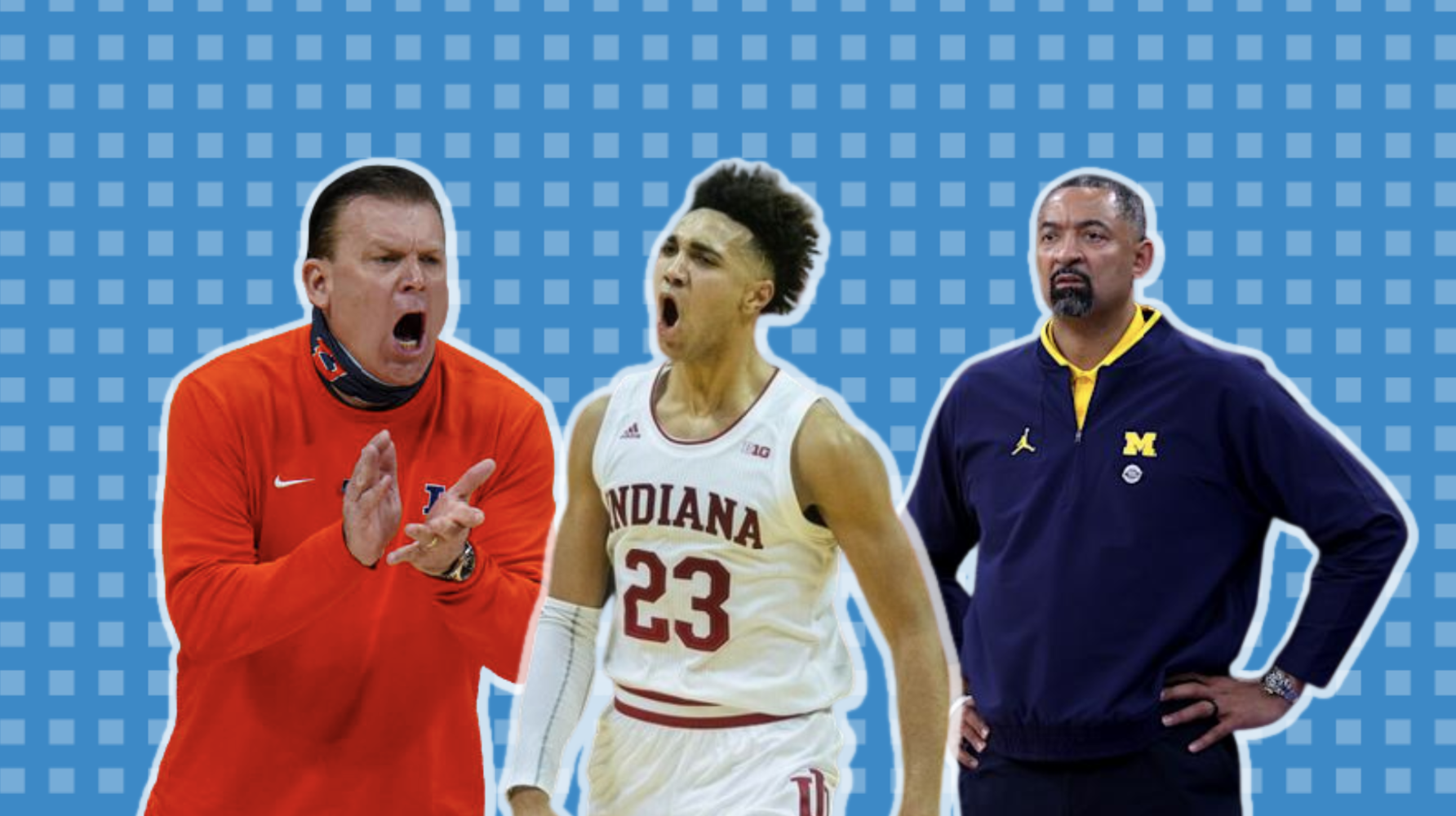 With looming questions amid a frantic offseason, the Big Ten offers more parity than in recent memory. Who will emerge as the ’22-23 title threat once the dust settles?

The Big Ten has consistently ranked among the nation’s best, but this season, a wave of transition threatens its prestige. Look no further than the number of star players who left for the professional ranks — All-Americans Kofi Cockburn, Johnny Davis, Keegan Murray, Jaden Ivey and EJ Liddell all moved on. And that’s not even mentioning other studs like Trent Frazier, Trevion Williams, Ron Harper Jr., and Malaki Branham, who also departed.

But even more alarming, the majority of schools didn’t replenish their losses via the transfer portal or the recruiting trail.

Note Illinois, which landed the two most heralded transfers in Terrence Shannon and Matthew Mayer. However, both newcomers have averaged fewer than 12 points per game in their respective careers. Relatedly, Indiana welcomes in the conference’s lone five-star recruits in Jalen Hood-Schifino and Malik Reneau, but neither project as can’t-miss talents.

Consequently, for the first time in ages, no team in the league will guarantee a spot in the top 10 of the preseason polls. With a down year looming, some folks in college basketball media have dubbed the conference the “Little Ten.”

Nevertheless, perhaps a few teams can take advantage of the wide-open landscape. What the Big Ten may lack in high-end teams, it will make up for in parity, and hopefully, entertainment. Here’s an early preview:

14. Northwestern: Things don’t look good for Chris Collins and the Wildcats. Northwestern loses star big man Pete Nance and brings in no suitable replacement. Compounding matters, it will again rely way too much on a trio of inefficient guards in Boo Buie, Chase Audiege and Ty Berry.
13. Nebraska: The Huskers have won a combined 24 games in three seasons under Fred Hoiberg. I wouldn’t expect that to change, even with some intriguing transfers like Emmanuel Bandoumel (SMU), Juwan Gary (Alabama) and Sam Griesel (North Dakota State) entering the fold. Nebraska still likely struggles on both ends of the floor.
12. Maryland: So Maryland fired a coach that made one Sweet 16 for . . . a coach who has yet to make the Sweet 16! The Terps hope to rebound from last season’s tailspin, but their present roster doesn’t evoke much optimism. A new backcourt of Jahmir Young (Charlotte) and Donald Carey (Georgetown) replaces the unpredictable Fatts Russell–Eric Ayala tandem. However, it’s no lock that either will translate to winning players in the Big Ten, despite their high scoring at previous stops.
11. Penn State: The Nittany Lions appear poised for improvement under promising second-year coach Micah Shrewsberry. On the defensive end, Penn State plays an intimidating style, making great use of its size — Jalen Pickett, Myles Dread and Seth Lundy all boast impressive strength and length. Yet the hole at the center position puts a hindrance on any tournament hopes.
10. Rutgers: The good news? Rutgers brings back fantastic big man Eugene Omoruyi, hyper-versatile guard/headband king Paul Mulcahy, and elite defender Caleb McConnell. The bad news? That’s pretty much it. Sure, the defense will remain steady, but without Ron Harper Jr., the volatile offense could dip below 100th nationally.
9. Minnesota: Last season, Ben Johnson demonstrated his coaching chops by forging a group of mid-major players into a competitive unit. This year, his Golden Gophers can take the next step. Incumbent forward Jamison Battle and North Carolina transfer Dawson Garcia will both rank atop the league in usage rate, while Morehead State transfer Ta’lon Cooper should excel as a table-setter.
8. Wisconsin: After five unforgettable seasons, the Brad Davison Era is officially over. Don’t cry because it’s over, Badger fans, smile because it happened. More pressing, though, is the cavernous void on the perimeter left by Johnny Davis. Can sophomore Chucky Hepburn make a similar jump heading into his sophomore season? Greg Gard needs him to do so, as Wisconsin has just one proven scorer in Tyler Wahl.
7. Ohio State: The last three years, the Buckeyes have been an excellent 3-point shooting team. But oddly enough, that might be their biggest weakness heading into this season. Justice Sueing and Eugene Brown are sub-32 percent shooters, while Zed Key has never attempted a 3 in his career. The fate of the offense may rest upon West Virginia transfer — and long-range assassin — Sean McNeill.
6. Purdue: In the spirit of the legendary rapper Ice Cube, Matt Painter should declare this roster “straight outta point guards.” But really, after losing Jaden Ivey, Eric Hunter, Isaiah Thompson and Sasha Stefanovic, any kind of guard would do. On the bright side, the Boilermakers will deploy 7-footer Zach Edey, a legitimate Big Ten Player of the Year contender. But the development of freshmen floor generals Fletcher Loyer and Braden Smith will determine their postseason fate.
5. Michigan State: If Spartan fans can hope in anything, it’s their team’s deep backcourt. In Tyson Walker, AJ Hoggard and Jaden Akins, Tom Izzo has three options who could burgeon into the primary offensive threat. And the ol’ coach needs one to do so. Somewhat surprisingly, the Spartans’ frontcourt options are as sparse as the toilet paper aisle in March 2020. Top-60 freshman big man Jaxon Kohler will play as many minutes as he can handle.
4. Michigan: Juwan Howard enters Year 4 with more uncertainty around his team than ever before. How will Princeton transfer Jaelin Llewellyn perform against the upgraded competition? Can Howard’s son Jett, a top-50 freshman wing, make a two-way impact? Will the defense bounce back after ranking 11th in the conference in adjusted defensive efficiency a season ago? Still, even amid these questions, the solid rock of Hunter Dickinson keeps the Wolverines in the top tier of the Big Ten.
3. Iowa: After three straight seasons of top-5 offenses (per KenPom) Iowa again projects as an elite scoring team. Junior Kris Murray will follow in his brother’s footsteps and become the focal point of the unit. Last year, the lefty showcased a gorgeous 3-point stroke and flashed a lob threat in transition. In addition to Murray, junior guard Tony Perkins and sophomore wing Payton Santford could also break out.
2. Illinois: With the departure of Kofi Cockburn, Brad Underwood will lean almost entirely on his perimeter corps. Former top-100 wings Luke Goode and RJ Melendez, along with stretch-4 Coleman Hawkins, comprise a solid group of returners. Additionally, transfer portal gems Terrence Shannon (Texas Tech) and Matthew Mayer (Baylor) provide switchable defense and microwave scoring. In the backcourt, the Illini have a talented Trent Frazier replacement in Skyy Clark. But it remains to be seen if the freshman can regain his form after an ACL tear derailed his high school career.
1. Indiana: On its own, the return of All-American big man Trayce Jackson-Davis would land the Hoosiers in the top half of the standings. But Indiana elevates to the top spot because Mike Woodson has surrounded the superstar with his best supporting cast yet. The coach retains 78 percent of last season’s minutes (per Torvik) and adds Montverde teammates Jalen Hood-Schifino and Malik Reneau. But even with the infusion of star power, one question hangs over IU: Can anyone emerge as a reliable shooter next to Xavier Johnson?

Purdue: Its lack of guards notwithstanding, Purdue still has the coaching to finish toward the top of the standings. After all, Matt Painter has maintained an enviable level of consistency for over half a decade (the Boilermakers have won 25 or more games in five of the last seven seasons). Regarding the roster, Brandon Newman and Mason Gillis could take the leap many predicted last season. Any positive developments would relieve some pressure off of the inexperienced backcourt. And of course, Edey’s presence in the middle will supply a safety blanket for the offense.

Kris Murray, Iowa: Sometimes, the obvious pick is the right one. Comparisons will undoubtedly arise between Murray and his twin, who blossomed into one of the best players in the country last year. But notably, Kris is further along than Keegan was before his breakout season. As a sophomore, the 6-8 junior ranked second on the Hawkeyes in both effective field goal and 3-point percentage, while maintaining the second highest usage rate. Now, I’m not saying he will average over 23 points and 8 boards en route to a top-5 draft selection. But a First Team All-Big Ten campaign is well within his range of outcomes.

Jaxon Kohler, Michigan State: Like a bushwhacker in the Amazon, Julius Marble‘s transfer and Marcus Bingham‘s draft decision cleared Kohler’s path to a starting spot. The 6-10 freshman teems with offensive upside, boasting top-notch footwork, a variety of post moves, and an expanding face-up game. Unfortunately, Kohler’s game has one drawback: defense. While he boasts college-ready size, he will likely need time to adjust on that end of the floor. But if Izzo lets him play through mistakes early, it may pay dividends in March. (Also, his sand game is ELITE).

Terrence Shannon, Illinois: In three seasons at Texas Tech, Shannon never played more than 27 minutes per game. That almost certainly changes this year, as Brad Underwood turns to him as option No. 1. The 6-6 lefty has exhibited enticing athleticism and craftiness off the bounce throughout his career; look for his new coach to fully unleash those attributes. If Shannon can cut back on some of his hero-ball tendencies, he could establish himself as the best wing in the conference.

Hunter Dickinson, Michigan: Could Dickinson improve on his 18.6 point, 8.6 rebound, and 2.3 assist per-game averages from last season? He should be able to at least get close. The 7-1 junior has proven to be impossible to guard, as he navigates through double teams and feasts in both the low and high post. If Dickinson tallies similar numbers — and if the Wolverines avoid the debilitating inconsistencies that plagued them in 2022 — he will come home with the hardware.