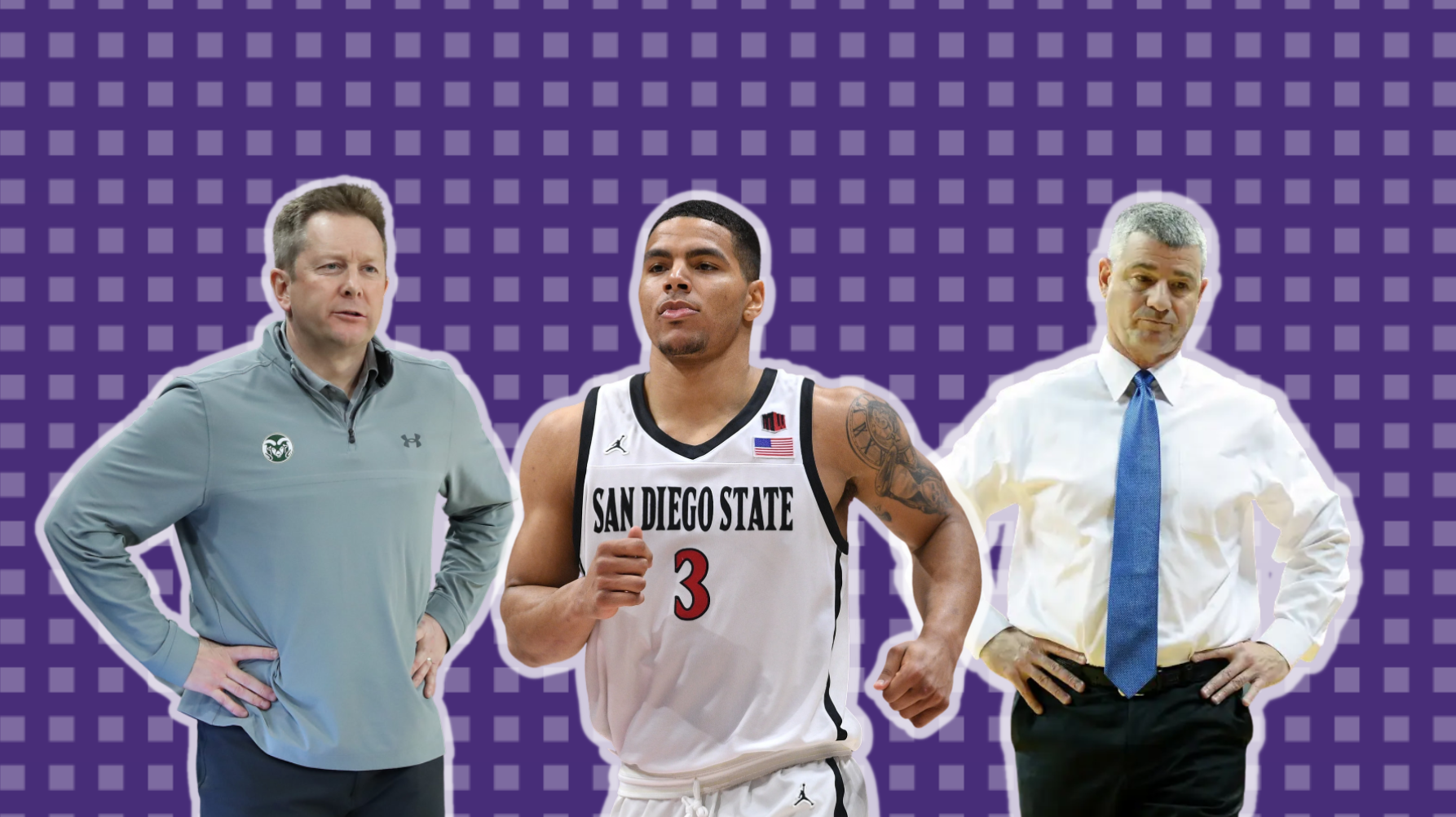 Can the Mountain West finally put an end to its March demise? San Diego State — and a handful of potential contenders — look to turn regular-season dominance into postseason success.

Can 2023 finally be the year that the Mountain West turns it around in March? San Diego State should be the consensus favorite and a potential preseason Top 25 team while the likes of defending MWC champ Boise State and 2022 at-larges Wyoming and Colorado State round out the league’s top tier. Let’s check out how one of college basketball’s most exciting conferences looks to shake out this coming season.

11. San Jose State: SJSU’s season went sideways after a 7-5 start, falling in 18 of its final 19 games. Losing quality rim-protector Ibrahima Diallo for most of the year hurt but San Jose State’s reluctance to attack offensively — 12th nationally in points off 3-pointers; 354th in points off free throws — prevented better offensive flow. Five Spartans who started at least 10 games last season return, three of whom shot better than 37 percent from 3-point range. Omari Moore is the star of the group but he needs help.
10. Air Force: Like SJSU, Air Force raced out to a 7-1 start before the wheels fell off in an 11-win campaign. In two years under Joe Scott, the Falcons have been unable to take care of the basketball or maximize second-chance opportunities. Losing AJ Walker — the team’s leading scorer the past two seasons — puts further pressure on an already offensively challenged roster.
9. Nevada: Steve Alford lost three double-digit-scoring starters in the portal (Grant Sherfield, Desmond Cambridge, Warren Washington) as Nevada projects to be one of the league’s weaker defensive groups. Identifying a go-to scorer and running opponents off the perimeter — 333rd, 325th and 336th nationally in opponent 3-point attempt rate under Alford — will go a long way in bouncing back. Transfers Jarod Lucas (Oregon State) and Hunter McIntosh (Elon) will help provide perimeter shooting.
8. Utah State: After top-3 finishes every year under Craig Smith, Utah State slipped to 7th last season with frontcourt duo Justin Bean and Brandon Horvath carrying Ryan Odom’s Year 1 workload. Both all-leaguers have moved on, leaving some question marks in the Aggie rotation. Junior guard Steven Ashworth seems primed for a breakout and St. Joe’s transfer Taylor Funk helps soften the frontcourt blow with 100 career starts to his name.
7. Fresno State: Orlando Robinson is gone after an accolade-filled career. Southern Miss transfer Isaih Moore is Robinson’s expected successor in the frontcourt after a productive season with the Golden Eagles, particularly on the offensive end. The Bulldogs have no shortage of versatile athletes in their rotation but can Fresno State win enough battles in the slow-paced, halfcourt attack without Robinson? Four returning upperclassmen starters will be tasked with bigger workloads.
6. UNLV: Kevin Kruger stepped in and led the Rebels to their best KenPom ranking since 2014 after an 18-win showing. The UNLV staff was as prolific as anyone this offseason, adding five transfers who combined to start 102 of a possible 139 games last season. While the Rebels project to be one of the MWC’s best defensive teams, identifying a primary bucket-getter in the post-Bryce Hamilton era will be pivotal. Per Hoop-Math, Hamilton was responsible for over half (52.0 percent) of UNLV’s unassisted 2-point jumpers and 3-pointers, a number to keep an eye on considering the defense-first transfer class.
5. New Mexico: New Mexico returns a pair of MWC third-teamers in Jaelen House and Jamal Mashburn, the first time UNM has brought back its top two per-game scorers since 2016-17. Based on minutes played, the Lobos are the only MWC team that returns each of its top five players from last season. With two-year Wichita State starter Morris Udeze helping anchor the defensive frontcourt, Richard Pitino enters Year 2 with plenty of upside to crack the conference’s top half.
4. Boise State: The defending Mountain West champs are probably in better shape than an on-paper glance would suggest but questions linger. Marcus Shaver sticking around for another year was huge and Tyson Degenhart has MWC POY potential if he continues to build off a stellar rookie season. From there, quite a bit is up in the air. Chibuzo Agbo, a former top-100 recruit and Texas Tech transfer, could stabilize in the MWC after playing sparingly with the Red Raiders. Sadraque Nganga is the highest-rated signee in program history but the forward’s injury history caused blue bloods to shy away from the once-top-15 prospect. Three-star shooting guard RJ Keene could also be a factor after redshirting.
3. Wyoming: The Cowboys bring back the league’s best duo in Hunter Maldonado and Graham Ike after the team’s first tournament bid since 2015. Drake Jeffries is the only rotational departure but it could be significant given Wyoming’s post-up-heavy offense. The 6-5 guard pocketed over a third of the team’s 3-pointers last season at a 40.9 percent clip while the rest of the team shot 31.6 percent. Jeff Linder hit the portal hard and landed Pac-12 transfers Ethan Anderson (USC), Max Agbonkpolo (USC) and Jake Kyman (UCLA) to anchor the rotation. However, they were a combined 52-of-175 (29.7 percent) from deep last season. Offensive spacing will be something to monitor.
2. Colorado State: David Roddy‘s departure is massive as CSU says goodbye to one of the most productive players in the sport. The cupboard is far from empty for Niko Medved’s staff, though. Senior Isaiah Stevens is the league’s top floor leader and John Tonje should be a key contributor after finishing in double figures 12 times last season. Transfers Josiah Strong (11.5 ppg at Illinois State) and D-II’s No. 10 overall scorer Patrick Cartier provide scoring pop.
1. San Diego State: SDSU has the makings of a top-15 team if everything clicks thanks to the return of Matt Bradley and Nathan Mensah. The Aztecs were No. 2 nationally in defensive efficiency last season and welcome in all-league defenders in transfers Darrion Trammell (Seattle U) and Micah Parrish (Oakland) who will help on both ends. Forward Jaedon LeDee, who sat out last season after transferring from TCU, has received a ton of praise. Improved shooting from the returning core will be the difference.

New Mexico: Continuity is a rarity in this era of college basketball, making New Mexico — a program with no shortage of recent pro/transfer departures — a trendy sleeper choice with its returning nucleus. Richard Pitino transformed the UNM offense in Year 1, jumping over 200 spots nationally in offensive efficiency. The infusion of Jaelen House and Jamal Mashburn — combining for 35.1 points per game and a 1.20 assist/turnover ratio — brought playmaking and shot creation to the up-tempo attack. If Morris Udeze (Wichita State) and Josiah Allick (Kansas City) can help shore up the physicality of the frontcourt, UNM has the makings of a dangerous out come March.

Steven Ashworth, Utah State: The 6-1 Aggie guard is already one of the more efficient offensive players in the conference. He closed his sophomore season with a 20-point outing against Oregon, pocketing six 3-pointers and dishing out five assists. Ashworth is the team’s leading returning scorer and his ability to hit from deep (62 made 3-pointers; .392 3P%) will keep defenses honest. He’s probably best suited to be prominently displayed off-ball next to Rylan Jones as a consistent perimeter threat who also displays lead-guard abilities.

Joseph Hunter, Fresno State: The 6-5 combo guard is a Fresno native who chose the Bulldogs over a bevy of high-major offers, including Illinois, Arkansas, USC and others. He’s a top-100 recruit, bringing versatility and size to the backcourt. Expect Hunter to be an immediate impact in the Mountain West as a potential sixth man.

Darrion Trammell, San Diego State: A West Coast transfer point guard who plays with quickness, defends, and can score at all three levels? Sounds awfully familiar for the SDSU program (looking at you, Malachi Flynn, Devin Watson and Xavier Thames). Trammell is a shifty guard who makes the right reads in pick-and-roll situations by pulling up, driving or finding the open man.

Hunter Maldonado, Wyoming: There is no shortage of Player of the Year candidates heading into the 2022-23 season. SDSU’s Matt Bradley is a smart choice though his usage (fortunately) probably won’t be as high this season with an improved supporting cast. CSU’s Isaiah Stevens will take on a bigger role without sidekick David Roddy, Boise State’s Tyson Degenhart should have a huge season, and then there’s Wyoming’s Hunter Maldonado/Graham Ike duo. We’re leaning towards Maldonado, who offers the most versatility and creation abilities in the conference. The 6-7 floor leader was the only player in college hoops last season who tallied 18 points, 6 assists and 5 rebounds per game.