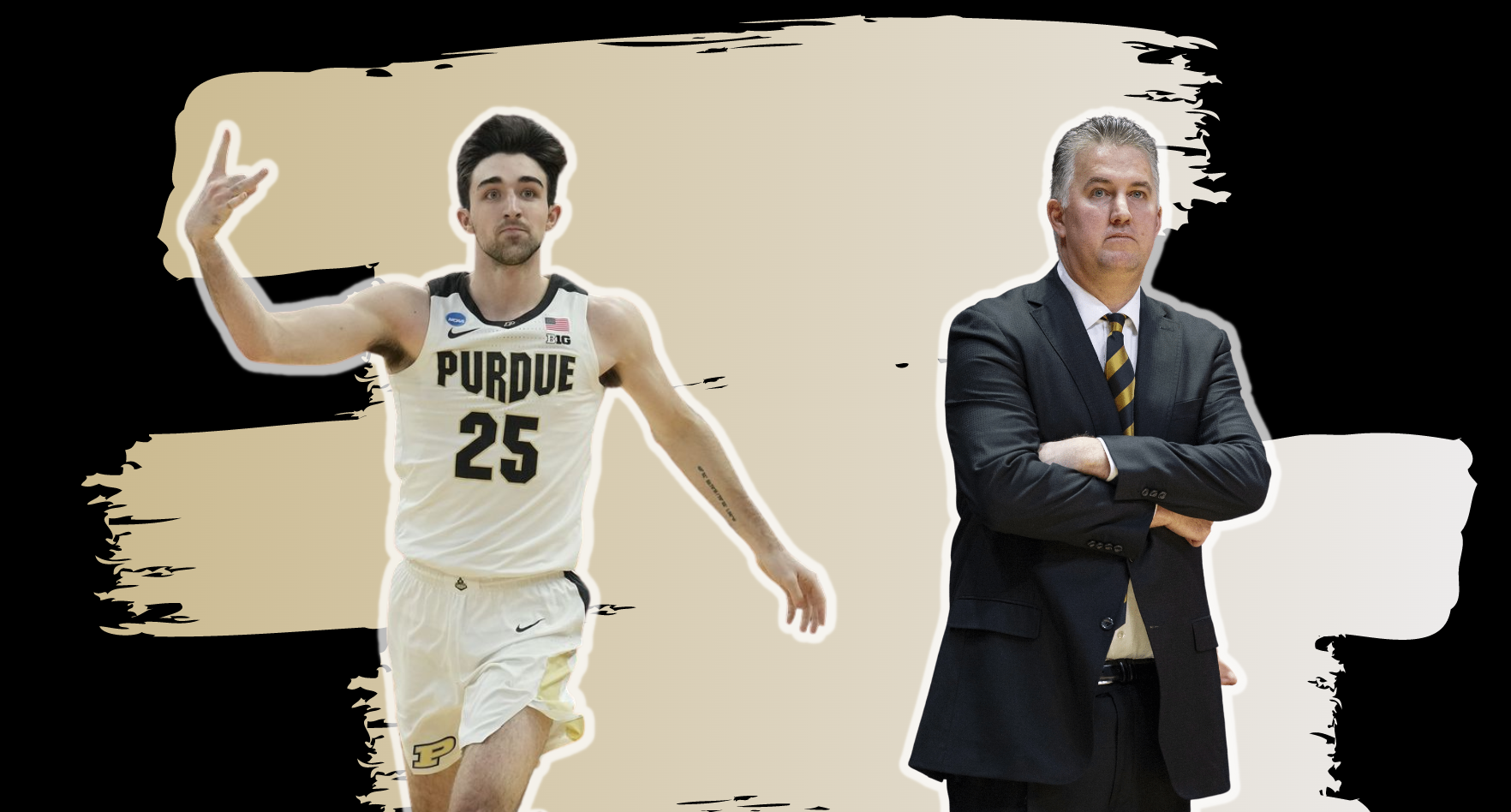 Purdue basketball has earned a top 5 seed in each of the last six NCAA Tournaments. To keep that streak alive in 2022-23, the Boilermakers will need to figure out their point guard position.

Purdue basketball has epitomized consistency in recent years. The Boilermakers have made seven consecutive NCAA Tournament appearances – six times as a top 5 seed – and reached the Sweet 16 in four of their last five tries. The fanbase can always count on Purdue to contend in the Big Ten behind a star big man each season. Purdue’s starting center has been named All-Big Ten (including Honorable Mention) for nine straight years.

Heading into 2022-23, Purdue once again features a tremendous post player. Second Team All-Big Ten selection Zach Edey is back in West Lafayette as one of the nation’s top centers. Frontcourt running mates Mason Gillis and Caleb Furst also return as potential starters. While there should be confidence in Purdue’s frontcourt for next season, the backcourt is full of uncertainty.

Most notably, Jaden Ivey departed for the NBA Draft this offseason. The sophomore led Purdue in scoring last season and will be difficult to replace. Sharpshooting senior Sasha Stefanovic exhausted his eligibility, meaning Purdue is down its top two scoring guards from last season. To fill the backcourt voids, many expected Eric Hunter Jr. and Isaiah Thompson to step into bigger roles. Instead, both entered the transfer portal this offseason, leaving the Boilermakers without any proven options at point guard.

Head coach Matt Painter recognized his rotational hole but has been unable to fill it via the transfer market. While Purdue is currently among the options for Utah transfer David Jenkins Jr., the Boilermakers missed on primary transfer targets Nijel Pack (Miami-FL) and Tyrese Hunter (Texas) earlier this offseason, among others. In the aftermath, Purdue now has to look inward to fix its hole at point guard, given Jenkins is largely an off-ball guard option if he were to become a Boilermaker.

Err on the side of Ethan Morton’s experience?

Purdue features a trio of potential options to start at point guard this season, two of whom will be true freshmen. Coach Painter is not afraid of thrusting newcomers into the spotlight, but a freshman has only led Purdue in assists in three seasons across his 17-year tenure. With that track record in mind, it is worth investigating the “veteran” of the point guard room in 2022-23: rising junior Ethan Morton.

Morton is a former four-star recruit who was heralded for his playmaking ability out of high school. 247Sports’ Jerry Meyer scouted him as “an exceptional passer who is comfortable with the basketball anywhere on the court” during a 2019 evaluation. Morton’s role has been limited at Purdue thus far but he exhibited a 2.94 assist-to-turnover ratio as a sophomore. His playmaking chops could be necessary given Purdue has ranked top 125 in assist rate in eight consecutive seasons.

Without a logjam in front of him, Morton will play a much bigger role for Purdue this season. He proved last year that he is capable of filling a secondary role with his playmaking and defense while also going 15-of-34 (44.1 percent) from three.

It is worth noting, however, that much of the playmaking in Purdue’s system comes from the wing. The Boilermakers have recently been led in assists by Sasha Stefanovic, Ryan Cline and Dakota Mathias – all of whom started alongside smaller guards like Jaden Ivey and Carsen Edwards. More of the same could be on the horizon with Morton creating from the wing.

If Coach Painter elects to go with a score-first lead guard, Fletcher Loyer could emerge as a full-time starter. Loyer is Purdue’s top-rated freshman, arriving as the No. 91 overall player in the 2022 recruiting class. He was named Indiana’s Gatorade Player of the Year this past season while putting up 26.9 points, 5.3 rebounds and 3.7 assists per game. Loyer is a tremendous scorer with a penchant for filling up the basket from beyond the arc. He won the National High School 3-point Championship earlier this spring.

Purdue’s system prioritizes floor-spacing around a central big man, ranking in the top 75 for 3-point efficiency in five of the last seven seasons. That scheme will again take center stage as Zach Edey reprises his role inside. With the Boilermakers losing over 70 percent of last season’s 3-point makes this offseason, it might be hard to keep an elite sniper like Loyer off the court. Whether those minutes will come as a primary initiator or as an off-ball spacer is yet to be determined.

Running Loyer at point guard would sacrifice some passing from the position but would add more scoring. It would also call for a playmaking-by-committee scheme where less of the creation falls on the point guard. Given Purdue’s tendency to post-up with wing entry passes anyways, this strategy could be effective while also maximizing spacing with Loyer on the floor.

While Morton and Loyer are options to fill this slot, neither is truly a point guard. If Coach Painter wants his offense run through a more traditional lead guard, then Braden Smith could be his guy. An unheralded recruit ranked No. 195 overall in the 2022 class, Smith has exceeded external expectations throughout his career. His high school journey culminated in a phenomenal senior campaign.

While a tad undersized at 6-0, he was named Indiana’s Mr. Basketball this past season after averaging 18.3 points, 6.0 rebounds and 6.0 assists per game to secure Westfield’s first sectional championship in 105 years. Smith finished his high school career as Westfield’s all-time leading scorer and distributor. He also shot 251-for-587 (42.8 percent) from three over his four years.

Now entering his freshman season at Purdue, he is perhaps the only true point guard on the roster. As a result, he will be thrust into big minutes either as an immediate starter or the floor general of the second unit. Given Smith’s combination of shooting and playmaking, he is the most straightforward solution to Purdue’s starting point guard slot.

Smith has extensive experience at the position and might prove more trustworthy running the offense in the preseason than traditional off-guards in Morton and Loyer. On the reverse side, though, he could struggle defensively as a true freshman without great positional size.

Regardless of who initiates the offense following opening tips, all three players will be critical in determining Purdue’s potential in 2022-23.

Assessing the importance of a backcourt solution

Purdue’s consistency as one of the Big Ten’s top teams is admirable. And despite suffering heavy losses this offseason, the Boilermakers should not be written off as a contender. The Big Ten appears likely to experience a down season by its elite standards, allowing Purdue to potentially remain in the conference title mix. The lack of a proven backcourt, though, is what raises questions.

Is Ethan Morton ready to take on a much bigger role either as a primary playmaker or a high-volume shooter? He only averaged 2.4 points and 1.4 assists in 14.8 minutes per game last season. Can incoming freshmen Fletcher Loyer and Braden Smith be reliable floor-spacers around Edey? Both of those answers need to be “yes” for Purdue to contend for the Big Ten title.

Shooting and playmaking have long been program staples for Purdue. Their six seasons finishing outside of the KenPom top 20 over the last 12 campaigns featured below-usual marks in either 3-point efficiency or assist rate — or both. As far as this coming season is concerned, both areas are lacking on paper. Purdue brings back only 28.3 percent of their 3-point makes and 26.3 percent of their assists from last year. This makes the potential contributions from an unproven backcourt even more important.

Morton, Loyer and Smith have yet to start a game at the D-1 level. Yet, at least two will likely have to start this season and all three will be relied upon to provide spacing and creation. If they pass those tests, Purdue can once again contend in the Big Ten.