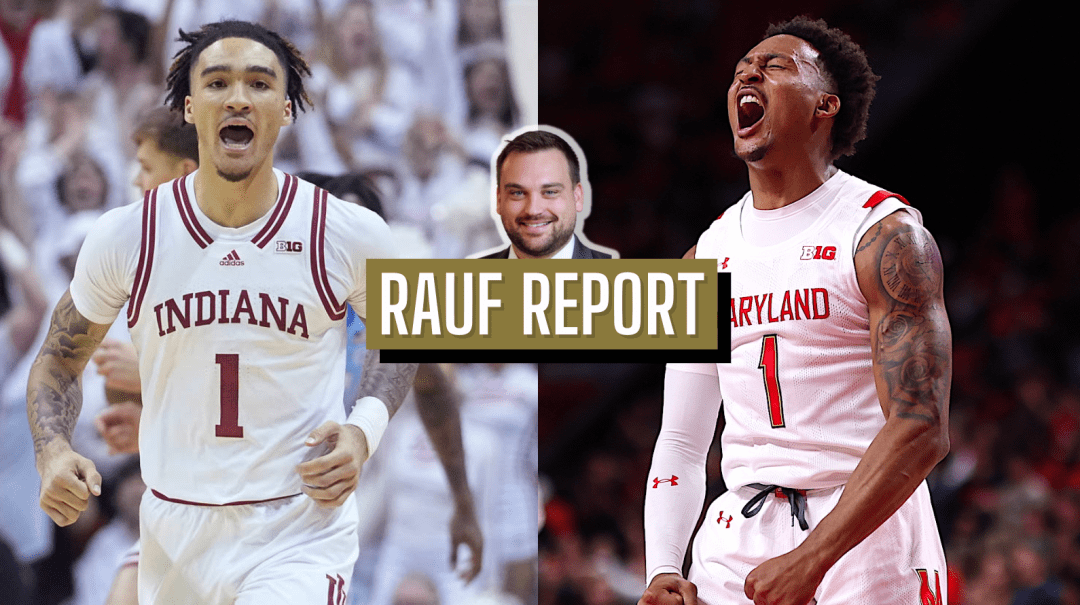 This week’s Rauf Report looks at Indiana, UNC, Creighton and more, while discussing the biggest takeaways from the college hoops weekend.

Starting conference play this early in the college basketball season typically leads to some topsy-turvy results as teams still try to find themselves, but that — combined with the rigors of playing true road games — can lead to some stunning upsets.

That was certainly the case this weekend.

Indiana was blown out by Rutgers at Jersey Mike’s Arena (aka The RAC) while Virginia Tech handed North Carolina its fourth-straight loss, making the Tar Heels the first preseason No. 1 team to ever endure a four-game losing streak. Nebraska went on the road and shocked Creighton, handing the Bluejays their third-straight defeat, while Northwestern stunned Michigan State in East Lansing, continuing the Sparty slide we detailed last week.

Some of these results are indicative of pressing issues for the higher-ranked team — some of which we’ve noted in past columns — but ultimately, it’s important to take these early December results with a grain of salt. When conference play resumes at the end of the month, many of these issues will likely be ironed out.

There is more practice time in December than there typically is in November, which is filled with MTE travel. There are typically games against lesser competition during exam weeks, which also help everyone get their proverbial feet back underneath them.

The bottom line is: we often look back at these early conference games and are puzzled by the result — certainly more often than we do in February. But that’s the nature of the beast these days with 20-game conference schedules.

What lasting takeaways came out of this weekend’s games? Let’s dive in.

Let’s start with Indiana’s loss to Rutgers because there was more going on in that game other than the Scarlet Knights simply imposing their will. Yes, they have beaten the Hoosiers six times in a row, but it was very clear in this game how much Indiana missed Jalen Hood-Schifino. The star freshman did not play due to a back injury and his offensive contributions were definitely missed.

Indiana prefers to work inside-out with Trayce Jackson-Davis as their primary scorer, but there has to be some sort of perimeter threat to take the pressure off him and Race Thompson inside. Rutgers packed in its defense to limit Indiana’s frontcourt and it worked — TJD was limited to 13 points, and Thompson put up a goose egg.

The flipside, though, was that it left holes on the perimeter. Miller Kopp had 21 points, including five made 3-pointers, excelling off kick-outs from the post. The rest of IU’s perimeter players combined for 10 points.

Head coach Mike Woodson said postgame that the Hoosiers have simply “got to make shots from the perimeter,” while Jackson-Davis said the “offense just wasn’t clicking.” The missing piece to the offense: Hood-Schifino, the Hoosier who can consistently create his own shot and make contested jumpers.

That creation and shot-making was on full display for the freshman in the win over North Carolina. He scored 12 of his 14 points in the first 11:10 of game time against the Tar Heels, most of which came off the bounce.

Hood-Schifino was a threat every single time he touched the ball, and it make UNC change up its defensive gameplan. In turn, that opened up more room for Jackson-Davis inside and took pressure off Xavier Johnson.

That threat did not exist for Indiana without its first-year star. Rutgers was able to pack it in against Jackson-Davis, and Johnson couldn’t relieve the pressure (2-of-11 shooting for eight points).

This Indiana team has the potential to be really good this season — but to reach that potential, Hood-Schifino will have to play a huge part.

I promise I’m not going to talk about all the things that are wrong with UNC in each column! At least, I’ll try not to do that. Unfortunately, I keep trying to figure out exactly why things have gone so wrong for a team I was so high on at the start of the year.

Last week, we dove into North Carolina’s lack of offensive movement, both on and off the ball. That stagnancy remains the main concern, and it’s a huge reason why the Tar Heels have such low assist and efficiency numbers. As of Monday morning, UNC ranked 349th out of 363 teams with assists on jut 40.1 percent of its buckets.

But there also aren’t any perimeter threats opponents really have to worry about on every possession.

Caleb Love and RJ Davis are obviously capable of hitting threes at a high clip, but they aren’t doing it right now. They’re both shooting below 30 percent from deep on the season. Pete Nance is shooting roughly 35 percent but has only made multiple threes in two contests. On the whole, the team is shooting just 29.2 percent from deep — third-worst in the ACC and just 306th nationally.

That Brady Manek-type sniper is nowhere to be found. Without a deadly 3-point shooting threat, opponents can pack the paint defensively and force the Tar Heels into poor perimeter shots, a trap which UNC has fallen into far too often (shot selection is another issue).

It doesn’t help that there are no other scoring threats period. No bench player averages over 5.0 points per game and only one averages more than 3.0. That’s a problem! And one that’s not easily fixed, either. Scoring depth might be a major hole in UNC’s roster that limits them for the rest of the season.

Creighton’s interior play is a concern

No doubt about it, Creighton’s Ryan Kalkbrenner is one of the best big men in the entire country. On the other hand, the Bluejays don’t have many other true bigs on their roster. While it is an inevitable byproduct of their free-flowing, 3-point-centric style, this lack of size is becoming a problem.

There are a number of underlying issues that can begin to fester with a lack of interior dominance. Almost all of them were on display in Sunday’s loss to Nebraska.

Offensively, Creighton is efficient inside, but the Bluejays doesn’t get there often. They are shooting over 70 percent at the rim, which is 15th nationally per Hoop-Math, yet are 174th in field goal attempts at the rim. Meanwhile, the team has allowed opponents to shoot 61.7 percent at the rim, an above-average mark (84th).

Against the Huskers, Creighton shot just 25 of its 65 field goal attempts from inside the arc, hitting 40 percent. Nebraska, meanwhile, shot 47 of its 59 attempts inside and converted them at a 53.2 percent clip.

Nebraska also won the rebounding battle and, while the Bluejays are generally fine in that area, they aren’t good at collecting their misses (238th in offensive rebounding rate). Poor offensive rebounding is less of an issue when you are shooting well; unfortunately, Greg McDermott’s squad has been in a slump for the past two games.

To be clear, I do not think the sky is falling in Omaha. Creighton is a good basketball team that lost by two to a good Arizona team and lost by five to a top-five Texas team when it started 1-of-22 from 3-point range. The Nebraska loss is concerning, but the other losses are extremely reasonable, and the Bluejays could’ve won both!

At the same time, part of the season they didn’t win those games was because of their relative weakness on the interior. Nebraska took full advantage of it — look for future opponents to try to do the same.

Jahmir Young is a star FOR MARYLAND

Let’s get to some positives, shall we?

No player impressed me more this weekend than Maryland’s Jahmir Young. The Charlotte transfer was excellent during his three seasons with the 49ers, but it’s clear he has taken his game to another level.

Against an elite Illinois defense, Young remained in control and routinely picked apart whatever the Illini gave him. His poise was obvious and infectious. Young was patient when coming off pick-and-rolls, probing the defense to find the weak spot. He exploded when there was an open lane to the basket, made five 3-pointers (both off the bounce and in spot-up situations) and utilized a mid-range floater when the situation called for it.

The DeMatha product also hit the game-clinching 3-pointer in the closing moments.

Donta Scott has been excellent for Maryland as well, and both Hakim Hart and Julian Reese have stepped up in Kevin Willard’s first season. But Friday night’s win showed us that Young is the engine that makes the Terps go — and he’s more than ready to drive.

These Penguins can SCORE

There typically isn’t a ton of Horizon League talk in these Rauf Report columns, but Youngstown State has become a ton of fun to watch this season.

The Penguins are currently 53rd nationally in adjusted offensive efficiency, per Torvik, giving them a top-10 offense in the mid-major ranks. That offense allowed them to nearly upset Notre Dame during the season’s first weekend and landed them a big conference victory over Wright State on Sunday.

Of course, it helps when you have someone driving the bus. Youngstown has a number of different players who can do that — Malek Green, Dwayne Cohill and Adrian Nelson all average over 14 points per game — but it was Cohill that put on a historic performance against the Raiders.

Cohill is the first player in men’s Division 1 history to post the stat line noted in the tweet above, per Jared Berson. His true shooting percentage was over 100 percent on the game! (The fact that Cohill has a brand and apparel line called Problem Child is even more fun.)

Now, the Penguins do struggle defensively (271st, per Torvik), which cost them in a loss to Navy. But if you’re looking for a fun mid-major team to follow throughout the season, pick the team that’s averaging 82.5 points per game and plays an enjoyable style.