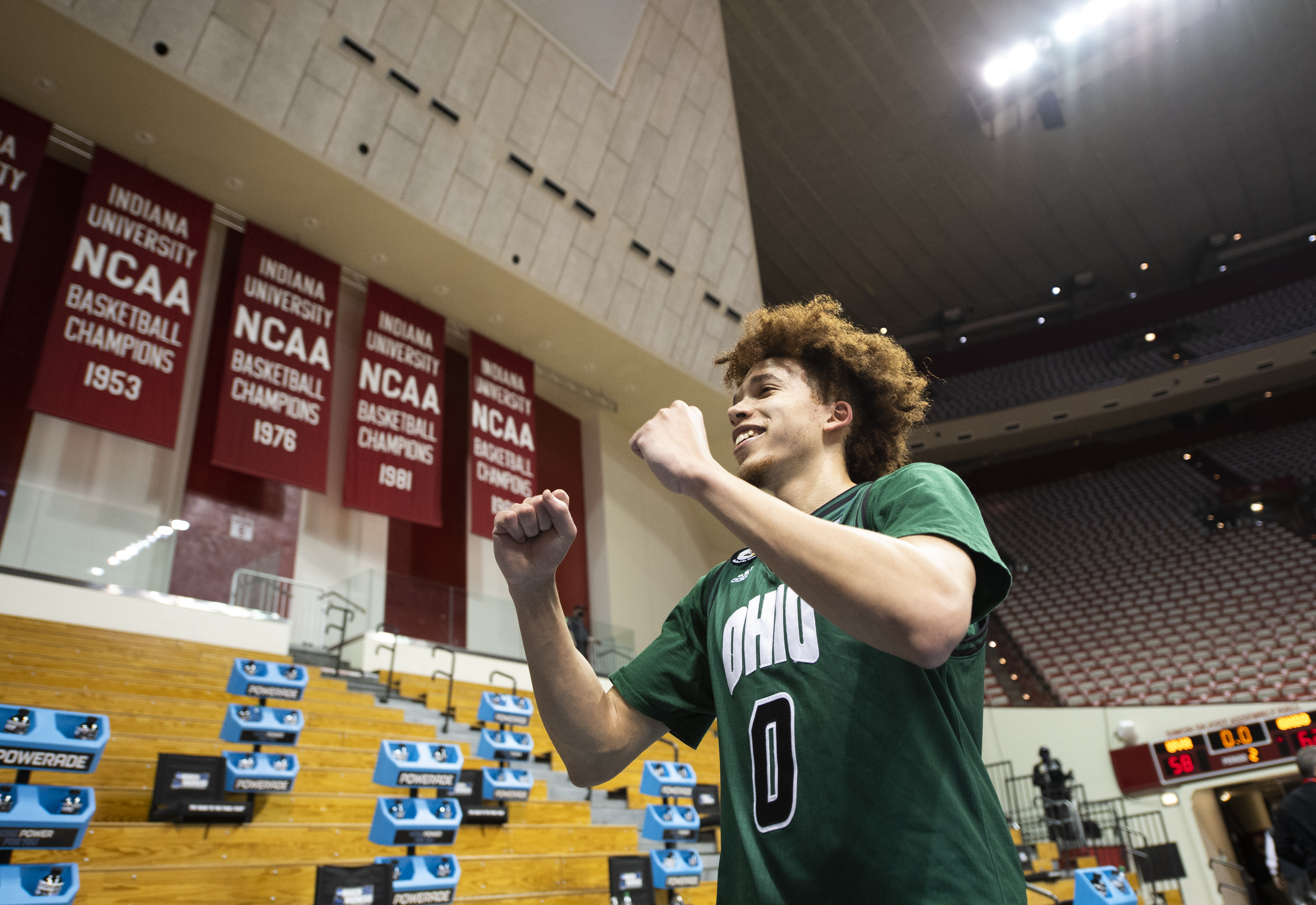 March Madness 2021: Get to know the biggest underdogs crashing the Big Dance

After missing out on last year’s NCAA Tournament, the men’s event has wasted no time in offering plenty of March Madness.

Oh, it’s so good to have this back in our lives. For everyone who missed out on the Madness for the grueling seven-hundred-and-ten-day span between NCAA Tournament games, the first two days of the 2021 iteration were likely an absolute treat.

Unless your team is one of the highly rated national title contenders that got bounced in Round 1.

Even if your school did draw the short end of the stick, you have to admit — this was exactly what we wanted out of the NCAA Tournament, and more. The miraculous upsets, the big comebacks, the unsung heroes finally getting their deserved limelight. Everything about the 2021 tournament has lived up to the billing to this point, and it’s hard to imagine the madness will stop here.

So now that your bracket is busted — and don’t lie, because ESPN has confirmed that there are no perfect brackets remaining after the First Round — it would behoove you to get to know some of the more lowly seeded teams that are still dancing. Usually, you might only need to know one of these hopeful Cinderellas, but with a quarter of top-four seeds falling in the First Round, suddenly the homework is piling up.

But don’t worry, we’ve got you covered. Here’s a quick primer on the five teams seeded No. 13 or lower that are still alive. (Before you go looking: No, they don’t all hail from separate regions, so the dream of an all-Cinderella Final Four is still alive … but only if you extend the definition to include No. 12 seed Oregon State and/or No. 10 seed Rutgers in the South Region.)

How they got here: The Golden Eagles have been flying under the national radar for some time, but even within their own league, they were something of an afterthought behind Summit League stalwarts South Dakota State and North Dakota State. (Think Morehead vis-a-vis Belmont/Murray State, if you’re more familiar with the OVC.) The Eagles were the No. 4 seed in their conference tournament, but thanks to the nation’s leading scorer Max Abmas (pronounced ACE-muss, in case you hadn’t heard) and gifted big man Kevin Obanor, ORU swept through the Summit League Tournament and earned the automatic bid.

What just happened: Despite being slotted into one of the harder spots in the bracket, generally speaking, Oral Roberts actually matched up decently well with South region No. 2 seed Ohio State. So well, in fact, that our fearless leader picked ORU straight-up before the game. Those hopes were rewarded when Abmas and Obanor combined for 59 points in the Golden Eagles’ 75-72 overtime win on Friday. It was the first true stroke of March Madness for a nation gasping for it.

What happens next: Oral Roberts looks to keep the upset train rolling on Saturday when they take on No. 7 Florida, a team coming off a confidence-building win of its own in the First Round. The Gators are particularly tough on the perimeter, holding opponents to just over 30 percent shooting from beyond the arc. If Abmas is contained from deep, ORU will need Obanor to have another big game in the paint if they’re going to become just the second No. 15 seed to reach the Sweet Sixteen.

How they got here: Joe Golding’s team gave us clues about how good his team was from the very opening tip of the 2020-21 season, as his ACU team beat up on a capable East Tennessee State squad. When they beat Austin Peay days later, it was evident that there was something happening in Abilene, and the Wildcats’ 13-2 run through Southland Conference play backed up all of that early evidence. Despite being the No. 2 seed in the league tournament, Abilene Christian made easy work of No. 1 seed Nicholls State, cruising to a 79-45 win and a bid as the West region No. 14.

What just happened: In what became the nightcap for Day Two of the tournament following the cancellation of the Oregon-VCU contest, Joe Golding and the purple mountain majesty of Abilene’s defense provided one last dose of magic for a country reeling from some hard news. Despite trailing by five points at halftime, the Wildcats used a tenacious effort on D — and perhaps a very fortunate foul call — to snatch a thrilling 53-52 win over No. 3 Texas. So, in addition to sending a potential Final Four team to an early exit, ACU gets to experience the added benefit of bragging rights as they boast to their Texan neighbors across the state.

What happens next: For their troubles, Abilene Christian earns an impossible matchup against *checks notes* No. 11 seed UCLA?! Though you can’t completely ignore what Mick Cronin’s Bruins have done in their own right — beating Michigan State and BYU in their first two games — it’s also hard to complain about the draw if you’re ACU. The Wildcats’ defense will be put to the test against a balanced offensive attack from UCLA led by Johnny Juzang, who already has 50 points in two NCAA Tournament games. ACU seven-footer Kolton Kohl will need to lock down the paint.

How they got here: All the way back in November, these Bobcats grabbed America’s attention for a few hours when they took national title contender Illinois down to the wire. In that game, Ohio point guard Jason Preston was the unquestioned MVP, outplaying potential Player of the Year Ayo Dosunmu and introducing the country to his unique and moving story of perseverance and toughness. But the team fell off the radar a bit during MAC play, which only added fuel to the team’s fire to make it to the postseason. Convincing wins over NIT entrants Toledo and Buffalo were enough for the committee to reward Ohio with a spot on the 13-line and a date with Virginia.

What just happened: Ding dong, the champs are done! Nearly two years after cutting down the nets — and nearly three from their last first round embarrassment — the Cavaliers are going home early after the Bobcats closed out a 62-58 victory on Saturday. Preston nearly notched a triple-double in the game, finishing with 11 points, 13 rebounds, and eight assists. Perhaps the biggest moment of all came from freshman Mark Sears, whose only free throws of the game extended the Ohio lead to four and sealed the deal for the upset.

What happens next: We very nearly saw two upsets in this pod, but No. 12 seed UCSB was unable to pull off the feat against Big East foes Creighton. So will the No. 5 seed Bluejays feel a renewed sense of energy after getting walloped in their conference tournament final and nearly knocked out of the NCAAs? That remains to be seen, but Marcus Zegarowski does look like he’s finding his form — which does not exactly bode well for Jeff Boals and Ohio. But Preston and the Bobcats have faced longer odds than this before, and they’ll be ready for the challenge that Creighton brings.

How they got here: For yet another season, the narrative heading into the season was the Conference USA standings would be dominated by Charles Bassey and Western Kentucky, and everyone else would be invited to come along for the ride if they felt like it. (That’s an exaggeration, of course, but the foregone conclusiveness — and corresponding disappointment — attached to WKU’s supposed success has become a running theme in the C-USA.) Prognosticators, avast! The Mean Green of North Texas have no use for the predictions, and an overtime win over Bassey and the Hilltoppers in the C-USA Championship put a Denton-sized dent in the plans.

What just happened: On Friday, Grant McCasland’s team waltzed into No. 4 seed Purdue’s home state and jumped out to a 32-24 lead on the Boilermakers. Though Purdue would eventually regain their composure and send the game to overtime, North Texas could not be held back from its destiny of reaching the Second Round for the first time in school history. Senior point guard Javion Hamlet led the way with 24 points, 11 boards, and five assists.

What happens next: Like with Ohio, many actually predicted that the upset in this region would come from the 5-12 matchup, but Jay Wright and Villanova proved that they are still a dangerous team with Collin Gillespie, handing Winthrop just its second loss of the season. But this North Texas is experienced (13th most experience, per KenPom) and hellacious on defense (14th nationally in defensive EFG), grading better than Winthrop in both categories. Villanova had better be ready for an even tougher test on Sunday.