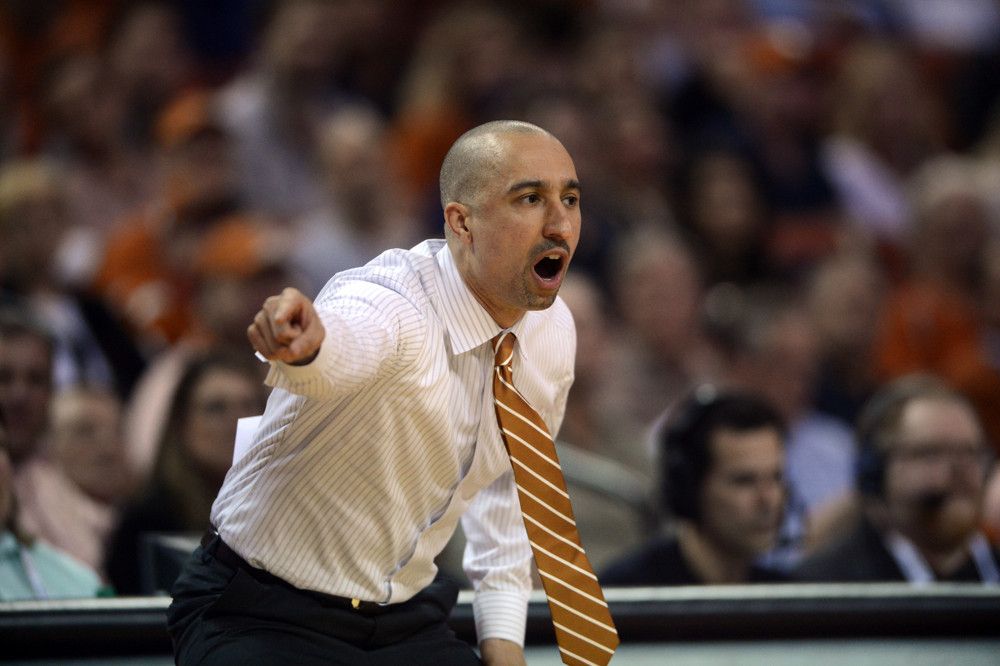 I included Texas in my preseason top 25 rankings as a token of respect considering the Longhorns returned their entire rotation and welcomed a five-star freshman in Greg Brown. On paper, they looked dangerous, but I, of course, noted the team’s failure to live up to those expectations throughout Shaka Smart’s tenure.

Well, they’re surpassing even the wildest of those expectations.

Texas handed Kansas an 84-59 loss on Saturday, marking the Jayhawks’ most lopsided loss ever at Allen Fieldhouse. The Longhorns showcased the kind of suffocating defensive potential that has carried them to an 8-1 record along with a balanced scoring effort that KU simply couldn’t stop.

It was the most impressive of what has been a season full of impressive victories for Shaka Smart’s squad, and he deserves a lot of credit for the way this team is playing. I have been as vocal of a critic of him as there has been over the past couple of seasons, but he should be commended for what he has done with this group defensively and how they’ve improved their ball movement offensively.

The Longhorns have become one of only a handful or so of teams you can rely on to play at a high level every time they step on the court, and that has earned them a spot in the top four in my rankings.

—SMU, Davis off to strong start
—What Tshiebwe’s WVU departure means
—SUBSCRIBE to

How does the rest shake out? Here’s a look at my full top 25 rankings:

Ohio State has been in and out of these rankings but squeak back in mostly because of other teams that continue to lose in this range. A big game at Minnesota — which was the other team I seriously considered for this spot — is looming on Sunday.

Northwestern stays in this spot despite the loss because of its strong resume and how it looked in the second half against Iowa before the game slipped away late. The Wildcats have two huge tests against Michigan and Illinois this week.

I thought about dropping Texas Tech from these rankings completely because they only have two (2) victories over KenPom top 250 teams. Their record is inflated thanks to a soft nonconference schedule. Chris Beard’s squad has played well in their losses … but they’re still losses. This group needs to continue to build a resume.

The Pirates have been among the nation’s hottest teams over the past month, winning seven of their last eight games and starting 5-1 in Big East play. We’ll find out just how good they are on Wednesday when they face Creighton in Omaha.

Clemson earned a spot in these rankings with their win over FSU and then survived a scare from Miami thanks to Aamir Simms. The Tigers don’t have any top tier wins but are 6-1 against the KenPom top 75.

Duke did not play a game but moves up because of the teams that lost.

Virginia Tech’s win over Miami wasn’t anything spectacular but Miami’s a solid team and, more importantly, the Hokies didn’t lose. This week, that was enough.

Tony Bennett’s squad rebounded from their loss to Gonzaga with a business-like win over Notre Dame. That’s nothing to write home about, but it does steady the ship.

Maryland was Michigan’s toughest test of the season (which isn’t saying much) and the Wolverines did what they were supposed to do. The next week has games against Northwestern, Minnesota, and Penn State. Those games will either solidify Michigan among the Big Ten’s top tier or drop them a few pegs.

Saint Louis did not play due to COVID-19 protocols.

The surprising news of Oscar Tshiebwe’s departure headlined the week for West Virginia as the All-Big 12 player opted to leave the team for still undisclosed reasons. That limits this group’s ceiling, yet it was a poor first half marred by turnovers and poor shooting that sunk the Mountaineers against Oklahoma.

Oregon still has not lost since its opener against Missouri, with Saturday’s convincing win over Stanford coming as one of their two wins over teams ranked in this poll (Seton Hall). The Ducks are the clear favorite in the Pac-12.

Missouri suffered its first loss to Tennessee in embarrassing fashion yet responded by giving Arkansas its first loss. The Tigers defense is still among the nation’s elite.

Rutgers with the rare “move-up-despite-losing” move because of other losses and the way they played in their loss to Iowa. A few more made free throws and the Scarlet Knights would’ve knocked off the Hawkeyes. We’re not giving them credit for losing here, but the way they played proved (once again) Rutgers’ worth.

Wisconsin has struggled with athletic teams, a weakness that showed itself again against Maryland. With that said, the Badgers returned to form by handling a quality Minnesota team in a game that was much more of a blowout than the final score indicates.

The Bluejays haven’t looked dominant against teams we would expect, but they continue to rack up close victories. Creighton has now won their last three games by a combined nine points.

This squad is still very inconsistent throughout the course of a 40-minute game. However, when Illinois is on, they are as good as anyone. Those stretches were enough for a win over Purdue.

Houston suffered their first loss of the season as they struggled with Tulsa’s defense. I’m willing to chalk that up as a poor shooting night against a good defense and don’t think any alarm bells need to be raised here.

Alarm bells might be going off in Kansas though for all the reasons mentioned at the top. They were smacked by Texas and had no answer. This group has to have consistent offense from someone other than Jalen Wilson and they need to play to their potential defensively.

Iowa shook off a Christmas Day loss to Minnesota with back-to-back wins over ranked foes, the latter coming on the road. The Hawkeyes continue to solidify themselves as the Big Ten’s best team led by the nation’s best player.

Tennessee looked like the clear No. 3 team in the country when they blew out Missouri. Then they went ice cold against Alabama, who also spaced Tennessee’s defense out and hit a lot of threes. The Vols will be fine, yet that was a sign that this group isn’t invincible.

We knew Texas was elite defensively, but what they did to Kansas was on a completely different level. If their balanced offensive attack continues to produce like that (five players in double figures), the Longhorns might be able to compete with Baylor

The Wildcats did not play a game yet move up to No. 3 because Kansas, Tennessee, and Houston all lost ahead of them. Plus, that win they have at Texas looks really good now.

Baylor remained undefeated by knocking off a pair of mid-majors and one of the Big 12’s worst teams in Iowa State, though they struggled to get past the Cyclones. Iowa State is only the second KenPom top 100 team the Bears have played (Illinois), so that’s something to keep in mind as they get into the heart of Big 12 play.

The Zags finished out the nation’s toughest nonconference schedule with two well-deserved cupcakes before starting conference play, where they handled a very good San Francisco team despite an off night from Jalen Suggs. This group is a machine that continues to hum along.