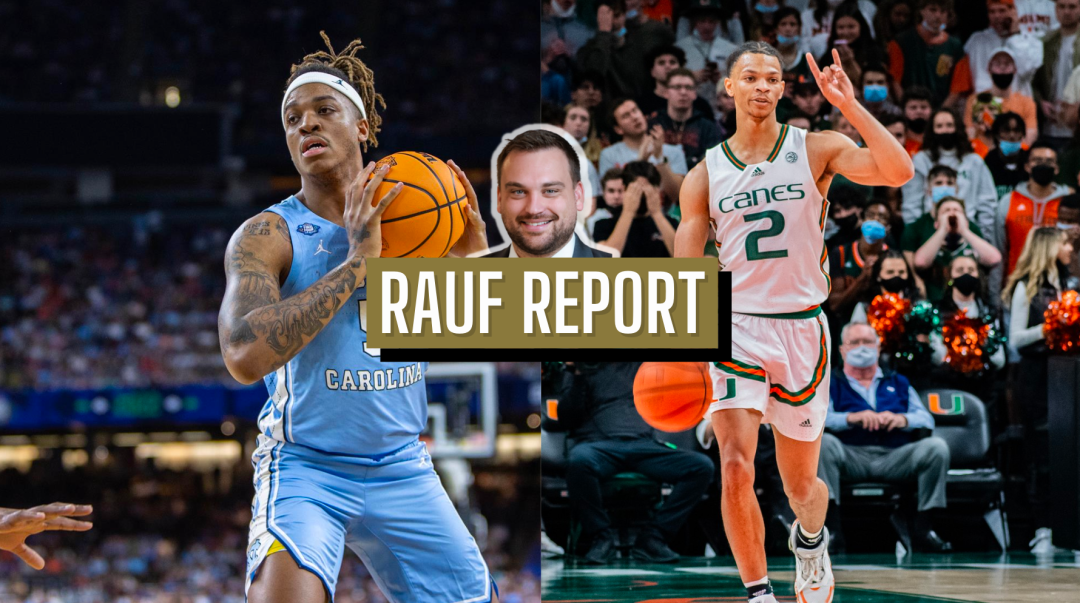 Rauf Report: A comparison for UNC, the country’s most underrated players and more

This week’s Rauf Report breaks down two of the nation’s most underrated players and identifies an apt comparison for North Carolina.

What’s the recipe for a week full of crazy upsets, even in a sport where upsets are commonplace? Play games early in the day right after final exams in front of extremely sparse crowds.

That recipe worked this week. Mississippi State dropped its first game of the season to Drake in a matinee with SEC counterparts Ole Miss and Texas A&M also falling to North Alabama and Wofford, respectively. Yet those results had nothing on Eastern Illinois beating Iowa in Iowa City in the biggest upset the sport has seen since at least 2000.

Gonzaga also set the modern NCAA Division 1 record for longest home win streak with a victory over Montana, a well-deserved feather in the cap for Mark Few’s program.

There was only one ranked-vs.-ranked matchup this week — and we’ll get to Miami’s victory over Virginia in a minute — but I think the most notable performance of the week belonged to North Carolina. We’ll start this Rauf Report explaining why.

Why UNC is more similar to 2007 Florida than you think

Hear me out before you completely dismiss this!

UNC’s start to the season was rough, falling from preseason No. 1 to unranked faster than any team in NCAA history. Its 5-4 start was littered with poor performances mostly caused by offensive struggles, which I broke down after Feast Week.

The Heels have picked up some serious momentum since then. They beat Georgia Tech and the Citadel, thoroughly handling both opponents as they should have. Now, add in back-to-back wins over good Ohio State and Michigan teams, the latter victory being their most impressive performance of the season in my mind.

The offensive woes that plagued UNC during its first nine games were gone. Sure, there was still some puzzling shot selection — that will always be there with Caleb Love — but the offense looked like it did during the second half of last season.

Armando Bacot was more heavily featured. The cuts and off-ball movement that had disappeared early in the season were back. Ball movement and player motion returned, leading to more open looks than they’ve gotten. North Carolina would’ve beaten the Wolverines in a rout had it not been for 12 missed free throws.

That takes us back to the 2006-07 Florida Gators, the last team to win back-to-back national champions. UNC isn’t shooting for that, but it is the third team since then to “run it back” with the same core that played in a national championship game. Nearly all of them — including that fabled Florida team — struggled early in the season before turning it around and dominating the rest of the way.

The hangover effect in these cases appears to be real. Be it a disinterested group struggling to get excited for games after playing on the championship stage or an expectation that repeating the feat will be easy, it seems to take roughly a month before those teams found their groove.

North Carolina is certainly hoping that’s the case, as all three of the teams before them ended up back in the national championship game. Reaching the natty seemed a far cry after the Heels lost to Virginia Tech — now, though, that goal looks much more realistic.

Are we sure Illinois is that good?

Illinois is having the opposite problem as the Tar Heels.

During a really hot 6-1 start, the Illini beat UCLA, went toe-to-toe with Virginia and blew out Syracuse. Since then, they are 2-3 in their last five games. Thursday’s performance, a 93-71 blowout loss to Missouri in the Braggin’ Rights rivalry game, was particularly embarrassing.

Brad Underwood’s squad was doing the things you’d expect from a Final Four contender throughout that hot start. The Illini played excellent defense, were great on the glass and moved the ball offensively. During this five-game stretch, those areas — the effort areas — have all fallen off, impacting their overall efficiency.

It’s harder to explain why exactly this has happened. A lack of effort on the defensive end is obvious in poor rotations and slow closeouts on opposing shooters. Assist numbers dropping drastically backs up the more one-on-one ball we’re seeing from the Illini on the offensive end.

This Illinois team has the talent and versatility to hang with anyone in the country. When it’s right, its balance is what makes it dangerous. It feels like a number of players are vying to be “the guy” when they take the court which has completely thrown off chemistry. Underwood unleashed a fart noise in a press conference two weeks ago when asked about Terrence Shannon‘s leadership, so it seems like that’s severely lacking.

Getting the season back on track now falls on Brad Underwood, which he seems to recognize.

“This one’s on me,” Underwood told reporters after the Missouri loss. “I’ve let the team down. I apologize. I have to do better.”

If he doesn’t figure this out, Illinois’ season could spiral out of control quickly.

Isaiah Wong is the nation’s most underrated, underappreciated star

Now, back to that Miami game we mentioned before. The Hurricanes controlled the game for nearly all 40 minutes (Virginia made a late push that made things interesting), leading by as many as 15 points in the second half.

Isaiah Wong was the catalyst for that. His shot-making and ability to break down opposing defenses off the dribble were on full display and gave Virginia’s typically stout defense fits. He finished with 24 points and five assists to go along with five rebounds — but the way the dictated the flow of the entire game was even more impactful than any stat line.

After the game, Tony Bennett couldn’t help but heap praise on Wong.

“We think Isaiah Wong is one of best scoring guards in our league and the country,” he told reporters postgame. “He can score at different levels. [Reece] Beekman is a good on-ball defender, but Wong finds ways…. They’re playing good basketball.”

Wong and Miami aren’t talked about as being among the best in the country though, and that should change. Wong is a two-time All-ACC selection who returned after leading his team to the Elite Eight last season. He has been an incredibly efficient player throughout his career, too, and is blossoming into more than just a scorer.

Having Wong certainly helps the ‘Canes, but they returned nearly half their minutes from that Elite Eight team and landed two of the top available players in the portal in Nijel Pack and Norchad Omier, both of whom are playing significant roles for them right now. This group has talent, pedigree and a true superstar in Wong.

“The nation’s going to be on notice now,” Miami guard Jordan Miller said after beating Virginia. “We are always underdogs. They don’t really like to show us love, but all we can do is come out and win basketball games. Tonight was a win to prove we’re not a team to play with.”

I understand why people have overlooked Tyler Kolek a little bit more. Marquette’s junior point guard was a role player on last season’s NCAA Tournament team and doesn’t necessarily look the part of one of the Big East’s most important players. His raw scoring numbers wouldn’t change your mind, either, as the team’s fifth-leading scorer.

But Kolek’s play has been the glue behind Marquette’s surprising 9-4 start.

The 6-3, 190-pounder leads the conference in assists (by nearly two per game!) and ranks fourth nationally. His vision and play-making abilities help create easy looks for a team that isn’t full of great shooters.

Oh, that’s also where Kolek comes in — he’s shooting 40.5 percent from deep on the season. He also leads Marquette in steals, just for good measure. Given the fact he leads the Golden Eagles in so many categories besides scoring, it shouldn’t come as a surprise that he also leads them in minutes.

“I hope we can get to the point where other people in our league feel like he’s as good as I think he is,” Shaka Smart said after Kolek scored 29 points in a double-overtime loss to Providence this week.

Even if that respect doesn’t come, his impact on the Golden Eagles is vital. His play will determine how far Marquette will or won’t go this season.

If you thought San Francisco would go back to toiling away in the middle of the WCC standings, far away from national relevancy after losing Todd Golden to Florida, you likely weren’t alone.

Which means you’re not the only one who was wrong, so cheer up!

The Dons are 10-4 under new head coach Chris Gerlufsen with three wins against KenPom top-100 opponents. They ended UNLV’s unbeaten start over the weekend before picking up a 97-60 blowout victory over a ranked Arizona State squad. San Francisco led by as many as 47 points, and the final margin of 37 is the fourth-worst loss suffered by any ranked team against an unranked foe in the last 30 years.

It was a resounding display that highlighted everything San Francisco does well. Led by senior Khalil Shabazz, the Dons have maintained a 3-point heavy attack (fourth in 3-point attempt rate) while rolling on the three-guard lineup. On the defensive end, their focus is on limiting the long ball, which they’ve also done successfully (15th in opponent 3-point attempt rate, 22nd in opponent 3-point percentage).

That strategy — focusing on the 3-point line at both ends — was a staple of Golden’s time in charge at USF and of the Kyle Smith era before that. It shouldn’t really be a surprise considering Golden was an assistant on Smith’s staff before being promoted to head coach, and Gerlufsen was on Golden’s staff before replacing him.

Keeping that coaching continuity has helped San Francisco maintain a strong culture and a defined style of play, both of which have helped the program keep and attract talent.

Gonzaga is still head and shoulders above everyone else in the conference, yet the Dons look strong enough to seriously challenge Saint Mary’s for second. Their nonconference performance has put them in the early NCAA Tournament conversation at the very least.