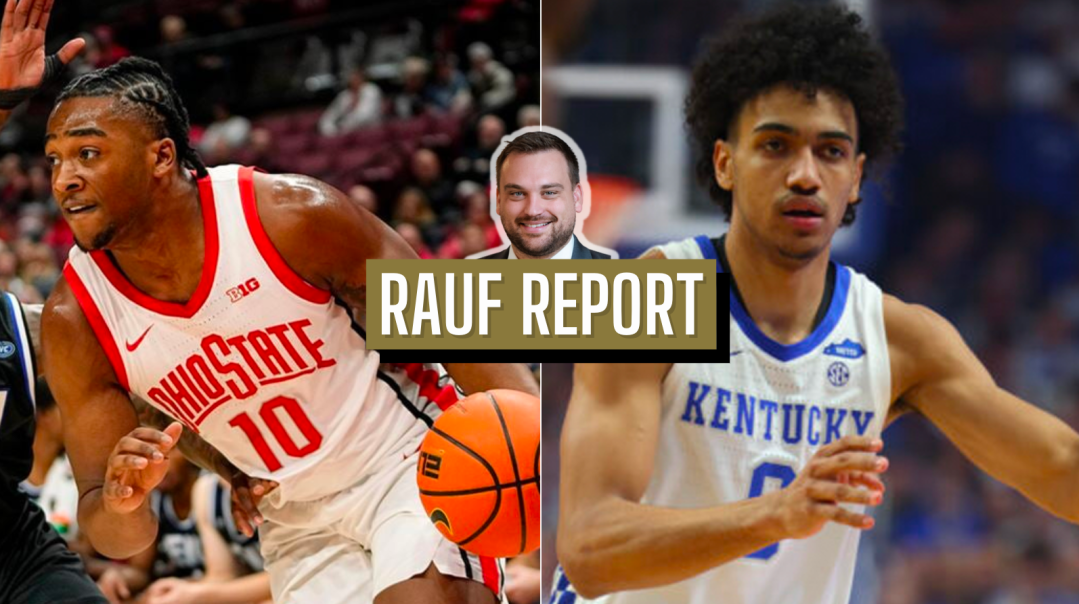 The Rauf Report brings you the biggest takeaways from the best college basketball weekend in over a decade.

We may have just experienced the greatest sports weekend of all time.

Between the insanity that was the World Cup final, the Vikings pulling off the biggest comeback in NFL history, whatever happened at the end of the Patriots-Raiders game, three NFL games going into overtime and seven college football bowl games, there were plenty of ways to scratch that sports itch.

Of course, even up against all that football/futbol action, college basketball delivered its own drama.

There were five matchups between top-20 teams on Saturday, marking the first time that had happened since 2009. That group of games doesn’t even include the one that brought us the Pete Nance buzzer-beater to force overtime against Ohio State — and potentially saving North Carolina’s season in the process.

The outcomes of those games will continue to resonate across the college hoops landscape all the way to Selection Sunday. Past the results themselves, though, what did this weekend teach us about the basketball to come over the next three months?

—Rauf: What to make of UCLA, star guards worth monitoring and more

Let’s start this Rauf Report with Alabama, as the Crimson Tide finally showed some warts in their loss to Gonzaga.

OK, so it’s really just one wart, but it’s a massive and potentially crippling one for an Alabama program that wants to contend at the sport’s highest levels.

The Crimson Tide currently rank 319th nationally in turnover rate (21.9 percent), the fifth-worst of any power conference team and the worst mark of any team that ranks in the KenPom top 60. Eight different players — including four of the team’s top six rotation players — currently have individual turnover rates over 21 percent, and three reserves are struggling with rates over 30.

Nate Oats’ system is predicated on not taking mid-range jumpers and playing as fast as possible. Alabama is accomplishing both of those goals — it’s sixth nationally in lowest percentage of mid-range shots and fifth in adjusted tempo, per KenPom — but those principles do create some issues.

When it comes to playing fast, it’s easy to try to play too fast. Players can get out of control and make poor decisions, choosing to prioritize quickness over safety.

The Tide are so good that they can sometimes get away with their carelessness even against the nation’s best! They turned it over 22 times against UNC and 15 times against Houston — and still, Alabama managed to knock off the No. 1 team in the country on both occasions.

In their two losses to UConn and Gonzaga, on the other hand, the Crimson Tide turned it over 21 times in each. That drastically lessened their margin for error in each of those games and ultimately proved to be too much to overcome.

Against Gonzaga, turnovers completely changed the game. Alabama’s largest lead of the game came when it led 20-11 in the first half, establishing complete control and seizing all the momentum. Right after that, though, the Tide turned it over on three straight possessions and quickly trailed just two and a half minutes later. They led for a mere 13 seconds the rest of the game.

Alabama is a really, really good team. Brandon Miller is spectacular, its guards are spectacular in every other facet of the game and the Tide’s length gives them tremendous defensive upside. But this squad won’t reach its full potential without curbing this turnover problem.

Elsewhere in the SEC, Kentucky suffered a 10-point loss to UCLA on Saturday to snap its four-game winning streak. The defeat also dropped the Wildcats to 0-3 against teams ranked in the KenPom top 40.

Kentucky’s disjointed start to the season can be blamed on a few things, whether injuries to Oscar Tshiebwe and Sahvir Wheeler or streaky shooting or freshmen adjusting to big roles in the college game.

But a big reason for UK’s lack of success against the best teams it has played is because Jacob Toppin — who the Wildcats were hoping would have a breakout season — hasn’t been anywhere near as effective as many predicted. He scored just five points on 2-of-10 shooting against the Bruins, something that’s starting to become a trend.

I’ve talked at length about how Kentucky needs Cason Wallace to become a star if it’s going to win a national championship, and he has shown flashes of that elite potential. But John Calipari also needs to get more production from his frontcourt outside of Tshiebwe, and Toppin has been inconsistent in answering the bell. His production against top-level teams is something that can really swing Kentucky’s season, for better or worse.

Mississippi State is nowhere near as good as the AP thinks

I didn’t mean for this column to be so SEC heavy, but here we are!

Mississippi State should be commended for its start. The Bulldogs are 11-0, one of the five remaining unbeaten teams in college basketball and one boasting a top-10 defense under new head coach Chris Jans. But pundits are putting the cart before the horse by by putting them in the top 15 of the AP poll and CBS Sports’ power rankings.

Seven of Mississippi State’s 11 victories have come against Quad 4 competition, with two more being in Quad 3 territory. The Bulldogs are 2-0 in Quad 1 games, knocking off both Marquette and Utah on a neutral court, yet neither are the type of statement victory that the other teams in the top 15 have.

Simply put, Mississippi State’s resume is lacking, and it hasn’t been dominant in games where it should be. In the last two games, the Bulldogs led Jackson State by just four points with 3:30 left and then trailed Nicholls at halftime before winning by two after the Colonels missed a game-winning three at the buzzer.

That’s not indicative of a team playing at a high level!

Part of the reason is how Mississippi State struggles offensively. It ranks just 100th in offensive efficiency, per KenPom, and is outside the top 300 in 3-point shooting. The Bulldogs have won games because of their defense and the way Tolu Smith has dominated lesser opponents and/or smaller teams inside.

Tougher tests await Jans’ squad. They will face Drake on Tuesday — just the third KenPom top-100 team the Bulldogs will have played — before starting SEC play with Alabama and Tennessee.

Mississippi State is ahead of schedule under their new coach, but we’ll find out just how legit the start was over the next two weeks. I think the rankings in KenPom (No. 32) and Torvik (No. 45) are more indicative of how good this group actually is than their current placement in the AP poll.

Chris Holtmann and Ohio State are gaining a reputation for being able to develop guards, most famously turning Malaki Branham from the No. 38 overall recruit (per the 247sports Composite) into a top-20 NBA Draft pick after his freshman season.

The downside of that, though, is that the Buckeyes didn’t plan to have Branham leave so early in his collegiate career. Simply put, he got too good too early, leaving this Ohio State roster with a potential hole in the backcourt the coaching staff wasn’t expecting.

Luckily, Brice Sensabaugh has been overachieving during his first 10 games in a Buckeyes uniform. He leads the team in scoring despite only starting two games and has shown incredible shot-creation ability for someone who is 6-6 and 235 pounds. He even hit what would’ve been the game-winner for Ohio State if not for Nance’s heroics.

Sensabaugh was a borderline top-50 prospect but is now being discussed as a potential first-round pick. If Branham’s trajectory is any indication, he will be a potential lottery pick before the end of the season.

Ohio State would welcome that, too, because it has needed his explosiveness on the perimeter — even if he also ends up being too good too quickly.

Creighton’s shooting tells the story of its season

Let’s dive into why Creighton has suddenly lost its way. The Bluejays lost their sixth consecutive game on Friday, falling to an even 6-6 on the season — a far cry from the immense hype they held just a few weeks ago.

There are a few factors at play here, including improved competition and Ryan Kalkbrenner‘s availability, but the core of Creighton’s issue isn’t that complicated: they simply aren’t making enough shots.

Here’s a look at their splits during their 6-0 start and their current 0-6 slide:

We often make basketball more complicated than it needs to be. A lot of times, though, it simply comes down to making shots. Creighton is still getting a good number of open looks — it just isn’t knocking them down at the same clip. Not having Kalkbrenner certainly affects things, but not to this extent.

Which version of Creighton is the real one? Is it the one from the first six games that looked like a legitimate Final Four favorite? Or is it the one we’re seeing now?

The answer likely falls somewhere in between. Creighton was an average shooting team last season that added some snipers in Baylor Scheierman and Francisco Farabello. Nevertheless, the struggles of the past six games are worse than any elongated stretch the Bluejays went through in 2021-22.

I have faith the bounce-back will come for Creighton. They just need to see the ball start going through the net.