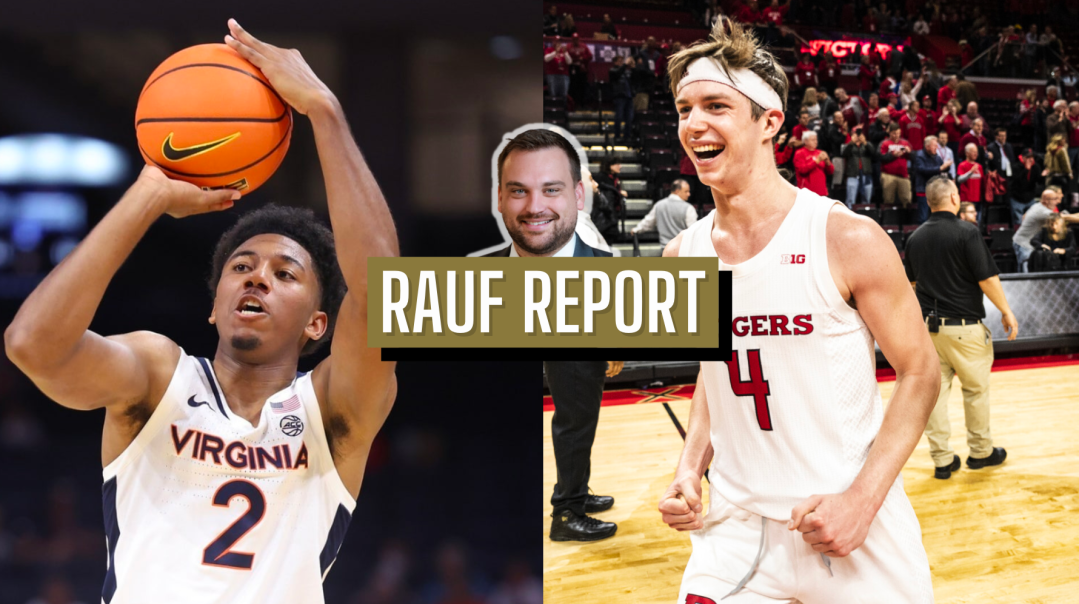 The Rauf Report details the biggest college basketball takeaways of the week, headlined by recent struggles from the nation’s top-ranked team.

Talk about a wild week in the world of college basketball.

Off the court, Texas announced the firing of Chris Beard on Thursday, a decision stemming from his arrest for allegedly strangling his fiancée nearly a month ago. The legal process still has to play out for Beard, but the Longhorns are now looking for a new permanent head coach. Assistant Rodney Terry will serve as the interim for the remainder of the season).

On the court, wacky college basketball things are happening. On Thursday night alone, Iowa erased a 21-point deficit to upset Indiana while a late bucket from Rasir Bolton kept Gonzaga from falling victim to San Francisco.

Yet the biggest upset of the week happened Monday when top-ranked Purdue was beaten in West Lafayette by Rutgers. It was the second straight season in which the Boilermakers had risen to No. 1 in the AP poll and were then knocked off by the Scarlet Knights.

It felt like a loss was coming for Purdue, which needed overtime to beat Nebraska and played a tight game with Davidson. The Boilers also needed a late winner from Fletcher Loyer to bat Ohio State on Thursday. We’ll start this Rauf Report with a look at what’s causing this recent slide from Purdue and what’s behind Rutgers’ surge.

Purdue’s offense is based around Zach Edey — as it should be. The 7-4, 290-pounder is ruthlessly efficient around the basket on both ends and has been the clear National Player of the Year favorite through the season’s first two months.

The idea behind their offense is to get as many shooters on the floor around Edey to give him as much space as possible to work inside and stretch opposing defenses. It’s a common concept for teams with a dominant big and the reason why quality players like Caleb Furst and Mason Gillis aren’t getting the kind of minutes we expected in the preseason.

During the season’s first month, when Purdue surged into the AP poll’s top 5, the strategy was working perfectly. But things have hit a bit of snag recently. Its shooting numbers have plummeted despite attempting more shots from the perimeter, causing a noticeable decline in the offense as a whole.

There are decent enough individual shooters on this Purdue team, but this collective slump has lasted a month now. Matt Painter‘s offensive strategy to go smaller isn’t anywhere near as efficient or effective when those players can’t shoot.

The Boilermakers may find themselves at a crossroads this month. Will they trust their shooting to return, or will they change their offense away from the style that brought them to the top of the polls in the first place?

The Scarlet Knights have been on a tear over the last few weeks, winning each of its last five games. That includes the victory over No. 1 Purdue, a 24-point drubbing of Wake Forest and a double-digit win over Maryland.

Steve Pikiell’s squad has quietly been solid all season. All four of its losses have come by seven points or fewer, three were to power-conference foes and two (Ohio State and Seton Hall) went down to the final possession. There is also Rutgers’ 15-point win over Indiana in early December, but there’s no doubt the Scarlet Knights are playing at a different level recently.

That’s because Paul Mulcahy is back and playing at an elite level. The 6-7 guard suffered a shoulder injury against UMass Lowell and missed four games — including losses to Temple and Miami — but is now fully healthy and it’s showing.

Rutgers needed someone to step up offensively following the departures of Ron Harper Jr. and Geo Baker this offseason. Clifford Omoruyi has emerged as a beast inside and Loyola-Maryland transfer Cam Spencer is playing better than anyone expected, but Mulcahy is still the point guard. He’s the one with the ball in his hands the most, dictating everything offensively.

When he’s giving the Scarlet Knights this level of efficient production, the Rutgers offense becomes more than just a complement to its elite defense — it makes them dangerous on both ends. This run will continue for as long as Mulcahy is able maintain this level of play.

Virginia was one of the nation’s biggest surprises during the season’s first month, sprinting out to an 8-0 start that included victories over Baylor, Illinois and Michigan — all away from home.

The Wahoos were playing Tony Bennett-level defense again and the offense was clicking at a level it hadn’t been at since the 2019 championship season. UVA scored at least 70 points in each of its first six games thanks to what looked like a breakout season forming from Reece Beekman. He showed the ability to create his own shot, something this program has desperately lacked since Ty Jerome, Kyle Guy and De’Andre Hunter left campus.

Since that sixth game, Virginia has not looked like one of the nation’s elites. It is 4-3 overall in the last month with two of those wins (Florida State and James Madison) coming by five points to lesser opponents. The Cavaliers have only scored 70 points once in this stretch — a 74-56 win over a Georgia Tech team that has yet to win an ACC game.

Uncoincidentally, this slide comes at the same time Beekman’s production has dipped. He suffered a hamstring injury just four minutes into the game against James Madison and played in the following two games against Houston and Miami before missing a contest with Albany.

The difference in both Beekman’s play and Virginia’s success pre- and post-injury is stark.

There is some hope that Beekman is getting healthier and playing better. The 12 points in scored in Tuesday’s loss to Pitt were the most since the victory over Michigan in the ACC-Big Ten Challenge. He also took more shots and had a higher offensive rating at any point in the past month, too.

Tony Bennett’s system is predicated on elite defense and precise, smart offense. That offense, though, goes to another level when it has a high-level playmaker and shot creator. Beekman has shown he can be that guy and produce in that role against top-tier competition. However, Virginia may continue to struggle until he gets back to that point.

It should go without saying, but preseason rankings always have a bit of biased baked into them. Teams that were successful the season before and return impact players automatically get a bump.

That was the case with Auburn. Despite losing first round picks Jabari Smith and Walker Kessler, the Tigers did return its starting backcourt and a good portion of its rotation. It also brought in a highly rated freshman (Yohan Traore) and top transfer (Johni Broome).

Preseason expectations were warranted. But that preseason hype typically fades and is replaced by substance two weeks into the season.

That hasn’t been the case with this Auburn team and its loss to Georgia on Wednesday should mercifully drop the Tigers out of the Top 25. Truthfully, Auburn has not been top-25 caliber for a while, but enough voters have placed the Tigers in their respective ballots to keep Bruce Pearl’s squad ranked.

The Tigers did get off to an 8-0 start, yet all games came against lesser competition. The highest-ranked teams it faced, per current NET rankings, were Northwestern — perhaps the worst team in the Big Ten — and Bradley. In its last six games, Auburn is just 3-3, including a 1-3 mark in Quad 2 games. The Tigers have yet to even play a Quad 1 game this season.

Auburn’s defense is comparable to last season’s even without two elite rim protectors like Smith and Kessler. It’s still in the top 15 nationally in efficiency largely thanks to continued excellence defending the 3-point line and the rim. Broome is one of the nation’s best shot-blockers.

Offensively, however, the Tigers are wildly inefficient. They rank:

Auburn is still going to make the NCAA Tournament and will likely win 20 games. Neville Arena (formerly Auburn Arena) is still one of the country’s best home-court advantages. But the offensive issues are a major problem, especially considering its backcourt has gotten even more erratic.

Queens is exceling in its first Division 1 season

Five college basketball programs made the transition to the Division 1 ranks this season — Lindenwood, Queens, Southern Indiana, Stonehill and Texas A&M-Commerce. All are going through the typical transition struggles, posting sub-.500 records and ranking outside the KenPom top 250.

All, that is, except for one – Queens.

The Royals are a sparkling 12-4 with a KenPom top 100 win (Marshall) and close losses to both George Mason and Nebraska. On Thursday, they went on the road and beat Bellarmine — the same Bellarmine team that beat Louisville and Murray State.

Guards Kenny Dye (17.3 ppg, 4.9 apg, 4.3 rpg) and AJ McKee (14.2 ppg, 4.8 rpg) combine to form one of the ASUN’s best backcourts and have paced this hot start. Both look like all conference candidates with Dye being perhaps the best player in the league not named Darius McGhee.

Queens currently has the ASUN’s fourth-best adjusted efficiency margin, trailing only traditional conference powers Liberty, Florida Gulf Coast and a quality Jacksonville squad. This is a team and program ready to compete at the top of the conference, making them a story worth monitoring over the next two months.