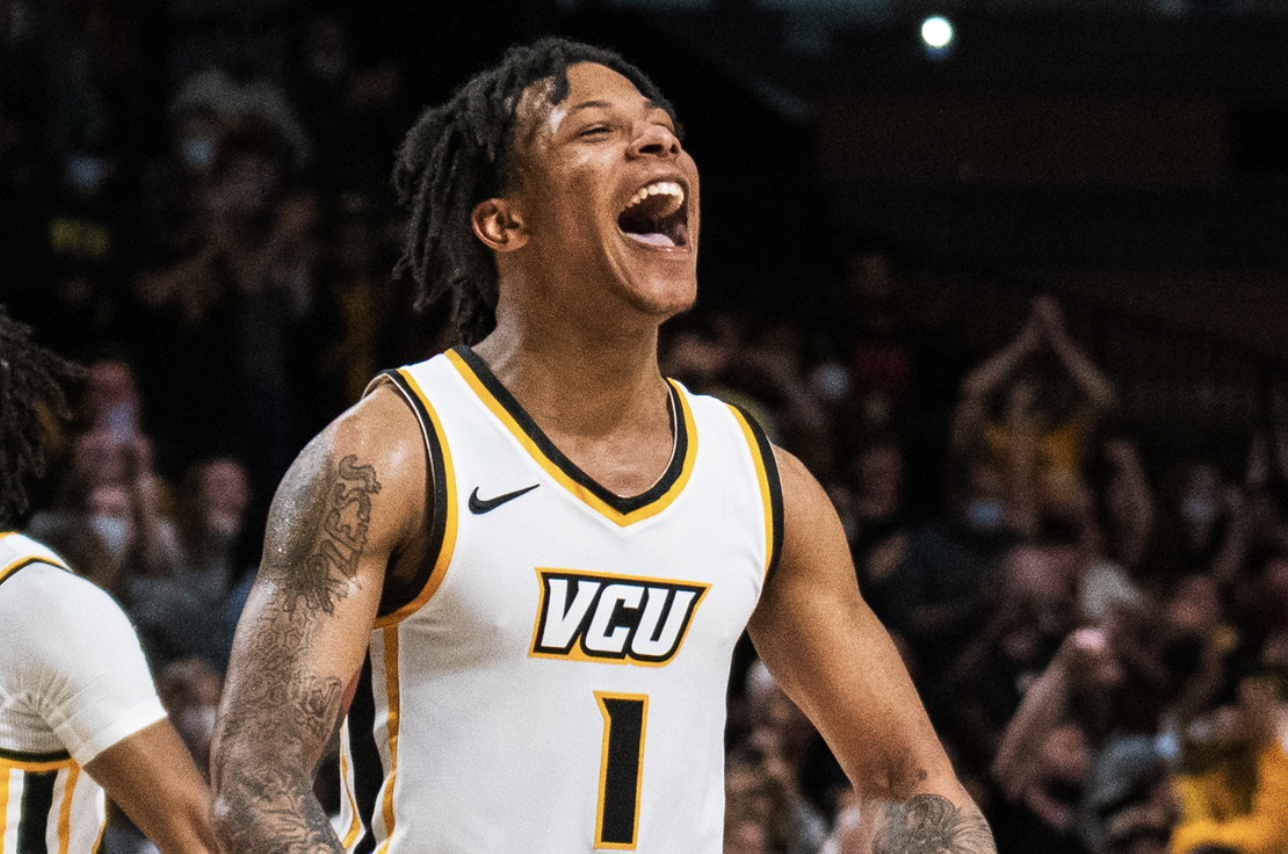 The Rauf Report details the biggest college basketball takeaways from the week, headlined by two teams that could make noise in March Madness.

Welcome to the first Rauf Report of March! We’re approaching that time of year when it’s really put-up-or-shut-up time.

Conference tournaments are underway and, for those in conferences with tournaments that start next week, there’s one final regular season game before postseason action.

All of that means one thing: there is no more time for a team to improve or fix an issue that has been plaguing them. Gone are the days of “turning it around” or “getting back on track.”

Winning is the only thing that matters now.

There are a couple of teams that have turned the corner at the right time and are playing their best basketball of the season. TCU and VCU both went from bubble teams to feeling comfortable about their at-large chances.

We’ll start this Rauf Report with a breakdown of why those teams will be tough outs in the NCAA Tournament.

TCU has become the middle seed no one wants to face

Let’s begin with the Horned Frogs, who picked up a quality win over Texas Tech on Saturday and following that up with two extremely impressive performances against Kansas this week.

Tuesday’s matchup resulted in a 74-64 victory in Fort Worth, while Thursday’s game was a 72-68 loss even though TCU controlled the first 30 minutes.

Jamie Dixon‘s squad has taken significant strides over the last few weeks. Their athleticism, length and defensive effort have been on full display all season long, but the offense is finally starting to click into gear for the Horned Frogs.

Here’s a look at what they’ve done over their last five games against the rest of their season against relatively decent competition.

There are a number of reasons for that uptick — a team full of transfers finally settling into playing together, more transition opportunities, etc. — but the play of point guard Mike Miles has been as big as any.

The sophomore is averaging 16.4 points and 4.2 assists over the last five games, headlined by a 26-point, four assistant performance against Texas Tech and a 19-point, six-assist outing in the win over Kansas.

Miles is capable of playing like a star — he has six games with at least 20 points scored — and he’s been doing so on a more consistent basis lately. His dynamic combination of playmaking and shot creating opens up the rest of TCU’s offense, which helps explain their recent rise.

When the Horned Frogs are rolling, they’ve shown they can compete with anyone in the country, and they’re rolling right now. They were already a tough team to face with their length and athleticism but now, with the offense clicking into gear, this is a dangerous team no top seed is going to want to see in their first weekend pod on Selection Sunday.

VCU will be a dangerous team in the NCAA Tournament

I wrote two weeks ago that VCU deserved more national attention because, well, they do.

Since then, the Rams have looked the part of a dominant A-10 team capable of making some noise in the NCAA Tournament. Their biggest statement came on Tuesday in the form of a 74-51 victory over a St. Bonaventure team that was in the bubble conversation coming into the game.

VCU is now 18-3 over its last 21 games without a bad loss during that stretch, yet finds itself in a comprised position because of early season struggles without star guard Ace Baldwin, who ruptured his Achilles in June.

The Rams were just 2-4 in games against the top three quadrants without Baldwin but are 13-3 in such contests since his return, including 2-0 in Quad 1 opportunities.

It’s obvious to see Baldwin’s impact on the court, too. He is the team’s best offensive and defensive player, per EvanMiya.com, and every other player’s efficiency increases when Baldwin is on the court. That’s the epitome of making your teammates better.

The Rams have been much better since Baldwin has been back than their projected double-digit seed would suggest. As a result, there are going to be some unhappy higher seeds when VCU pops up in their region.

No team is as bubblicious as Rutgers for reasons laid out in a Rauf Report from last month. The Scarlet Knights have a string of phenomenal wins, yet also have some atrocious early-season losses that offset those to a degree.

HeatCheckCBB bracketologist Lukas Harkins still has them just outside the cutline in his bracketology update, but there is a real chance Rutgers wins the necessary game or two it needs to win in the Big Ten Tournament to earn a trip to the Big Dance.

And, if the Scarlet Knights find themselves in a pinch, Ron Harper Jr. will bail them out of it.

That’s exactly what happened on Wednesday night in a bubble showdown with Indiana. Rutgers came back to build a late lead and then gave it away before Harper saved the day.

“Ron has just gotten better his whole career and wants to take those shots,” head coach Steve Pikiell said after the game.

“Coach Pikiell always says he trusts me in that moment,” Harper said postgame of his shot. “Once I let it go, it felt real good. I got good rotation on the ball and it was in rhythm. I just saw it go up and knew it was good.”

Harper has shown he doesn’t want to just take those shots — he’s better than most at making them.

If you’re feeling a little déjà vu, well, it’s because he hit another incredible game-winner at the buzzer in December to beat then-top ranked Purdue.

March is a time for late-game heroics, buzzer beaters and big shots. No one has done more of that this season than Harper. Don’t be surprised if he has another signature moment in the Big Ten Tournament, and then again in the NCAA Tournament if Rutgers gets there.

From a current Big Ten star to a future one.

Johnny Davis is rightfully stealing all the headlines for Wisconsin as he’s the favorite to win National Player of the Year, but freshman point guard Chucky Hepburn looks ready to take the reins as the program’s star player.

He’s already one of Wisconsin’s best defenders, leading the Badgers in steal rate and often pestering opposing point guards. Hepburn also takes care of the ball the way you would want out of a true point guard. The freshman has turned it over just seven times in the last seven games with 22 assists in the same time frame.

All of that is important for the role he has now. However, Hepburn has also demonstrated the scoring chops over the same stretch to indicate he can thrive in a larger role in the offense once given the chance.

He’s averaging 10.3 points per game over Wisconsin’s last seven games — up from his 8.2 season average — including a career-high 17 points in Wednesday’s conference title-clinching victory over Purdue.

Of course, this is the shot everyone will remember, and rightfully so. It’s not every day a player hits a game-winner with a conference title on the line.

He thrived in pick-and-roll sets — a staple of Wisconsin’s offense — reading the defense and making smart decisions to either attack the rim, shoot the 3, or find the open man. Hepburn also showed an understanding of how to manipulate defenders with his ballhandling.

We joke a lot about Wisconsin essentially a team of role players being carried by Johnny Davis. He is certainly the star, but the Badgers need others to step up consistently alongside Davis if they’re going to make a run.

Hepburn is coming into his own at the right time while also giving Wisconsin fans a promising glimpse into the future.

We’ll close this Rauf Report with a look ahead to the weekend where essentially everything college basketball related is going to center around Saturday’s Duke-UNC game because it’ll be Mike Krzyzewski‘s final game coaching at Cameron Indoor Stadium.

I’ve already seen a large number of college basketball fans complaining about it and are going to view the weekend’s festivities with more anger and annoyance than reverence and appreciation, and that’s a shame.

Coach K turned Duke into the program everyone loved to hate, so there’s an element of that to be expected. And, yes, there are some things that deserve it — like his occasional postgame lectures to opponents about sportsmanship in handshake lines — but most of the hate was brought on by the fact the Blue Devils have consistently been so damn good throughout his tenure.

That is why he’s being celebrated the way that he is. We may never see someone accomplish these feats again.

His 1,196 wins are most in Division-1 history. The five national championships he won at Duke are the second-most ever behind John Wooden. Rick Pitino is the only other current head coach with more than one national title, though his Louisville title is vacated by the NCAA.

His 12 Final Four appearances are tied with Wooden for the most ever. Tom Izzo is the next highest active coach with eight.

Coach K is the most successful coach in college basketball history, and he deserves to be celebrated. Try to put your hate aside for just a little bit to at least acknowledge the career he has had.