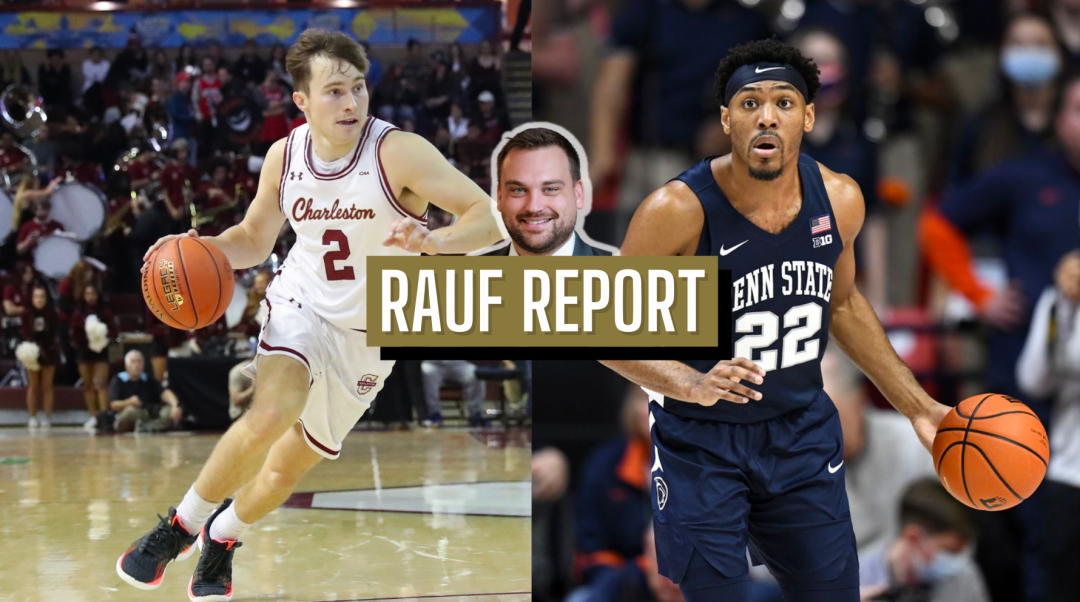 The Rauf Report breaks down the biggest takeaways of the college basketball weekend, including a look at the historic game no one saw.

Happy New Year to you and yours!

College basketball closed out 2022 with a banger of a slate that saw 14 ranked teams in action on Saturday, two of which lost to unranked opponents. Six of those games were also decided by six points or less.

Winning on the road is one of the toughest things to do in college hoops. With conference play getting underway across the country, we saw many of those teams struggle in ways they didn’t during the course of nonconference play.

Of course, those performances also showed us what separates good teams from great teams at the top of the polls. Teams like Houston, Kansas and Texas came back to avoid ending the calendar year on a down note.

We saw what differentiates good teams from great teams this weekend

You’ve likely heard the adage that a team needs quality guard play to win in March. But what’s more important — both in March and throughout the season — is having players who can handle the ball and make plays out of an offensive construct.

It boils down to this question: Does a team have someone, or multiple people, who can put pressure on a defense on their own?

The teams that survived the weekend have that type of player, in addition to a quality defense. Here’s how some of the nation’s top teams survived those tests:

You’ll notice that, in some cases, it was the players you’d expect to come through clutch that did. But Houston and Texas had role players step up, a nod to the depth of playmakers on both rosters.

On the flip side, two highly ranked teams were not able to come through in these situations.

Poor defense let both UConn and UNC down. And, in the Huskies’ case, they were unable to generate offense in the clutch, lending credence to some of the questions about their backcourt.

These are one-game sample sizes, and these teams have two and a half months to get better. However, this is definitely something to keep in mind for each of these teams.

The historic matchup no one saw

As expected, the day fit the occasion. The game between top-5 teams was a sellout, broadcast nationally by CBS.

It shouldn’t be a surprise that these matchups don’t happen often in the one-and-done era considering most top prospects enter the NBA Draft after one season.

But did you know we had the second of these such matchups in the one-and-done era on Friday?

You probably didn’t. And that’s OK — because you weren’t the only one.

That game was played in front of an announced attendance of 9,023 fans — roughly half of Colonial Life Arena’s 18,000-person capacity — and wasn’t even broadcast on cable.

The game itself, though, was fitting of the hype of two top prospects squaring off. Bates went off for 36 points on 52 percent shooting, setting a new career-high.

Jackson looked strong in his own right, posting 24 points (also a career-high) and nine rebounds in what was a 74-64 victory for the Gamecocks.

There is some context required to the lack of hype, especially compared to that Barnes-Davis showdown. For starters, no one is going to confuse Eastern Michigan and South Carolina with the bluebloods of Kentucky and North Carolina. Neither program is currently ranked or even playing all that well: EMU is now 3-10 while the Gamecocks are 7-6.

Bates and Jackson also both reclassified up a year and weren’t the top-ranked prospect in those new classes, but they weren’t slouches either. Bates moved into the No. 5 spot in the 2021 class, according to the 24/7Sports Composite, while Jackson ended up at No. 6 in the 2022 class.

Both are also still projected NBA Draft picks. Jackson is slotted as a top-15 pick in ESPN’s latest mock draft with Bates checking in as a second-rounder.

I’m baffled this game didn’t get any hype at all, even among NBA Draft pundits. But I guess we have our answer to the age-old question: “If a tree falls in the forest but no one is around to hear it, does it make a sound?”

What has happened to this Georgetown program?

A 29-point home loss to Butler on Sunday serves as a new low point for the Hoyas. They’re currently 5-10 overall, struggling through a five-game losing streak, and still have not won a conference game since capturing the 2021 Big East Tournament title.

March 13, 2021 is the last time the Hoyas were victorious against a Big East team.

On the court, Georgetown looks lifeless. It is atrocious defensively (281st in adjusted efficiency), it doesn’t rebound well — especially for a team as tall as it is — and it doesn’t shoot well. There isn’t much the Hoyas do well at this point other than blocking shots.

Off the court, though, things are worse. This once-proud fan base has become completely apathetic. The program gave away free tickets to its December 7 game against Siena. Only 3,526 people showed up. For context, Capital One Arena, where the Hoyas play their home games, holds 20,600 people. Social media is filled with fans proclaiming the program has lost its way and is completely hopeless.

Analytical projections seem to think so, too. KenPom doesn’t project the Hoyas will win another game this season, which would put their final record at 5-26, just shy of last season’s 6-25 mark.

Poor on-court play is one thing, but with no positive direction as a program and a disinterested fan base, what’s next? It’s become impossible to ignore how bad things have gotten for a once-proud Georgetown program.

Penn State continues to put forth an outstanding season after a victory over Iowa on Sunday pushed them to 11-3 on the season and 2-1 in Big Ten play. The Nittany Lions led the Hawkeyes by 18 points at halftime and held on thanks to their new identity: excellent 3-point shooting (47.4 percent), ball control (only nine turnovers) and Jalen Pickett running the show.

Pickett has emerged as perhaps the best point guard in the country and does everything for this Penn State team. He recorded 26 points, seven rebounds and six assists on Sunday, leading the team in all three categories. He leads them in all three on the season, too.

Pickett being mentioned among the best point guards in the country is unfathomable considering he did not have a single D1 scholarship offer out of high school. He attended Siena after spending a year in prep school before transferring to Penn State prior to last season.

I spoke with him about that incredible journey, what makes this Penn State team special and more in a feature you can read with a HC+ subscription.

#RankCharleston – and fear the cougars in march

My colleague Riley Davis also has a phenomenal HC+ article on the College of Charleston and how Pat Kelsey has built one the nation’s elite mid-majors (seriously, you need that HC+ subscription).

At this point, though, Charleston deserves its Top 25 ranking and looks like a potential Cinderella in the NCAA Tournament.

The Cougars are 14-1 on the season with the lone loss coming at North Carolina during the first week of the season in which Charleston led most of the game. They also have wins over KenPom top-100 teams in Virginia Tech (30), Kent State (64) and Richmond (98).

But the biggest win might’ve been Saturday’s overtime thriller against Towson, another elite mid-major team and Charleston’s biggest threat at the top of the CAA. The Cougars led by double digits most of the way, responded after a late Towson run and pulled off the victory in overtime on the road.

It was the kind of balanced, high-level performance we have come to expect from Charleston, which KenPom projects to finish the season with a 29-2 record. If that happens, this group will certainly receive an at-large bid.