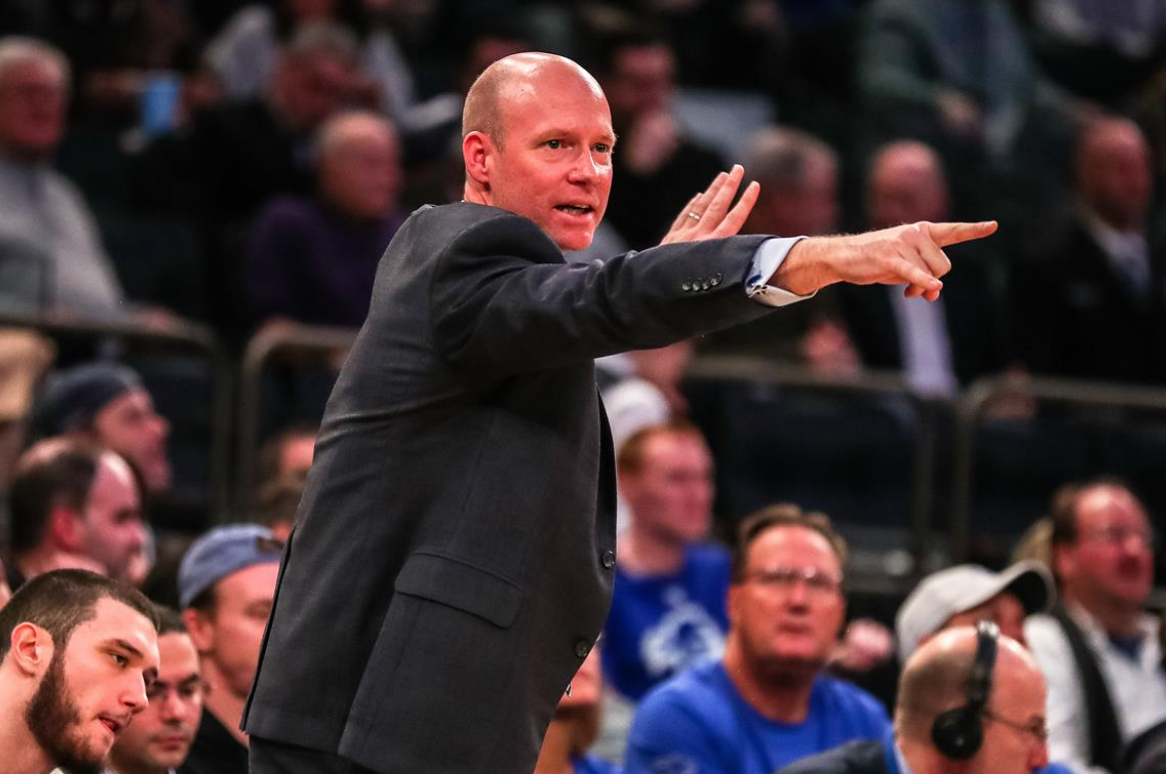 Brian Rauf reveals his biggest college basketball takeaways from the week, including looks at Seton Hall and Arizona, in a new Rauf Report.

I’ve harped on this for nearly two weeks now, but the biggest college basketball takeaway of the season so far is that everyone can be beaten. There is no untouchable team, making for an extremely exciting and unpredictable season.

Just ask Purdue. The Boilermakers were dominant throughout the season’s first month and rightfully rose to No. 1 for the first time in program history after Gonzaga and Duke lost in consecutive weeks. Then, well, the shot of the season happened.

I mentioned concerns about Purdue’s defense in the past and the Boilermakers went and gave up 70 points to a Rutgers team that failed to hit that mark against Merrimack, Lafayette and Illinois in its last outing. The Scarlet Knights came in having lost four of their last five games — including defeats at the hands of Lafayette and UMass — so naturally they knock off No. 1, right?

College basketball is the absolute best.

New Jersey was the center of the sport’s universe on Thursday night and not just because of Rutgers’ upset. Seton Hall also knocked off Texas in Newark, solidifying the Pirates as one of the nation’s better teams. That’s where we’re going to start this Rauf Report.

Seton Hall is a top-15 team

I talked about how impressed I was with Seton Hall’s defense in the Rauf Report that recapped the first weekend of the season and were even more sold on the Pirates after they knocked off Michigan in Ann Arbor.

I had Seton Hall No. 14 in my top 25 this week, knowing the Pirates needed another signature win to validate themselves in the eyes of the nation. The victory over the Longhorns should solidify Seton Hall’s standing.

But Thursday’s performance showed that the Pirates do have enough offense to compete at that level. Jared Rhoden is a bona fide star who can create his own shot at all three levels and might be the early favorite for Big East Player of the Year. Throw in some late-game shot creation from Bryce Aiken, dominant offensive rebounders in Ike Obiagu and Tyrese Samuel and reliable 3-point threats.

Put all that together and you have a top-15 team that can reach the NCAA Tournament’s second weekend. Keep in mind, Seton Hall’s only loss came at the buzzer against Ohio State. The Pirates have consistently played at this level all year long and it’s time they got the respect they deserve.

Seton Hall and Rutgers face off on Sunday. That one looks a lot more enjoyable now, huh?

Arizona continued its torrid start with a 94-65 thumping of a previously undefeated Wyoming squad on Wednesday night, pushing the Wildcats to 8-0. Head coach Tommy Lloyd’s squad has been perhaps the biggest breakout team of the season’s opening month, going from unranked in the preseason to No. 11 in the AP poll. DPI, Haslametrics, KenPom and the NET rankings all have them ranked in the top 10.

The Wildcats have turned into a defensive juggernaut, using their elite size (second tallest team in the country) and length to dominate inside. They lead the country in interior defense and are top 10 in both block rate and adjusted defensive efficiency.

On the offensive end, they are also elite in important areas. Along with dominating the paint (third in interior shooting percentage), Arizona ranks second nationally in assist rate and is top 20 in effective field-goal percentage and adjusted offensive efficiency.

As ESPN researcher Jared Berson pointed out, Arizona’s dominance on both ends of the court puts them in elite company:

The only negative with this Wildcats team is that they’ve beaten up on relatively weak competition. They’ve only faced two teams that rank inside the KenPom top 110, one of which was an overtime victory against Wichita State with the other being the throttling of Michigan on national TV. While the UM victory put Arizona on the map, as we’ve seen, the Wolverines are far from the team we expected thus far.

Arizona is throttling the competition it has faced in the way you’d expect from an elite team, but the next month will tell us where this team is at. The Wildcats will face Illinois, Tennessee, UCLA and USC in their next six games, all of which come on the road. That stretch starts Saturday against an Illini team that has won five games in a row since being blown out by Cincinnati.

The biggest key to the turnaround for Illinois has been Alfonso Plummer’s insertion into the starting lineup. Andre Curbelo’s injury forced Brad Underwood to make the move and Plummer has emerged as the Illini’s most important player (other than Kofi Cockburn, of course).

Along with being 4-0 since putting him in the starting lineup, Illinois has posted a top 10 adjusted offensive efficiency. This has come against decent competition, too, as the Illini have knocked off Notre Dame, Rutgers and Iowa in their last three games.

Plummer’s performance against Kansas State — the victory that started this five-game win streak and the last one in which he came off the bench — set the tone for this turnaround. The Utah transfer hit seven 3-pointers in 23 minutes, enhancing what had been one of this team’s weaker areas. He is shooting nearly 49 percent from deep (23-of-47) during this five-game stretch, averaging 23.4 points per game.

Illinois is even turning to him in big moments, emerging as the late-game, go-to guy that has been needed in the post-Ayo Dosunmu era.

“I did [this] in high school and junior college,” Plummer told reporters after Illinois’ win over Iowa on Monday. “This is my first time in my career, NCAA Division I, doing that. I’m very proud of what I’m doing. My work ethic, I think, is helping.”

Illinois needs a healthy Curbelo to reach its full potential but someone like Plummer had to emerge for it to get there. As I wrote in a Rauf Report earlier this season, it was clear during the Illini’s slow start that Curbelo’s skillset isn’t conducive to carrying an offense via scoring. He’s a facilitator, and now that Plummer is carrying a significant portion of the scoring load on the perimeter, Curbelo can go back to doing what he does best.

If you watched the rock fight of a basketball game that was Tuesday’s Tennessee-Texas Tech matchup in the Jimmy V Classic, 1) I’m sorry, and 2) you likely left feeling better about the Red Raiders than you originally thought.

That might be a bit of a stretch considering it was impossible to leave that game feeling good about anything — eight minutes went by without a made basket from either team! — but I was encouraged by the effort Mark Adams’ squad put forth.

There was a huge question mark surrounding the entire Texas Tech program entering the season following Chris Beard’s departure for Texas. Adams was able to bring back some key pieces and landed a good deal of transfers, yet the roster still had some holes (no real point guard) and Adams had never been a head coach before.

Well, through eight games, we know this is still an elite defensive unit, which isn’t a huge surprise given that Adams was something of a defensive coordinator under Beard. The Red Raiders rank fifth nationally in adjusted defensive efficiency and force a turnover on over a quarter of all defensive possessions (13th). They’ve held four opponents below 60 points and two more — Grambling State and Incarnate Word — only got to 62 because the reserves were in during the latter stages.

Texas Tech’s offense did go into a complete shell in the second half against Tennessee but there are signs of improvement. Terrence Shannon has taken that next step to become the team’s unquestioned go-to guy while transfers Kevin Obanor (Oral Roberts) and Davion Warren (Hampton) have proven they can be consistent offensive threats at the power conference level.

This team is far from perfect — Tech also struggled in the second half in its loss to Providence — but the Big 12 is wide open behind Baylor, Kansas and Texas. It won’t always be pretty, but led by defense, Texas Tech is good enough to finish fourth in the nation’s best conference and is certainly good enough to make the NCAA Tournament (and potentially win a game). The questions about their ability to accomplish those things have already been answered.

Florida’s pace will determine its ceiling

Remember when Texas Southern upset Florida? That happened this week!

If you forgot or need a refresher, the Tigers went into Gainesville and got their first win of the season in a 69-54 victory that wasn’t even that close. Texas Southern dominated the glass, limited Florida’s 3-point shooting and got just about whatever it wanted around the basket.

Another big reason for the upset? Texas Southern succeeded in slowing the pace and making Florida execute its half-court offense, which is not a strength for the Gators.

Florida has ranked outside the nation’s top 200 in pace in three seasons under Mike White (2017-18 through 2019-20), and those seasons also happen to be the three seasons in which the Gators have suffered the most losses under White. He does a great job of assembling rosters with high-level athleticism, but when he slows them down, it takes that advantage away.

It appears White has recognized this and has this year’s team playing at the fastest tempo of any he’s had in Gainesville. Florida saw some early success because of it, knocking off Florida State and Ohio State in the process.

Texas Southern forced Florida to its slowest game of the season. It’s the only game this year in which the Gators — who average 72.1 possessions per game — did not get 70 possessions, ultimately finishing with 66.

Perhaps it’s relatively unsurprising that, in Florida’s next game, it played at its fastest tempo and scored more points than it had all season.

No one is going to mistake the Gators for Gonzaga or Memphis tempo-wise, but they’re playing closer to that than the Virginia-like pace White preferred a few years ago and sometimes reverts back to at times.

Florida has the talent to compete at the top of the SEC. Operating at a relatively fast pace will play a significant factor in whether this team can make that come to fruition.