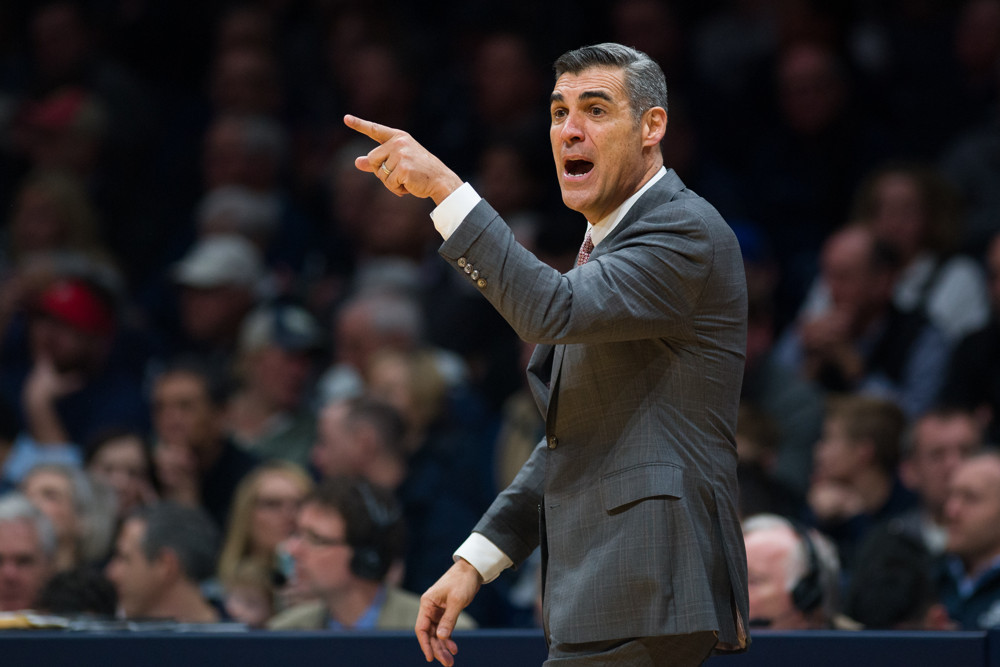 Brian Rauf reveals his biggest college basketball takeaways from the weekend, including looks at Villanova and Memphis, in a new Rauf Report.

We had a loaded college basketball slate this weekend. While there were moments that will be among the most memorable of the entire season, a number of takeaways from previous Rauf Report columns were reinforced.

Michigan’s offensive struggles continued in a loss to Minnesota. Colorado State is a really, really good team that deserves to be ranked (I have them in my top 15). St. Bonaventure’s 3-point struggles are an issue. Oh, and there’s going to be a revolving door at the top of the rankings.

We knew Purdue was going to fall from the No. 1 spot following its loss to Rutgers this week — and it nearly lost again on Sunday to NC State — but we didn’t know who was going to succeed them.

Baylor has emerged as the overwhelming favorite to do so following a 57-36 drubbing of Villanova in Waco. The defending national champions showed off an elite defense and a balanced offensive attack in the blowout, solidifying its place among the nation’s elite.

I will caution against having a love affair with this Bears team, however. It’s true we probably should’ve given Baylor more preseason respect considering it won a title eight months ago, and it’s true Baylor will deserve the No. 1 ranking it will receive on Monday.

It’s also true that many were this in love with and confident in Purdue this time last week. And in Duke two or three weeks ago. And in Gonzaga the weeks before that.

The Bears are a very, very good team with a stellar defense, but they are not perfect. Beating Villanova shouldn’t change your mind given what we already know about the Wildcats. This is where we’ll start today’s Rauf Report.

Villanova is not an elite team

Villanova is as tested as anyone through the season’s first month-plus, already having faced four teams that rank in the KenPom top 10. However, each of those games has indicated the same thing — these Wildcats are good, but they are limited and aren’t on the same level as the sport’s top teams.

Against both UCLA and Purdue, Villanova’s lack of depth and individual shot creators cost it down the stretch (something also discussed in a previous Rauf Report). Baylor’s defensive pressure and length took the Wildcats completely out of their offense, further showcasing Villanova’s lack of size and shot creation.

“Baylor is an outstanding defensive team, as physical, tough and quick as anybody we’ve played against and obviously, we really struggled scoring,” Jay Wright admitted to reporters after the loss to Baylor. “I give them credit for that, they did a good job. We didn’t do a bad job defensively, we just couldn’t score. They were just in us, physical, athletic, and quick, and we really struggled with it.”

Villanova has had the same issues pop up time and time again when it has faced elite competition. These weaknesses didn’t kill them against teams like Syracuse or Tennessee because the combination of Villanova’s system, extremely smart play and talent is enough to beat that level of competition. It’s a different story against the best of the best.

So, even though Villanova will still be a top-10 or top-15 team all season long and may very well win the Big East again (though Seton Hall may have something to say about that), know that the Wildcats have shown they likely won’t make a really long run in March.

The Penny Hardaway Experiment is probably over

There’s not much to really elaborate on here.

Memphis came into the season knowing this was a make-or-break Year 4 for Penny Hardaway. It was the second time he managed to land the nation’s top recruiting class with the Tigers and, famously, had yet to make the NCAA Tournament. But with notable returning players, quality transfers and that top recruiting class headlined by Emoni Bates and Jalen Duren, there were no excuses this season.

A four-game losing streak that includes losses to two bottom-half SEC teams and Murray State is a sign that things aren’t working.

Hardaway has already discussed his frustrations with the locker room and called the loss to Murray State a “low point” for him in his life.

“I’ve gone through plenty of adversity in my life,” Hardaway said after the game. “This is a low point for me besides my knee surgeries. Never saw this coming and I feel like it’s happening for a reason. Until we all bond together, this type of stuff can happen. Other teams to me seem closer. They’re having fun. They’re making plays. We’ll get there.”

I’m not so sure Memphis can get there. On top of the chemistry issues, the Tigers turn it over at an alarming rate (350th in turnover rate), foul at an alarming rate and give up a huge number of offensive rebounds. Those are the kind of on-court issues that have plagued Penny Hardaway’s teams throughout his tenure. That’s become something of their identity, a signal that those issues won’t improve and are rather an issue with Hardaway’s coaching.

At this point, Memphis is far from NCAA Tournament contention. It’s clear at this point that this experiment has not and will not deliver on the promise it showed early in Hardaway’s tenure (along with just about every offseason).

I don’t know if Hardaway makes it through the remainder of the season or not but it feels like a matter of time before he’s no longer on the sidelines for Memphis.

In defense of Kentucky

I wrote a week and a half ago about how bad Notre Dame has been this season. So, by default, Kentucky’s loss to the Irish on Saturday becomes a really bad loss.

The Wildcats are now 0-2 against KenPom top-100 teams this season, putting their legitimacy as a top-25 team in question. A number of doubts have been raised about them this weekend, and rightfully so.

That said, I believe that loss to the Irish is more fluky than a true sign of where Kentucky stands in the college basketball pecking order.

The Wildcats have a number of reliable 3-point shooters and that has become a larger part of their offensive attack this season. They had their worst 3-point shooting performance of the season against Notre Dame, going just 2-of-19 from long range.

That’s not something caused by the Irish, either. Mike Brey‘s squad ranks among the nation’s worst 3-point defenses and gave Kentucky plenty of open shots from beyond the arc. Kentucky simply missed a lot of open looks, which happens from time to time.

We’ll find out more about the Wildcats in short order. Kentucky faces Ohio State in Las Vegas on Saturday before facing Louisville on Dec. 22. Those two games will tell us plenty about John Calipari‘s squad.

Could the ACC be a three-bid league?

Speaking of Louisville, the ACC had another comically bad weekend. As the nonconference portion of the college basketball schedule starts to wind down, the conference is running out of opportunities to boost its reputation.

Right now, its reputation is the worst high-major league in the nation.

The aforementioned Cardinals lost at home to DePaul on Friday. Saturday saw Syracuse lose to a bad Georgetown team, Boston College being handled by Saint Louis, Georgia Tech not competing with LSU and Clemson needing overtime to beat Drake.

Sunday may have been worse as Florida State lost to South Carolina, Virginia Tech fell against Dayton and Miami only beat Fordham by six points while Pitt was the underdog — and lost — against Monmouth.

Duke is obviously an NCAA Tournament team as the Blue Devils are one of the favorites to win the national title. North Carolina has re-emerged as a solid top-25 team that figures to go dancing with ease, too.

But outside of that? Good luck finding an ACC team that feels confident in its nonconference resume.

According to Haslametrics’ “Bracketology Deserves,” which is designed to show NCAA Tournament projections based on current analytical ratings, there are only three ACC teams solidly in the field: Duke, UNC and Wake Forest. Two others, Louisville and Virginia Tech, are in the projected play-in games.

However, even those resumes have significant flaws. Virginia Tech’s only KenPom top-120 win is over a Maryland team that fired its coach.

Wake Forest’s only such wins are against those Hokies and a Northwestern team picked to finish near the bottom of the Big Ten.

Louisville has the best win (Mississippi State) and the two worst losses of the three (Furman and DePaul).

The bottom line is that the ACC has been terrible. Only two teams have proven they can consistently play at a high level. Three bids would be extremely low for a conference that has as much prestige as the ACC, even if it may not be extremely likely for no other teams to emerge.

But a three-bid total is in play, which would’ve been ludicrous to believe five years ago about one of college basketball’s top conferences.

Remember when BYU looked like a legitimate top-10 team just a few weeks ago only for them to lose to Utah Valley and then be blown out by Creighton over the weekend? What happened?

Well, the Cougars didn’t have one of their most important players in Gavin Baxter. They won’t have him for the foreseeable future, either.

Baxter had emerged as a key contributor for Mark Pope‘s squad during the season’s first six games as he was the only rotation player who stood 6-9 or taller. He was the main source of rim protection and offensive interior presence during BYU’s stellar 6-0 start.

Unfortunately, he tore his ACL just minutes into the game against Utah Valley and will miss the remainder of the season.

That injury was doubly important because of what happened before the season even got started with Richard Harward. The center was hurt in BYU’s exhibition game and has yet to play this season due to a cardiovascular issue.

Both players were expected to play significant roles along BYU’s front line. Now, Pope is having to scramble and reshape how he imagined this Cougars team was going to be able to play. Early returns indicate that what could’ve been a phenomenal season is quickly going by the wayside.

BYU does have a chance to get right as its next five games all come against far inferior competition. That leads into a three-game stretch in mid-January in which the Cougars will face Saint Mary’s, Gonzaga and San Francisco in a 7-day span with the latter two contests coming on the road.

We may not get our answer on what this version of BYU can be until then but, unfortunately, injuries may prevent the Cougars from a special season.