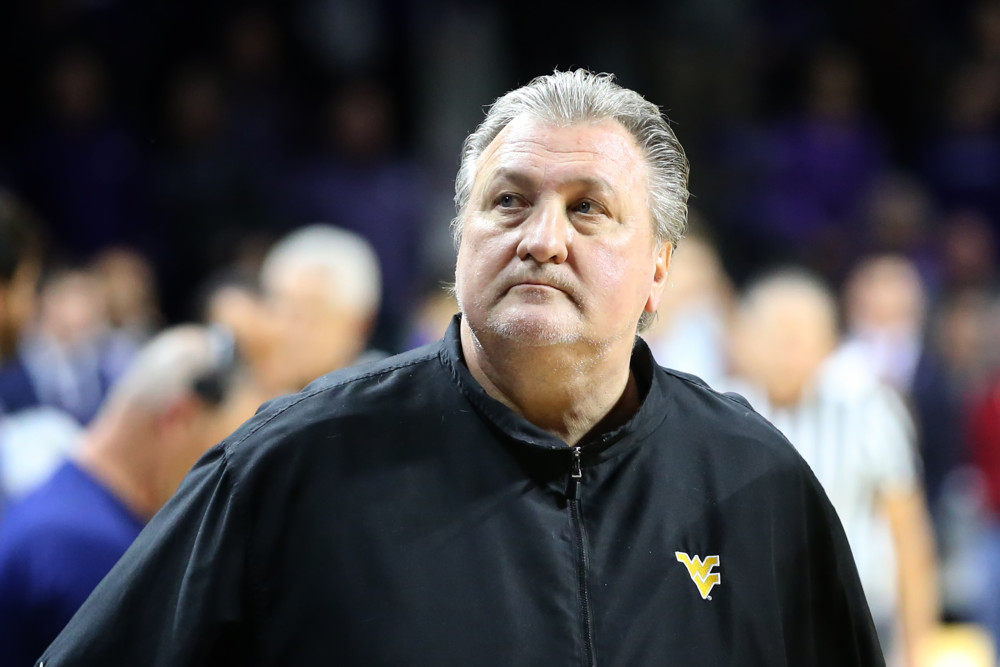 Welcome into a brand new Rauf Report, where I highlight my biggest takeaways from the past week in college basketball.

We’re into the heart of conference play in the first full week of the new calendar year and, while we don’t have weekly showdowns between elite teams like the nonconference schedule, we are getting more contested matchups. These matchups have helped sort out the true elite teams from the rest.

Transfers have become a bigger part of the college game in recent years, but this is the first time I can remember this many marquee players opting to leave their respective schools midseason, and all in the same week, no less.

Tshiebwe’s decision, in particular, was surprising because he was a major part of West Virginia’s bruising, two-big identity. However, Bob Huggins has made an adjustment that, through two games, looks like it may keep the Mountaineers among the nation’s best teams. That is where we start this week’s Rauf Report.

West Virginia’s small lineup is the key to its season

West Virginia found success last season and the first part of this season by dominating teams down low thanks to Tshiebwe and Derek Culver. Those two formed one of the nation’s best big man duos and were the team’s most reliable pieces.

As I wrote about several times this offseason and early this year, WVU went as its guards went because the Mountaineers already had consistent frontcourt production. Considering poor perimeter play was the leading factor behind its late-season struggles a year ago, it was natural to be skeptical about this team’s ceiling without its former blue-chip prospect.

That was especially true when it trailed Oklahoma by 18 at halftime of the Mountaineers’ first game after Tshiebwe left the team.

West Virginia then stopped forcing a big lineup and went against its identity by going small, which worked. With only one true big on the floor (Culver most of the time), the Mountaineers roared back to tie the game. Taz Sherman played a larger role and wings Jalen Bridges and Emmitt Matthews had more space to operate. The Sooners ended up winning the game, though, as the comeback took too much out of WVU.

The same thing happened on Monday night against Oklahoma State. West Virginia started the game with a bigger, more traditional lineup and found itself down 19 points in the second half. Needing points, Huggins adjusted again by going small and, once again, the Mountaineers erased the deficit — this time holding on for the win with Miles McBride leading the way.

This is going to be how West Virginia should play all the time moving forward. Its rotation is simply more guard-heavy now and it increases the shooting percentages with more spacing. Huggins has proven he can win this way, too — the West Virginia team that made the Final Four in 2010 was 3-point centric. I don’t think this team has that kind of ceiling without Tshiebwe, but it has already proven to be the best chance at remaining competitive.

I was flabbergasted when Michigan State was ranked No. 23 in this week’s AP poll. This was on the heels of a three-game losing streak (ended with narrow win over Nebraska) in which the Spartans were easily handled by Northwestern, Wisconsin, and Minnesota.

This Michigan State team is talented yet had a number of problems, including some major ones on the offensive end that I wrote about last week.

That said, Michigan State picked up perhaps its biggest win of the season on Tuesday in a 68-45 blowout of Rutgers because of a defensive adjustment.

The Scarlet Knights are a really good three-point shooting team, ranking in the top 30 nationally in three-point percentage. Ron Harper Jr., their best player, is lethal from behind the arc and two other players (Jacob Young, Montez Mathis) shoot over 41 percent from deep.

To defend against this, Michigan State didn’t help. They played straight up man-to-man defense throughout the night, opting to stay on shooters and eliminate three-point opportunities in favor of occasionally allowing drives to the basket.

In the picture below, Young is driving on Michigan State guard Foster Loyer and beat him to the lane. Instead of helping to defend the drive, Joshua Langford and Malik Hall stay on their respective mark on the perimeter. The result was a contested floater that Young missed.

As a result, Rutgers had their lowest scoring output and worst shooting performance of the season. Not bad for a defense that was the worst in the conference in opponent three-point percentage, right?

This was a gameplan change to stop a strength of Rutgers, but it was also a systematic change that eliminated one big weakness of this team: over-helping.

In the first 10 games of the season leading into Tuesday night, Michigan State’s defense would often give teams wide open shots because they went too far in their rotations.

Look at this play against Detroit Mercy. The ball gets into the paint and the Spartans rotate down to double. But there’s also a cutter there and another man sagging off a non-shooter, so they end up with four players within two feet of the ball. One of them, Rocket Watts, is leaving a shooter wide open behind the arc. As you might expect, he hit the shot.

Here’s another example against Duke earlier this year. Wendell Moore is driving, and all five Michigan State players are looking at the ball. The defender on the wing steps to the top of the key to cut off the drive, which he succeeds in doing. However, DJ Steward is cutting behind him and was wide open at the basket.

This subtle adjustment erased many defensive breakdowns and routinely forced Rutgers to take contested shots. Even if Tom Izzo only planned on using that strategy against the Scarlet Knights, their performance should warrant this being a permanent tweak. Keep an eye on this in the coming weeks.

Another great defense that doesn’t get enough credit is Tulsa, and its defense has helped lead towards a first-place spot in the American for a second consecutive season.

The Golden Hurricane got off to a slow start, losing three of their first four games to begin the season, but have ripped off six consecutive wins since, including victories over Memphis and Houston. Frank Haith’s squad has accomplished this by ramping up their aggression on defense, helping create turnovers and force low-percentage shots.

We’re going to use two examples from the Houston game to show this transformation.

Tulsa is in its 2-3 zone below, and the alignment already gives it a different vibe. Many times, zones are played to slow the game down or pack the lane against a poor shooting team. Tulsa does want to slow the game down, but it’s because they want to make their opponents work.

Tulsa’s zone is pressed up on the perimeter with the bottom of the zone being in the middle of the lane instead of around the basket. Houston has to run its offense further up the paint as a result. Tulsa is also tight on the ball, tight on the shooter in the near corner, and sagging in the paint to discourage penetration. If Houston swings the ball to the other side, the Golden Hurricane are able to quickly flip this alignment. DeJon Jarreau tries to pass it to the middle of the zone on this play — typically the weak spot of a 2-3 zone — but Tulsa’s high positioning and pressure allows them to steal this pass.

When Tulsa switches out to man defense or has to play in transition, the principles are the same: pressure the ball, contest the shot, and off-ball defenders sag to the paint to discourage drives.

It has been hard to argue with the results. Tulsa boasts a top 30 defense that is 13th in effective field-goal percentage defense and top 50 in turnovers forced. That’s an improvement over last season’s 34th-ranked defense that led to a share of the AAC title.

This strategy does have its weaknesses. For instance, it’s more difficult to rebound when you play zone and Tulsa ranks 302nd in defensive rebounding rate. But they’re good enough everywhere else that we should see this group in the NCAA Tournament for the first time since 2016.

Alabama is starting to round into form

Alabama was a popular pick to have a breakout season in the SEC because of the backcourt talent Nate Oaks was able to assemble in his second season in Tuscaloosa. The Crimson Tide didn’t look the part for the first month of the season but have improved mightily since being upset by Western Kentucky on Dec. 19.

Alabama has gone 4-0 in this stretch that has been capped by resounding victories over Tennessee and Florida this week.

The win over Tennessee, in particular, was a statement victory. The Vols were undefeated and looked like a team that belonged in college basketball’s top tier right behind Gonzaga and Baylor. But, thanks to its guard-heavy lineups and offensive capabilities, Alabama succeeded by putting all five players on the perimeter to space Tennessee’s defense out and attacking the empty paint.

The Crimson Tide had similar success against Florida’s typically sound defense. They spaced the floor and got into the paint, which resulted in quality shots around the rim or kick outs for open threes. In those two games combined, Alabama shot 18-40 (45 percent) from three as a team.

Tempo and spacing have played a big role in these results, too. When Alabama has scored at least 80 points, they’re 7-0. When they haven’t, they’re just 1-3.

Luckily, this squad appears to have found its rhythm in this up-tempo, five-out offense and is playing at an extremely high level. Alabama fans are more focused on Monday’s college football national title game, but this group is providing plenty of excitement on the basketball court as well.

Inflated Oregon and the Pac-12

Dana Altman’s squad has continued to rise up the rankings (up to No. 17 from No. 21 last week) thanks to winning against a softer schedule while other teams ranked ahead of them lost. They faced Colorado on Thursday, the first KenPom top 40 team they’ve faced this season, and lost fairly convincingly. Colorado isn’t exactly a juggernaut, either, with only two wins against KenPom top 120 teams.

Oregon will likely still be ranked next week (unless it loses to Utah on Saturday), but a steep drop could be in order given the lack of quality wins. The Pac-12 needs the Ducks stay ranked as well because the conference’s next highest team, Arizona, lost by 14 at home to USC on Thursday.

Struggles are nothing new for the Pac-12, which is routinely sending the fewest teams to the NCAA Tournament of any power conference. This season was supposed to be different for the conference with six or seven teams entering the year with tournament aspirations. Instead, it looks like we’re back to the three or four middling bids the conference has sent each of the last few years.

We will continue to see teams like Oregon, Colorado, or USC potentially rise in the top 25 because they’re winning, but those will simply be inflated records against the lesser competition in the conference.

There is no great team in the Pac-12. It doesn’t look like there’s even a really good team in the league. There are some fringe top 25 teams, but that’s the extent of it.

Expect this to be another season without a Pac-12 team in the Sweet 16.