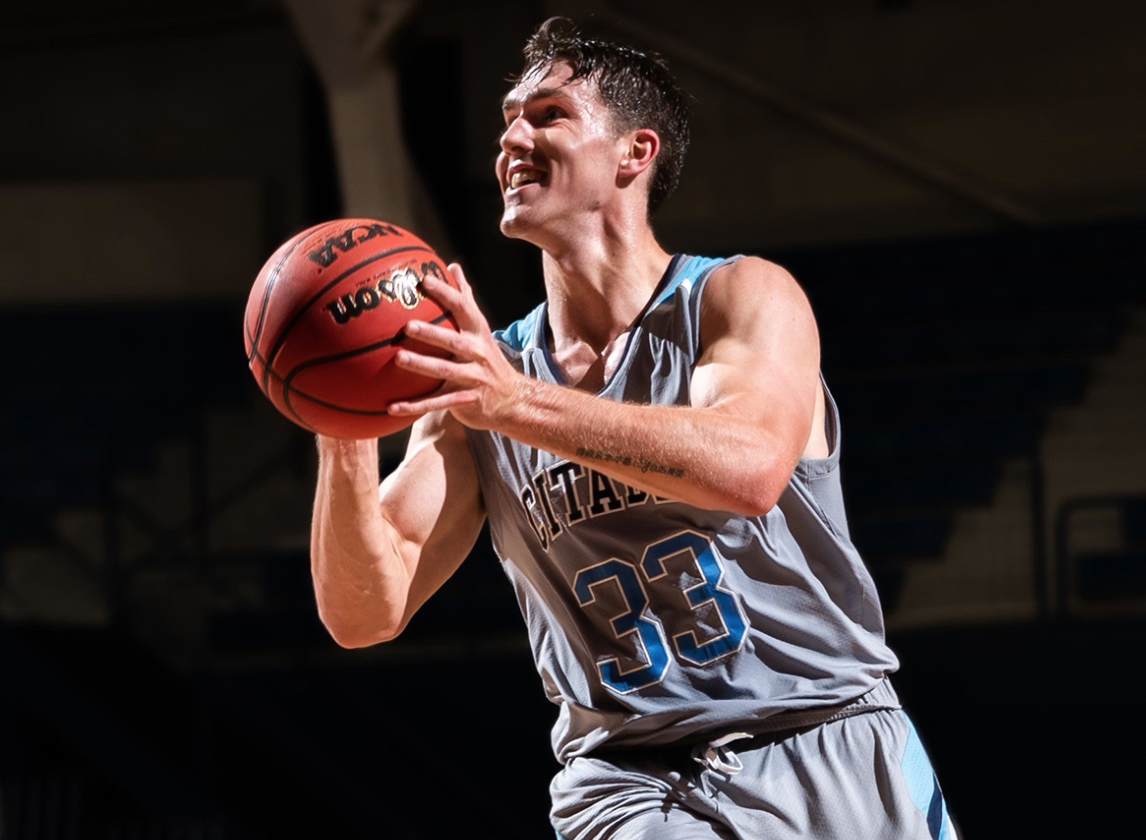 Analyzing The Citadel’s Hayden Brown, who is one of college basketball’s most productive players.

While Brown’s Citadel team finished 5-11 in the Southern Conference, good for eight overall, it was Brown who was voted a consensus 1st Team All-League performer.

Let’s take a look at Brown’s 2020-21 season, and why you need to start paying attention to him right now.

Brown is among special company

To say Brown had a special year last season would be an understatement. He led the Southern Conference in scoring, rebounding, and double doubles, while breaking the school record for most defensive rebounds in a season despite the COVID-shortened schedule.

Looking at the historical context of Brown’s season, he was the only player in all of Div. 1 last season who averaged over 18.5 points, 10.4 rebounds, and 2.5 assists per game. He was the first player since 2018-19 when Dylan Windler — 26th pick of the 2019 NBA Draft — did so and one of only 12 players total to do so in the last 30 years. Other household names who put up numbers in this range include the likes of Tim Duncan (twice), Ben Simmons, Jason Thompson, David West, and the previously mentioned Dylan Windler.

Last season Brown, a two-time SoCon Player of the Week recipient, recorded the first 30-point, 20-rebound game in Citadel history. On Dec. 7, he finished with 31 points and set a school record with 21 rebounds against Columbia International University. A little over a month later, Brown set his career high in points with 37 against Chattanooga on Jan. 9. &nbsp;

How did Brown get here?

Heading into his senior season at Duncan Byrnes (S.C.), Brown had amassed a 45-8 record in high school. He had been named the South Carolina 4A state player of the year and led his school to its first-ever state championship after averaging 14 points, six rebounds, and three assists on the season.

Coming out of high school, Brown was a very lightly recruited prospect despite the winning pedigree he had shown in the state’s largest classification. Brown only received two Div. 1 offers from Presbyterian and The Citadel. He visited both programs and chose The Citadel later saying, “I love Charleston, but I also chose to come here because of the family atmosphere shown by the team and coaches.”

What does Brown bring to the table?

While Hayden Brown can score the ball from each level of the floor, he is most lethal attacking inside of the 3-point arc. Of his 313 field-goal attempts last season, 222 of them came from 2-point range, where he finished at a 59.9-percent clip. Brown was only one of two players in the Southern Conference to finish with a 2-point field-goal percentage that high, having attempted 200 or more two-point shots on the season.

Brown is a high-IQ player; he is a smart cutter off the ball and is able to attack the defense from different areas on the floor. Brown’s 152 free-throw attempts — shooting 70.4-percent from the line — led the Southern Conference by a wide margin. And while most of Brown’s damage was done inside the arc, Brown also averaged 1.1 made threes per game.

Not only is Brown an adept scorer, he is also a prolific rebounder. Brown led the SoCon in rebounding at 10.5 per game which also placed him eighth overall in Div. 1. Where Brown thrives is clearing the boards to end defensive possessions; he finished fourth nationally with 8.2 defensive rebounds per contest. Brown’s 27.7 defensive rebounding percentage landed him second nationally among players who played 24 or more games.

Brown does not have tunnel vision when he is attacking the basket. As he was the only player in Div. 1 basketball to average 18 or more points and 10 or more rebounds who dished out 2.5 or more assists per game. While attacking the paint with a purpose, his head does not go down. The forward finished 15th in the SoCon in assist percentage at 17.9.

As his previously mentioned numbers would suggest, Brown is an analytics darling. He finished fourth in the Southern Conference in Player Efficiency Rating at 26.4 and third in the conference in Win Shares at 3.7. His play elevates his entire team, and The Citadel’s 13 wins last season were the most the team had in over a decade.

Five other SoCon players to watch