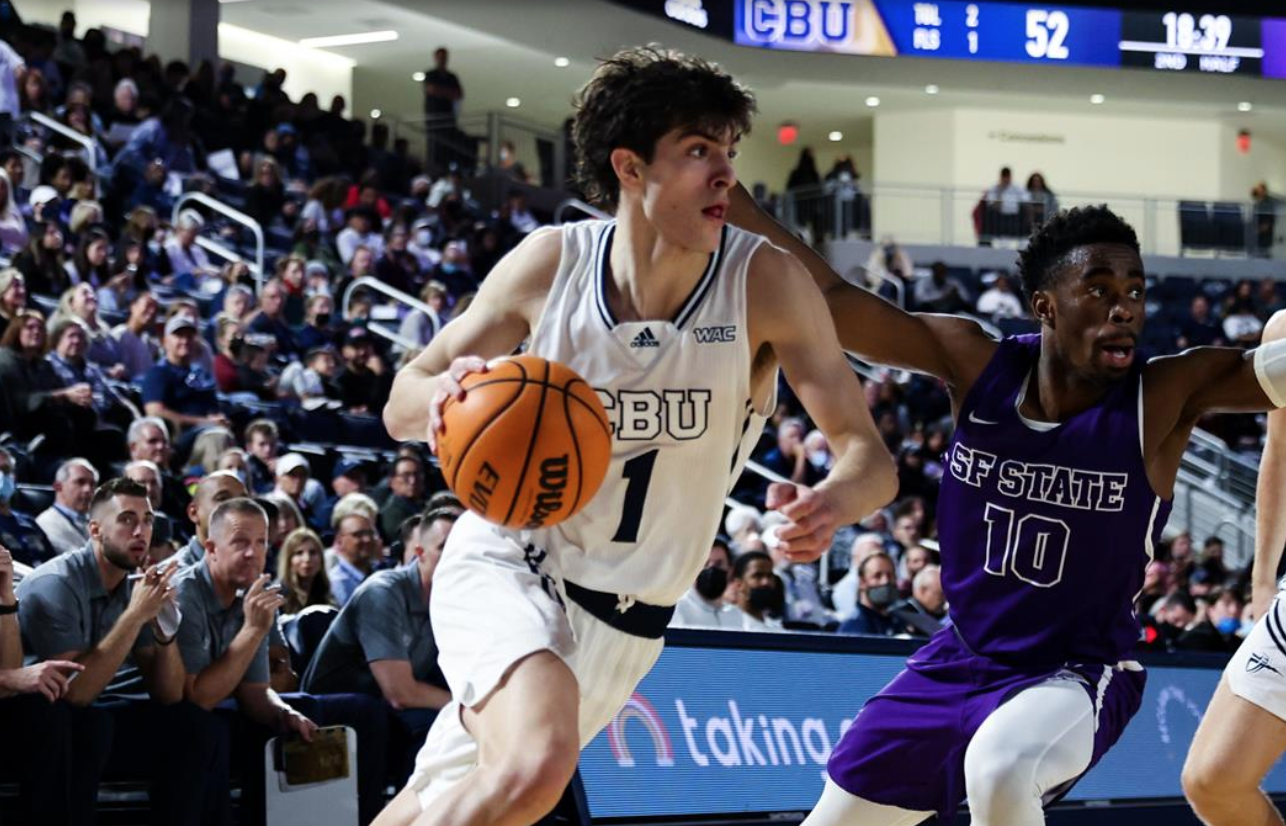 The Best Around: Nation-leading stats from around college basketball

There are hidden gems all around the college basketball landscape — all you need to do is look.

One of the familiar laments of anyone trying to follow college basketball is that there are simply too many teams. While most pro leagues don’t even have 32 teams, the NCAA Division I basketball landscape consists of 32 leagues. And they aren’t split into separate subdivisions like in football.

All of that is to say: it’s easy to miss stuff. Thankfully, there is an abundance of statistical repositories hidden all over the web — and internet sleuths like myself who are eager to find patterns in the data they store. Patterns help tell a story quickly, and when trying to get the broad view on 358 teams, time is always of the essence.

In that spirit, here are 32 quick statistical stories — one for each conference — as told from the pattern department here at Heat Check CBB. Some of them are vital to your understanding of the season, while others are just quirky or fun. Either way, you’ll have plenty of material for the water cooler.

Note: Statistics and rankings referenced come from Sports-Reference, KenPom and BartTorvik, and they are current through games played on Sunday, Feb. 7.

The Catamounts have yet to stumble in America East play, and one reason is because they are limiting second chances better than anybody in the country. Isaiah Powell and Ryan Davis are the main drivers behind this stat, but just about everybody crashes the defensive glass to John Becker’s delight.

Despite losing a few of its main cogs to injury, the Cougars’ defense remains as staunch as ever. They stop opponents from everywhere but the free throw line, ranking in the top 10 for both 2-point and 3-point defense. Nobody else in the country can claim even a top-20 ranking in both categories.

While Richmond teammate Jacob Gilyard gets a ton of pub for all the turnovers he forces, Nick Sherod is valuable for the turnovers he doesn’t commit. While the 3s may not always fall for the Spiders’ voluminous bench shooter, the senior rarely makes mental mistakes that cost his team possession.

Who’s surprised at this one? Tony Bennett has built a monument of patience in Charlottesville, asking his offense to take their sweet, sweet time with every touch of the ball. The Cavaliers won a title behind this approach, but the wins have dried up since then — and so has the hype around Virginia.

Need a mid-range shot? You could do far worse than Bellarmine’s Dylan Penn, who has hit more far 2-pointers than any other player in America, according to Bart Torvik’s website. Penn has been a major part of why the Knights might start off their Division I existence with back-to-back winning seasons.

There are only two players in the country whose offensive rebound rate sits higher than 20.0 percent: McCormack and Purdue’s Zach Edey. The Jayhawk big man was a top-50-ish player on the offensive glass last year, but he has nearly doubled his productivity in this particular department.

The Wildcats are crushing the competition when it comes to free throw shooting, though they aren’t the most frequent visitors to the stripe. Still, Villanova’s 83.3 percent accuracy rate is more than two points higher than the next best team. Collin Gillespie (91.2 percent on 68 attempts) leads the way here.

The Wildcats don’t have any 7-footers in tow, but they boast a sizable lineup from 1 to 5. The smallest players in the main rotation are Seikou Sisoho Jawara (6-3, 210 lbs.) and Koby McEwen (6-4, 195 lbs.), and both players are mid-range mavens who can dig themselves out of trouble on the interior.

Somebody on Winthrop had to take over for Chandler Vaudrin, right? DJ Burns was always the likely candidate for those honors, and the Eagles’ big boy is going back for seconds (and thirds) every single night. Burns is one of only two big men who rank in the top 10 for shot rate, with Wyoming’ Graham Ike being the other.

Even after a few subpar games from an efficiency standpoint, it’s impressive that Murray is still the top player in this department. Iowa needs him to stay there, too. The Hawkeyes are a perfect 13-0 when Murray logs an offensive rating over 120 — when he doesn’t (or doesn’t play), Iowa is just 2-7.

With the exception of Justin Edler-Davis, the Roadrunners don’t really have any threats from downtown. For that reason, nobody scores a higher share of their points off 2-pointers. The problem is that most of them (43.3 percent) are mid-range shots, and Bakersfield shoots a paltry 37 percent on the middies.

Coaches around the Colonial ought to be teaching their teams to stop fouling Estrada, as the Hofstra senior is simply automatic from the line. His 95.1 percent conversion rate on free throws is even more impressive when you consider that he leads the team in attempts at the stripe this season.

This one is notable for a couple reasons. First, the Hilltoppers are hemorrhaging points on the outside, so a low free throw rate mitigates those points to some degree. Past that, it’s impressive that the owner of the nation’s second-leading block rate, Jamarion Sharp, patrols the paint so well without fouling.

Don’t expect to get easy shots on the outside against Luke Yaklich, as UIC allows teams a smaller proportion of points from 3s than any other team. The Flames smother shooters with fiery close-outs, as evidenced by holding Detroit’s Antoine Davis to a season-low six 3-point attempts back on Jan. 27.

After helping the Big Red to a solid nonconference season thanks to his skillful shooting, Boothby has had a spot in the Cornell starting lineup since Dec. 29. He does almost all of his work on the outside, where he shoots a blistering 48.7 percent on 3-pointers. He’s also 92.9 percent from the line.

While some players might get to the line more often, nobody in the country makes it their home quite like Nikkei Rutty does. With 44 free throw attempts compared to just 38 field goal attempts, Rutty is currently the only qualifying player in the country with a free throw rate over 100.

David Skogman doesn’t shoot as much as some folks, but the guy simply doesn’t miss. Skogman is shooting just a hair under 80 percent on his 2-pointers, missing just nine all season long. The Bulls’ sophomore is also deadly from deep, hitting 43.6 percent of his 39 3-point attempts.

Thanks to the fast-paced foursome of Morgan State (No. 6 adjusted tempo nationally), Coppin State (No. 11), South Carolina State (No. 34) and Howard (No. 37), there isn’t a faster-moving league in Division I. Sadly, the MEAC ranks dead-last in offensive efficiency — so there’s not a more fruitless one, either.

In a late-game situation where you need someone to give a foul? Look for Anderson because chances are, he still has plenty to give. Despite playing 27.2 minutes per game over 19 contests, the Wisconsin transfer has only committed nine fouls all year long — and never more than one in a single game.

As mentioned in the discussion of DJ Burns’ shot rate, Ike is one of the most frequently featured big men in the country. The Wyoming sophomore also leads the country in fouls drawn per 40 minutes, and his contributions on offense have turned the Cowboys into a serious contender to win the Mountain West.

Six of the 10 teams in the NEC rank in the top 130 for offensive rebound rate, including two top-50 outfits in Wagner and Bryant — the same two teams at the top of the conference race. One potential explanation for all the offensive boards? The NEC misses more free throws than any other league.

The Ohio Valley is home to two of the best teams in the nation when it comes to prioritizing ball movement, as Belmont and Morehead State each rank in the top 10 for assisted field goal rate. Three other OVC squads — Austin Peay, Eastern Illinois and Tennessee Tech — rank in the top 100. This is not the place for hero ball.

Thanks to imposing shot-blockers like Christian Koloko and Oumar Ballo and strong defenders on the wings, the Wildcats are the only team in the country forcing opponents to take mid-range shots at a rate higher than 35 percent (37.4) while also holding teams under 30 percent on those shots (29.8). Nobody defends 2s better.

The Ohio Valley might be the league most dedicated to assists, but the Leopards take the cake on an individual basis. That is thanks in large part — pun intended — to 7-footer Neal Quinn, the only player in the nation with an assist rate over 30 percent and a block rate over 5 percent.

Shooter U is back in session, with VMI taking 3s at a rate not seen since the earliest days of Duggar Baucom leading the Keydets. More than 54 percent of the team’s shots come from beyond the arc — and the last time they did that, VMI won 24 games and made it to the 2008 SoCon Tournament final.

For as much press as Kessler gets for his block parties — and they are a sight to behold — he is also something of an accomplished pickpocket. Of the 13 players in the country with a block rate over 12.5 percent, Kessler has the highest steal rate at 2.5 percent. Nobody has a better “stock” portfolio.

The free throw line has been the Privateers’ port of call all year long, with Troy Green leading the way thanks to his 23rd-ranked free throw rate and Derek St. Hilaire also being a frequent visitor. They are the only pair of teammates nationwide shooting over 80 percent on at least 150 free throw attempts each.

MJ Randolph has seen an increase in minutes per game in each of his four seasons at Florida A&M, but the Rattlers are running out of room to grow here. Randolph is currently logging 38.5 minutes for FAMU, narrowly edging out Jalen Moore of Oakland (and basically the entire St. Bonaventure starting five).

South Dakota State is hitting 3s at a rate (43.3 percent) that has only been done by five other teams in the past 20 seasons. One of those teams was 2010 Cornell, a squad that won 29 games and made the Sweet 16 as a 12-seed. That’s an encouraging data point for Eric Henderson and the Jackrabbits.

OK, full disclosure: it was surprisingly hard to find something for the Sun Belt. One thing that does stick out is the UT Arlington is tied with Valparaiso for the most overtime periods played this season (UTA got there first). The Mavericks have gone seven extra frames this season, including a 3OT loss to Little Rock on Jan. 22.

Thanks to having the best 2-point percentage in the country, the Zags also boast the top effective field goal rate. Gonzaga’s EFG mark currently sits at 60.6, a number that has only been registered once in the past 20 seasons. The only team to post a season-long rate higher than that? Last year’s Gonzaga team.

The Tasmanian Devil took the college hoops world by storm early on with his eye-popping assists, but he has faded from the zeitgeist to some regard after missing most of January with an undisclosed injury. When healthy and on the court, he is assisting on 47.6 percent, or nearly half, of Cal Baptist’s field goals.