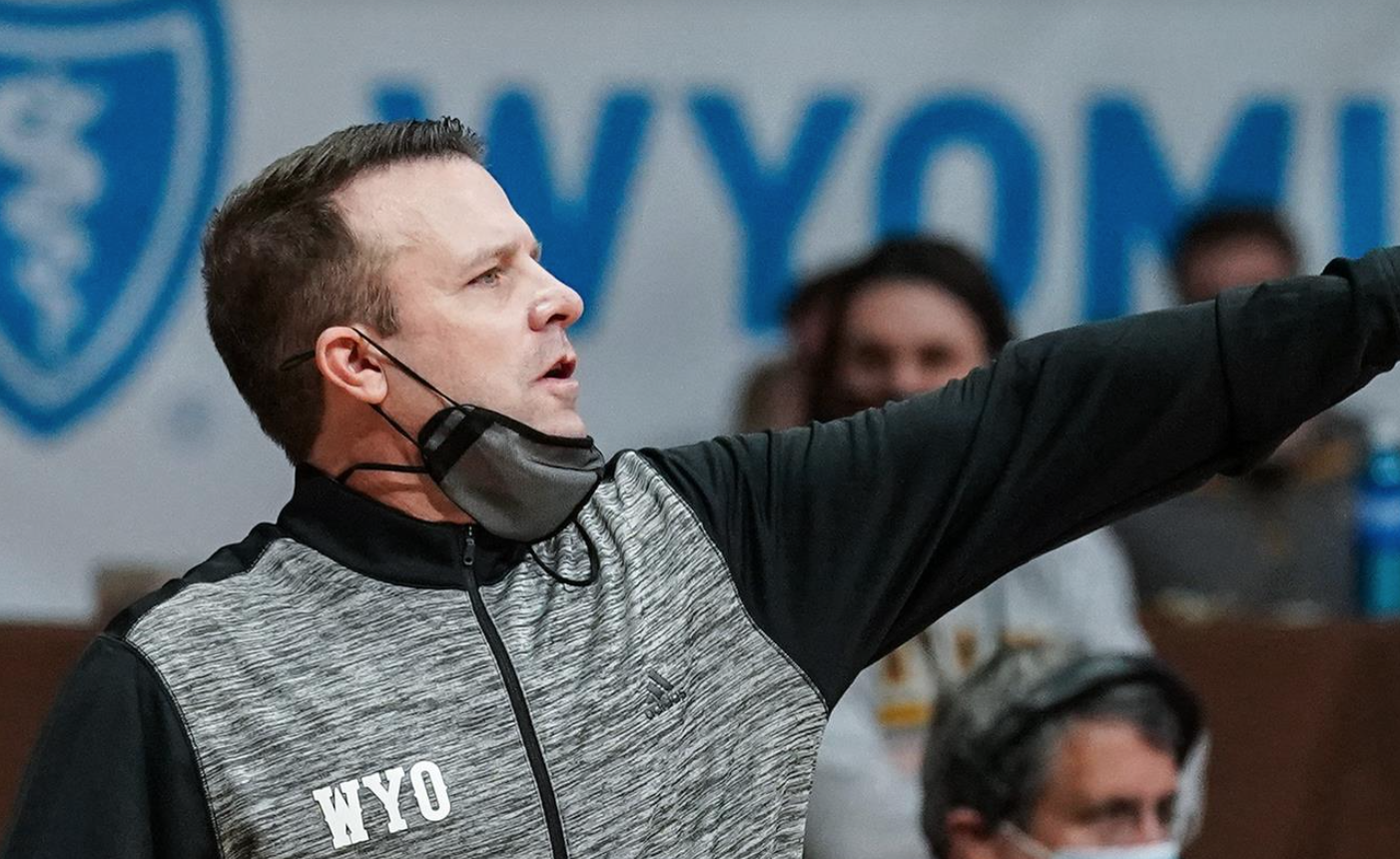 Jeff Linder and the Wyoming Cowboys have been one of college basketball’s biggest surprises during the 2021-22 season.

At this point in his career, Jeff Linder is no stranger to a rebuild.

After a “good-not-great” Division-II playing career and several years as a D-II assistant, Linder — who has led Wyoming to a 19-3 record in just his second season in Laramie — is quick to remember the more humbling days.

“I came up the hard way,” Linder told Heat Check CBB on All-Access Network. “I’ve had to earn everything I’ve gotten and that starts with being at the Division-II level, the junior college level, and the lower levels of Division-I where you don’t have the best job and have to find ways to try to see things that other people don’t see.”

Whether as a 24-year-old assistant at D-II Emporia State or head coach at the program-rich University of Wyoming, Linder’s blue-collar mentality hasn’t altered.

“I know what it’s like to have two kids, make $25,000 a year and use Subway stamps so we can save a few dollars here and there, and those are the guys that ultimately make it.”

Linder became Northern Colorado’s head coach in 2016, his first-ever head-coaching position at any level. The UNC program needed a spark following the firing of B.J. Hill and off-court violations that led to program probation, a postseason ban and seven show-cause orders.

By Year 2, Northern Colorado set a school-record for wins (26) and captured the 2018 CollegeInsider.com Tournament championship. The Bears were picked seventh in the preseason Big Sky poll that year and Linder’s group shattered expectations.

Fast forward to October 2021, Linder’s Cowboys were slotted eighth in the Mountain West poll in his second year with the Pokes. Once again, Linder is guiding another fruitful Year 2 with Wyoming off to its best conference start in 20 years.

The secret? There really isn’t one.

“The secret is we show up every day and work. We don’t have any days off and that goes from 1 through 15. We recruit guys that don’t want to take days off.

“We’re doing a lot of things that other teams just don’t want to do every day and that’s our whole process.”

The Cowboys are led by the highest scoring duo in America in Graham Ike (20 ppg) and Hunter Maldonado (19.3 ppg). The 6-9, 250-pound Ike was almost entirely overlooked by high-major programs while Maldonado, a 6-7, 200-pound point forward, was seen as a fringe D-I player capable of garnering “college interest” according to ESPN.

“I knew how special Graham was,” Linder said about his star big man who played in 12 games last year as a freshman. “For him not to be able to do anything for basically a year … and for him to jump in the middle of January and do what he did, I knew he was going to take a big, big jump to be one of the best bigs in the country.”

Ike is one of only four players in college basketball this season averaging 20 points and eight rebounds a game, the others being All-American candidates Keegan Murray (Iowa), Kofi Cockburn (Illinois) and Johnny Davis (Wisconsin). He also leads the entire nation in usage rate and fouls drawn per 40 minutes, proving to be a game-changing mismatch in the post.

Maldonado, meanwhile, overcame a season-ending injury in 2019, a combined 17-48 record the next two seasons and a coaching change to get to this point. In Wyoming’s recent 10-1 stretch, Maldonado is averaging 21.5 points, 7.3 assists and 5.7 rebounds per game. His 35-point outburst helped hold off Colorado State in a thrilling, overtime Border War victory on Jan. 31 in front of a packed Arena Auditorium, a sight even the most loyal Pokes fans couldn’t have envisioned just two years ago.

“Maldonado bleeds brown and gold and he wants to leave a legacy here at the University of Wyoming,” Linder said.

When Maldonado and his teammates Hunter Thompson and Kenny Foster had every reason to skip town in 2020 amid a losing skid, coaching change and pandemic, they stayed put.

“I had to go and convince them (to stay) because they didn’t owe me anything or know me,” Linder said about keeping the trio when he took over the Wyoming program. “I had to hopefully have them trust me that the vision I had for them individually and us as a program could convince them to stay.”

With Wyoming experiencing a dramatic turnaround that has the Cowboys up to 30th in NET and a projected 9-seed, Linder’s vision is certainly paying off.

The supporting cast around Ike and Maldonado is no slouch, either. Across the board, the Pokes have as much size as any team in the country. Maldonado, 6-7, runs the offense with 6-5 Drake Jeffries (.442 3P%) and 6-7 Brendan Wenzel (.387 3P%) capable of stretching the floor around Ike, who Linder says owns a 7-5 wingspan.

Other key rotational pieces include steady 6-4 ballhandler Xavier DuSell (8.9 ppg) and a slashing 6-8 Jeremiah Oden, who ranks seventh in college basketball in 2-point percentage at 72.6 percent.

It all comes together into one cohesive unit that features Maldonado and Ike prominently but receives timely contributions from others. Having lost leading scorer and MWC Freshman of the Year guard Marcus Williams to Texas A&M in the spring, Linder has made the most of the team’s returning pieces.

“Ultimately, you have to change the way you play based off your personnel and put your players in the best situations possible.”

The return of the ‘Dome of Doom’

One of the primary reasons for Wyoming’s breakout this season is a massive improvement on the defensive end. The Cowboys were a lowly 301st in adjusted defensive efficiency on KenPom in Linder’s first year. This season, the Pokes are all the way up to 94th. In wins over Utah State, Boise State and Fresno State, Wyoming allowed just 64.3 points per game. It also forced Colorado State to its fourth-worst offensive performance of the season by efficiency standards.

With one of the country’s best offensive duos and a lengthy, disrupting defense to match, it’s no wonder the Arena Auditorium’s “Dome of Doom” moniker is back in full force.

“Having grown up in the north suburbs of Denver and following the Cowboys growing up … I remember the support the University of Wyoming got,” Linder said. “There’s a certain pride and passion that goes with the Pokes.”

But even with Wyoming up to 26th in AP Top 25 votes and an NCAA Tournament berth and Mountain West title in reach, Linder remains focused on taking everything a day at a time.

“There are just no nights off. Every game is a grind.”

The grind has led Wyoming to a memorable season that no one anticipated.

Check out the full interview with Linder on All-Access Network right here: