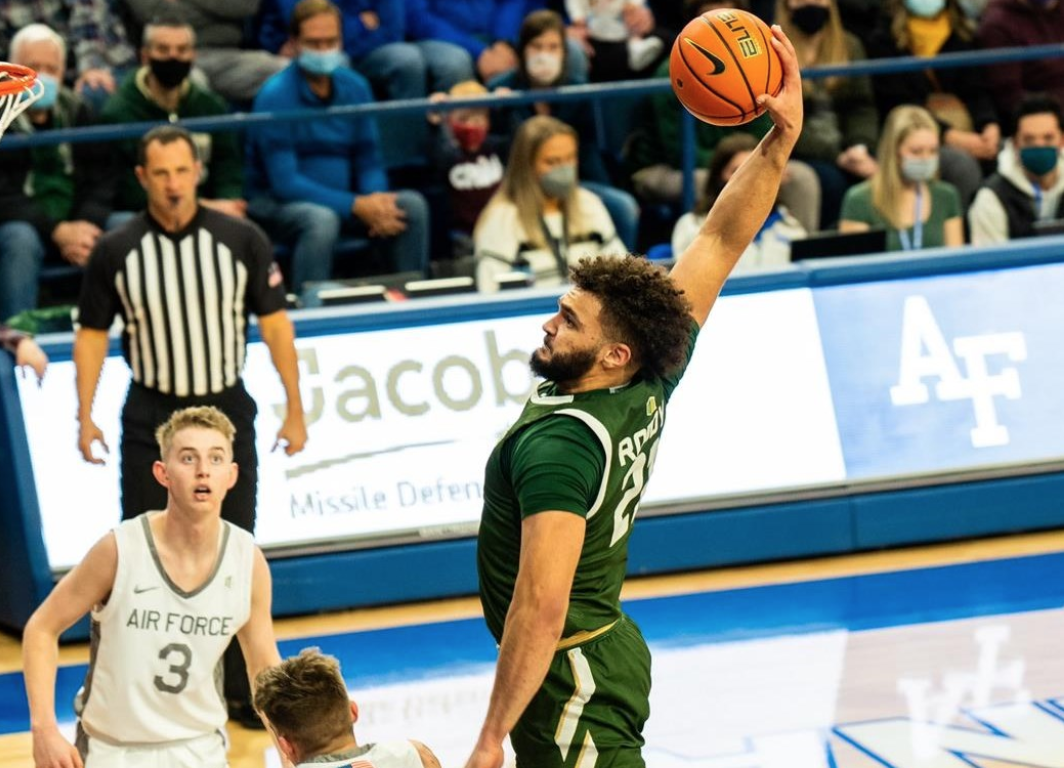 Thanks to big weeks on the hardwood, Kansas’ Ochai Agbaji and Colorado State’s David Roddy are rising in our college basketball player rankings at The DPI Gradebook.

Before you know it, February is going to be here. That means we’re getting really, really close to the NCAA Tournament. Obviously, there’s still a lot of basketball left to be played, but the shape of the season is inching nearer to its final form.

Despite all the fluctuations in the Big 12 — it was Texas’ league to lose in the preseason, and then Baylor’s just a couple months later, with Texas Tech and Iowa State suddenly becoming popular dark horses in the meantime — Kansas has remained the most consistent program in that league to this point. One of the reasons why is the 1-2 punch of Ochai Agbaji and Christian Braun, and we’ll dive in a bit more on the former in a moment.

Other conference races are also starting to get really interesting, from the top of the high-majors to the fights for conference tournament spots in the low-majors.

As they do, it’s time once again to check in on all of the top performers in the Gold Star Guide from each of the four Heat Check CBB regions.

For the uninitiated, the regions are:

We’ll start in the Midwest, where the frontman of Kansas’ Batman-and-Robin duo took center stage twice last week and thrusted himself into No. 6 spot nationally.

Not many players had a better week than Ochai Agbaji. His game-winner against Kansas State capped a 29-point performance and saved the Jayhawks from the dubious distinction of losing to Kansas State in Manhattan. Then, on Monday, he dropped an eye-popping 37 points on Texas Tech’s top-five defense in a double-overtime win. Agbaji is one of only six players nationwide with 125 or more 3-point attempts and 75 or more attempts at the rim — and of those players, he’s the only one shooting over 40 percent from deep (.470 3P%) and over 70 percent at the rim (.780 close 2P%). This past week was no accident. Agbaji has pretty much sewn up an All-America nod before the team has even played 20 games.

Mosley’s 40-point eruption against Loyola Chicago was easily the top Gold Star performance of the week, resulting one of the highest Gold Star scores of the entire season at 56.67 points. It’s not as if this scoring outburst came out of nowhere — Mosley had 43 against Northern Iowa earlier in the month and has gone for 25-plus on 16 occasions in the past two seasons. Still, doing it in on the road in a 20-point upset of the nationally ranked league leader? Now that’s special. He is truly Mr. Automatic for the Bears, too. Mosley is one of just five players nationally shooting 40 percent on 3-pointers, 50 percent on mid-range shots, 60 percent at the rim and 70 percent from the stripe (min. 25 attempts in each).

After more than two months of running these updates, the West is still ruled by the same king — at least for the time being. Roddy is hot on Justin Bean‘s tail, though, and has been on a tear ever since the Rams suffered their one and only loss to San Diego State at Viejas Arena. In Colorado State’s five wins since then, Roddy the Wrecking Ball has gone off for 16.6 points, 8.2 rebounds, 4.2 assists and 1.4 steals per game. As if that weren’t enough, he is shooting 30-of-41 (.585) on 2-pointers and 6-of-10 (.600) on 3s in that span. Two more big games should be in the offing as CSU takes on UNLV and Wyoming this week, but the one that really matters for Roddy and the Rams is the Feb. 4 home rematch against SDSU.

While his numbers don’t exactly jump off the page, Jules Bernard’s contribution against Arizona earlier this week was pivotal to that win. He scored 9 of his 15 points in the second half, including a 3-pointer that effectively snuffed out Arizona’s last real attempt at making a comeback. Bernard is something of a forgotten man alongside more easily recognized players like Johnny Juzang, Jaime Jaquez and Tyger Campbell, but he is forcing his way into the narrative. The senior is posting career-high numbers in offensive rating (119.8), turnover rate (9.6 percent) and free throw percentage (.794) — all of which signal a maturity in his game that could help the Bruins back to another Final Four appearance.

Villanova has settled into its usual place near the top of the Big East standings, and while Collin Gillespie will be the face of the Fox Sports promos, Moore’s play has been equally critical. He had just six points in the Wildcats’ stinker of a league opener against Creighton on Dec. 17 — but in nine games since then, Moore has averaged 16.8 points and Villanova has lost just once. Somewhat surprisingly, Moore has both a higher usage rate and a lower turnover rate than Gillespie. He is posting career-bests in both those categories, and Moore’s 3-pointer has returned after a dip last year. The junior is not just eyeing a likely spot on the All-Big East team — he may even factor into the league’s POY conversation.

After making the most recent All-Ivy League first team back in 2019-20, Swain is positioning himself well in the race for the Ivy POY award in 2022. One would think 37-point outings like the one he had against Columbia are helping his cause. Swain’s 3-point shot has been a major strength of his game since Day 1 in New Haven, and while his current clip of 36.9 percent is a solid number, it’s also a career-low for the senior. He was on fire against the Lions, though, knocking down 6-of-8 from downtown as the Yalies improved to 3-1 in league play. The next matchup against league leaders Princeton could bode well for another big day. The Tigers have allowed nine players to hit the 20-point mark against them this season.

While the top three teams in Conference USA all duke it out in the league’s West division, Young and the 49ers are quietly tied for first in East. More than anyone else, that is the work of Jahmir Young. The junior guard has scored in double figures in all 17 of Charlotte’s games so far this year, and he is leading the team in scoring with 19.1 points per game. Most recently against Old Dominion, Young went off for 21 points in a win over Old Dominion. All eyes have been on the West — but with a scorer like Young in tow, Charlotte could be a dangerous dark horse once the conference tournament rolls around. And just so you don’t think he’s a one-trick pony: Young leads the team in assists and steals, and he is second in rebounding.

Norchad Omier is one of my favorite under-the-radar players in all of college basketball, and performances like the one he had against Texas State are exactly why. Omier — the first D-1 scholarship player to hail from Nicaragua — put in a promising freshman campaign last season, but he has been going crazy in Sun Belt play this year. In the Red Wolves’ first five conference games, Omier is averaging 22.4 points, 13.6 rebounds (4.6 offensive) and 2.4 blocks, all while shooting 69.4 percent from the field. He has also played at least 36 minutes in each of the past four games, the first times all season he has topped the 30-minute plateau. As a result, Arkansas State is 13-4 and sits in first place in the Sun Belt.