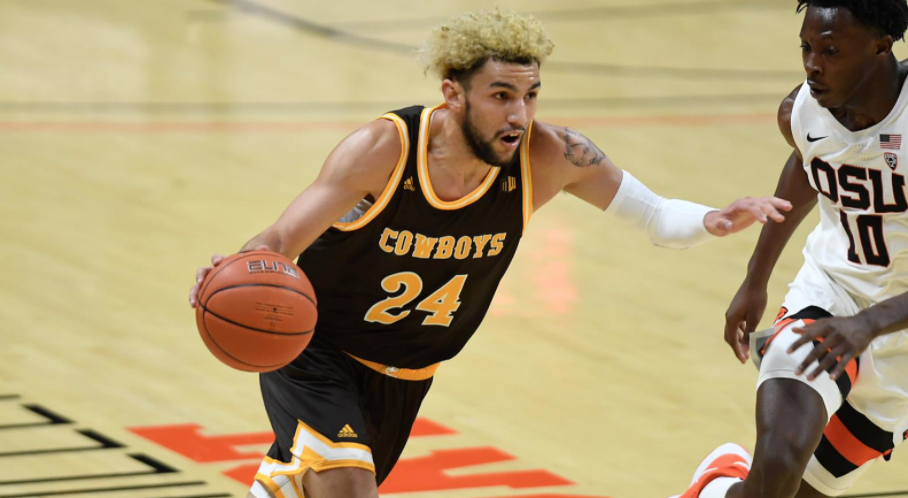 Duke’s Paolo Banchero and Wyoming’s Hunter Maldonado are two stars on the rise in our college basketball player rankings at The DPI Gradebook.

We’ve been running these Gold Star updates for more than two months, and over that span, it has become clear that a change was needed around these parts.

Loyal readers likely have noticed that our single-game shortlists have featured many of the same games all season long. That’s boring, though. No offense intended to Justin Bean, but I was really getting sick of looking at his (admittedly incredible!) three-game run from back before Thanksgiving.

Well, we make our own rules around here, and in that spirit, we’re shaking things up. Going forward, we will be displaying each region’s top five individual performances from the past week. This will help us keep things fresh, and we know you’ll enjoy.

Also, a quick refresher/tutorial on the Gold Star might be nice for all involved. Here are some guideposts for reading the scores:

We’ll start in the Southeast Region again, as the top performance of the week happened in the warm glow of the ASUN Conference.

Banchero has been as-advertised after coming into the season with an incredible amount of hype. He has impressive agility for his size, and he can make shots from all over the court. The highly touted freshman has turned it up a notch of late, though. After scoring 20 or more points four times in his first 13 games, Paolo has gone over 20 in each of the past four games. Unfortunately for Duke, the Blue Devils are just 2-2 in that span. Regardless, Banchero has the numbers to go along with the name-recognition factor, and that combination will make him a National POY contender barring any unforeseen circumstances.

Whew! McGhee is no stranger to outbursts, having set a career high earlier this year with 41 points against Stanford in the Diamond Head Classic. This past week, though, he tacked on another touchdown, setting a new personal best with 48 against FGCU. The Flames’ flamethrower was on fire from all over the court, too. Get this: McGhee scored eight 2-pointers, eight 3-pointers and eight free throws, which was just the second time in at least the last 10 seasons that has been done (Nate Wolters, 2013 South Dakota State). Liberty stumbled more than they would have liked in nonconference play, but McGhee has them back on track in the ASUN.

OK, this Wyoming thing might actually be happening. Maldonado is a special player and one of the country’s most underrated. He may not be a natural point guard in the typical sense, but he is the perfect player to orchestrate Jeff Linder’s offense. Maldo currently ranks fourth nationally in assists per game, and he is second on the team in scoring behind Graham Ike. Thanks in large part to the senior, the Cowboys are 14-2 overall and 3-0 in the Mountain West. Suddenly, an at-large bid does not seem all that far-fetched. It is worth noting, though, that Wyoming’s only scheduled game against San Diego State this year was postponed and has yet to be rescheduled.

Don’t look now, but Oregon appears to be back. One of the reasons is the recent play of Richardson, who came into the year with expectations that were probably unfairly high. While he may not be Payton Pritchard or Chris Duarte, the Duck senior is coming into his own as the leader of the team. During Oregon’s current five-game win streak, Richardson is averaging just shy of 20 points per game and has 17 assists to just five turnovers. Most recently he went off for a combined 44 points against UCLA and USC, the first time in Pac-12 (or Pac-8/10) history that a team has picked up two wins over top-five schools on the same road trip.

As far as Summit Leaguers were concerned, all eyes were on Max Abmas coming into the season, thanks to last year’s NCAA Tournament run. It has been Baylor Scheierman, however, who has been arguably the best overall player in the league. Aside from having the highest true shooting percentage in Summit League play, Scheierman also ranks in the league’s top four in offensive rating, effective field goal rate, defensive rebound percentage, assist rate, steal percentage and 3-point percentage. He is truly doing it all for the 15-4 Jackrabbits, and the eventual result could be South Dakota State’s first NCAA Tournament since the 2017-18 season.

Massner was quietly an All-Southland selection last year at Northwestern State, making the second team after averaging 13 points a game for the Demons. Now a Leatherneck, Massner is angling for some Summit League honors. That could be a reality if he puts in some more performances like the one he had against North Dakota State. He tied a career high with 31 points against the Bison, matching a mark he set in an overtime win over Denver back on Dec. 20. He also notched the third double-double of his career in the process. Massner’s play is a big part of how Rob Jeter’s 12-6 team has outperformed expectations to this point of the season.

As seen in the shortlist below, Estrada had two huge games last week, which resulted in a big jump in the Gold Star rankings. Faithful readers may remember that Zach Cooks was Hofstra’s first representative in these pages, but with Cooks on the shelf for most of the past month, Estrada has emerged as the unquestioned alpha dog. That reality came to a head this past week, as Estrada dropped 56 points and 14 assists in two significant league wins over Drexel and Delaware. Estrada has led the team to a 5-1 record in games without Cooks, a mark that includes wins over Arkansas, Monmouth and James Madison in addition to last week’s victories.

The Sharks are living up to their name of late, quietly surging up the NEC leaderboard thanks to four straight league wins. The biggest of those wins came in a 22-point drubbing of Central Connecticut, fueled by Flowers’ 30-7-7 night. The fifth-year senior has rediscovered his 3-point shot this year, hitting 5-of-9 against CCSU. The 6-9 Flowers is shooting 37.2 percent from deep this year on nearly eight attempts per game after failing to break the 30-percent mark in two consecutive years. He also tied a career high with seven assists against the Blue Devils, a mark he has reached exactly once in each of the past four seasons for Long Island.