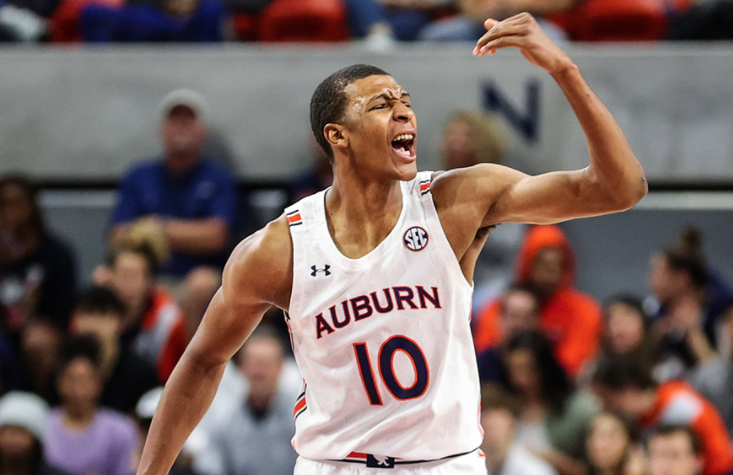 Jabari Smith, Auburn’s star freshman forward, is enjoying a breakout campaign that has him soaring up NBA Draft charts.

With a Saturday showdown vs. No. 12 Kentucky (1 p.m. ET, CBS), Auburn freshman Jabari Smith will once again prepare for another opportunity to wow the nation.

Smith has also helped lead Auburn to one of its best starts in program history at 16-1 and 6-0 in the SEC. The Tigers rank No. 2 in the AP poll after receiving 36 first-place votes on Monday.

Auburn is a legitimate national title threat, thanks in large part to Smith. Check out everything you need to know about the Tigers star below.

A product of Tyrone, Ga., Jabari Smith began playing varsity basketball at Sandy Creek High School as a sophomore. Smith grew from 6-5 as a freshman to 6-10 as a senior.

In his final year at Sandy Creek, Smith averaged 24 points, 10 rebounds, three steals and three blocks per game. He led his team to a runner-up finish and was named Mr. Georgia Basketball, the Georgia Gatorade Player of the Year and a McDonald’s All-American.

He’s a projected top pick in the 2022 NBA Draft

Here’s where Smith ranks on the most recent NBA Draft big boards and mock drafts:

Should the projections remain true come draft night, Smith could be the first player in Auburn history taken in the top 3 of the NBA Draft.

His father played in the NBA

Jabari Smith’s father, Jabari Smith Sr., was drafted 45th overall by the Sacramento Kings in 2000. He played 108 games at the NBA level between the Kings, Philadelphia 76ers and New Jersey Nets, in addition to several years overseas.

Smith Sr. used to wake up 5-year-old Jabari as early as 5:30 a.m. to practice his footwork, instilling a pro-like work ethic from a young age. The younger Jabari spent much of his childhood watching his father and familiarizing himself with the game. He’s also a distant cousin of 2001 No. 1 NBA Draft selection Kwame Brown.

He compares his game to Anthony Davis and Kristaps Porzingis

To little surprise, Smith models his game after some notable NBA stretch forwards.

“I would right now compare myself to Anthony Davis, Kristaps Porzingis, and guys like that,” Smith told BTL Scouting. “I try to watch Jayson Tatum and how simple he plays. I of course look up to my dad and how he played when he was younger.”

Surely enough, Smith stands out given his size and versatility. The chart below compares Smith’s statistics among all players listed at 6-10 or taller this season. Data is courtesy of BartTorvik.com.

No matter what, he’s “forever humble”

Tattooed on Smith’s chest is the phrase “Forever humble” — the same two words he has written on his Twitter profile.

“That’s what I try to live by – just always stay humble and remember where you came from,” Smith told 24/7 Sports. “It’s just remembering that and not getting caught up in the next step, just focusing on the present and enjoying life right now.”

Smith still likes to have some fun, though. Check out the nickname he made for Alabama’s Coleman Coliseum on Instagram after the Tigers’ 81-77 win earlier this month.

We’ll see plenty more of Smith in the months — and years — to come.