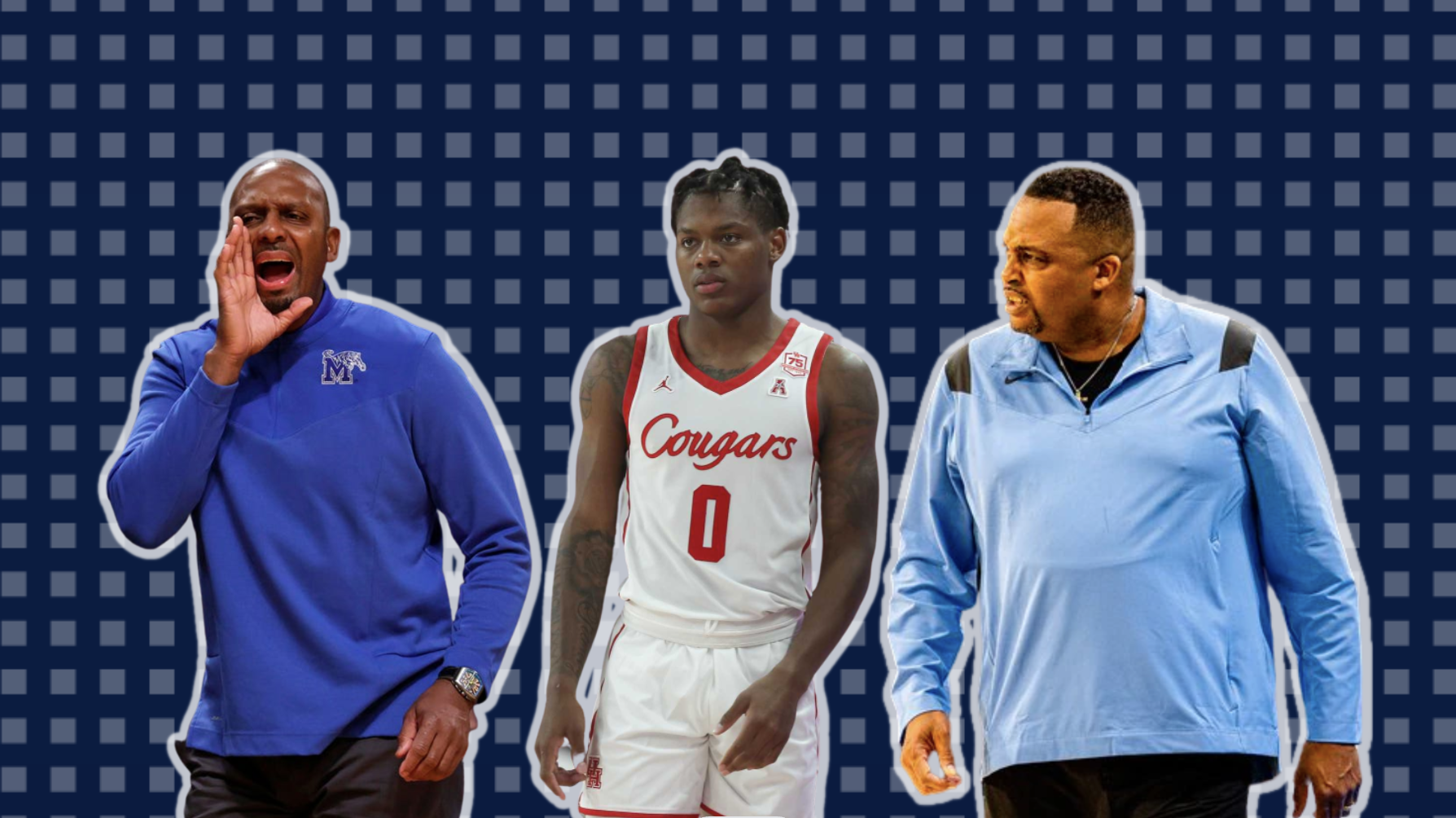 While a key transfer shakes things up for one of the league’s top contenders, the road to an AAC title still runs through Houston.

After reaching at least the second weekend in the past three NCAA Tournaments — including a trip to the Final Four in 2021 — Houston has established itself as the class of the AAC.

Though the Cougars will be in the Big 12 before long, they are still the kings of the AAC mountain for now. Kelvin Sampson’s team had a big question mark surrounding Marcus Sasser‘s draft decision, but their star guard is back in the fold. There may not be a more well-coached unit in the country, and it has made this program mostly recession-proof over the years. Houston will have plenty of talent nipping at his heels, though.

Memphis made the biggest splash of the offseason by snatching the reigning league POY away from an AAC rival in one of the biggest intraconference transfers in recent memory. Cincinnati hit for a solid triple in the transfer portal with a notable three-man haul that includes its own in-league poach from Memphis. The AAC has a doughy middle that includes good-but-probably-not-great squads like SMU, Tulane, UCF and Wichita State. Meanwhile, South Florida, Tulsa and East Carolina all have sizable hills to climb.

While there may be a clear-cut top two in the AAC, the league gets murkier below that line. After wading through those muddy waters, here is our way-too-early prediction for the AAC in 2022-23.

11. East Carolina: After going 6-11 in the AAC last season, the Pirates now must figure out how to replace their best player for the second year in a row. To stay out of the basement, ECU will likely need a breakout season from the likes of Tremont Robinson-White or former Boston College starter Wynston Tabbs.
10. Tulsa: The Golden Hurricane went 4-14 in league play last year and lost one of its top players in Jeriah Horne. Eric Konkol brings in three-star Charles Chukwu to replace some of Horne’s frontcourt size and production, and former Chicago State starter Brandon Betson will likely take over at point guard.
9. South Florida: Brian Gregory has been busy in the transfer portal, grabbing Tyler Harris (Memphis), Selton Miguel (Kansas State) and Keyshawn Bryant (South Carolina) to improve one of the nation’s worst offenses. The talent is there, but Gregory has only had one winning season in five years at the helm.
8. Temple: The Owls finally gained momentum under coach Aaron McKie last year, finishing fourth in the league and posting the first winning record in McKie’s tenure. Temple lost its top facilitator (Jeremiah Williams), which dampens the effect of bringing back Khalif Battle, Damian Dunn and Jahlil White.
7. Wichita State: The Shockers got crushed by departures this spring, with Tyson Etienne gone to the NBA Draft and three more starters being among the nine total transfers out of Wichita. Isaac Brown brought some potentially impactful pieces back from the portal, but there are question marks around this team.
6. UCF: Johnny Dawkins‘ club also went through some offseason turmoil, losing its top three scorers to the pros and the portal. CJ Walker should take a step, Darius Johnson made the all-freshman team last year and the new additions (Ithiel Horton, Michael Durr, Taylor Hendricks) should fit in well around them.
5. Tulane: The Green Wave is on the upswing after avoiding the perils of the portal for the most part. Tulane brings back three double-figure scorers and replaced DeVon Baker (transfer to Ohio) on the wing with high-major transfers from Georgetown (Collin Holloway) and Oregon State (Tre Williams).
4. SMU: The face of the franchise is gone, as reigning AAC Player of the Year Kendric Davis transferred in-conference to Memphis. The Mustangs got a good haul back from the portal, headlined by Samuell Williamson, Efe Odigie and Keon Ambrose-Hylton, but there’s a big void at point guard. If new coach Rob Lanier can fill that hole with promising prospect Zhuric Phelps, SMU might not fall off too much.
3. Cincinnati: Wes Miller‘s first season in the 513 was going swimmingly until the wheels fell off down the stretch, with the Bearcats losing eight of their last 10 games. Miller added some veteran experience and depth from the transfer portal, which could help a strong returning core headlined by David DeJulius, Jeremiah Davenport and Mika Adams-Woods. Cincinnati is well on its way back to national relevance.
2. Memphis: Despite reaching the NCAA Tournament for the first time under Penny Hardaway, Memphis lost big man Jalen Duren to the draft and saw a mass exodus to the portal. The Tigers avoided a full-on nosedive, though, with the return of DeAndre Williams on top of the addition of point guard Kendric Davis from SMU — arguably the most coveted transfer in this cycle. They also shored up their rim protection with the late addition of 6-10 transfer Kaodirichi Akobundu-Ehiogu.
1. Houston: For at least one more year, it appears the AAC will run through Houston. The Cougars have won 21-plus games in each of the past six seasons with back-to-back trips to the Elite Eight under coach Kelvin Sampson. With the return of lead guard and potential league POY Marcus Sasser, the Cougars will boast a rotation that includes heralded freshmen Jarace Walker and Terrance Arceneaux and fellow returners Jamal Shead, Tramon Mark and Reggie Chaney. Even without Sasser, those other five would likely be a second-weekend team. With him, Houston is in the national championship conversation.

Tulane: Ron Hunter has slowly been building the Green Wave up over the past few seasons, culminating in a fifth-place league finish last year and the team’s first top-100 KenPom ranking since 2000. Tulane brings back almost everyone, including Jalen Cook (18.0 points per game), Jaylen Forbes (16.5) and Kevin Cross (13.9). The Wave also added two high-major transfers and should continue on its steady upward trajectory. This should be a top-half team in the league — but can they break into the top four?

Kaodirichi Akobundu-Ehiogu, Memphis: OK, so, before you get too worked up — we have not forgotten about Kendric Davis. More on him in a second. However, Memphis hit a second home run on May 29 by inking “Kao” to take up Jalen Duren’s old spot in the post. While Davis brings with him stability and veteran leadership that sets a very high floor for Memphis, the late addition of Akobundu-Ehiogu raises the Tigers’ ceiling. His length, athleticism and shot-blocking should be a perfect fit, and this move likely cements Memphis as a top-two team in the AAC — if Kao makes a big jump, they may not be No. 2.

Jarace Walker, Houston: In Walker, a 6-8 power forward from IMG Academy, the Cougars bring in the league’s only five-star recruit in the 247Sports rankings. Walker averaged 16.7 points, 8.2 rebounds and 4.0 assists in his final year at IMG, and he brings a wealth of offensive talent to the low block with the scoring touch and passing skills to be a huge inside-out threat. With Kelvin Sampson coaching him up on the defensive end, expect Walker to be a dangerously well-rounded weapon by the time the season ends.

Kendric Davis, Memphis: After doing all he could do at SMU, Davis made the intraconference jump over to Memphis and will be the focal point of Penny Hardaway’s team next year. Two of the main knocks on the Penny Hardaway era have been too much inexperience and a lack of talent at the point. There might not have been another player in America who could fill those two voids like Davis — the league’s reigning Player of the Year. Even with Marcus Sasser coming back for Houston, look for Davis to maintain his place as one of the nation’s top point guards while trying to hold onto his crown as the AAC’s top player.

Marcus Sasser, Houston: Sasser appeared in just 12 games last season, going down with a toe injury that derailed a promising third year in Houston. He was averaging 17.7 points per game to lead UH in scoring when he went down, also shooting 43.7 percent from deep and adding 2.6 assists and 2.2 steals for good measure. After waiting until the last minute to pull his name out of the NBA Draft, Sasser is back and may just be the missing piece to a national title run. With all due respect to Kendric Davis, a healthy Sasser should check the “best player on the best team” box — making him the odds-on choice to win AAC POY.