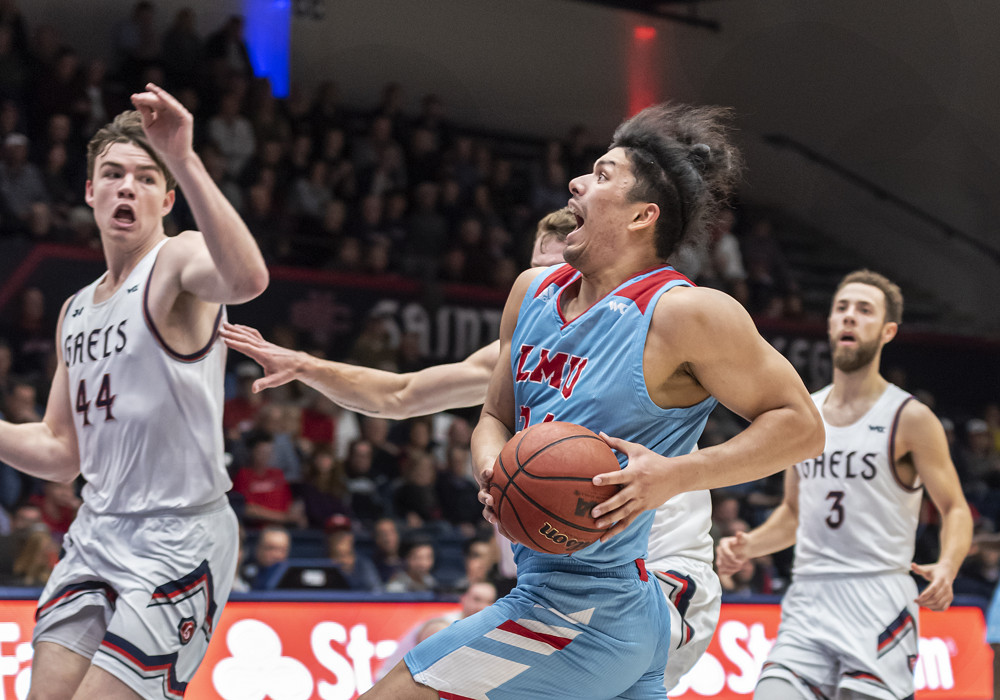 Who is Keli Leaupepe? Five facts about the Loyola Marymount forward

This case holds true for Loyola Marymount big man Keli Leaupepe, whose physical appearance and on-court presence has taken the sport by storm during the first week of the season.

Here are five fast facts you need to know about Keli Leaupepe:

Social media has fallen in love with Keli Leaupepe

What’s not to like about Keli Leaupepe? In the era of COVID-19, many people haven’t been to a barbershop or hair salon in months. Meanwhile, Leaupepe is thriving. Listed at 6-6/248, Loyola Marymount’s forward is hard to miss on the floor:

He’s the future of the LMU program

Not only has Leaupepe become a fan favorite for his looks and personality, he’s also been especially productive on the court. As a freshman, his role expanded as the season progressed. From the start of February through the remainder of the season, Leaupepe started in nine of his 10 appearances, averaging 14.9 points and 6.2 rebounds in 30.3 minutes of action.

Overall, Leaupepe’s Year 1 efforts landed him on the conference’s all-freshman team alongside fellow big men Drew Timme of Gonzaga and Santa Clara’s Jaden Bediako. In league play alone, he led the WCC in free-throw percentage and was sixth in offensive rebounding percentage while shooting 40.5 percent from 3-point range. His well-rounded skill set will pay massive dividends for the future of the LMU program under first-year head coach Stan Johnson.

He comes from the same Australian school as Ben Simmons

Leaupepe’s development in his native Australia helped pave the way towards Division-I basketball in the United States. He has a laundry list of awards and recognitions for his successes with Australia’s international teams, including the 2017 U18 Australian State Championships gold medal and the 2018 U20 gold model as well. He also represented Australia in the 2018 NBA Asia-Pacific Team Camp, winning the MVP award.

A product of Melbourne, Australia, the second-largest city in the country, Leaupepe’s roots are familiar to those who have recruited in the area. Leaupepe attended Box Hill Secondary College, a basketball powerhouse that Ben Simmons also attended before heading to the United States. Box Hill has produced several D-I players over the years, including Eastern Washington’s Venky Jois and Tyler Robertson and Stetson’s Joel Naburgs.

Like many mid-major teams hoping to gain an edge, Johnson’s team is stock-piled with international talent. In addition to Leaupepe, the Lions have four other players who were born overseas on this year’s roster. Guard Mayoum Mayoum was born in Sudan and grew up in Melbourne, Lazar Nekic is a 7-footer out of Belgrade, Serbia, 7-3 starting center Mattias Markusson is originally from Stockholm, Sweden, and forward Ivan Alipiev arrived via Sophia, Bulgaria. International recruiting has helped shape LMU rosters in the past and figures to be an emphasis for future rosters as well.

“The culture was the biggest change for me, which was something I didn’t really think about much coming in,” Leaupepe said about adjusting to playing basketball in the United States. “There were things such as my slang I had to change because at times people didn’t know what I was talking about or thought I meant something completely different, which was funny.”

Given his long-standing history as a huge eater himself, it shouldn’t be a surprise that Charles Barkley is Leaupepe’s favorite pro athlete.

When asked about his Loyola Marymount commitment, Leaupepe was quick to acknowledge Los Angeles’ food scene as part of his decision.

“I actually committed before I even visited because I just really liked it,” he said. “I liked the food, the view, the people sounded really nice and so I committed, came on a visit and then I ended up here.”