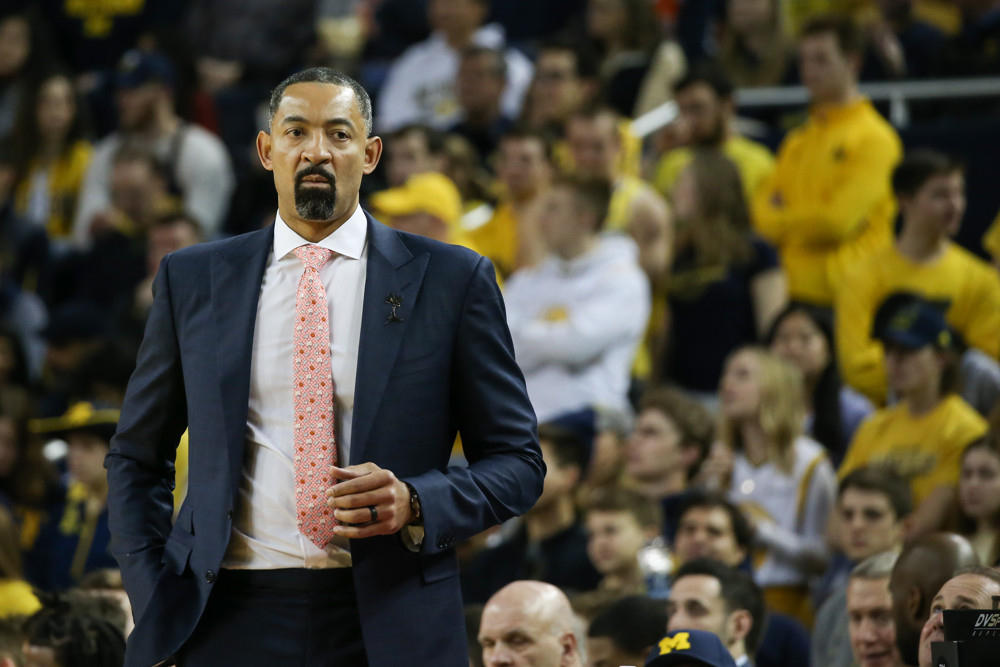 Behind a stellar supporting cast and returning All-American Hunter Dickinson, Michigan basketball has the makings of a national title contender.

In his second season at the helm, Juwan Howard gave irrevocable proof that the Michigan basketball program made the right hire. Sure, in Year 1, the Wolverines emerged as a fun surprise, turning heads in the nonconference by beating Gonzaga in the Battle 4 Atlantis title game. But no one — not even Michigan fans — foresaw the success of last year’s team.

For instance, think back to the fall of 2020. In the preseason rankings, the Maize and Blue placed 25th in the AP poll and 15th on KenPom. But Howard proceeded to obliterate those expectations. He led the Wolverines to a Big Ten title and a 1-seed, winning Coach of the Year honors in the process. In addition to the on-court success, the head coach landed the nation’s second-ranked recruiting class, per 247Sports. Michigan cracking our top 5 — despite returning just 39.9 percent of last season’s minutes — speaks volumes to both Howard’s roster-building and his coaching.

Notably, the Wolverines were one of just three teams to finish top 10 in KenPom’s adjusted offensive efficiency and adjusted defensive efficiency metrics last season. Now, a year later, Michigan basketball totes the blueprint to again stand out as an elite two-way squad.

Let’s start with the offense. Much of Michigan’s game plan centers on sophomore big man Hunter Dickinson. As a freshman, the DeMatha product provided a spark off the bench that turned into an inferno. By his sixth game, Howard could keep him out of the starting lineup no longer. Dickinson showcases ox-like force in the post — almost no one can beat him for positioning. He uses this strength to turn entry passes into dunks before defenders can even blink.

More than just a post-up threat, the lefty also shines as a beastly screen-and-roller and a determined rebounder on both ends of the court. But equally impactful is the attention he garners from defenses when the ball isn’t in his hands. For example, observe the clip below from Michigan’s Sweet 16 win over Florida State. Dickinson sets a ball screen for Mike Smith before faking a down screen for Franz Wagner. In the process, he commands two defenders, clearing the lane for Wagner.

Of course, Dickinson anticipates a few key improvements heading into his second season. Scoring with his right hand and shooting from distance top the list. Although, even if he only marginally progresses in these areas, another All-American selection could be in store.

The sophomore will benefit from playing in a loaded frontcourt. Senior Brandon Johns flashed his worth in the tournament in the stead of the injured Isaiah Livers. The hard-nosed forward possesses decent perimeter skills and slots next to Dickinson as a solid tertiary piece. Sophomore Terrance Williams may also earn an increased role — he showed strength around the basket and prowess on the glass in limited minutes as a frosh.

But the most monstrous X-factor along the frontline is five-star freshman Moussa Diabate. A spring-loaded forward with a relentless motor, the IMG product could break out as Michigan’s second-best player. He will gain the most notoriety for his defense (more on that later), but he supplies enough on offense to make an impact. While Diabate may not yet have an extensive shooting range, his offensive rebounding and rim-running still devastate opponents. Note how quickly he covers ground as he gallops down the floor:

Turning to the perimeter, Michigan basketball deploys another high-upside freshman in Caleb Houstan. The 6-8 Canadian will help maintain the Wolverines’ spacing, as he bombs 3s from all over the court. Whether curling off a screen or pulling up off the dribble, Houstan frustrates defenders with his lethal jumper. Plus, when his man steps to him, he has the handle to attack closeouts and slice to the rim.

In the backcourt, the Wolverines showcase a trio of versatile guards who will play the bulk of the minutes. Senior Eli Brooks is an all-star role player who can run the point or play effectively off-ball. He gets free for easy buckets using sharp cuts, and he cashes 3s off the catch. Next, there’s top-50 freshman Kobe Bufkin, a 6-4 combo guard who will bring a scoring burst off the bench. Lastly, Coastal Carolina transfer DeVante Jones looks to replace Mike Smith as the primary ballhandler.

Regarding Jones, Howard will hope lightning strikes twice with a mid-major point guard. But the burly floor general’s combination of skill and size gives optimism for a smooth transition to the Big Ten. Jones storms into the lane at will, fighting through contact and drawing fouls. He displays dexterity finishing with either hand, but he also stops and pops for fadeaways and floaters. With Dickinson sealing off paint protectors and capable shooters drawing defenders away, Jones will frequently find open paths to the cup.

On the other end of the court, the Michigan basketball defense could elevate itself to national title favorites. And like the offense, it all starts with Dickinson. Last season, his presence around the basket boosted Michigan’s stellar defensive 2-point percentage, which ranked third nationally. But beyond rim protection, the on-off metrics reveal the holistic effect Dickinson has on the defense:

As the 7-foot hulk protects the paint, the guards and wings have more freedom to extend pressure and wreak havoc. Both Houstan and Diabate project as high-level defenders, especially by freshman standards. The duo provides switchability on the perimeter, with Diabate, in particular, shining as a multi-positional pest. Don’t be surprised to see him press ballhandlers the length of the court — something Franz Wagner and Chaundee Brown frequently did last year. (And I’d be remiss to not mention Diabate’s menacing blocks.)

Jones, too, will make splash plays on defense. The ballhawk ranked 18th in the country in steal rate last season, tormenting foes whether on-ball or off-ball. Again, with Dickinson serving as a security blanket, Jones can gamble with little fear of a defensive breakdown.

The pieces are in place for Juwan to do what he couldn’t as a student — bring a title to Ann Arbor. Unlike the last two seasons, they won’t catch anybody off guard. But with a National Player of the Year contender in the paint and a perfect supporting cast, the Wolverines will be up for the task.