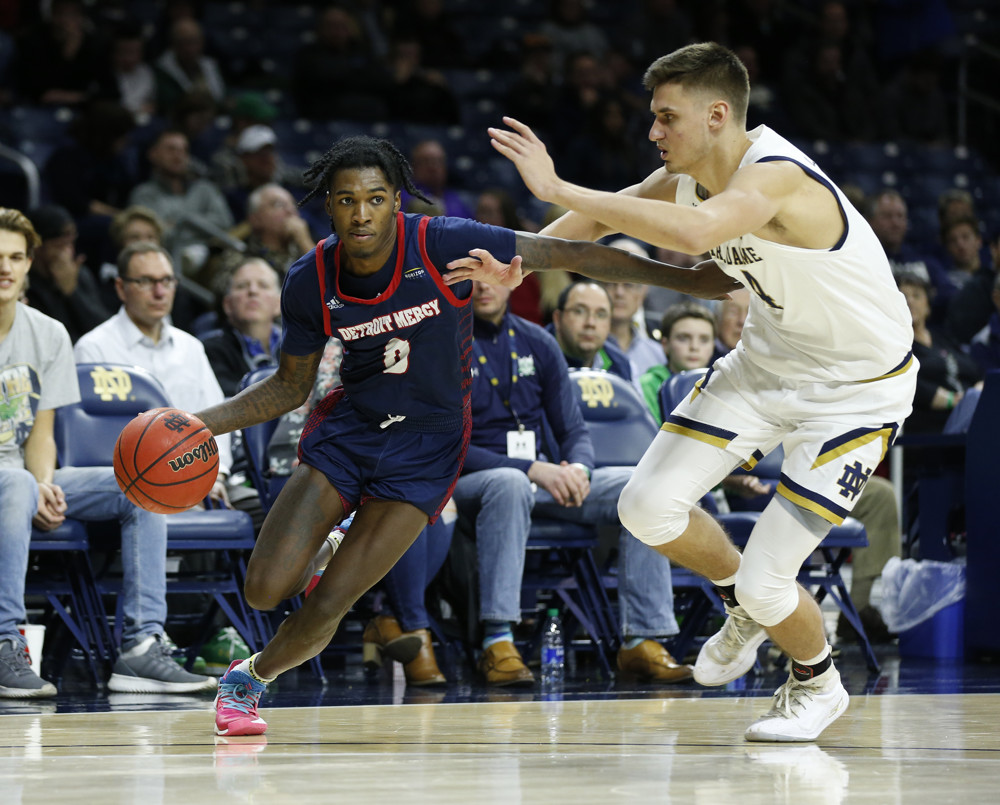 The Rauf Report is back again for the annual bold predictions for each of the 32 college basketball conferences.

College basketball is a sport known for its unpredictability. The upsets, Cinderellas, breakout players, and surprise teams all spark the excitement.

Of course, by nature of its unpredictability, college hoops is challenging to predict. Teams with high expectations flame out, others overachieve, and players come from relative obscurity to superstardom.

Last year saw two blue bloods, Duke and Kentucky, start the year in the top 10 and end up missing the NCAA Tournament entirely. On the flip side, almost no one had Oral Roberts emerging as a Sweet 16 team (shoutout Sean Paul).

But here we are, back with another crack at trying to predict those crazy things for every conference! This is my 10th season covering college basketball in some capacity (which is crazy) and I’ve made these kind of predictions at the start of every season. Now it’s a part of every Hope & Rauf podcast (listen/subscribe wherever you get your podcasts)!

Last year, though, we expanded it from a few selections to one for every single conference. The madness doesn’t discriminate based on TV deals or conference size, after all. If you want to see how I did last season, you can check it out here.

Let’s dig into it for the new season! Here are my bold predictions for every conference in 2020-21:

The reigning America East Player of the Year returns in Ryan Davis, who leads a Vermont team that is expected to win the league. However, Olaniyi’s return to Stony Brook after a season at Miami has the Seawolves as Vermont’s biggest competitor. I expect the two-time All-AEC player to emerge as the conference’s best player.

Memphis and Houston will be the two teams at the top of the American and will hoard all the headlines. That’s fine and expected. But the AAC race is wide open behind them and UCF has the returning experience and talent to capitalize.

Liberty is going to dominate the Atlantic Sun yet again as it returns just about everyone from last year’s team, including reigning ASUN POY Darius McGhee. I’ll give them room for one hiccup/off night, though this group might go undefeated.

BOTH ST. BONAVENTURE AND RICHMOND FINISH THE SEASON RANKED

The A10 will be one of the nation’s premier non-power conferences again with St. Bonaventure and Richmond clearly leading the way. The Bonnies begin the season ranked in the Top 25 while the Spiders return a core that was ranked last year before three COVID pauses and a myriad of injuries derailed their season.

There’s a very real chance this award goes to Coach K in honorary fashion (Duke could also be really good this year) but, if UNC is as good as expected, Hubert Davis is going to get a lot of love as well given the way he fine-tuned his roster.

The NCAA’s decision to uphold Oklahoma State’s postseason ban aside, I expect the Cowboys to play quality basketball during the regular season. Anderson is in line to carry the offense after his late-season breakout and should emerge as one of the Big 12’s most lethal offensive threats.

XAVIER FINISHES OUTSIDE THE TOP FIVE IN CONFERENCE STANDINGS

Xavier returns some key stars in Paul Scruggs and Zach Freemantle — the latter is out indefinitely with a foot injury — but this team still has holes. Travis Steele’s coaching chops have also faced a great deal of skepticism as well. The Musketeers will sneak into the NCAA Tournament as the sixth-place team in a close jumble of the Big East’s middle.

The Virginia Tech transfer picked Northern Arizona because they pitched on having a Max Abmas-type central role for them. He’s going to have plenty of opportunities to post big numbers, and I expect we see that come to fruition.

Pat Kelsey is now coaching the College of Charleston and Chandler Vaudrin is now playing professionally. That said, Winthrop still has loads more talent than anyone else in the Big South, led by D.J. Burns.

RUTGERS FINISHES AHEAD OF INDIANA

This is a combination of my thoughts about Indiana’s Mike Woodson hire and belief that Rutgers is flying under the radar. I expect the Hoosiers to underachieve while the Scarlet Knights have a nice core in Geo Baker, Ron Harper Jr., and Cliff Omoruyi that should put them in the top half of the Big Ten.

Head coach Mikey Magpayo nearly got Riverside to the dance last season and returns perhaps the conference’s best player in Zyon Pullin. Expect this group to make history this season.

The CAA has deemed James Madison ineligible for the conference’s automatic bid because it’s leaving for the Sun Belt. It’s a shame because the Dukes might be the conference’s best team, which I expect them to prove in the regular season. But, with JMU out of the way, Speedy Claxton’s Hofstra team looks ready to dance.

I’m not sure who will win CUSA this season, but whoever does should have a great chance to follow in the footsteps of North Texas. Louisiana Tech, UAB and Western Kentucky are all capable of winning an NCAA Tournament game.

Davis has finished third, fourth, and second in the nation in scoring in each of his three respective collegiate seasons. I think this is the year he takes home the crown.

We haven’t seen anyone in the Ivy League play in a year and a half. For that reason, this conference race should be all sorts of wild. Give me the best coach in that situation, which I believe is Harvard’s Tommy Amaker.

Give Rick Pitino more talent than everyone else in the MAAC and it’s over. That is exactly what has happened, too. Iona will be a team no one wants to face in the NCAA Tournament.

Sears was phenomenal as Ohio’s lead guard when Jason Preston was out. Now that he’s in that role full time, a breakout season is coming.

Morgan State hit the transfer portal hard and now has more talent than anyone in the MEAC. Norfolk State and NC Central will be in the title mix as well, but talent wins games. The Bears will get at least a share of the regular season title and/or the MEAC’s automatic bid.

Porter Moser and Cameron Krutwig are gone. However, much like we discussed with Winthrop, the Ramblers are still head and shoulders above the rest of a pretty good Missouri Valley. The culture is still in place with Drew Valentine at the helm so don’t expect Loyola to take a step back.

COLORADO STATE WINS A MW TITLE AND MAKES THE SWEET 16

The Rams return over 95 percent of their production from a team that went 20-8 a year ago, just barely missing the NCAA Tournament. Guard Isaiah Stevens (15.3 ppg, 5.4 apg, 4.5 rpg in 2020-21) and forward David Roddy (15.9 ppg, 9.4 rpg) spearhead an entertaining offense. As long as Colorado State remains steady after last season’s defensive leap (172nd in AdjD to 72nd), this team will be able to play with anyone.

Bryant was on the verge of making history last season before losing to Mount St. Mary’s in the NEC title game. It will break through this season with most of that rotation back.

Grayson Murphy and Nick Muszynski form one of the best mid-major duos in the country. The Bruins went 24-1 before falling apart down the stretch a season ago. Given their talent level and experience, I fully expect them to finish the job this time.

I’m stealing this one from my podcast co-host Connor Hope because he made excellent points. Mobley is extremely versatile and will be the guy for USC. He’ll have all the opportunity he wants while Johnny Juzang will have to split usage with Jaime Jaquez Jr. and Tyger Campbell.

This is probably the least bold of these predictions, but not every program can lose someone like Jordan Burns and keep humming. Colgate will do just that — though I don’t expect them to finish in the top 10 in the NET rankings again.

MISSISSIPPI STATE FINISHES THE SEASON AS A TOP-25 TEAM

The Paladins haven’t made the NCAA Tournament since 1980 despite knocking on the door each of the past several seasons under head coach Bob Richey. Furman will finally break through this season as Bothwell asserts himself.

The Colonels won the regular season title last year but were blown out by Abilene Christian 79-45 in the Southland Tournament title game. That will serve as added motivation for an experienced Nicholls team in a depleted eight-team Southland.

The Delta Devils have been one of the nation’s worst teams over the last decade, finishing in the bottom 20 of KenPom’s rankings every season since 2013. That might be the case again, but this group will find a way to avoid the conference cellar. Games against Arkansas Pine Bluff and Bethune-Cookman will be crucial in this regard.

ORU proved their Sweet 16 run was no fluke given its sustained level of play, and superstar Max Abmas is back. However, I fully expect Oral Roberts to really feel the loss of Kevin Obanor. There isn’t enough around Abmas to knock off South Dakota State and North Dakota State.

I don’t know if it’s at least a share of the regular season title or the Sun Belt Tournament title, but the Ragin’ Cajuns have as much talent (if not more) than anyone in the conference. Transfers Jordan Brown (Arizona), Antwann Jones (Memphis) and Greg Williams Jr. (St. John’s) will play major roles, yet the key may be the health of point guard Brayan Au.

This year is the year. All the talent is there and the Zags have been knocking at the door, playing in two of the last four national championship games. Baylor, Virginia and Villanova all had to get over significant humps before cutting down the nets in recent years. Now, it’s Gonzaga’s turn.