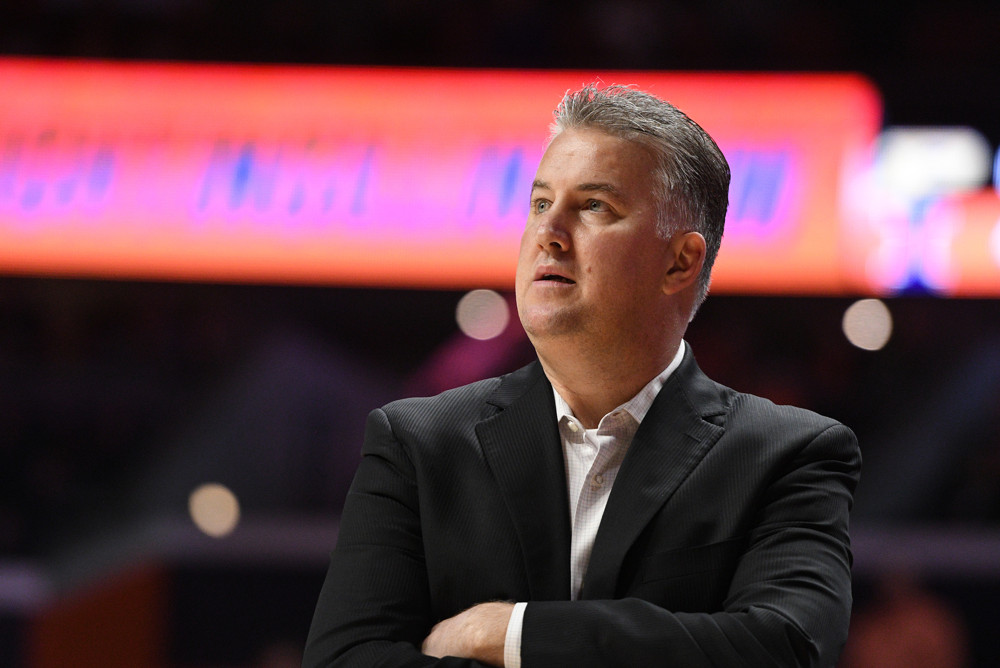 The Rauf Report details the biggest college basketball takeaways from the weekend, including a look at NC State and Purdue’s future.

While the Super Bowl was the biggest stage this weekend — congrats to the Los Angeles Rams on the win and to the NFL for finally putting on an awesome halftime show — there was plenty of meaningful college basketball action as well.

Three top 20 teams lost to unranked foes and even more were close — seven won their games this weekend by seven points or less. The schedule is only set to ramp up, too, now that football is over and college basketball takes center stage on the sports calendar.

We’re less than four weeks away from Selection Sunday, so teams are running out of time to correct mistakes or fix inefficiencies that are keeping them from reaching their full potential. I’m going to focus on a few of those in this Rauf Report but, first, we need to get to some coaching news as there will be another power conference job opening relatively soon.

I have been told by sources close to the situation that NC State is expected to part with head coach Kevin Keatts after the season, barring something unexpected.

The Wolfpack are just 10-16 on the year and 3-12 in ACC play, putting them in dead last in what has been a historically poor year for the conference. Saturday’s 71-69 loss to Pitt hammered home just how poorly this team is playing.

I’m told the continued downward trajectory of the program is the biggest reason for a potential move here. Keatts is in his fifth season at the helm, and after leading NC State to the NCAA Tournament in his first season, has failed to return. The Wolfpack have seen their record steadily decline each year following that tournament appearance, going from 24-12 in the 2018-19 season to 20-12 to 14-11 to 10-16 this season.

There’s also the matter of UNC and Duke undergoing coaching transitions of their own. The NC State administration acknowledges that there may be a window where both in-state powers are operating at less than full functionality as Hall of Famers step away for first time head coaches, and they want to be able to capitalize.

They have come to the realization that Keatts is not the coach who can do so. Athletic director Boo Corrigan recently came out and claimed that Keatts is “our guy” at NC State, but a source said that was something Corrigan “had to” say in an effort to get through the season. They’re not going to do what Illinois State did by already announcing the firing of their head coach Dan Muller, effective at the end of the season.

Who would the Wolfpack target to replace him?

While I don’t have inside knowledge on this aspect of things, I do know that Archie Miller was NC State’s top choice last time the job came open. Miller, who played for the Wolfpack from 1997-2002, quickly expressed interest elsewhere and ultimately landed the Indiana job. We all know how that ended, but Miller did have an outstanding resume at Dayton and proved he can recruit at a high level.

They will likely target some big names elsewhere and may be battling Louisville and Maryland for them. If NC State looks to the mid-major ranks, I expect College of Charleston’s Pat Kelsey and NC Central’s LeVelle Moton to be involved in some capacity.

I detailed Purdue’s defensive struggles in a Rauf Report a few weeks ago and discussed how its struggles on that end of the court, historically, have not led to good results. Only one team with a defense as poor as Purdue’s has ever made the Final Four — the 2003 Marquette team led by Dwyane Wade.

Purdue’s defense currently ranks 100th in the country, according to Torvik, a number that drops to 131st away from home. This week, we saw the Boilermakers get blown out in a 24-point loss to Michigan and pick up an unconvincing 62-61 victory over a bad Maryland team. Are these struggles a trend of things to come?

Using Torvik’s “Similar Profiles” tool, we were able to pull up the 10 teams in recent history that most closely match Purdue’s efficiency profile.

As you can see in the results, most of those teams disappointed in the NCAA Tournament. None of the 10 made it to the Final Four and only four made it past the first weekend. In fact, four were upset in the first round — including two No. 2 seeds that were upset by No. 15 seeds, something that has only happened nine times ever.

Those 10 teams have only averaged 1.3 wins in the NCAA Tournament, indicating that a first-weekend exit is more in play than Purdue fans may want to think.

The good news from this is that the team with the most similar profile is the 2015 Notre Dame team that made the Elite Eight and nearly ended Kentucky’s undefeated season before Wisconsin did so in the Final Four. That team was an offensive juggernaut led by a trio of stars (Jerian Grant, Pat Connaughton, Zach Auguste) much like the Boilermakers.

This Purdue team still has to write its own history, but the past tells us it might be an uphill battle for this group.

Indiana is on a three-game losing streak following Saturday’s 15-point loss to Michigan State, putting the Hoosiers at 4-5 in their last nine games with three of those victories coming against teams ranked outside the KenPom top 75. The only win came against Purdue which, as we just discussed, may not be as elite as we initially think.

The KenPom top 75 cutoff has been a telling sign for Indiana and its star big man Trayce Jackson-Davis.

The Hoosiers are just 3-7 in the 10 games they have faced against top 75 teams but are 13-1 against everyone else.

Jackson-Davis’ offensive production plays a big part in that split. Against lesser teams, the man nicknamed “TJD” is dominant and plays like an All-American. However, once that top 75 threshold comes into play, his production and efficiency have both dropped off.

There are legitimate reasons for this. Better teams typically have better defenses and, therefore, are more equipped to take TJD away. Everyone knows he is Indiana’s go-to guy and they adjust their defenses to stop him. Indiana also lacks consistent offensive options outside of Jackson-Davis, meaning opposing defenses don’t really have to respect anyone else.

Also, a majority of the top 75 teams Indiana has faced have been in the Big Ten, where big men dominate. Jackson-Davis is often matched up with other All-American candidates like Kofi Cockburn, E.J. Liddell and Hunter Dickinson. He typically draws the tougher matchups in those games.

At the same time, that’s why his play is so important. If Jackson-Davis can win inside — which he is talented enough to do — it gives the Hoosiers a huge advantage. Unfortunately, that hasn’t been happening enough in the biggest games of the season and Indiana is struggling as a result.

Only three of Indiana’s final six regular season games are against KenPom top 75 teams, though Rutgers might be one by the time they play. The Hoosiers should make the NCAA Tournament rather comfortably even if they don’t win any of those games.

That said, if Indiana wants to lock a bid up, it needs to win one of those key matchups, or at least play well in them. The Hoosiers will need Jackson-Davis to be at his best for that to happen.

Houston coming back down to earth

It felt like we were waiting for the proverbial other shoe to drop as soon as Houston announced in December that both Marcus Sasser and Tramon Mark, two of its best players, would miss the remainder of the season.

The Cougars fought it off for nearly two months, ripping off a 12-game win streak that resulted in a 9-0 start to conference play.

Then Kelvin Sampson’s squad faced the American’s other two best teams this week in SMU and Memphis, and Houston’s lack of firepower was finally exposed.

I wrote about how Sampson has done a phenomenal job adjusting Houston’s offense to focus more on the interior following those injuries to its backcourt, and it’s the kind of thing that has him right at the forefront of the National Coach of the Year race.

But we talk about guard play in college basketball for a reason. Those are the players who have the ball in their hands late in games and are tasked with making plays and the big decisions down the stretch. The Cougars were finally tested in two close games this week and gave away big leads both times.

The late-game struggles were starker against Memphis, which closed on a 21-6 run in the final five minutes in its victory at Houston.

Both times it was opposing guards that made the biggest plays late and Houston couldn’t answer. They will face each of these teams at least one more time each — SMU on Feb. 27 and Memphis on Mar. 6 — and it will be telling to see how the Cougars perform in those matchups.

But, if what we saw this week holds true, we were right about Houston’s ceiling being severely limited due to those injuries.

Arizona has proven it is an elite team and that isn’t in doubt. But this team has created a habit of starting slow, and that’s something that could come back to bite them in March.

There are 10 games listed there and the Wildcats are 8-2 in those games so, most of the time, Tommy Lloyd’s squad has been able to rally and get things back under control. They’re certainly a second-half team.

Gonzaga suffered from a similar problem with slow starts a season ago. At the time, I wrote about how that was the only thing remotely wrong with them, but it obviously ended up coming back to bite them in the national title game.

Just like with that Gonzaga team, I don’t know if these slow starts will end hurting Arizona or not in the NCAA Tournament. However, they have done this enough to indicate a trend. And, in the one game, do-or-die situation of the NCAA Tournament, one slow start may make all the difference in the world.