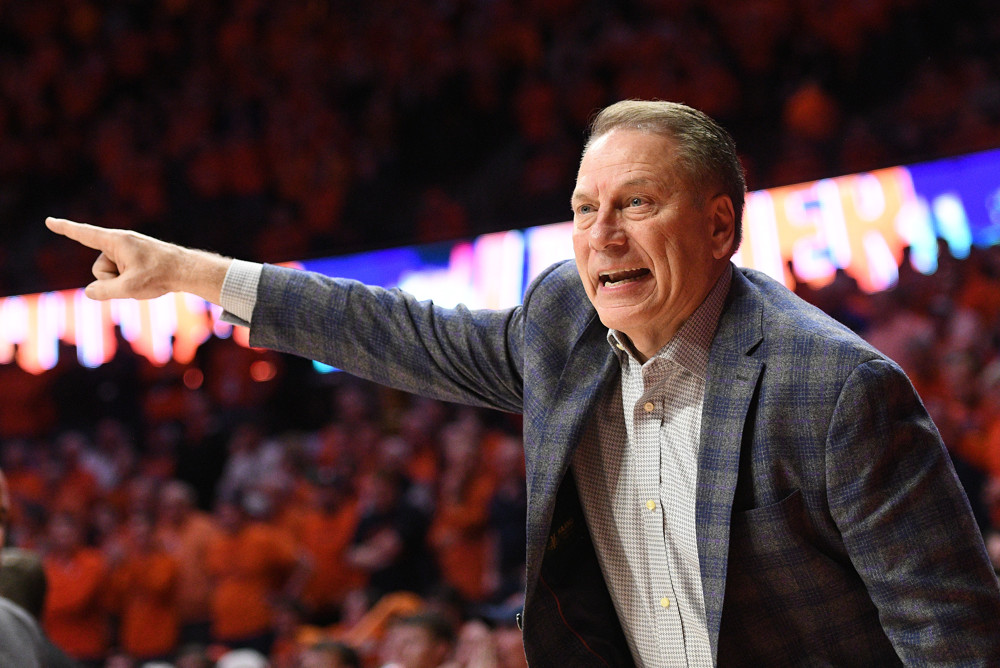 The Rauf Report details the biggest college basketball takeaways from the week, headlined by two teams struggling in the Big Ten.

It’s hard to believe that we’re approaching the end of the college basketball regular season, but many teams across the country will be playing their last regular season games this weekend before conference tournament play begins next week.

There were a handful of teams that made major statements this week. Arizona and Gonzaga keep rolling. UConn got a huge win over Villanova while Providence won a triple-overtime thriller against Xavier, putting the Friars in position to win the program’s first-ever Big East title. Murray State locked up an NCAA Tournament bid with its second blowout victory over Belmont.

However, not all statements made this week were of the promising variety. A few teams — including a couple in the Big Ten — are clearly headed in the wrong direction at the wrong time. That is where we’ll start this week’s Rauf Report.

Don’t believe in Michigan State — at all

A little over a month ago, Michigan State beat Minnesota by two on Jan. 12 to move to 14-2 on the season. The Spartans were heralded as one of the Big Ten’s best teams at the time and were the favorite to win a conference title.

However, there were signs it couldn’t last.

During Michigan State’s hot start — in which they rose to No. 10 in the country — the Spartans faced nine teams that currently rank outside the KenPom top 100 and only four that currently rank in the KenPom top 50. A number of those games against lesser competition were closer than they should’ve been and, after that 14-2 start, I laid out why Michigan State’s success felt like smoke and mirrors.

Turns out, I was right — but in a way that has me doubting if the Spartans can do anything at all in the Big Ten or NCAA Tournaments.

Their strength of schedule has obviously improved drastically as they’ve gotten into the heart of Big Ten play, and their play has suffered. Tom Izzo’s squad has not faced a team ranked outside the KenPom top 100 in the last 11 games (nor will they for the remainder of the season) and has faced seven teams in the KenPom top 50.

Michigan State’s production has fallen off a cliff since that Jan. 12 win over Minnesota as a result.

Why can’t the Spartans return to their early season form? There are a number of factors.

Gabe Brown has gone from an All-Big Ten performer to scoring in double digits just three times in this 11-game stretch. The lack of top-end talent/star power is a real concern, as is the wildly inconsistent and often poor guard play.

This is a team full of role players that needs a star or two to lead them.

Michigan State is firmly in the NCAA Tournament field, though it is fading quickly. Our Lukas Harkins projects them as a No. 7 seed in his latest bracketology update and the Spartans are trending in the wrong direction. While Izzo has a reputation for getting his teams to play at a high level in March, the Spartans have only made it out of the first weekend once since 2015.

Wherever Michigan State ends up on Selection Sunday, I will expect a very early exit if the Spartans continue playing like this.

Michigan State’s slide has caused it to lose five of its last six games. The lone win came in a 76-61 victory over Indiana, which has had a very poor February in its own right and is now on the wrong side of the NCAA Tournament bubble.

The Hoosiers had been a little inconsistent through the season’s first three months yet were in a good position thanks to a 16-5 record at the end of January. That record included victories over Ohio State and Purdue and had Mike Woodson‘s squad in position to make the Big Dance for the first time since 2016.

Indiana is 1-5 this calendar month with the only victory coming Thursday against a sub-.500 Maryland team. Four of the five losses have come against projected NCAA Tournament teams — three of whom are Top 25 teams — but the Hoosiers keep missing out on opportunities to further solidify their resume.

To make matters worse, Indiana led in the second half in all five games.

But at a certain point, Indiana’s offense goes into a shell and opponents take advantage. Trayce Jackson-Davis is a tremendous player but is limited — he’s shooting 32.3 percent on all shots outside the paint and rarely shoots with his right hand (he’s a lefty) — and the secondary scoring options simply haven’t been producing on a consistent basis.

It’s a trend at this point.

The victory over Maryland may indicate things are headed in the right direction. Xavier Johnson was awesome (24 points on 7-for-7 shooting with six assists) and the Terps never led. Indiana has an opportunity to build on that with its next two games coming against Minnesota and Rutgers before the regular season finale at Purdue.

The Hoosiers need to take care of business against the Golden Gophers and Scarlet Knights. Otherwise, their NCAA Tournament drought will continue.

Iowa State’s offense has been bad this season. Really bad.

The Cyclones rank 113th nationally in adjusted offensive efficiency, per KenPom, and rank outside the top 200 in 3-point shooting and turnover rate. I detailed how their poor perimeter shooting has led to subpar performances in conference play here.

But with an elite defense (top 10 in the country in efficiency), Iowa State just needs to be good enough offensively. Izaiah Brockington has singlehandedly been making that a reality of late.

Unsurprisingly, Iowa State is 3-1 during that four-game stretch with the only loss coming in overtime. This hot stretch was capped with a 35-point, five-rebound performance against West Virginia on Wednesday.

The Cyclones typically go as Brockington goes, particularly when it comes to his outside shooting.

Brockington is their best individual offensive player. When he’s drawing the defense’s attention like he can when he’s on, it helps open things up for everyone else. No one else in the Big 12 plays more minutes or has a higher shot rate. His offense is Iowa State’s best chance on that end, and it will determine how successful — or unsuccessful — the Cyclones will be in March.

But the Bruins have struggled of late, going 3-2 in their last five games as they’ve dealt with injuries to just about all their key players. These injuries have all been of the minor variety — miss a few games here, a game or two there, etc. — but it has given others the opportunity to show what they can do.

The 6-5, 195-pounder has stepped into the starting lineup each of the last four games and excelled. He scored 18 points with 11 rebounds, five assists, and four steals against Washington State, which he followed with 25 points against Washington and a 16-point, nine-rebound performance against Arizona State. All three games were victories for the Bruins.

On top of that, Clark might be UCLA’s most talented defender as well.

Foul trouble limited Clark to just 11 minutes in Thursday’s loss to Oregon, marking the first time he started and played fewer than 30 minutes. In the other four occasions — remember, he comes off the bench and averages around 20 minutes per game — the Riverside native is averaging 17.5 points, 7.3 rebounds, 2.3 steals, and 2.0 assists per game.

When given the opportunity, Clark has delivered.

This is extremely important when looking ahead to March and the NCAA Tournament. Johnny Juzang, Jaime Jaquez Jr., and Tyger Campbell will still be the Bruins’ core group and leaders. Knowing Clark can make a significant impact if any of those players struggle is huge.

Single-elimination tournaments don’t allow teams much margin for error. Clark’s emergence has given UCLA more of that by being a proven option.

The Mountain West is playing like a power conference

I have made my love for the Mountain West quite known throughout the season. I think Colorado State is a Sweet 16 team, and I’ve written about how good I think Boise State, San Diego State and Wyoming are in past Rauf Report columns.

Well, guess what? There’s actually some data to back up my observations!

As we pointed out on Twitter earlier this week, the Mountain West nearly has the same KenPom rating as both the ACC and Pac-12.

The top seven teams in the conference — the four I mentioned above plus Fresno State, UNLV and Utah State — all rank in the KenPom top 80 with six of them being top 60 teams.

The NET rankings love the conference, too. Those seven all rank in the NET top 90, six are in the top 70 and the “big four” are all in the top 40.

Contrast that to the ACC (one team in the NET top 40, seven in the top 90) and the Pac-12 (three in the top 40, six in the top 90), and you can make a legitimate case that the Mountain West is the fifth-best conference in the country.

Reminder — the Mountain West Tournament runs from Wed., March 9 through Sat., March 12, the day before Selection Sunday. It should be one of the most entertaining conference tournaments of Championship Week.