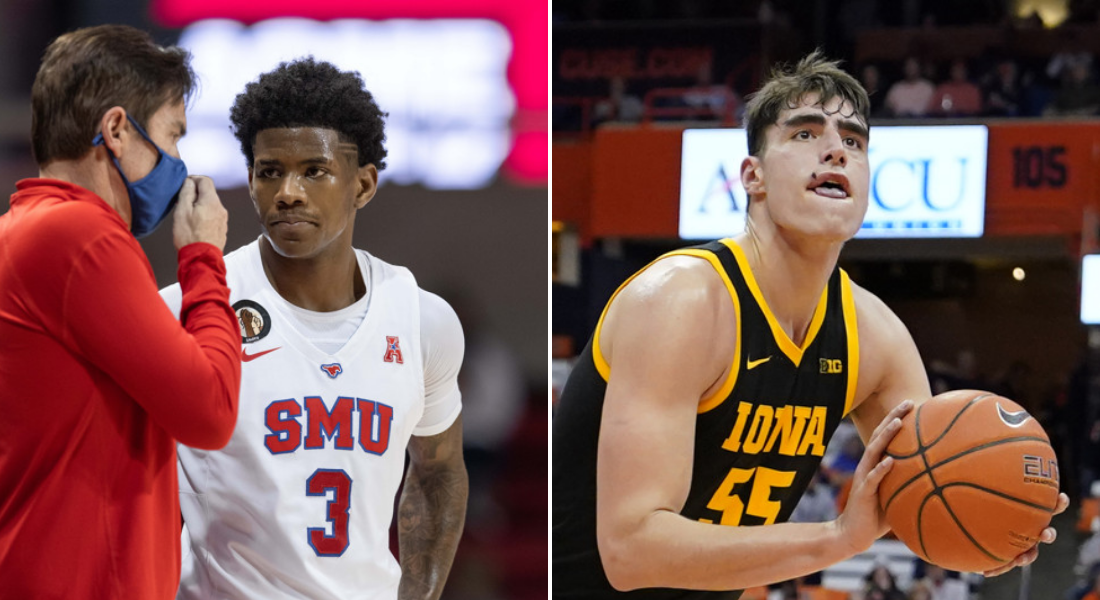 Now that we have a bit more than six weeks’ worth of basketball in the books, it’s high time we start taking a look at the larger picture developing. Of course, it should come as no surprise that the way I personally digest information is through charts and numbers. Still, there’s so much data out there, and it can be tough to know exactly what you’re looking at — and it can be almost impossible to the untrained eye to find anything useful if you don’t already know what you’re looking for.

One very helpful resource for slicing up all the numbers is BartTorvik.com. Bart Torvik does fantastic (and prolific!) work with his T-Rank metric and all the various gizmos and gadgets he makes available to the public at no cost. The most powerful of his tools, in my opinion, is his searchable, sortable, customizable Player Stats page. Like any tool, it can become a weapon of destruction if wielded without care; however, it can also provide some interesting insights into who is performing at high levels.

And that brings us to our first installment of the Arbitrary Threshold All-Stars, or “the Arthurs.”

What Torvik’s site allows for is the filtering of players based on just about any statistical criteria you could ask for (even height!). The result is a list of guys performing at the exact level that you’ve specified — and voila — you’ve got yourself a shortlist. That’s exactly what I’ve done here.

I created a few shortlists highlighting players who have performed in distinct roles this season. Rather than confine my search to the typical five-position definitions that are becoming increasingly passé in basketball circles around the world, I ideated a few roles that might be easier to capture using statistics alone. As noted in the title, the thresholds for determining the best players is mostly arbitrary. There are some guiding factors (mostly common sense), but usually the most important factor in determining a threshold is just how much it cuts down the list.

(Yeah, I know it’s not the most scientific thing in the world. But that’s OK! It’s meant to be fun, not fact. As is the mantra here at The Gradebook, we never believe any single stat, number, chart, or graph is ever going to tell the full story — but these numbers all do help tell a story. Think of this more as a sorting tool than a ranking tool, if that helps at all.)

So with that in mind … sit back, have fun, and find out if one of your guys made the cut!

As you might imagine, these players are relied upon to be the (or at least a) focal point of the offense when they are out on the floor — and they almost always reward their coaches and teammates for that trust. Is it any shock that the frontrunner for National Player of the Year, Luka Garza, is headlining this list?

What is interesting, though, is how few players come from Power 5 conferences. Besides Garza, only Hunter Dickinson of Michigan hails from one of these power-brokers, and Drew Timme of Gonzaga is hardly unsung regardless of his school’s affiliation with the WCC. Kendric Davis of SMU has gotten some love recently around these parts, but his status as a household name nationwide is still pending. Roman Penn has been one of the chief architects of Drake’s hot start, but Isiaih Mosley is trying to lead a charge to challenge the Bulldogs in the MVC.

Outside of the high-majors and better-known mid-majors, a few interesting names pop up, along with some eye-popping numbers:

These players may not lead the team in scoring every night, but they can be relied upon to facilitate the offense and not make too many mental mistakes. This list — and the rest of the Arthur lists from here on out — is made up of only five players, which (maybe?) makes it a more prestigious club. It shouldn’t be too shocking to see Collin Gillespie here, as he’s become something of an extension of Jay Wright on the floor.

We also have our old friend JaQuori McLaughlin making his aforementioned second appearance here, registering the highest assist rate of anyone on the Floor General list. On the other hand, he’s barely squeezing under the 10% turnover limbo bar, as is Carter Collins of Davidson. Collins has been a bit of an unsung piece for the Wildcats behind more heralded players like Kellan Grady and Hyunjung Lee, but he’s been a critical piece of the puzzle. One of McLaughlin’s Big West compatriots, Darius Brown II of CSUN, also makes the list thanks to his 4.7-to-0.7 assist-to-turnover ratio.

But perhaps nobody is putting it all together more than Bowling Green’s Justin Turner. The two-time All-MAC star is averaging 20.9 points, 5.3 assists, and 3.9 rebounds per game, while turning the ball over on just 7.7% of possessions at 29% usage — by far the highest rate of the five players shown here. He can join my team any day.

(NOTE: Johnny McCants of New Mexico State technically qualifies for this list, but in only one game. So all he gets is an honorable mention… for now.)

Sure, just about every team in the country has at least one guy that they can point to and say, “Oh yeah, that’s our shooter.” But then there are the true specialists, the guys who do almost nothing besides shoot from distance — and with good reason. And they aren’t just bench shooters, either! Players on this list are on the floor for the majority of the game, and they have the automatic green-light due to the fact that they’re knocking down more than half of their three-point attempts.

It is interesting that there are no “Power 6” players in this category, though we do get our biggest whiff of high-major off of Temple’s Brendan Barry. In case you’re wondering — yes, he’ s part of that Barry family, although not an immediate relative of Rick or Brent or even Jon. Still, the former Dartmouth standout is having a heck of a comeback following an injury that kept him out all of his senior year for the Big Green. Barry is averaging 31 minutes per game off the bench, and he has hit 14 of 25 three-pointers to start off his career for the Owls.

Staying in the Keystone State for a moment, Jon Williams of Robert Morris has been exceptionally hot in the first few games of his senior campaign. Over his past three games, Williams has shot an absurd 14-for-21 from beyond the arc. Further to the northeast, Hartford’s DJ Mitchell has carved out a very specific role for himself in the Hawks’ offense. The junior guard is 29-for-53 in 13 games this year (four stars), but despite averaging over 23 minutes per game and leading the team in offensive efficiency, he actually has the lowest usage rate on the team at just 13.6 percent.

Down south, we’ve got sharpshooter Fletcher Abee playing just about every minute in The Citadel’s still-perfect season and knocking down shot after shot. In four games against D1 opponents, Abee is averaging 16.5 points and four made three-pointers per contest. Treading back east a bit, Chris Shelton has been lighting it up for Hampton in his sophomore campaign. Shelton is second on the team in scoring behind certified bucket Davion Warren, and his 40-for-79 start from deep is why.

I’d be lying if I said there was a player prototype that speaks to me more than the Brick Wall. I love the old-school, hard-nosed, big men who swat shots and shut down the paint — regardless of whether they back it up on the other end. This shortlist highlights players who are equal parts yeoman and Yao Ming.

We’ve got a couple Power 5 players showing up at the top of this list, though they’re at completely opposite points in their respective careers. Kentucky freshman Isaiah Jackson has been a consistent bright spot on defense in a Wildcats season that has been up-and-down, to say the least. Jackson’s emergence as a defensive stalwart will be a huge part of any success UK has going forward. In the ACC, Virginia’s Jay Huff is doing what he’s always done: patrol the paint and send away all comers. He’s established himself as one of the game’s premier defensive big men over the past few years, and he’s further cementing that legacy in 2020-21.

Other players building on impressive defensive resumes are Neemias Queta and KC Ndefo. Queta was the Mountain West Defensive POY in 2018-19 before taking a step back last year after a summer injury in FIBA play. (To be fair, he still made the All-MWC Defense team.) But he’s ratcheting back up to his freshman-year numbers, and that’s a scary prospect for Mountain West foes. For his part, Ndefo is looking to repeat as MAAC Defensive POY after taking home the award last year, but he’ll get some stiff competition from Seth Pinkney, who is breaking out a bit in his sophomore season at Quinnipiac.

In case it hasn’t yet become clear, these “Arthurs” are supposed to be fun. I know people like to think of analytics as boring, but come on — we think dunks and threes are the best shots, too! So instead of fighting about mid-range jumpers, let’s just hug it out and revel in these guys who are giving all of us the excitement (and data points) that we crave.

Notice a trend here? With one exception — a likely NBAer, mind you — all of these players are suiting up for high-major programs. If you really want excitement, just watch Sandro Mamukelashvili and Jared Rhoden do their thing for Seton Hall! (This is the only pair of teammates to appear in the same ‘Arthur’ shortlist here, by the way.) You’ve also got Jaylin Williams providing highlight-reel dunks and threes for Bruce Pearl, while CJ Felder is doing his best to help BC keep its head above water in the choppy waters of the ACC.

Back to that future pro, though. Derrick Alston Jr. has had a few quiet games for Boise State on the early season, but he has also completely exploded a few times. The preseason Mountain West POY pick, Alston has shown extended flashes of his brilliance early on. The big difference for Boise State this year, in comparison to years past for Alston and Co., is that the Broncos’ supporting cast is stepping up night in and night out.

That’s great news for all of us, because it means Alston can continue to focus on wowing us all with his highlight reel dunks, like this one:

Check back for more periodic updates to these shortlists, and let us know on Twitter (@HeatCheckCBB, @TheDPIGradebook) if you’ve got ideas for other categories!