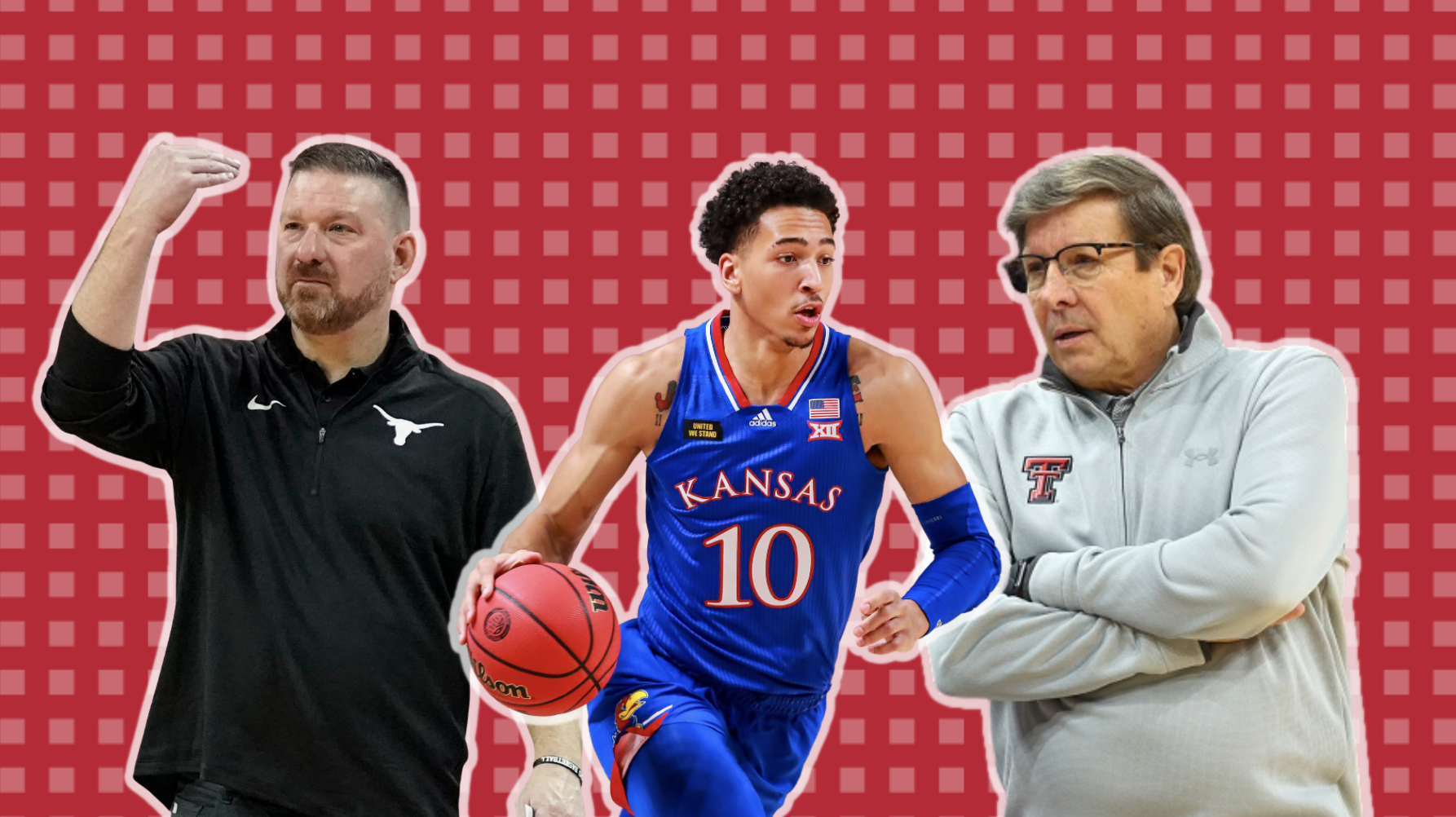 Big 12 basketball has been the best conference in the sport over the past decade, and that dominance won’t stop in 2022-23.

Big 12 basketball has been the sport’s gold standard over the last decade.

The conference has sent a team to the national championship game in each of the last three NCAA Tournaments with Kansas and Baylor winning the last two. It has ranked as a top-2 conference in the nation by KenPom every year since the 2013-14 season, taking the top spot in seven of those nine years.

The 2022-23 season projects to be no different. Five teams — half of the conference — currently rank in the top 16 in our Way-too-early Top 25 rankings, and another four have legitimate NCAA Tournament aspirations going into the new year. No other conference matches the Big 12’s quality depth and the upcoming season might be a banner year in that department.

How does the league project to shake out for the 2022-23 season? Here’s an early preview:

10. Kansas State: New head coach Jerome Tang has an uphill battle ahead of him in Year 1. The Wildcats are replacing three starters from a team that finished 9th in the league last season and will be relying on youth to prove depth. Expect everything to go through 5-foot-8 senior Markquis Nowell.
9. Iowa State: The Cyclones are coming off a surprise Sweet 16 appearance and should have an elite defense, especially after landing St. Bonaventure transfer and shot-blocking extraordinaire Osun Osunniyi. That said, Iowa State’s offensive struggles might get worse after losing Izaiah Brockington (pros) and Tyrese Hunter (transfer). The Cyclones will need another St. Bonaventure transfer, Jaren Holmes, to step up in a huge way.
8. Oklahoma State: The Cowboys fell short of expectations last year, though it’s fair to wonder how much their postseason ban played a role. With no restrictions on their ambitions this year, Oklahoma State fans are hoping for that breakthrough. If it comes, it’ll be because Avery Anderson III or Bryce Thompson (or both) become reliable go-to scoring options.
7. West Virginia: West Virginia hit the transfer portal hard and came away with some impact players, namely former Texas and UMass big man Tre Mitchell. This rotation projects to be almost entirely full of newcomers, but that’s not necessarily a bad thing given the talent upgrade that came along with it.
6. Oklahoma: Porter Moser narrowly missed the NCAA Tournament in his first season in Norman, but it doesn’t look like he’ll miss it again. Both Tanner and Jacob Groves return along with Jalen Hill, but the arrival of Nevada transfer Grant Sherfield gives the Sooners a legit star and one of the better players in the Big 12. Oklahoma will go as far as Sherfield takes it.
5. Texas: Expectations are high in Austin. A number of last season’s star transfers — namely Timmy Allen and Marcus Carr — unexpectedly returned for another season. Add in an impact transfer (Tyrese Hunter) and two five-star prospects (Dillon Mitchell, Arterio Morris) and you have a program that can compete for a conference title.
4. Texas Tech: Texas Tech has been an oasis for transfers over the past several years, and head coach Mark Adams has kept that going. De’Vion Harmon (Oregon) and Fardaws Aimaq (Utah Valley) project to have major roles, though the Red Raiders’ best player might be Kevin Obanor, who really settled into his role during the second half of last season.
3. TCU: The Horned Frogs are one of the coming season’s trendy breakout picks, and rightfully so. They nearly upset Arizona in the second round of the NCAA Tournament and return a major portion of that team, headlined by star point guard Mike Miles Jr. This veteran team should boast one of the nation’s toughest defenses again but its key to success will be cutting down on turnovers.
2. Kansas: The reigning national champions are reloading in true Kansas fashion. Yes, conference player of the year and Final Four MOP Ochai Agbaji is gone, but in comes a top-5 recruiting class with three top-30 prospects, headlined by five-star wing Gradey Dick. Expect Jalen Wilson and Texas Tech transfer Kevin McCullar to step into large roles, too.
1. Baylor: The 2021 national champions expect to be in that mix again. LJ Cryer and Adam Flagler return to give the Bears one of the best backcourts in the country, which five-star freshman Keyonte George will only elevate.

West Virginia: The Mountaineers’ last-place finish in the Big 12 last season wasn’t exactly a surprise given who they were trying to replace, but I don’t think anyone expected them to go 3-15 over their last 18 games. There is still a solid base in Morgantown, but head coach Bob Huggins went out and got some needed top-end talent in the transfer portal. Tre Mitchell was lost in a crowded rotation at Texas but was dominant at UMass and should be the go-to scorer this team needs. If he hits, and fellow transfers Jimmy Bell and Joe Toussaint produce in bigger offensive roles, West Virginia should return to the NCAA Tournament.

Eddie Lampkin, TCU: Speaking of the NCAA Tournament, Lampkin gained a lot of fans with his play in TCU’s near upset of Arizona in the second round. He scored 20 points and had 14 rebounds against Arizona’s front line and famously told 7-foot-1 center Christian Koloko he was “too small” to guard him. Lampkin gradually saw his minutes — and role — increase as he got in better shape, but he was productive whenever he was on the court, ranking in the top 10 in the Big 12 in offensive rating, rebound rate, and 2-point shooting percentage. Assuming his progress continues — Lampkin lost 70 pounds in his first offseason in Fort Worth — Lampkin could be a star on the inside for the Horned Frogs.

Keyonte George, Baylor: Baylor lacked a true go-to scorer last season. That won’t be the case in 2022-23 thanks to George, who might be the best pure scorer in the incoming freshman class. He can score from all three levels and create for himself off the bounce but does so in a way that comes within the flow of the offense. His ability to produce and take over without being a ball-stopper makes him even tougher to defend — and makes his team more successful. Expect George to immediately step into the starting lineup and be one of Baylor’s most indispensable pieces.

Tyrese Hunter, Texas: An in-conference transfer, Hunter emerged as one of the best perimeter defenders in the country as a freshman for Iowa State while ranking 40th nationally in assist rate and second on the team in scoring. He showed major flashes of his dominance with a 23-point performance in Iowa State’s victory over LSU in the first round of the NCAA Tournament. Hunter projects to start alongside Marcus Carr for the Longhorns and should have a similar two-way impact, potentially giving Chris Beard one of the best backcourts in the conference.

Jalen Wilson, Kansas: A Kansas player has won this award six times in the last 12 years, including four times in the last six years. Five of the other six years, an eventual lottery pick — Marcus Smart, Buddy Hield (twice), Jarrett Culver, Cade Cunningham — won it over a Kansas player. Only two players in the conference are currently projected to be surefire first-round picks in the 2023 NBA Draft, and both are freshmen: Baylor’s George and Texas’ Dillon Mitchell. Wilson is arguably the best returning player in the conference and should step into a lead role in Kansas’ offense following the departure of Ochai Agbaji and David McCormack. That, coupled with what history tells us, makes us believe that Wilson enters the season as the guy to beat.