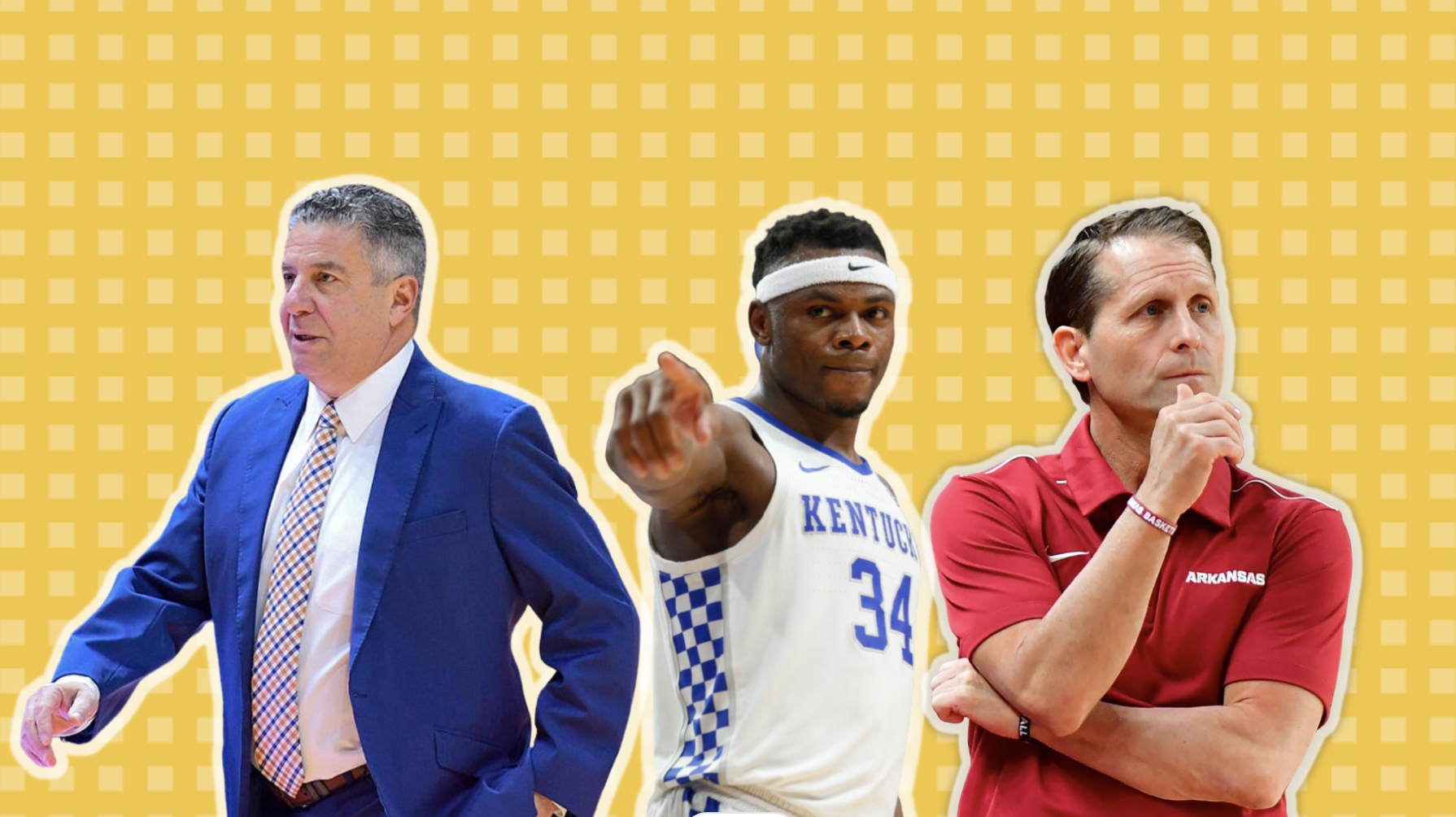 The strength of SEC basketball is at an all-time high thanks to an elite top tier and improved depth. How will the conference look in 2022-23?

SEC basketball experienced more than its fair share of turnover on the sidelines this offseason with six jobs — nearly half the league — undergoing changes. Florida, Georgia, LSU, Mississippi State, Missouri and South Carolina all have a new man in charge hoping to lead their respective programs to the top of the conference.

Cracking into that top group this year, though, will be extremely difficult as the SEC boasts as many top teams as any league in the country.

Auburn and Alabama are both bringing back key pieces and have retooled via the transfer portal. Meanwhile, Arkansas landed the nation’s No. 2 recruiting class and Tennessee returns much of the core that won the SEC Tournament in March.

Of course, even those four may still be looking up at Kentucky, which returns the National Player of the Year in Oscar Tshiebwe and welcomes two top-15 freshmen.

How does the league project to shake out for the 2022-23 season? Here’s an early preview:

14. Georgia: Mike White left Florida to replace Tom Crean as Georgia’s head coach, but he has an uphill battle ahead of him. The Bulldogs should boast a better defense than a year ago (318th, per KenPom) but may have trouble producing offense outside of Kario Oquendo. Transfers Mardrez McBride (North Texas) and Terry Roberts (Bradley) will need to play a big role.
13. South Carolina: The Gamecocks also sport a new head coach with Lamont Paris taking over for Frank Martin, who failed to return to the NCAA Tournament after South Carolina’s Final Four appearance in 2017. This was set up to be a rebuilding year in Columbia anyways, but Paris is hoping a strong transfer class led by Hayden Brown (The Citadel), Ebrima Dibba (Coastal) and Meechie Johnson (Ohio State) can keep the Gamecocks competitive in conference play.
12. Vanderbilt: Losing a two-time First Team All-SEC player like Scotty Pippen Jr. will undoubtedly hurt the Commodores, though Jerry Stackhouse has built up enough to keep Vandy from returning to the SEC basement. Expect wings Myles Stute and Jordan Wright to produce solid numbers with increased roles.
11. Ole Miss: Kermit Davis enters his fifth season in Oxford on the hot seat as the Rebels haven’t made the NCAA Tournament since 2019, posting two losing records during that time frame. Former McDonald’s All-American Daeshun Ruffin showed flashes last year and, if he can stay healthy, he’ll give this group a needed go-to guy.
10. Missouri: Former Cleveland State head coach Dennis Gates has quickly improved Mizzou’s roster in his first couple of months on the job, though no addition was greater that Missouri State’s Isiaih Mosley. The 6-foot-5 guard is one of the best and most efficient scorers in the country, finally giving the Tigers are legitimate go-to option. If some of their other transfers hit, Missouri could capitalize on a weak bottom half of the league.
9. Mississippi State: The Bulldogs failed to make the NCAA Tournament under Ben Howland, but the cupboard is far from bare for new head coach Chris Jans. DJ Jeffries, Shakeel Moore and Tolu Smith all return to provide a solid nucleus for a Mississippi State team that needs to find reliable depth in order to contend for a postseason berth.
8. LSU: There was one point this offseason when LSU did not have a scholarship player on the roster. A mass exodus followed Will Wade’s firing, leaving the door open for new head coach Matt McMahon to bring in a number of high-quality transfers — several of whom followed via Murray State. KJ Williams, last year’s OVC Player of the Year, is one of the former Racers and should anchor a solid Tigers team.
7. Texas A&M: The Aggies had their breakthrough in head coach Buzz Williams‘ third season, advancing to the SEC Tournament championship and NIT championship. Texas A&M will have to improve offensively to take the next step, and the progression of players like Tyrece Radford and Henry Coleman — plus the addition of Wichita State transfer Dexter Dennis — could be the keys.
6. Florida: Florida might look like the Transfer All-Stars under new head coach Todd Golden. Since taking over for White, Golden landed three of the better transfers available in Kyle Lofton (St. Bonaventure), Will Richard (Belmont) and Alex Fudge (LSU). Getting both Colin Castleton and Myreon Jones to return as 5th-year seniors gives the Gators a solid floor.
5. Tennessee: Now we’re starting to get to the cream of the crop in the SEC. The Vols have to replace Kennedy Chandler and John Fulkerson but the other pieces vital to last season’s success — Josiah-Jordan James, Santiago Vescovi and Zakai Zeigler — are all back. If five-star prospect Julian Phillips delivers on the wing, Tennessee will compete for another SEC title.
4. Alabama: The Crimson Tide are hoping to bounce back from last season’s disappointing first-round NCAA Tournament exit. A star-studded perimeter led by Jahvon Quinerly and Nimari Burnett only improved with the transfer additions of Dominick Welch (St. Bonaventure) and Mark Sears (Ohio). If Nate Oats can find enough interior production, Alabama will be dangerous again.
3. Auburn: The Tigers are coming off their second SEC title in five years. While they have to replace potential No. 1 pick Jabari Smith, all four guards that saw significant playing time last season return. Morehead State transfer Johni Broome should pick up the slack inside alongside another star freshman in Yohan Traore.
2. Arkansas: The Razorback fanbase has been waiting for this group. Following back-to-back Elite Eight appearances, head coach Eric Musselman is bringing in the nation’s No. 2 recruiting class headlined by five-star prospects Nick Smith, Anthony Black and Jordan Walsh. With Davonte Davis returning and a plethora of impact transfers like Ricky Council IV (Wichita State) and Jalen Graham (Arizona State), Arkansas has the talent and depth to play with anyone in the country.
1. Kentucky: While the Wildcats were the first victim of Saint Peter’s magical Elite Eight run, there is reason to believe Kentucky will be better than its 14-4 conference record a year ago. Oscar Tshiebwe and Sahvir Wheeler both return and are arguably the best players at their respective positions in the conference. More talented freshmen are joining the mix in the form of top-15 prospects Chris Livingston and Cason Wallace. With improved shooting off the bench from CJ Fredrick and Antonio Reeves, Kentucky may return to the SEC mountaintop.

Florida: The Gators made the second round of the NCAA Tournament four times in the last five years, but after missing the Big Dance last season — and with the stench of underachieving on his tenure — former head coach Mike White opted to leave for Georgia. New head man Todd Golden has stepped in and quickly revamped this roster via the transfer portal. If the perimeter trio of Lofton, Richard and Fudge all hit, Florida will be a top 25 team capable of beating anyone else in the conference.

Zakai Zeigler, Tennessee: With Kennedy Chandler now in the NBA, Zeigler is stepping right into a larger role as Tennessee’s full-time point guard. The 5-foot-9 sophomore proved to be an excellent defender last season, leading the conference in steal rate and emerging as a consistent scorer later in the year. Expect the Long Island native to blossom in a bigger role and be one of the best guards in the conference.

Nick Smith, Arkansas: Speaking of point guards, Smith will likely be tasked with that role for the Razorbacks. The highly touted freshman — a consensus top-five prospect — is more of a combo guard than a true point, but he can create for himself effectively and efficiently at all three levels while displaying terrific passing. He fits Arkansas’ defensive strategy, too, with length and energy. Musselman has a lot of mouths to feed with this talented roster, but Smith will be the leader of it all.

KJ Williams, LSU: There were a number of significant transfers into the SEC, including Johni Broome going to Auburn, Mark Sears landing at Alabama, and Isiaih Mosely opting for Missouri. But no team will benefit from transfers more than LSU and no player will have a greater impact than Williams. The star big man was the OVC Player of the Year for Murray State thanks to his strength, mobility and touch on the offensive end. At 6-foot-10 and 245 pounds, he should be able to dish out punishment in the SEC while producing as LSU’s go-to offensive option.

Oscar Tshiebwe, Kentucky: Incredible that we’re picking the reigning SEC and National Player of the Year to win this award, huh? We haven’t seen rebounding dominance like Tshiebwe’s in decades, and his expanding offensive presence has created as big of an impact as any player in the country. Tshiebwe’s style isn’t flashy but it’s incredibly productive and efficient.